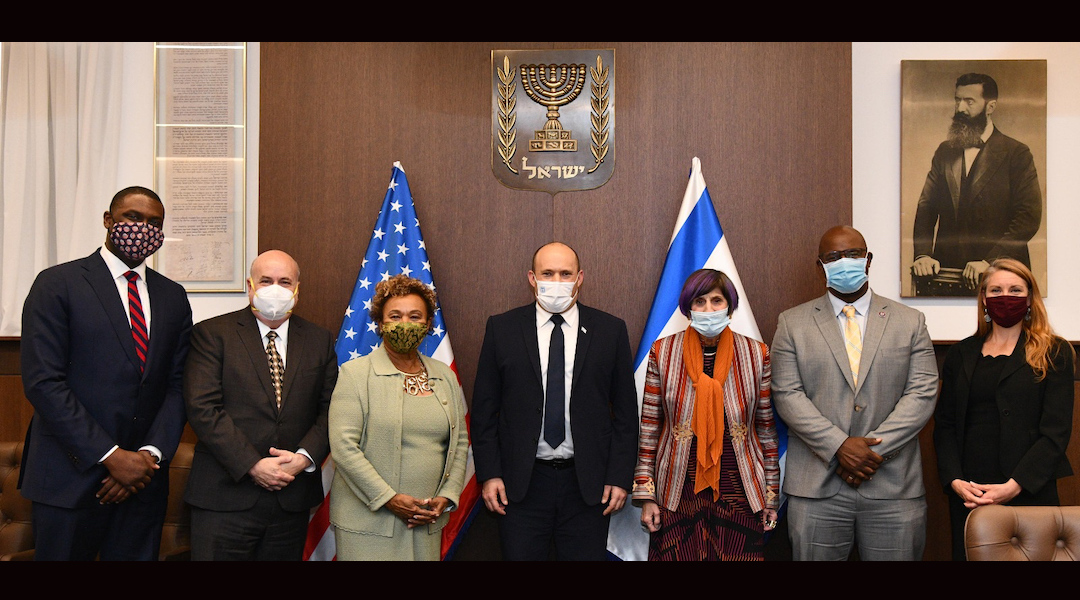 (New York Jewish Week via JTA) — Ever since he entered Congress this year, Rep. Jamaal Bowman has tried to walk a fine line between those who support Israel and its fiercest critics.

Yesterday, he got a signal that his balancing act was working: The Democratic Socialists of America — which endorses the Boycott, Divestment and Sanctions movement against Israel, or BDS — opted not to expel Bowman for a trip he took to Israel last month with the liberal Israel lobby J Street.

Activists in the DSA had called for Bowman to be expelled for the trip, in which he met with Israeli Prime Minister Naftali Bennett, as well as for his recent vote to give Israel supplemental funding for its Iron Dome missile defense system. (The trip also took Bowman and his colleagues to Palestinian areas of the West Bank.)

But in a statement, the DSA’s leadership said that it would not expel Bowman because, in the big picture, it sees him as an advocate in Congress for Palestinian rights and against what it calls the “Zionist lobby.”

The group said it “strongly condemns” Bowman’s trip and Iron Dome vote. But it added that Bowman has “continued to criticize the Israeli government, while challenging his constituents to recognize Israel’s roots in the Nakba for Palestinians.” (“Nakba” is the word meaning “catastrophe” that Palestinians use to refer to Israel’s creation, when many Palestinians were expelled from Israel or fled and were prevented from returning.)

“We recognize the threat that Bowman and other members of the squad pose to the Zionist lobby and the important role DSA can play with them in advancing Palestinian rights and anti-imperialist struggle at the federal level,” the statement said, adding that the DSA would not endorse Bowman in next year’s Congressional election “unless he is able to demonstrate solidarity with Palestine in alignment with expectations we have set.”

The statement came after other activists, including the global BDS Movement, defended Bowman. The BDS Movement, in a statement that did not name Bowman, nevertheless said, “Partners are best positioned, we believe, to decide their objectives and strategies according to their context’s nuances and political particularities, while upholding the movement’s principles.”

Bowman represents parts of the Bronx and Westchester, including neighborhoods with large Jewish communities, and has sent a range of signals on Israel in the 11 months he’s been in office. He has sponsored legislation to place conditions on aid to Israel, but voted for the Iron Dome funding. He’s sent out a fundraising pitch for IfNotNow, the left-wing Jewish group that frequently allies with BDS supporters, but also works with J Street. He has also met repeatedly with the Israeli consulate in New York.

He doubled down on taking the Israel trip in a Q-and-A with a group of college students this week, when he endorsed the establishment of a Palestinian state alongside Israel and said Israel has a right to defend itself. He expressed a desire to return to the country and he also criticized Israeli leadership, including Bennett, for opposing the establishment of a Palestinian state.

“Working with Israeli activists on the ground is really, really important because I’m telling you, I felt it,” he said at the event on Monday. “There was this, ‘Y’all aren’t over here, y’all in America, y’all can’t tell us what to do’ kind of vibe coming from some of the leaders that we met with.”