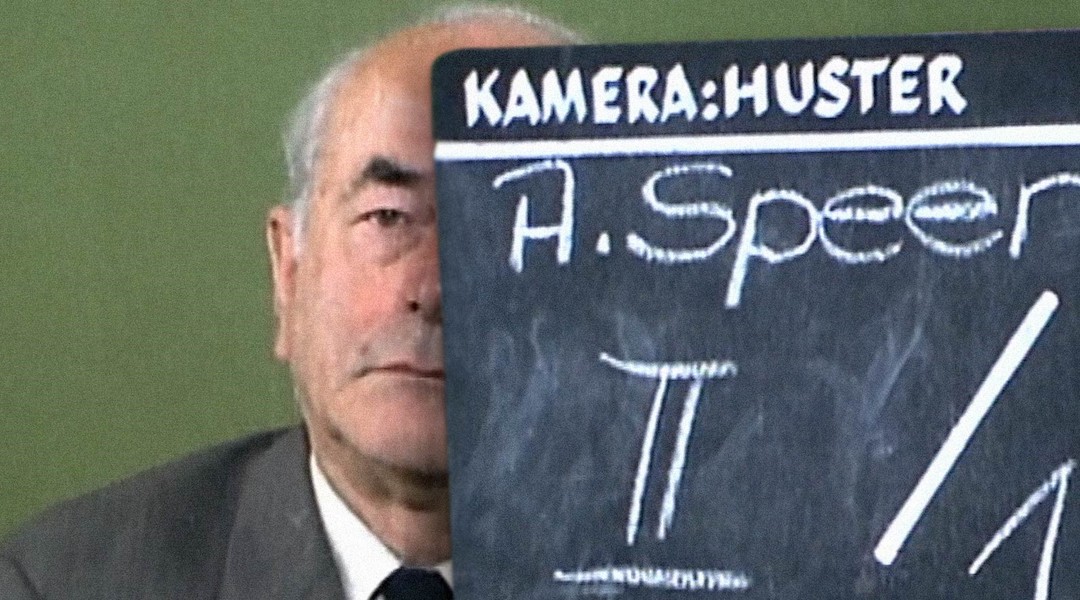 (JTA) — A screenwriter who worked with Albert Speer to try to turn the infamous Nazi architect’s life into a movie is charging that an award-winning Israeli documentary about Speer makes significant ethical lapses in its use of archival material.

Andrew Birkin, the British screenwriter who attempted to adapt the Nazi’s memoir into a film in the 1970s, is featured prominently in “Speer Goes to Hollywood,” which was released in the United States this month, via staged recreations as Speer’s conversation partner.

In an exchange with Glenn Kenny, a critic with RogerEbert.com, Birkin alleges that the film’s director, Vanessa Lapa, distorted or falsified aspects of his recorded conversations with Speer in ways that create the impression Birkin himself is antisemitic. New interviews that Birkin said he conducted with Lapa were not included in the film.

The documentary is primarily composed of conversations between Birkin and Speer as the two of them attempted to hash out what a movie based on Speer’s life might look like. A central tension in the documentary is Speer’s denial that he knew anything about the Final Solution, the Nazis’ plans for a genocide of the Jewish people, even as he worked alongside Hitler and appeared to have been present at key meetings and speeches where the Final Solution was discussed.

In the film, Birkin attempts to incorporate these elements into his script, but receives pushback from Speer.

Though the conversations between Birkin and Speer were recorded, and Birkin claimed the recordings were in good condition (along with the Forward, which reviewed the tapes), “Speer Goes To Hollywood” doesn’t use their original archival tape. Instead, Lapa cast voice actors to portray the two men, and, according to Birkin, allegedly inserted lines Speer had said to other people into his chats with Birkin. Birkin told RogerEbert.com that the restaged conversations misrepresented his interactions and made it appear that he had acquiesced to various antisemitic statements made by Speer in other contexts.

Lapa “has imported quotes from Speer that he apparently said elsewhere, but not to me, and has therefore had to invent questions and responses from me that I naturally did not make,” Birkin wrote in a comment on the film’s IMDb page. “Many of these quotes do not matter to me, but when Speer is heard to spout anti-Semitic remarks, it reflects badly on me that I don’t take him to task.”

Birkin, who is working on his own memoir about his interactions with Speer, does admit to one quote of his that made the movie — his reference to “the Jewish brigade” of motion-picture executives who wouldn’t allow a movie sympathetic to a Nazi to be made. “It was poor wording on my part,” he told Kenny while also defending his general description of Paramount.

Lapa responded to Birkin’s allegations in an emailed statement to Kenny and the Forward.

“It was never our intention to make a film about Andrew Birkin and we have always indicated that. What takes place on screen is how Speer was, what he intended and how he behaved,” she wrote. She did not directly address Birkin’s claims that elements of his conversations with Speer had been falsified for the film; in earlier publicity interviews for the film, Lapa had stated that “everything that you hear, the laughs, the breath, the poses is 100% accurate to the original recording.”

Lapa’s methods were also criticized by Oscar-winning documentarian Errol Morris, who has directed his own short film about Speer. Morris had briefly been in conversation with Lapa about working together on her film before the two filmmakers had a falling-out.

“We are presented with a grotesque over-simplification and a falsification. … Having been presented with an opportunity to add to our knowledge of Speer, she instead subtracts from it,” Morris said of Lapa in an email to RogerEbert.com.

“Speer Goes To Hollywood” won the 2021 Ophir Award, the Israeli equivalent of the Oscars, for Best Documentary and was screened at the Berlin Film Festival prior to its U.S. release.