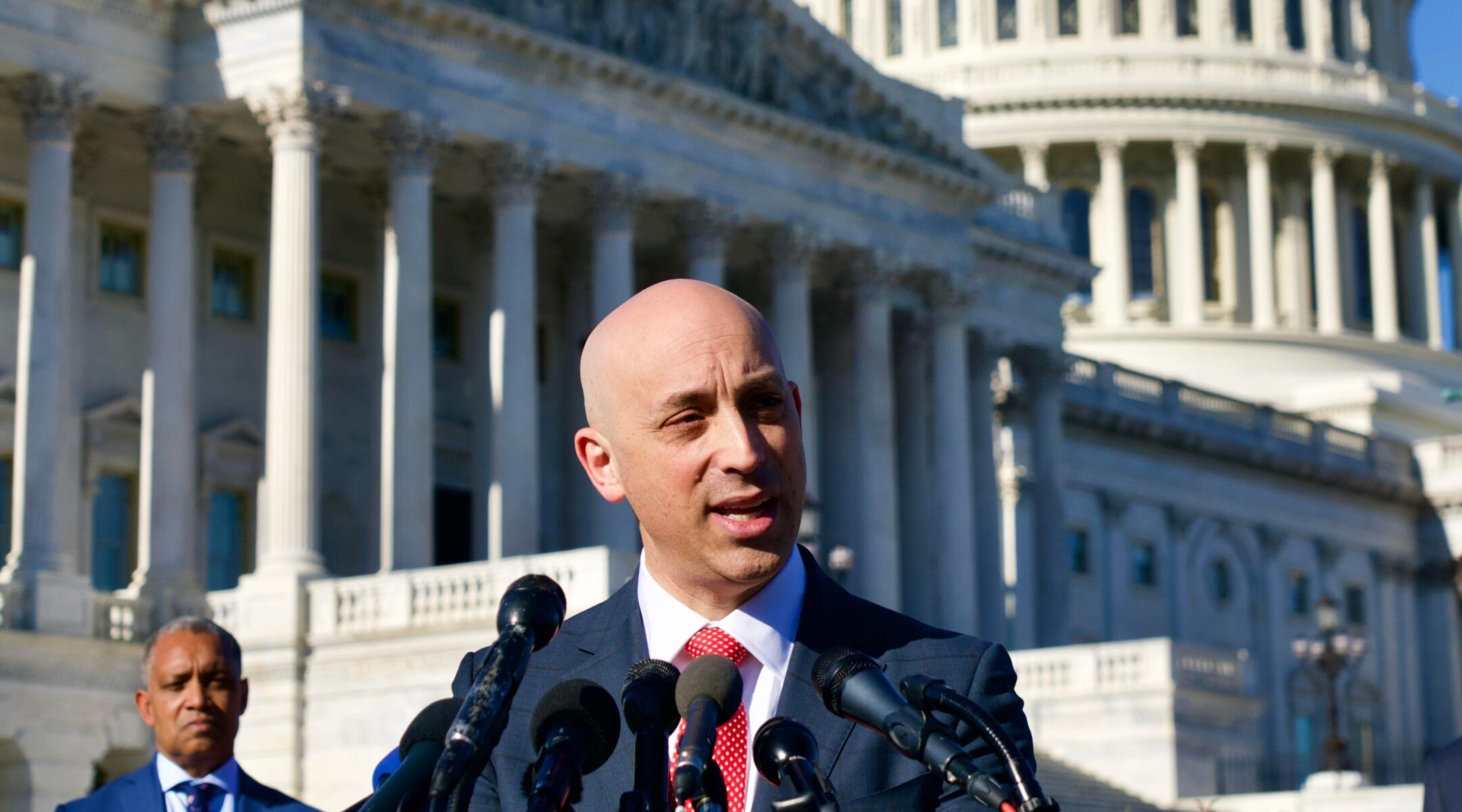 ADL CEO Jonathan Greenblatt, at podium, joining District of Columbia Attorney General Karl Racine, at left, in filing a lawsuit against the groups that allegedly organized the insurrection at the Capitol, speaks at a press conference at the U.S. Capitol, Dec. 14, 2021. (Ralph Alswang)
Advertisement

WASHINGTON (JTA) — The Anti-Defamation League has joined the District of Columbia attorney-general in a lawsuit against two extremist groups that allegedly helped organize the Jan. 6 insurrection at the U.S. Capitol.

The civil rights group and antisemitism watchdog said it helped identify defendants in the case.

A congressional panel is scrutinizing the insurrection and hundreds of participants have been charged with crimes. But the lawsuit is the first civil action addressing the Jan. 6 riot, spurred by former President Donald Trump’s false claims that he won the presidential election.

Five people died during the riot, including a Capitol Police officer, and 140 police were injured. Four officers who were present subsequently died by suicide.

Like a lawsuit that ended last month with judgments against alt-right organizers of a deadly 2017 far-right protest in Charlottesville, Virginia, the suit leverages the so-called Ku Klux Klan act. Dating from the post-Civil War era, the law gives governments the power to sue into bankruptcy entities that have sought to inhibit civil rights through violence. In 1983, the right to sue was extended to non-government entities and individuals.

The lawsuit, filed by D.C. attorney general Karl Racine today, is against two far-right groups, the Proud Boys and the Oath Keepers, and some of their members.

The ADL is one of two nonprofits — the other is the States United Democracy Center — to join the lawsuit, providing pro bono legal counsel to the effort.

ADL CEO Jonathan Greenblatt, speaking at a press conference in front of the Capitol, provided a Jewish context for the organization’s decision to join the lawsuit.

“For more than 100 years, ADL has worked to stop the defamation of the Jewish people and to secure justice and fair treatment to all to deliver on that mission,” Greenblatt said. “We have been at the forefront of strategically monitoring, exposing and countering extremist threats from across the ideological spectrum. ADL experts tracked the planning for the January 6 attack on the Capitol. We helped to identify the perpetrators and any connections that they had to groups like the Proud Boys and Oath Keepers.”

Greenblatt recalled that one of the alleged rioters wore a T-shirt mocking the Holocaust.

“No one will forget the images we saw on January 6, and for the Jewish community seeing individuals wearing antisemitic T-shirts with images like ‘Camp Auschwitz’ on them while storming the Capitol building was particularly searing and traumatic,” he said.

A lawyer representing two of the defendants named in the lawsuit told the Washington Post that the lawsuit was a “fantasy,” conflating groups with individuals who may have committed violence.

Nine victims of violence at the Charlottesville march, backed by the Integrity First for America nonprofit, sued groups and individuals who organized the march under the Ku Klux Klan Act and Virginia state laws. The jury in that case last month awarded the plaintiffs $25 million under Virginia laws but deadlocked on the federal charge. The plaintiffs’ counsel in that case, Roberta Kaplan, has said she is ready to retry the federal case.

Racine is also suing the defendants in his case under local laws.