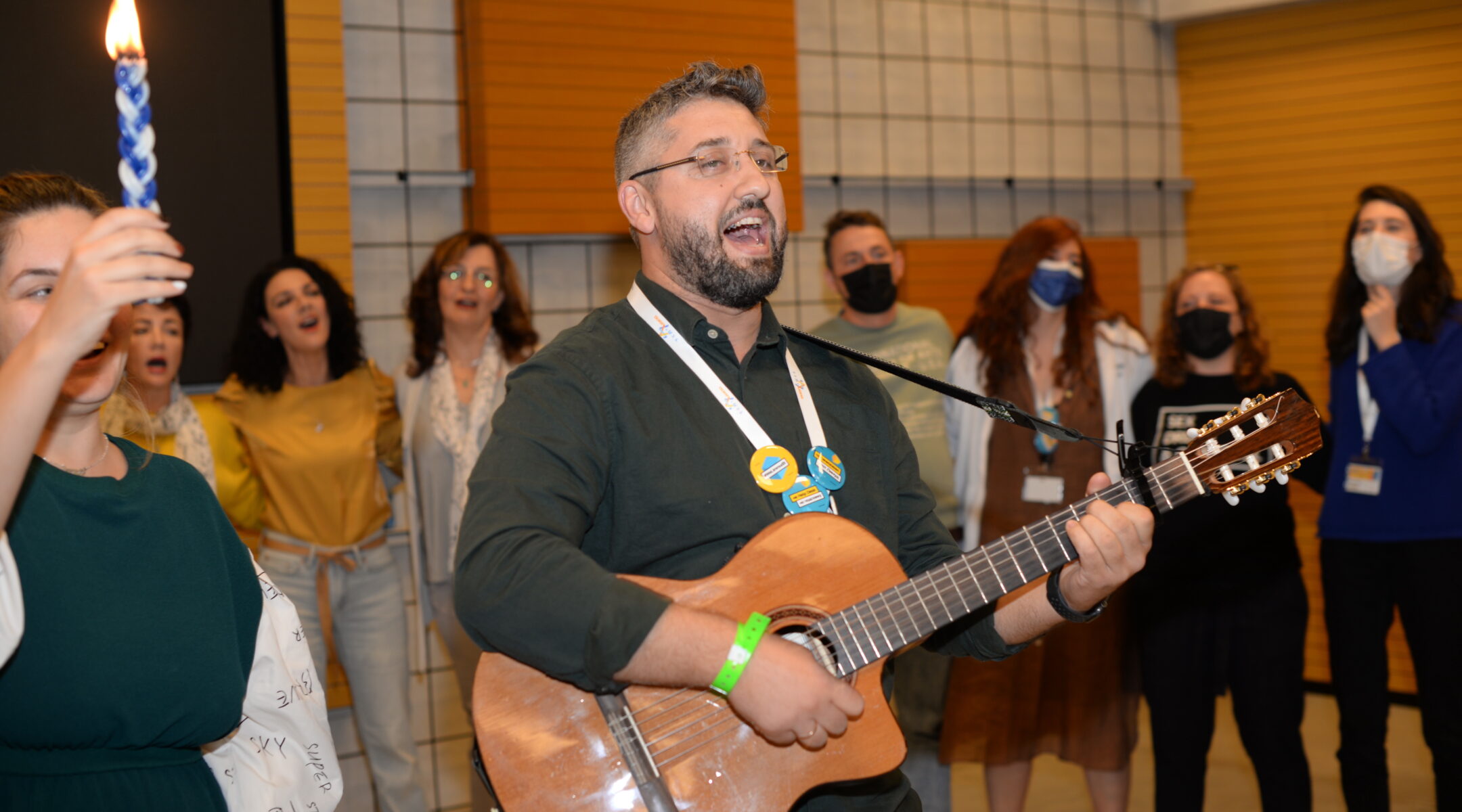 KIBBUTZ SHEFAYIM, Israel — After two years of living under the shadow of Covid, the gathering last weekend of more than 700 Russian-speaking Jews at a bucolic resort along Israel’s Mediterranean coast north of Tel Aviv under crisp December skies had a festive air about it.

“It’s so cool that we actually did this. Until the last minute, nobody was certain it would take place,” said Tanya Pashaeva, 32, a product manager for a Tel Aviv high-tech firm who was one of the weekend’s 82 volunteers. Pashaeva helped organize numerous Limmud FSU conferences worldwide until she moved to Israel in mid-2016.

The Dec. 9-11 confab at Kibbutz Shefayim, Limmud FSU’s Israel festival, marked the biggest full-fledged, multi-day Limmud gathering in the world since the onset of the pandemic. Attendees came to enjoy each other’s company, listen to live musical performances, and attend sessions on topics ranging from helicopter parenting to the future of cryptocurrency to solving the Israeli-Palestinian conflict.

“From the countries where Jewish culture was once suppressed by a communist regime that persecuted Jews and Jewish education, a new generation of children, grandchildren and great-grandchildren has risen,” Yakov Hagoel, chairman of the World Zionist Organization, declared at the conference.

“In their search for identity, participants can explore how their personal experiences enrich and enmesh with the life of the larger Jewish community,” she said. “This conference was also an excellent opportunity for fostering strong connections and building a robust dialogue between Israel and the Diaspora, a critical component in today’s climate.”

Genesis Philanthropy Group is a key supporter of Limmud FSU along with the Claims Conference, the Jewish National Fund (KKL), the Blavatnik Family Foundation, WZO, philanthropists Diane Wohl and Tom Blumberg, and others.

This was the first Limmud FSU conference in Israel since 2019, before the pandemic began. Previous festivals had been held at Kibbutz Ginosar on the shores of Lake Kinneret and in the cities of Jerusalem, Ashdod, Beersheva, Eilat, Ashkelon, and Nof HaGalil, in the Galilee. 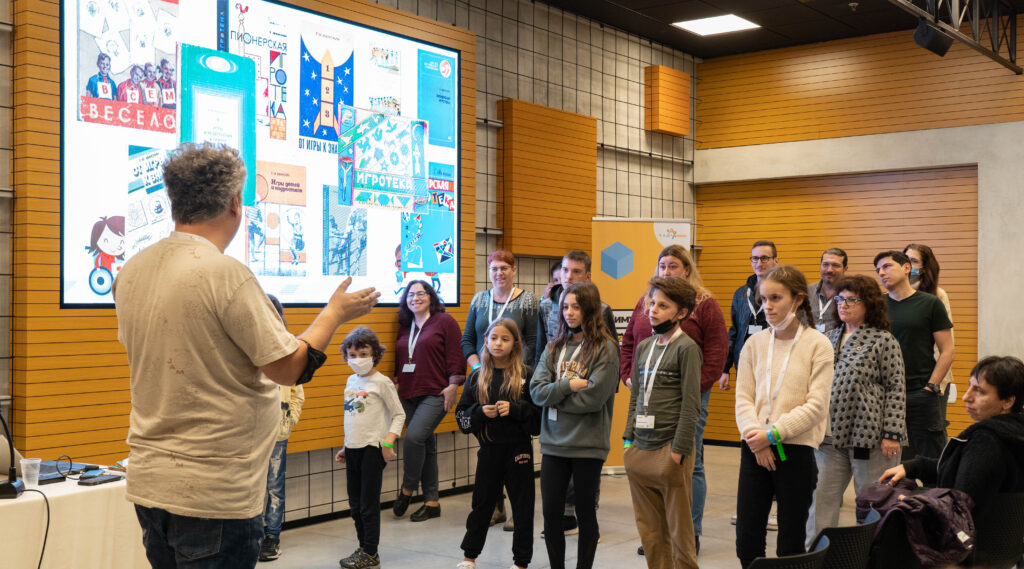 An intellectual game session was among the many events at Limmud FSU’s 2021 Israel festival, December 2021. (Nastassia Khrystsenka)

“And now we have come back, with strength, to face-to-face learning,” Frenkel said. “This gathering in Israel is the largest full-fledged conference of Limmud anywhere in the world this year. That says something about the importance of our conferences for our target audience.”

Chaim Chesler, Limmud FSU’s founder, said, “This year we are marking the bar mitzvah year of our activities in Israel. It is wonderful that we can celebrate 13 years of conferences with a face-to-face gathering.”

One of the weekend’s best-attended lectures was on the coronavirus’ ancillary impact on Jews.

“Covid-19 has sparked a wave of antisemitism and conspiracy theories,” said Raheli Baratz-Rix, head of the WZO’s Department for Combating Antisemitism and Enhancing Resilience. “The quarantines made a lot of people move from the physical arena to social media, so antisemitism has become more common. Even before a vaccine was developed, rumors started spreading about the Jews inventing the virus.”

Listing the “three D’s of antisemitism” — delegitimization of Israel, demonization of the Jews and double standards — Baratz-Rix said the problem intensified in the United States, particularly in the wake of social unrest that erupted after the May 2020 murder of George Floyd, an African American man, at the hands of Minneapolis police.

“I think we should all be worried,” Baratz-Rix said as she displayed a cartoon depicting an IDF soldier helping a white police officer kneel on the neck of a Black man. “In the last year it’s gotten worse because of coronavirus and the financial situation.”

Not everything about Limmud FSU was so somber. The weekend also featured concerts by Russian-born Israeli actress, singer and pianist Ania Bukstein as well as the local band Gefilte Drive, which performed “A Bisele Mazel,” “Tumbalalaika,” “Bei Mir Bistu Shein” and other beloved Yiddish songs.

Among the session speakers were Elyakim Rubinstein, Israel’s former attorney general; Sar-Shalom Jerbi, KKL-JNF’s education division director; Aharon Ze’evi Farkash, a former intelligence chief of the Israeli Defense Forces, and the new chairman of the Yad Vashem Holocaust Museum, Dani Dayan. He discussed the importance of Yad Vashem as a place to learn, teach, and document the personal testimonies of survivors, who due to their advanced age won’t be around much longer to tell their stories. 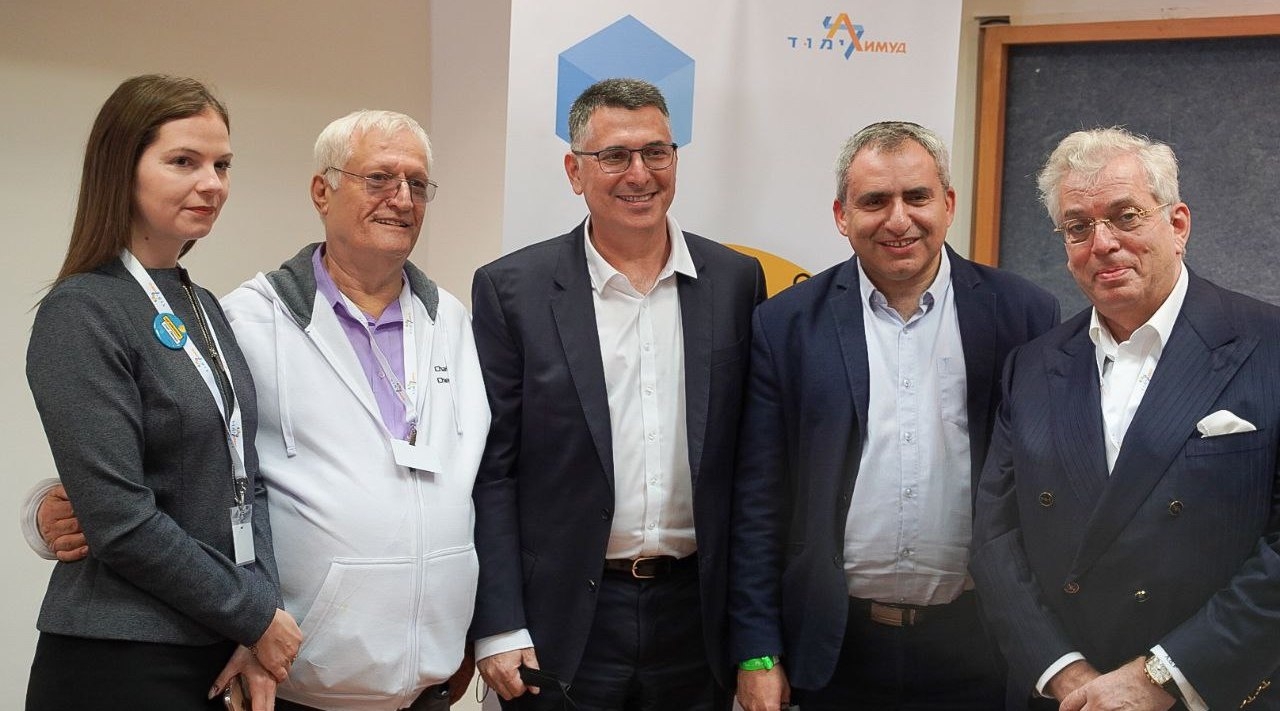 Natalia Dobjanskaia, a native of Moldova, attended the very first Limmud FSU gathering in 2008, at the then-Ukrainian port city of Yalta.

“I was really impressed with that event, and the principles of Limmud, and I wanted to be part of it,” said Dobjanskaia, a digital marketing professional who has lived in Israel since 2008. “During these past 13 years, I’ve been a volunteer, I’ve been on the organizing committee and I’ve also been just a participant. I like that everyone is welcome here, and that all people are equal.”

Since the first Limmud FSU conference in Moscow 15 years ago, over 80 events across the globe have been organized by 13 volunteer teams with over 75,000 Russian-speaking Jewish participants. The leaders of the organization are Chairman Matthew Bronfman, Frenkel, Chesler and co-founder Sandra Cahn.

Olga Kigel, 36, is a bookkeeper at an Israeli software firm that protects companies against cyberattacks. Originally from the eastern Ukrainian city of Donetsk, she immigrated to Israel in 2016 and attended her first Limmud FSU event in Ashdod two years ago.

“It was a chance to meet new people and hear stories about the Middle East firsthand that I had only read about in history books,” Kigel recalled.

For Sergey Urazov, a 38-year-old software developer who moved to Israel two years ago from Perm, Russia, this was his first Limmud conference.

He observed, “It’s a great opportunity for networking, meeting new people and improving my social life.”

While most of the participants came from inside Israel, a few came from overseas. Brooklyn psychotherapist Alex Yentin, 52, is a veteran “Limmudnik” who has attended every Limmud FSU event in the New York area since 2011. Born in Uzbekistan, he left in 1992 on a Soviet passport, lived for a time in Israel and eventually settled in New York, where he works as a therapist.

“This place is amazing,” he said, looking out at Shefayim’s fruit trees, children playing games in the grass, and the distant Mediterranean coast. “I met here this weekend many people whom I worked with 30 years ago in Israel and abroad. It was very emotional for me.”