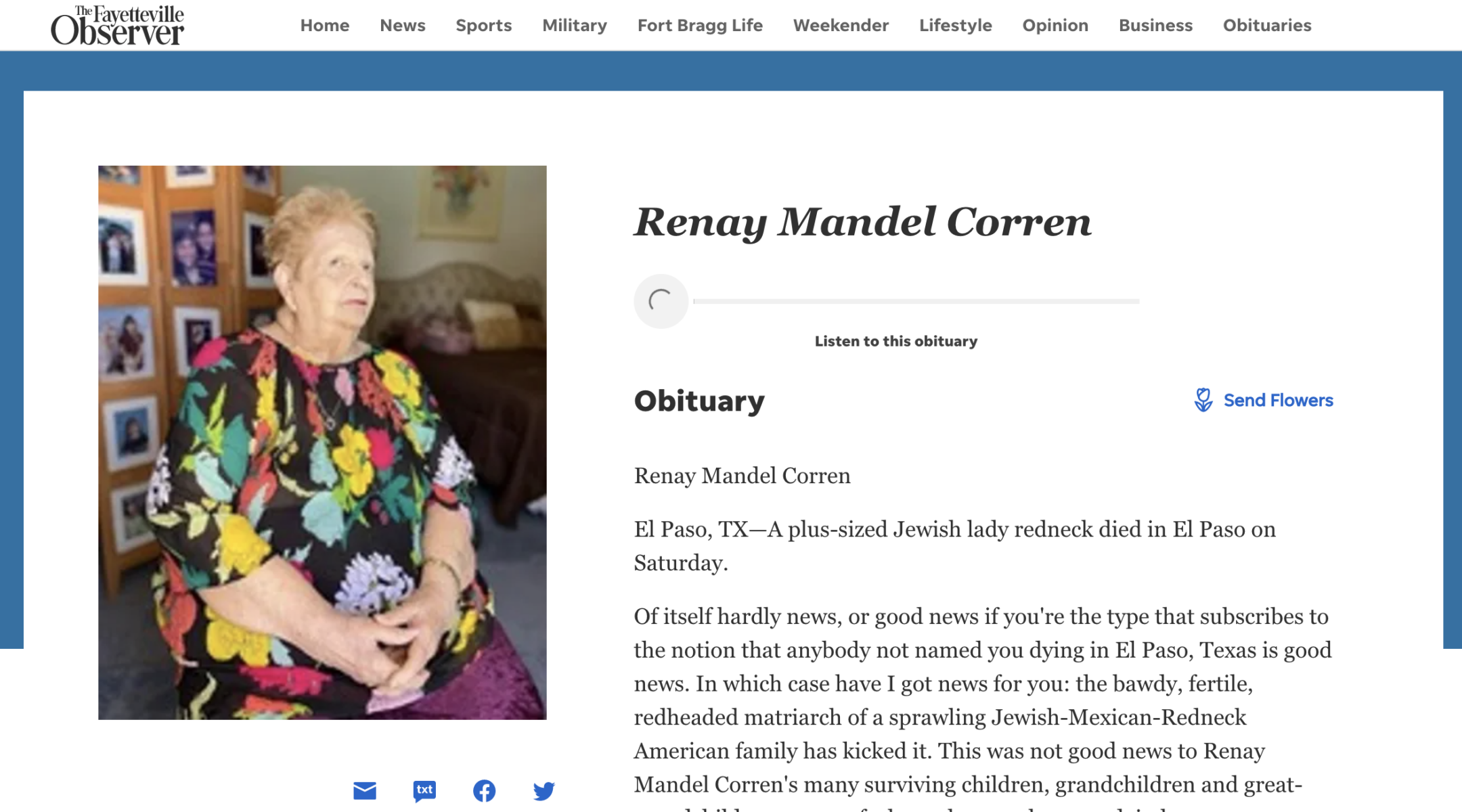 It’s considered poor journalistic form to begin an article with a quotation. But journalists are also supposed to show, not tell, and there’s no better way to explain the irreverent obituary that Andy Corren wrote for his mother, Renay Mandel Corren, than by simply quoting it.

The obituary published in the Fayetteville Observer, the newspaper of the North Carolina City near where Renay Corren lived for many years, went viral on Wednesday after the crime writer Sarah Weinman tweeted about it.

This obit, my god. https://t.co/tWoTdUIAnN

In the obituary, Andy Corren details his mother’s 84 years, which she spent mostly in North Carolina, Florida and Texas. “Hers was a bawdy, rowdy life lived large, broke and loud,” he wrote. “We thought Renay could not be killed. God knows, people tried. A lot.”

After being born in McKeesport, Pennsylvania, where “she first fell in love with ham, and atheism,” Renay Corren moved to Fayetteville, North Carolina, with her Army husband. After that marriage ended, she lived in Miami and, most recently, with a son in El Paso.

Through it all, Andy Corren wrote, “Hers was an itinerant, much-lived life, a Yankee Florida liberal Jewish Tough Gal who bowled ’em in Japan, rolled ’em in North Carolina and was a singularly unique parent.”

Corren doesn’t hold back from sharing Renay’s shortcomings, with a heavy dose of humor:

Often frustrated by the stifling, conservative culture of the South, Renay turned her voracious mind to the home front, becoming a model stay at home parent, a supermom, really, just the perfect PTA lady, volunteer, amateur baker and-AHHAHAA HA! HA! HA! Just kidding, y’all! Renay – Rosie to her friends, and this was a broad who never met a stranger — worked double shifts with Doreen, ate a ton of carbs with Bernie, and could occasionally be stirred to stew some stuffed cabbage for the kids. She played cards like a shark, bowled and played cribbage like a pro, and laughed with the boys until the wee hours, long after the last pin dropped.

Despite her foibles, Corren makes clear that his mother will be deeply missed in their “sprawling Jewish-Mexican-Redneck American family.”

She left me nothing but these lousy memories. Which I, and my family of 5 brothers and my sister-in-laws, nephews, friends, nieces, neighbors, ex-boyfriends, Larry King’s children, who I guess I might be one of, the total strangers who all, to a person, loved and will cherish her. Forever. Please think of the brightly-frocked, frivolous, funny and smart Jewish redhead who is about to grift you, tell you a filthy joke, and for Larry King’s sake: LAUGH. Bye, Mommy. We loved you to bits.

The 1,000-word obituary has been shared tens of thousands of times, and some people online say they plan to attend a May gathering that Andy Corren said was being planned to remember his mother.

Others said that Renay’s story inspired them to lead a life well lived, while others still said they hoped someone would one day pour as much heart into an obituary for them.

“I would like to hire this obit writer in advance for when my time comes. Whew!” one woman wrote in response.

It’s unclear whether the New York City resident, who wrote that he was Renay’s “favorite son, the gay one who writes catty obituaries in his spare time,” plans to take up the role for anyone else.