As COVID spikes in NYC, Jewish schools and synagogues are going remote again 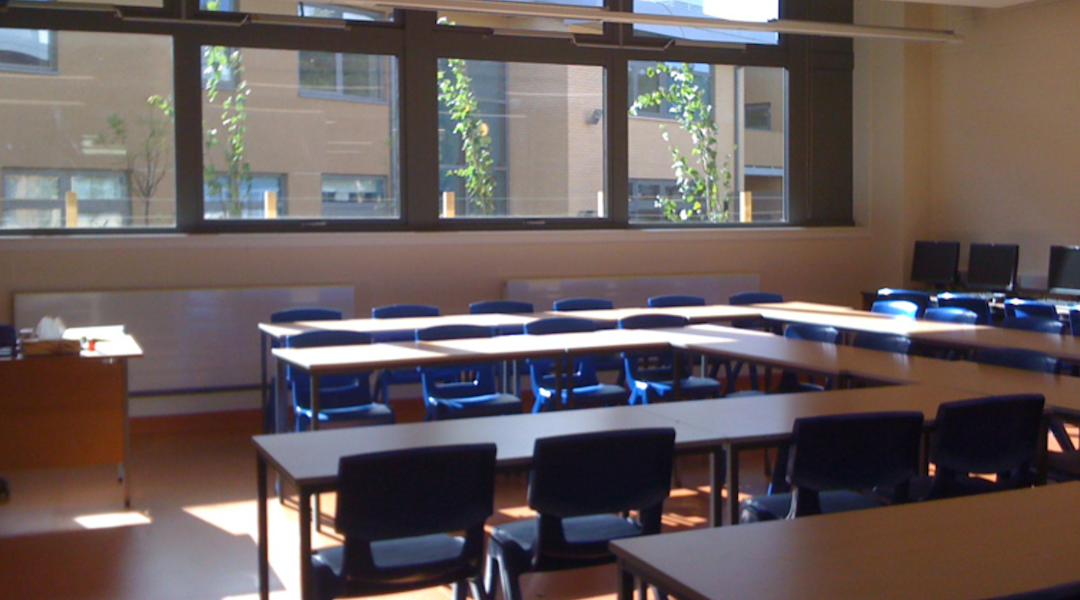 (New York Jewish Week via JTA) — Twenty-one months after New York City synagogues and Jewish schools became some of the first to close because of the encroaching COVID-19 pandemic, a surge in cases is causing them to shut their doors again.

Several Jewish day schools have switched to virtual learning for the rest of the time until winter break.

Meanwhile, multiple synagogues announced Friday that they would hold services this Shabbat online only, in what even they said felt like a replay of the beginning of the pandemic.

“We are no longer confident that vaccinated individuals, wearing masks, can reasonably safely gather in our specific spaces indoors without substantial risk of spreading the virus,” read the announcement that Romemu, a Jewish Renewal congregation in Manhattan, made on Friday.

“We are reminded of March 2020, when we acted to limit onsite gatherings even before it was widely considered necessary to do so,” the announcement read. “We felt then, as we do now, that the health and safety of our congregants and those attending our services is our highest priority.”

The decision made by many Jewish institutions to go remote in March 2020 prompted an unprecedented change in Jewish life. Non-Orthodox synagogues began holding virtual Shabbat services, many for the first time ever, and the Jewish world as a whole invested rapidly in moving Jewish life and programming fully online.

As rates decreased, the world learned more about the virus and vaccines rolled out, synagogues and schools welcomed people back into their buildings, though some synagogues still hold virtual services or stream to people who are not physically present.

In recent days, worrying news has emerged, inducing fear among New Yorkers who witnessed the first punishing wave of the pandemic in the United States. The COVID-19 case counts in the city have more than doubled during the past two weeks, the positive-test rate has shot up and lines at test sites have stretched longer and longer. The Omicron variant is seen as likely to fuel a further surge in cases.

The Abraham Joshua Heschel School in Manhattan announced via email Thursday evening that it would be closing its high school and switching to virtual learning until it adjourns for winter break in the middle of next week. The decision was prompted by 14 COVID cases over the previous two days. The school has a vaccine mandate for students.

“In light of this trend, as well as unknowns about spread within grades, in consultation with our Advisory Committee, we have decided that in-school learning for the High School is not safe enough for these final days before winter break,” Ariela Dubler, the head of school, wrote in the email. “There is, of course, much uncertainty at this time.”

The Shefa School in Manhattan, which serves students with learning disabilities, is also going remote until winter break.

On the synagogue front, a number of synagogues have announced a return to all-virtual services. In addition to Romemu, Central Synagogue, the large Reform Congregation in Midtown, also cited the rise in cases and announced on its website that “this week’s worship services for Shabbat … will only be held virtually.” East Midwood Jewish Center in Brooklyn made the same decision, as did Lab/Shul, a nondenominational congregation in Manhattan.

But not everyone is going remote just yet. SAR Academy, the K-8 Orthodox day school in the Bronx that was the first to close at the onset of the pandemic, has not yet made the decision to shut its doors until winter vacation. The school has had students test positive for COVID this week as well.

“We definitely feel the frenetic pace that brings us back to those days, but we definitely know a lot more,” said Rabbi Bini Krauss, the school’s principal. “We have a very strong system to analyze information, to communicate, and I feel better about that. It does fee like it’s moving very quickly, and we need to make smart decisions and healthy decisions.”