Jewish studies scholars gather under the shadow of Omicron, heartening many and rankling others 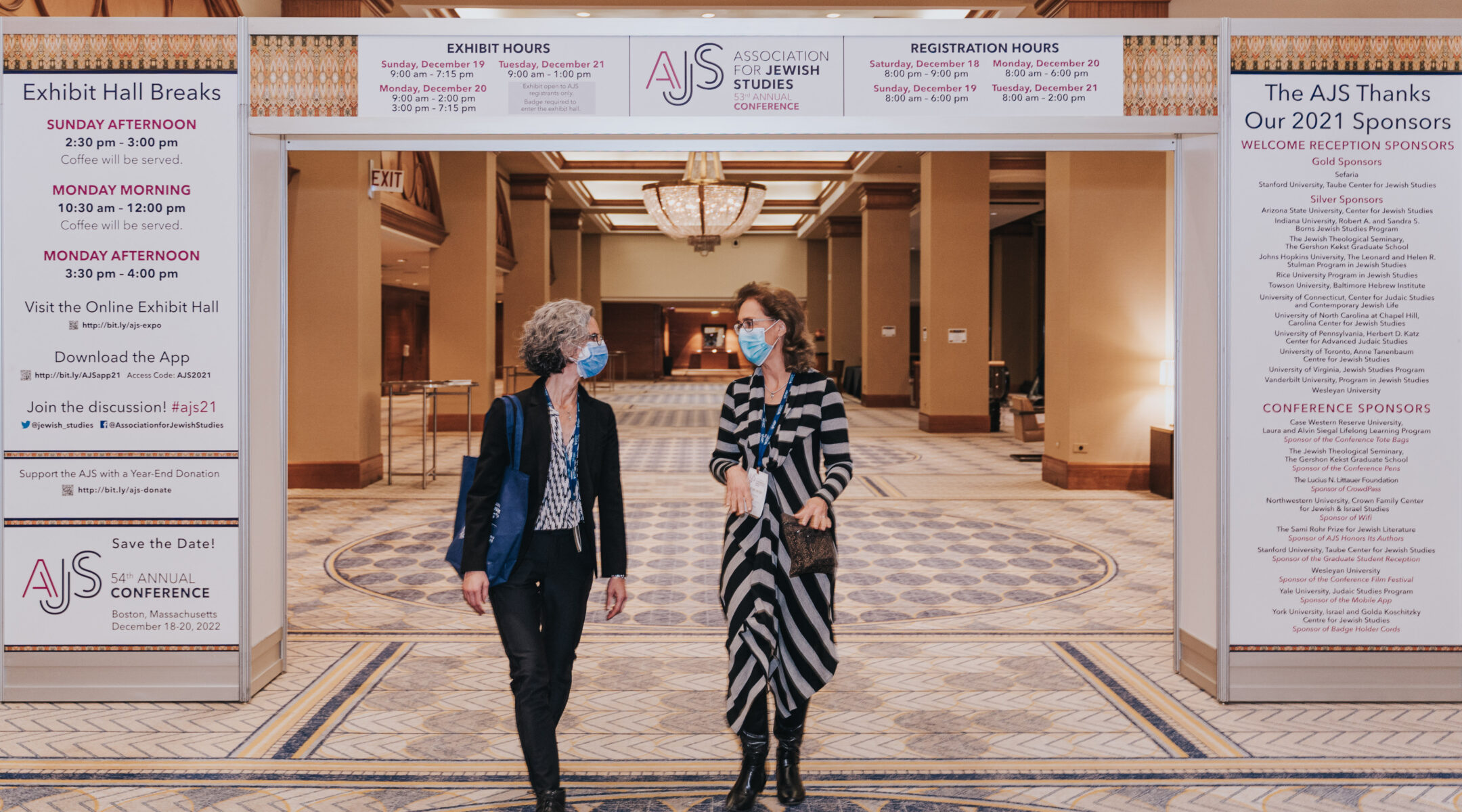 CHICAGO (JTA) — This year’s Association of Jewish Studies conference was supposed to be a triumphal post-pandemic gathering for Jewish studies scholars and enthusiasts.

But instead of a carefree Super Bowl of Jewish scholarship, the conference, which began Sunday in Chicago, is smaller than planned, with strict vaccination and mask requirements.

The roughly 600 people who are attending — down from about 1,200 on average before the pandemic — say they are grateful to be sharing their scholarship and reconnecting with colleagues after two years apart.

But as worrisome news emerged about the Omicron variant of COVID-19, about 150 people — including some who were presenting — canceled their plans to attend, some as late as Sunday morning. The spate of cancellations renewed questions about why there is no option for virtual participation, while some who made it say they are worried they may have inadvertently joined a super-spreader event.

“I am very happy to see colleagues and to hear fascinating presentations. I’m also nervous about the possibility of catching Omicron,” Yair Wallach, a senior lecturer in Israeli Studies at SOAS University of London who is vaccinated and has had a booster shot, told the Jewish Telegraphic Agency. “We will only know in a few days after the conference how this went, COVID-wise.”

Last year’s all-virtual conference was the most-attended ever for AJS, according to Executive Director Warren Hoffman, who said the group has 1,800 members. Among those who attended the conference for the first time were “people with disabilities, people who live very far overseas and can’t travel, people with limited funds who don’t have the money to travel,” he said.

The feedback organizers received about the virtual conference was generally very positive, Hoffman said. But at the same time, “the large majority of people, as most human beings are, were hungry for in-person experience and [said they] really want to get back to in-person this year.”

The group committed early in 2021 to holding this year’s conference in person. At the time, vaccines were rolling out and optimism was high that the pandemic, then entering its second year, would soon come to a swift end.

That reality faded over the course of the year. But the conference pressed on with its in-person plans, introducing strict rules designed to keep participants safe. All attendees had to present proof of vaccination to register for the conference and then present a confirmation QR code to enter the conference space. Ubiquitous safety placards urged mask use when not eating or drinking, and compliance was the rule rather than the exception on Sunday. 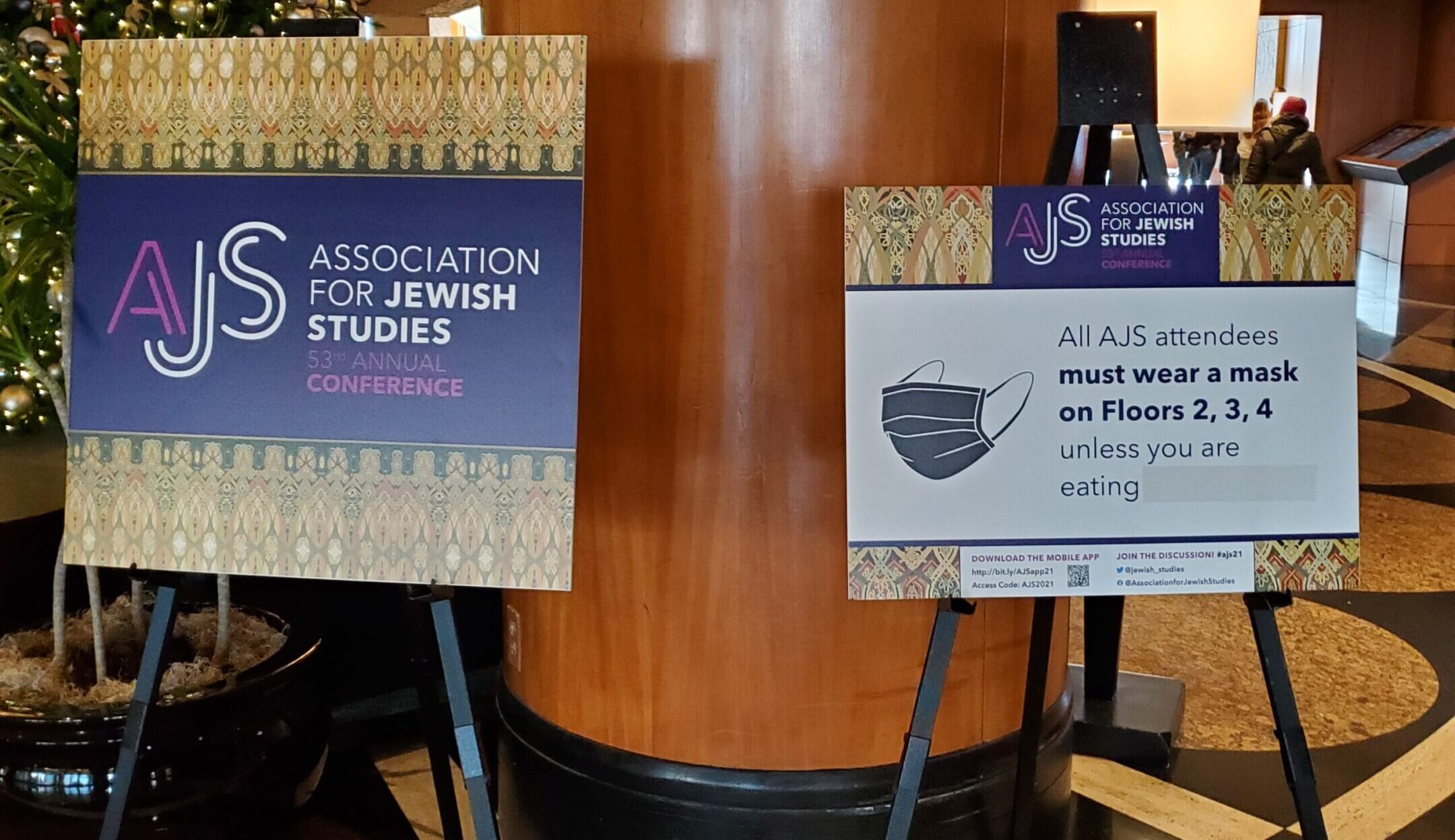 Laura Levitt, a professor at Temple University and chair of AJS’s Committee on Sexual Misconduct, has attended the conference since 1991. She expressed admiration for this year’s organizers.

“I think they did an incredible job under really, really stressful circumstances, and I think most of us are really grateful to be here and to be present with each other,” she said. “I mean, I write about objects, and the materiality, the physicality, the tactility – we need that and we’ve been craving that. These are all things that make me happy, and because I had really, really low expectations, these are all good.”

Yet at a time when people have become far more adept at engaging online, the decision not to allow any virtual participation, particularly as new travel restrictions and lockdowns set in in recent weeks, has rankled some.

“Insisting on plans to continue with in-person only options and refusing to allow remote participation for a conference despite all that we see happening now and all that we know shows, yet again, that profits matter more than people,” Oren Kroll-Zeldin, an assistant professor at the University of San Francisco, tweeted on Friday.

Switching to an online-only conference or the hybrid model would not have been as simple, as many on social media have made it sound, Hoffman said.

“It took us months and months to get all the technology together last year for an online conference,” he said, adding that “it’s not just about creating 170 links and sending them out” to viewers at home. (The conference has almost 200 scheduled sessions, with as many as 18 running at a time.)

“It would run hundreds of thousands of dollars, in addition to what we’re already paying for the conference, to be a truly hybrid conference, and it just isn’t sustainable,” Hoffman said.

“An in-person conference is immensely more useful, professionally speaking,” said Wallach. “Clearly a hybrid/virtual one is safer, but much less useful.” 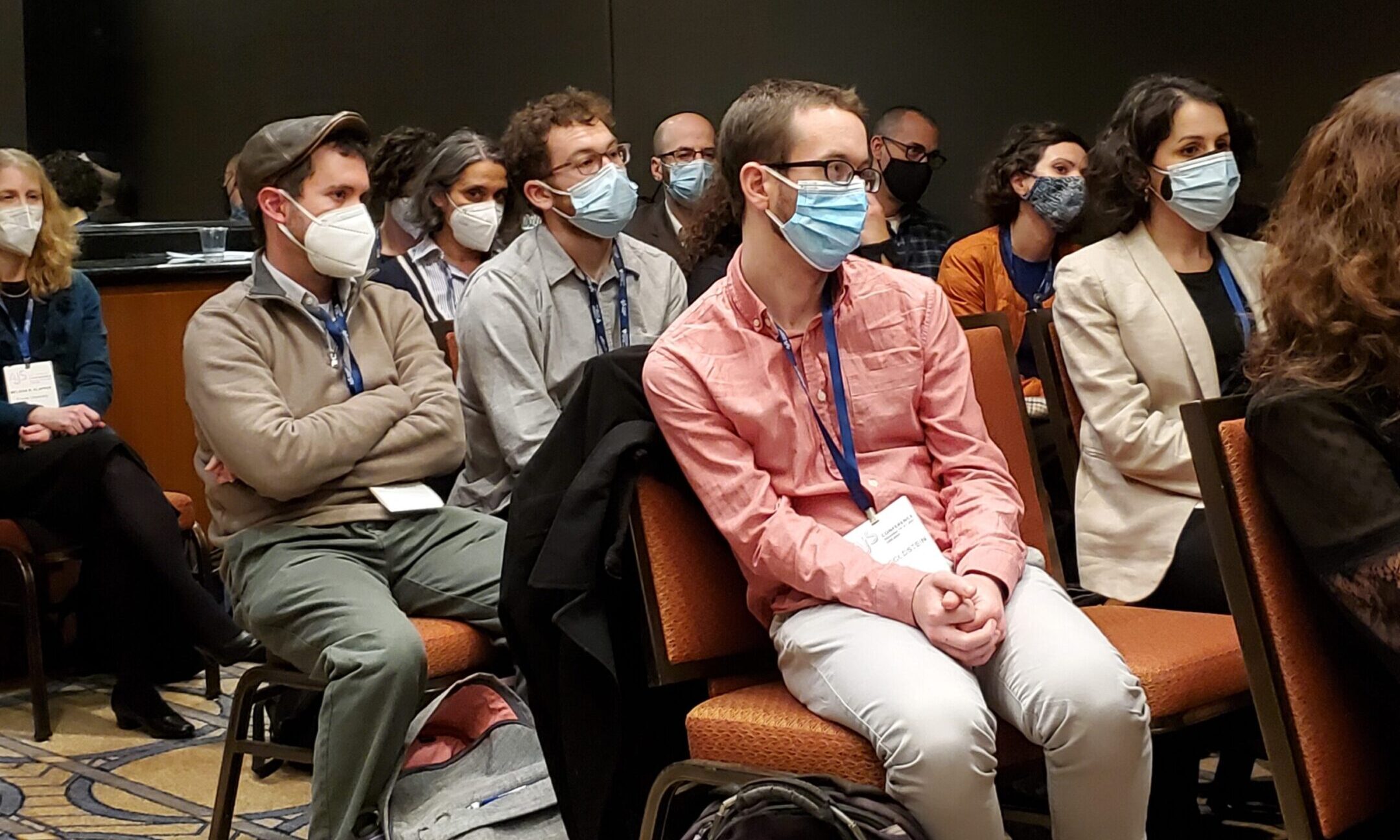 The audience listens to the panelists during the session “Globalizing Jewish History, De-Ashkenazifying the Jewish Studies Curriculum” at the 53rd Association of Jewish Studies Annual Conference at the Sheraton Grand Chicago, Dec 19, 2021. (Rachel Kohn)

Hoffman said AJS plans to incorporate feedback about online access by committing to having at least some conferences, starting in 2024, completely online.

“Hopefully the world will be in a better place, but regardless, we realize that there is value in being online every few years as a way to help give more access to people who might not always be able to come,” he said.

For now, AJS is offering refunds to anyone who canceled, and about 30% of those who have done so have donated their registration fees to the society, according to Hoffman.

The cancellations gutted some of the scholarly panels at the heart of the program.

Two participants dropped out of Levitt’s first panel at the conference. One gave notice the day before, while the other made the call that morning. At least two more people will be missing from her panel on Tuesday.

“I think there’s just a lot of anxiety and we’re also tired and I think it’s just hard,” Levitt said. “I’m aiming for staying calm. That feels like the best thing.”

Skinazi, who flew across the Atlantic for her third AJS conference, said most of her colleagues scrapped their plans to attend, including members of her panel Monday on gender and Muslim-Jewish relations. Two panelists from overseas dropped out some time ago when travel restrictions became more stringent, she said, while one of their replacements couldn’t leave England after testing positive for COVID-19 and an additional panelist opted not to come rather than have to quarantine upon returning to Israel.

“I love the talks, I think they’re amazing, but it’s not why I come,” Skinazi said. “It’s just about the people, which is also why it’s so sad that so many people had to drop out at the last minute.”

Roee Yakov Goldschmidt, a lecturer on Kabbalah and Hasidic thought at The Open University of Israel, said he personally felt safe because of the conference’s clear rules about vaccination. He was concerned, however, that his flight home would be canceled.

The possibility of getting stuck in the United States or in quarantine deterred others from attending. Sasha Goldstein-Sabbah, an assistant professor at University of Groningen in the Netherlands, faced mounting concerns as the date of the conference approached, from the possibility of flight cancellations to uncertainty about getting a PCR test for international travel.

She decided to stay home, forgoing multiple scheduled meetings related to projects and consulting jobs as well as the opportunity to display her new book in the exhibit hall.

“Given the current public health concerns I think cancelling the conference probably would have been the responsible decision,” she said. But she also acknowledged that the latest news about the Omicron variant likely came out too late for the organizers to change course.

Wallach, who will be speaking about Ashkenazi acculturation in the Arab world, said he might have backed out of the conference as well if he wasn’t already in New York last week.

“Travel looked tentatively okay when I booked it, and it’s the first conference I am attending in person in a while and I very much missed it,” he said. “At the same time, it is clearly not a good idea to hold such a gathering in person at a time of a massive outbreak. This became clearer over the last few days. For me it was too late to cancel, as I was already on the way here.”

Correction: This originally said that AJS’ executive director had resigned in 2021. It was the group’s president who resigned, and that reference has been removed from the story.