In Istanbul, a conference of rabbis from Islamic nations got a surprise: An audience with Erdogan 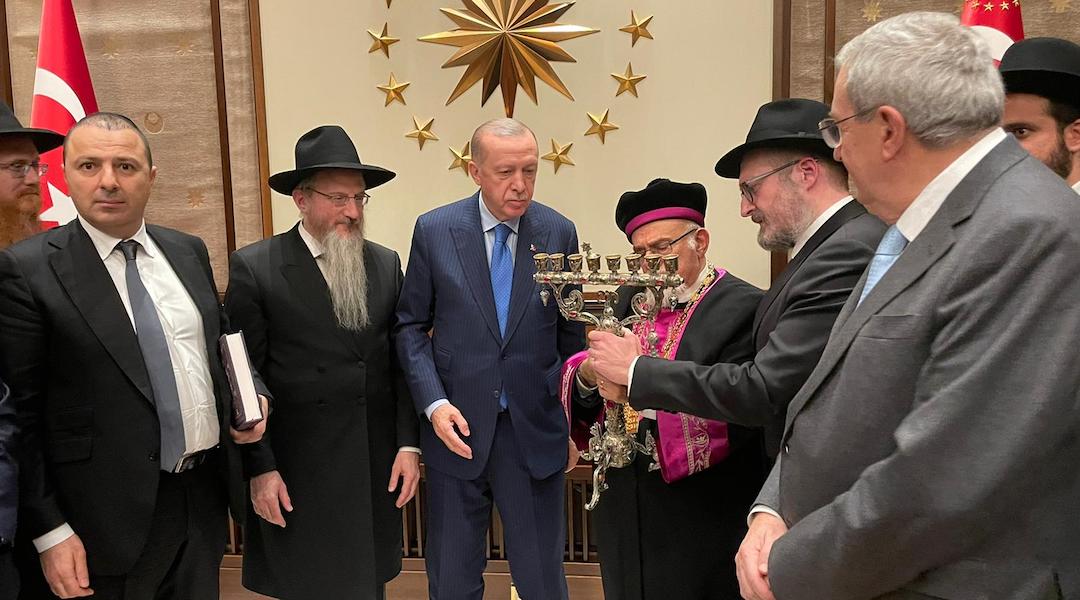 ISTANBUL (JTA) – Rabbis from across the world filled the halls of Istanbul’s Conrad hotel this week for the inaugural conference of the Alliance of Rabbis in Islamic States (ARIS). They were expecting two days of networking, discussions of Jewish law and simple camaraderie over their shared experience of supporting Jewish life in Muslim-majority countries.

What they weren’t expecting was to be whisked off to the Turkish capital of Ankara, on a private plane sent by Turkish president Recep Tayyip Erdogan, or to have dinner with him at his presidential palace.

Rabbi Mendy Chitrik, the Ashkenazi chief rabbi of Turkey and director of ARIS, only got the news that the Turkish president would receive them hours before the conference was set to begin.

According to Chitrik, Erdogan stayed with the rabbis for two hours discussing a variety of topics.

“The president has listened very gracefully to all of the rabbis, has spoken in very strong terms against antisemitism and Islamophobia and has reiterated the Turkish stance that denying the Holocaust is a crime against humanity,” Chitrik told the Jewish Telegraphic Agency, adding that Erdogan also voiced his support for the construction and renovation of synagogues in Turkey and the Turkish Republic of Northern Cyprus.

Another topic addressed was the state of Turkish-Israeli relations.

“I value our renewed dialogue with Israeli President Isaac Herzog and Prime Minister Naftali Bennett,” Erdogan noted to the rabbis, according to the government-aligned outlet Daily Sabah.

JTA's Around the World newsletter gives you the latest global Jewish news.

Though the country was once a strong ally of Israel, Turkish-Israeli relations have soured under Erdogan’s nearly 20-year rule. 2010’s Mavi Marmara Incident, when Israeli commandos killed nine Turkish citizens attempting to break Israel’s blockade of the Gaza Strip, ushered in a low point (and several years of Turkish legal battles), as did the U.S. Embassy’s move to Jerusalem in 2018. Erdogan has called Israel a “terrorist state” and accused it of “genocide.”

Despite continuing trade relations with Israel, the Turkish government also hosts the leadership of Hamas on its soil, and is a major funder of Palestinian causes in Gaza and the West Bank.

The Turkish president reiterated that position, but called on the rabbis to be part of the solution.

“We all have to strive for peace in the Middle East,” he said. “We do not want to see any conflicts in this geography that is home to three Abrahamic religions.”

“I believe that a solution that prioritizes the sensitivities of all religious groups living in Jerusalem can be achieved,” he added.

Erdogan’s relations with the global Jewish community have also not always been so rosy.

In May, he was castigated by U.S. President Biden for statements, considered to be trading in antisemtic tropes, which Erdogan made during Israel’s flare-up of tensions with Gaza.

“They are murderers, to the point that they kill children who are five or six years old. They only are satisfied by sucking their blood,” Erdogan had said at the time. “”It is in their nature.”

At a 2015 rally, the authoritarian-leaning ruler also lashed out at Western media, saying that “Jewish Capital” is behind The New York Times.

Nonetheless, the rabbis welcomed the meeting. 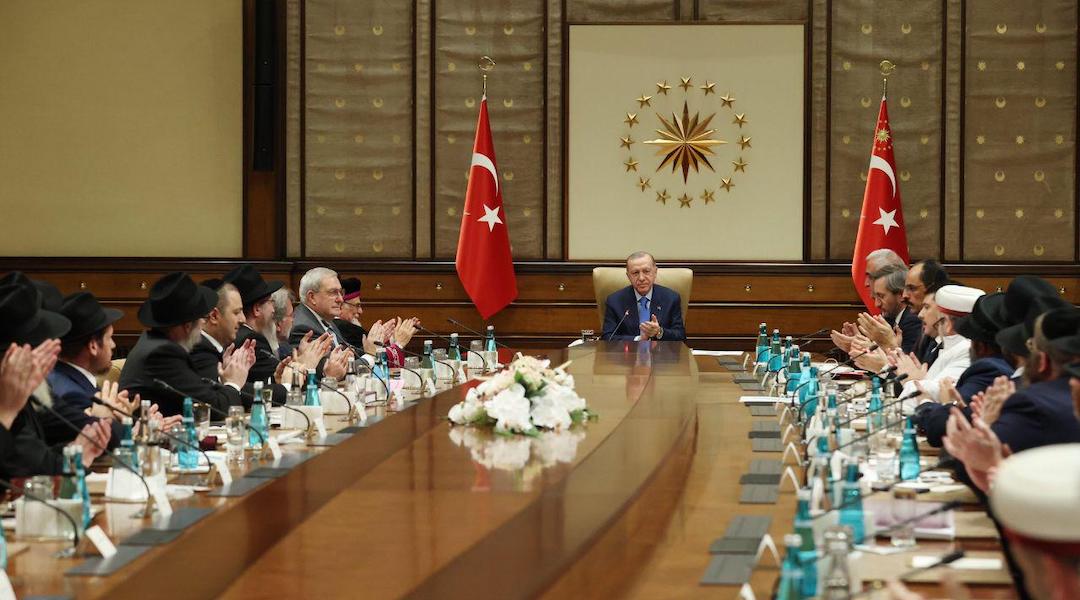 Turkish Jewish community leaders and members of the Alliance of Rabbis in Islamic States from around the world meet with Turkish president Recep Tayyip Erdoğan at his Ankara palace, Ak Saray, Dec. 23, 2021. (David I. Klein/JTA)

“We are forward-looking rabbis. We are working in communities in the Muslim world, and we are looking to strengthen Jewish life. There are many things in the past, but we are looking forward, working on the present and working for the future,” Chitrik said.

All in all, the level of dialogue the rabbis shared with Erdogan was precisely one of the reasons Chitrik founded ARIS.

The idea came to him while at another conference, the Kinus HaShluchim – an international conference of Chabad emissaries – when he found himself seated at a table with colleagues from Azerbaijan, Morocco, the United Arab Emirates and Nigeria.

“We looked at each other and said, ‘Wait a minute, we’re all rabbis from Muslim countries. Why isn’t there a session here at this conference for rabbis of Muslim countries?’” Chitrick recalled. “There are things that we can help each other with. So we started a WhatsApp [group], then made a Twitter handle, and it grew from there.”

A century ago, there were well over one million Jews living in the Muslim world. Though the establishment of the State of Israel brought Jewish life to an end in many Muslim countries, they haven’t all entirely emptied.

Around 100,000 Jews still live in Muslim-majority countries, Chitrick estimated. The largest Jewish populations can be found in Kazakhstan, Azerbaijan, Iran and Turkey.

“People say, ‘Wow, there are 100,000 Jews in Islamic countries?’ Yes, there are,” he said. “They have been living in this Islamic world for thousands of years, and they continue to live here, continue to call this place home. Many times they’re very patriotic toward the places where they live in. Most of them are not looking for other places to move out to. “

When he founded ARIS, Chitrik was adamant that it couldn’t just be an organization of Chabad rabbis. It would need to bridge all the different Jewish communities served in the Muslim world, including post-Soviet countries like Azerbaijan and Kazakhstan; historic communities of the Middle East and North Africa such as Turkey, Iran, Tunisia and Morocco; and fast-growing communities in the UAE and Bahrain in the wake of the Abraham Accords.

“The agenda of the Alliance of Rabbis is to normalize Jewish life in Muslim countries, Chitrik said. “It shouldn’t look as a surprise to people.”

Over their years working in their countries, what Chitrik and many of the rabbis have found is that while Jewish life is not necessarily discouraged, foreign intervention, be it from Israel or Jewish citizens of western powers like the U.S. or U.K. often complicates it.

“Many of the rabbis are realistic and know that in the places we live, international interference is not always looked at positively,” Chitrik said. “When a rabbi in Turkey or in Iran needs help, whether it is in communication, in providing tefillin, in sending matzot or etrogim, it is so much easier to do it from Istanbul than anywhere else.”

Through the alliance’s coordination, last year they were able to get matzah to Jews in countries ranging from Libya to Lebanon and Syria. It also helped get some of the last Jews of Afghanistan out of the country after the Taliban’s resurgence, one to Istanbul and another to Albania. 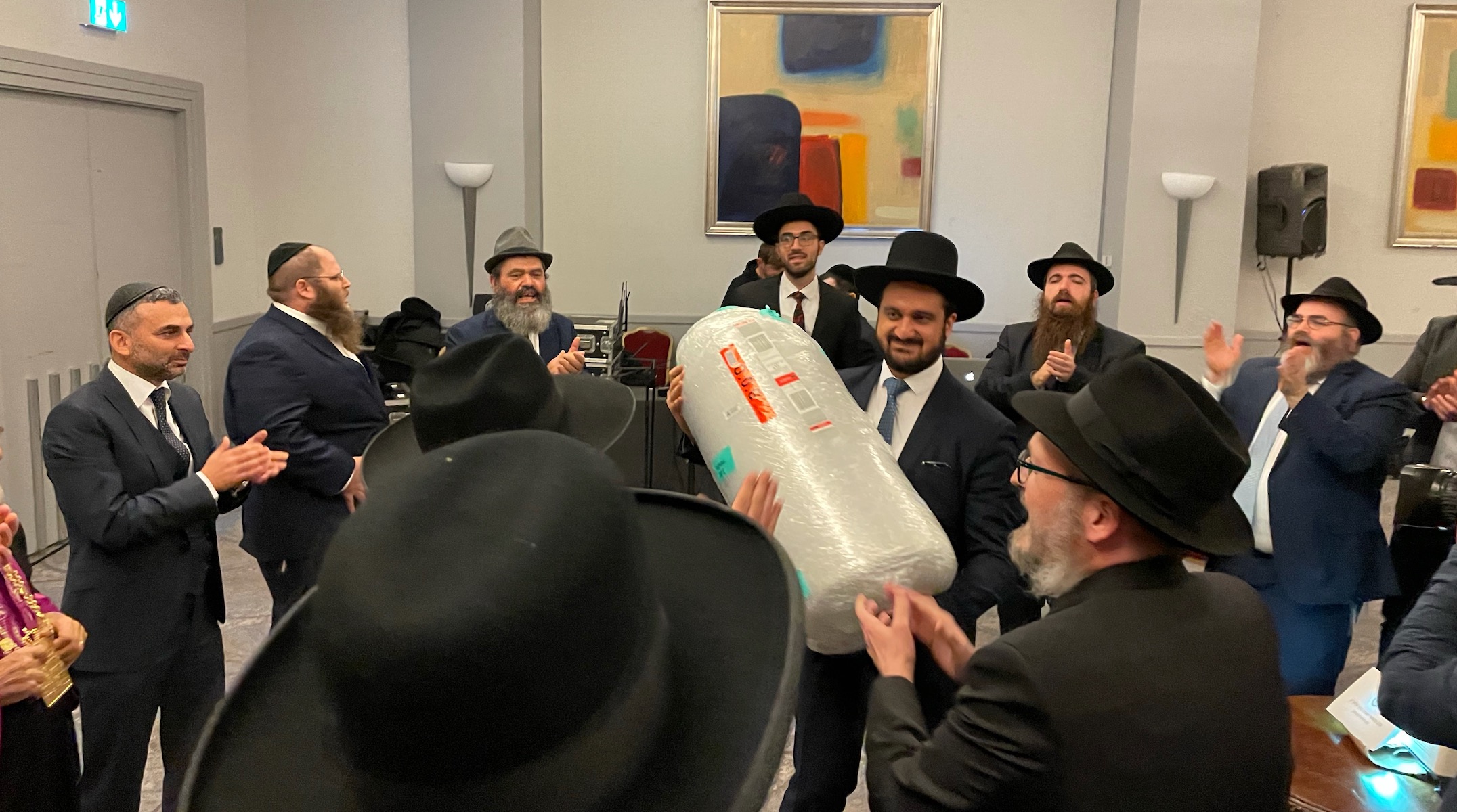 The inaugural conference of the Alliance of Rabbis in Islamic States, held in Istanbul in December 2021, aimed to help support Jewish life in Muslim-majority nations. (David I. Klein/JTA)

This week’s conference in Istanbul was the first time many of the rabbis got to finally meet in person. In attendance were rabbis representing more than ten counties, including Iran, Egypt, Tunisia, Albania, Kosovo, the United Arab Emirates, Azerbaijan, the Turkish Republic of Northern Cyprus, Kazakhstan, and Russia as well as Turkey whose chief rabbinate served as hosts to the conference.

For many of the attendees, one of the most important things they felt they got out of it was the feeling that they aren’t alone in their work.

“When you come and you meet people from so many different Muslim countries, and everywhere you see there is a Jewish community, you feel more strength and more calm,” said Rabbi Elchanan Cohen, who serves a community in Almaty, Kazakhstan.

“We have our own sensitivities living in the Muslim countries, and that’s what puts all the rabbis here into [a] common situation,” said Rabbi Shnuer Segal, of Azerbaijan. “We are all facing challenges, and the idea that we can solve them together is something our alliance supports.”

Rabbis take comfort in “the idea that we have someone backing us up, in case we need any connection with the government or with others,” said Rabbi Chaim Azimov of the Turkish Republic of Northern Cyprus.

As such, in addition to philosophical conversations about the future of Jewish life in the Muslim world, the conference also included more practical sessions on fundraising and social media techniques.

The surprise meeting with Erdogan replaced a visit to Istanbul’s Jewish museum and a gala dinner at Neve Shalom, the flagship synagogue of the Turkish rabbinate. But by the second day of the conference the rabbis were back on track with a halachic symposium at Istanbul, led by Iran’s Chief Rabbi Yehuda Gerami and dedicated to their predecessor, Maimonides.

Gerami ultimately left the conference with a brand new Torah scroll to bring back to his community in Iran.