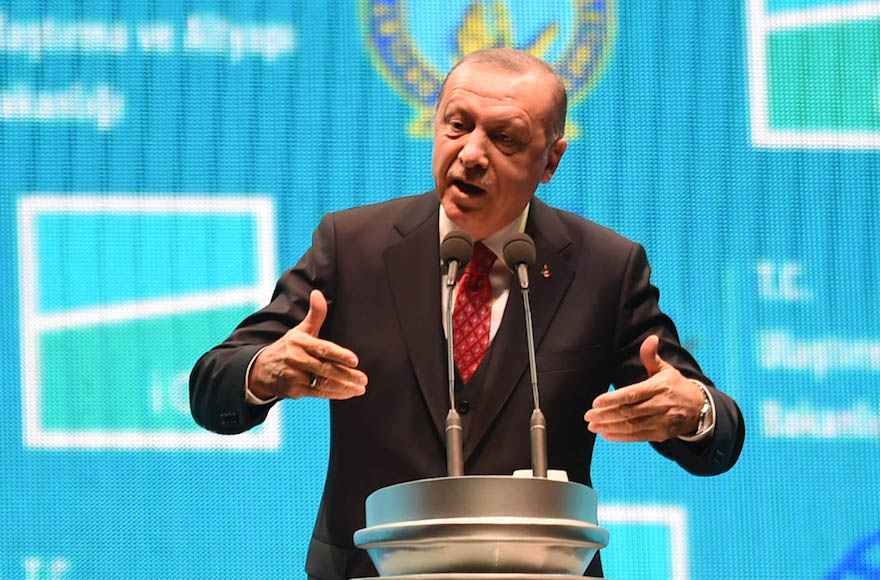 The Jewish Confederation of Turkey said Wednesday that it was “unfair and reprehensible to imply that President Erdogan is antisemitic” in a tweet.

On Tuesday, State Department spokesperson Ned Price said in a statement that “the United States strongly condemns President Erdogan’s recent anti-Semitic comments regarding the Jewish people and finds them reprehensible.”

A day earlier Erdogan, who on multiple occasions has made statements widely deemed antisemitic, made a rambling speech in Ankara following a Cabinet meeting in which he used “Jews” and Israelis” interchangeably.

Erdogan, who said President Joe Biden as “bloody hands,” also claimed that “a Jewish prime minister” had told him on a state visit to Turkey that he enjoyed killings Palestinians, adding that “Attacks by Jews on the Al-Aqsa Mosque have turned into a powder keg.”

Erdogan has often called Israel and Israelis “child killers,” and in 2014 called a protester against his internal policies “seed of Israel.”

But in the tweet defending Erdogan, the Jewish Confederation of Turkey said it cannot concur with allegations that he is antisemitic.

“On the contrary, he has always been constructive, supportive & encouraging towards us,” the tweet said.