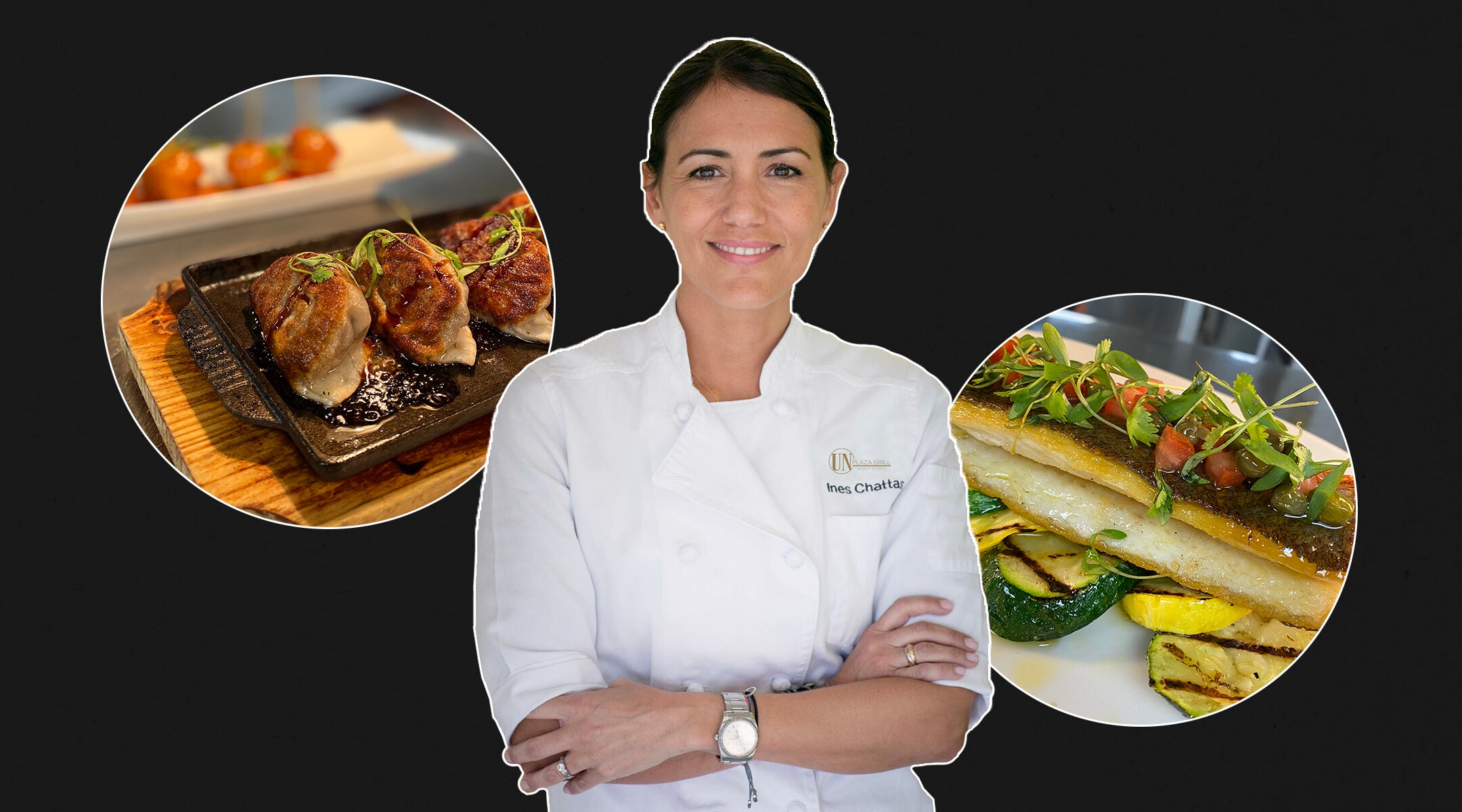 Ines Chattas, the new “culinary director" at UN Plaza Grill in Manhattan, with some of the dishes she has added to spice up the menu: beef potstickers, left, and crispy seared branzino. (Courtesy; montage by Grace Yagel)
Advertisement

(New York Jewish Week via JTA) — Four years ago, businessman Albert Gad opened UN Plaza Grill, an elegant kosher restaurant, in the Midtown East high-rise apartment building in which he lived. The space was gorgeous — high ceilings, tall windows, starched white linens covering well-spaced tables, complete with a view of the United Nations across the street. The food was delicious. The service, refined.

Gad created this upscale kosher restaurant to, in his words, “give people a different feeling about kosher dining.” And it did. People came for the porcini and white mushroom soup, topped with truffle oil and croutons, and for the perfectly grilled center cut ribeye steak.

But no restaurant could halt the nefarious progress of COVID. In March of 2020, the restaurant closed. Gad kept his apartment, but he joined the New York exodus to Miami, to live there full time.

Rather than give up on the restaurant, in which he was heavily invested, Gad reopened it in August of 2020 with the same staff and chef de cuisine — although last month he announced the appointment of Argentinian-born and Miami-based restaurant professional Ines Chattas as its “culinary director.” She is tasked with revitalizing the menu, making it more contemporary and expanding its international feel.

In her new role she brings a range of skills: She cooks. She plans. She designs menus. She crunches numbers. And if more contemporary is what the restaurant needs, Chattas has a cool all her own.

Chattas, 45, has been involved in the hospitality industry for more than 20 years, first in the “back of the house,” at eateries including Miami Beach’s Icebox Cafe, and more recently as a chef at the popular, 10-year-old restaurant Open Kitchen in Bay Harbor, near North Miami. From there she was recruited to be the chef/operator of two residents-only restaurants, including Majestic Tower in Bal Harbour, the building where Gad lives. It was there that Gad became a fan of her food and her business savvy.

He first asked her to move to New York to work at UN Plaza Grill four years ago.

“I never took it seriously. I have three businesses in Florida!” said Chattas. But this fall, after a trip to New York to see the restaurant and meet the staff, she agreed. She would continue running her Florida eateries, but she would add UN Plaza Grill to her very full plate by coming in as a consultant.

Keep the chef. Keep the staff. As culinary director she would tweak the existing menu, add more international and “hip” elements and take it to the level where she and Gad believe it belongs.

Chattas is also a new face in an industry dominated by men.

“She is one of less than a handful of women in the top position in a kosher restaurant in Manhattan,” said Elan Kornblum, founder of Great Kosher Restaurants Media Group. Women in the kosher restaurant business have noted that the industry’s long hours and late nights can be difficult to balance with their traditional communities’ expectations about raising a family.

Chattas is excited by the challenge, but there has been a learning curve. Chattas is Jewish but did not grow up keeping kosher. Her great-great-grandparents were Jewish gauchos, brought to Argentina with other immigrants from Eastern Europe at the end of the 19th century by Baron Maurice de Hirsch, the German Jewish financier and philanthropist. She has warm memories of her great-grandmother Clara’s chicken matzah ball soup — and she replicates that flavor in her own — but she has never before worked in a kosher kitchen. 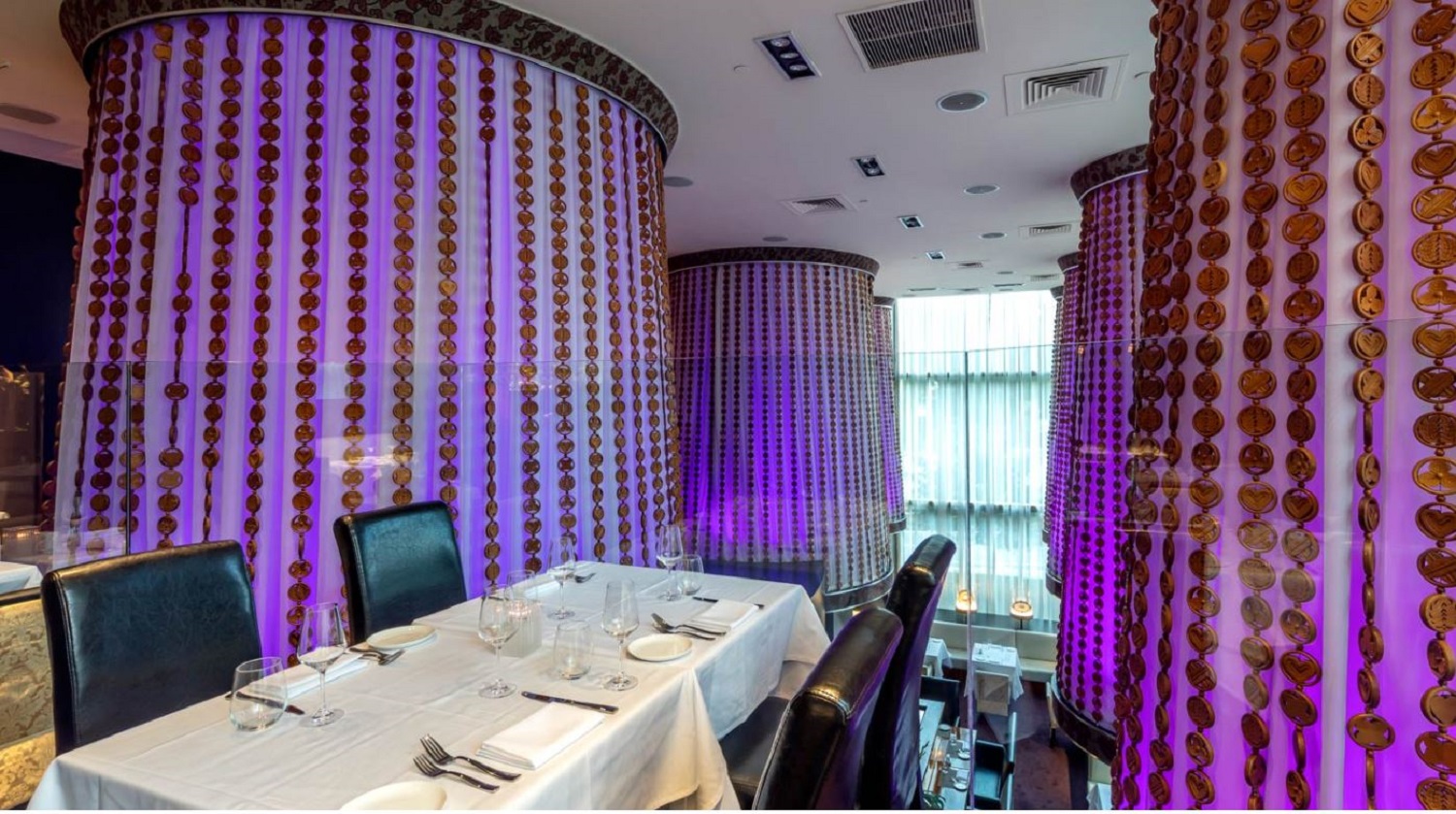 The mezzanine at UN Plaza Grill, on New York City’s East Side. (Courtesy)

Working under the guidance and tutelage of the restaurant’s mashgiach (kosher supervisor), Chattas has made changes. You can still get the perfectly grilled steak au poivre from the old menu but now it comes to you as filet mignon au poivre with a peppercorn sauce – derived from the non-dairy Tofutti.

“I found that Toffuti gives a creaminess to the sauce,” she said. “I am happy with how it came out.”

Chattas’ multicultural background comes through, too. She describes herself as a “complete mutt,” with food and family roots in Germany, Georgia, Italy, Spain, France, Hungary, Lebanon and Syria. She credits her Syrian stepfather with teaching her how to make spiced kefta meatballs, a new addition to the menu, flavored with baharat, cinnamon and cumin. The veal schnitzel, topped with salad, is a nod to Argentina, where it is a ubiquitous restaurant offering.

Plans are underway to give the restaurant a facelift. “We are finalizing the design of a new bar,” said Chattas. “People love to sit at a bar. It automatically creates a scene. Every place in town that is happening has one. We are planning Saturday night events with tapas, mixed drinks and a DJ.”

With the United Nations as their inspiration, Gad and Chattas will further internationalize their menu for the benefit of the kosher community and the diplomatic corps.

“We are planning a world tour,” said Chattas. “We will highlight a different country every month and organize it in a way that makes sense. For example, since Bastille Day is in July, July would be the month for France. We will have a prix fixe menu by a French chef, in collaboration with us, and feature kosher French wine.”

At a dinner there recently, several days before the latest Omicron-induced COVID wave, change was on the plate. Chattas’ braised boneless short ribs, flavored with herbs and spices, were both comforting and daring. You could taste the requisite onions and garlic in the sauce but the pink peppercorns and allspice were there, too.

But that was then and this is now. How will the Omicron variant impact Gad and Chattas’ plans going forward?

“The pandemic is here to stay,” said Gad. “People are not going to shut themselves up inside.” Chattas is hoping that this latest uptick will be, in her words, “in and out.”

But look out for them during NY Winter Restaurant Week (Jan. 18 through Feb. 13). They will be there, offering highlights from their menu: curried lamb samosas with mango salsa, short rib ragout with spiced tomatoes and, of course, center cut rib eye. And if you can’t make it there, the entire menu is available for take out and delivery.