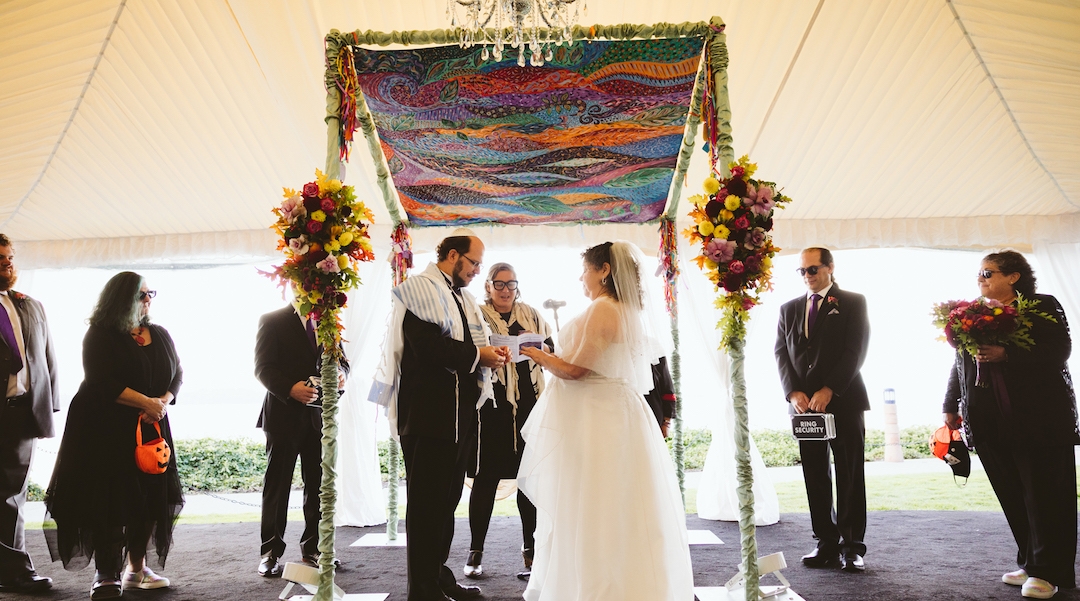 Ben and Julie Schreiber were married Oct. 10, 2021, in Kirkland, Wash., under a huppah whose design incorporated blessings from their friends and wedding guests. (JennyGG Photography)
Advertisement

(JTA) — Julie Plaut Warwick and Ben Schreiber faced the same dilemma as many other couples planning a wedding during the pandemic: How to create a feeling of togetherness when guests may not feel safe attending?

“We wanted to be surrounded by our family and friends and have their blessings, as we had no idea who would actually come,” said Plaut Warwick, of Issaquah, Washington.

The “Jewish creatives” they tasked to help them had ideas. And collaboratively, they figured out a way for the couple to be surrounded by the blessings of those important to them, whether they were there physically or not.

Invited guests were instructed to write down their blessings for the couple. A wedding co-officiant then collected the blessings and hung them from the poles of the huppah, the traditional Jewish wedding canopy, while the themes from those blessings were then inscribed on the border of the couple’s ketubah, or marriage contract. They were also chanted by all the guests during their ceremony.

The couple had some idea of what was in store for them — but they didn’t know everything.

“The news about the ketubah and a song coordinated with our huppah blessings trickled down to us slowly,” said Schreiber. “By the time we saw and heard the song, we knew it was happening, but it was like a step-by-step leak.”

Plaut Warwick, 56, is a laughter yoga instructor, mental health professional and Jewish educator. Divorced since 2006 and the mother of two adult children, she thought she would never again marry.

Schreiber, 52, is a senior software engineer at the biotech company Adaptive Biotechnologies, as well as a widower; his wife died of cancer in 2019.

They first met through the Reform Congregation Kol Ami in Kirkland, Washington, where Plaut Warwick was a longtime member and Schreiber was a newcomer. It was only months after they friended each other on Facebook that she commented on something he shared. They began online chatting the day after Thanksgiving, 2020.

Their chats continued over several days. Schreiber suggested a visit (he was living at his beach house three hours away from her during the pandemic). But Plaut Warwick was about to visit her elderly parents for a month in Florida, and didn’t want to take any chances. Yet she soon changed her mind.

“The second he walked in and we embraced, I knew I was going to marry him,” she said.

Schreiber felt similarly, adding that his late wife had given him her blessing to find love again. “I fully acknowledged that I’m in a broken state, but I knew I needed companionship, and the pandemic left me with a vacuum of not being with anybody that was good to help me recenter,” he said.

He didn’t leave until he drove her to the airport a few days later.

After quarantining for two weeks in Florida, Plaut Warwick stayed with her parents. Noticing she was always on the phone, her father began asking how late she was up the night before.

Judaism and Jewish ritual both play a large role in their lives. The first time the two showed up to Zoom services together was like a coming-out party, they said. Now, they sometimes lead services together. 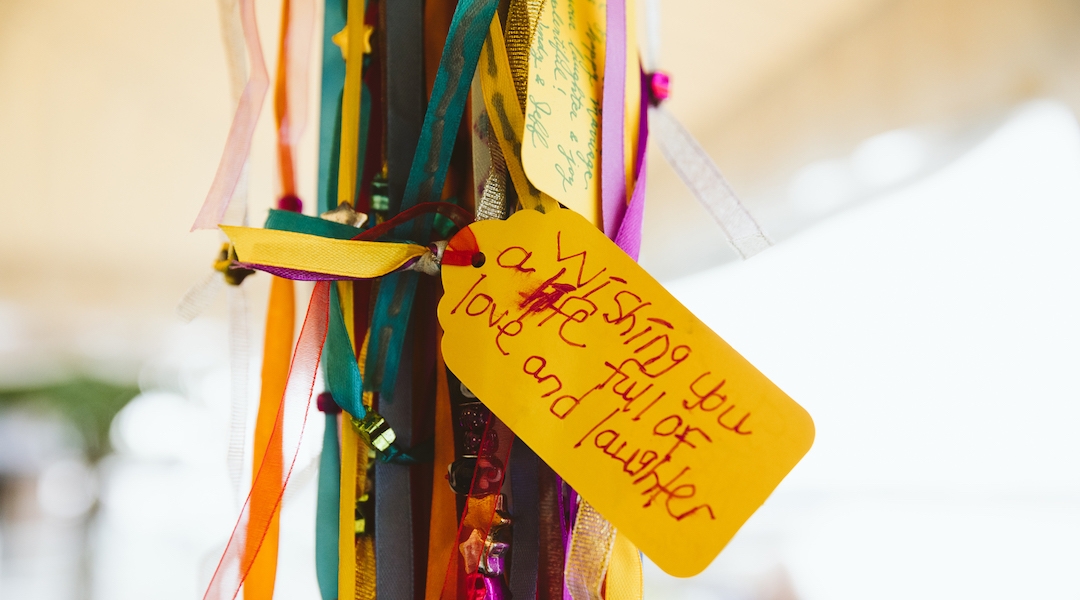 The huppah at the wedding of Ben and Julie Schreiber was affixed with blessings submitted by their guests. (JennyGG Photography)

As for their collaborative wedding, it started with Plaut Warwick’s decision to commission Rhode Island-based artist Nancy Katz, principal artist of Nancy Katz/Wilmark Studios — which specializes in stained glass windows for synagogues — to make the couple’s huppah.

Plaut Warwick knew Katz, co-officiant Marge Eiseman and ketubah artist Jennifer Judelsohn from connections in the Coalition for the Advancement of Jewish Education (CAJE and its successor organization NewCAJE). Their connections allowed them to collaborate on the wedding in unexpected ways.

Plaut Warwick had a tallit made by Katz, who is mostly known for her painting on silk. But Katz had to give that up in recent years due to arthritis in her thumb. She found she can still paint on canvas, and used a lightweight one so it would drape properly.

Her design is bold and bright.

“The huppah was about celebration and joy and connection, but it also acknowledges this crazy time we’re living in,” said Katz. “They talked about their love of water and the sea, so the design has that fluid feel to it; the design just sort of came.”

For the guests, Katz sent out kits she had assembled herself for writing down and decorating their blessings. She led a Zoom workshop for those who wanted guidance in decorating them. 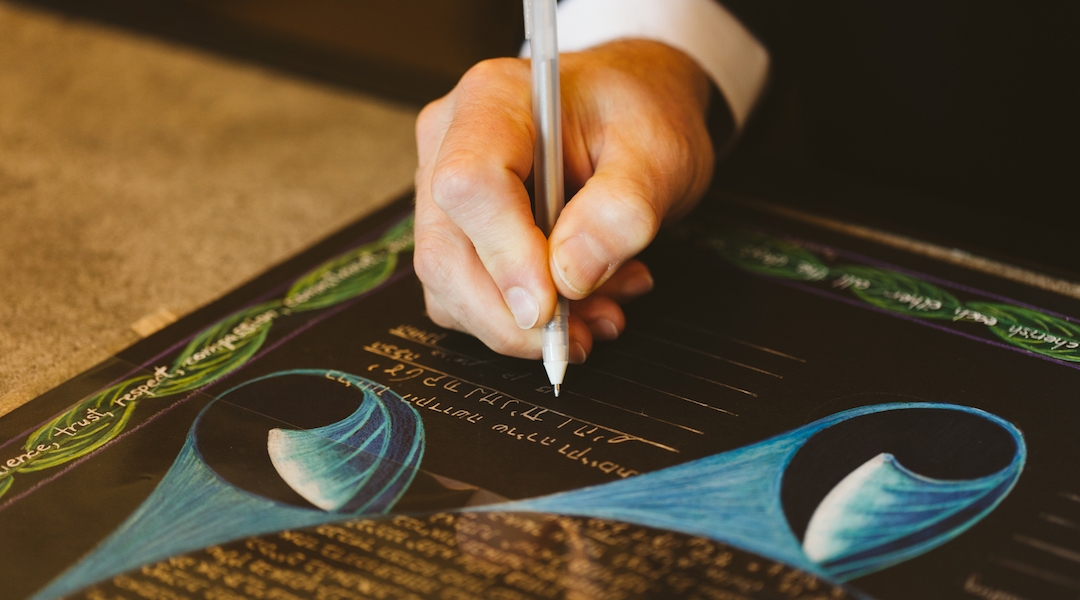 Ben and Julie Schreiber’s ketubah was hand-painted with designs inspired by themes from their guests’ blessings. (JennyGG Photography)

The couple joined the Zoom session to greet everyone, and then left. Then, inspiration struck Judelsohn: “While we were creating the blessings with Nancy, I saw the blessings around the ketubah,” she said. “In my original design, it was going to be a floral or leaf pattern.” Instead, Judelsohn decided to incorporate themes from the chuppah blessings into the design of the ketubah.

“I started by pulling out the words that were used the most,” said Judelsohn, which is how words like “joy” and “laughter” ended up along the ketubah’s borders.

Meanwhile, since Eiseman, who is a songleader and Jewish educator, was to co-officiate the wedding with Kol Ami’s Rabbi Yohanna Kinberg, she began thinking what her unique contribution could be.

The end result, in which Kinberg and the wedding guests sang their blessings collectively, was “less a song than a ‘sound bath’ using the words everyone had offered,” she said. “This was not just me singing to them, but we engaged everyone in the singing.”

The wedding took place October 10 at the Woodmark Hotel in Kirkland, Washington, in front of approximately 100 guests, all of whom had been tested for COVID-19.

“A lot of it was meant to be tongue and cheek because COVID has just robbed people of their joy,” said Plaut Warwick, explaining why the wedding party consisted of two 50-something women, dubbed “flowerchicks,” who threw petals from felt jack-o-lanterns and groomsmen called “Ring Security Dudes” who carried lockboxes for the rings.

As for the chuppah and ketubah? They are now both displayed next to each other in their home.

​​”They just make me smile every time I walk by them,” said Plaut Warwick, who has since taken the name Schreiber. “They are both so colorful and meaningful. When we buy a house, we need one with large walls.”

This story is part of JTA’s Mazels series, which profiles unique and noteworthy Jewish life events from births to b’nai mitzvot to weddings and everything in-between.