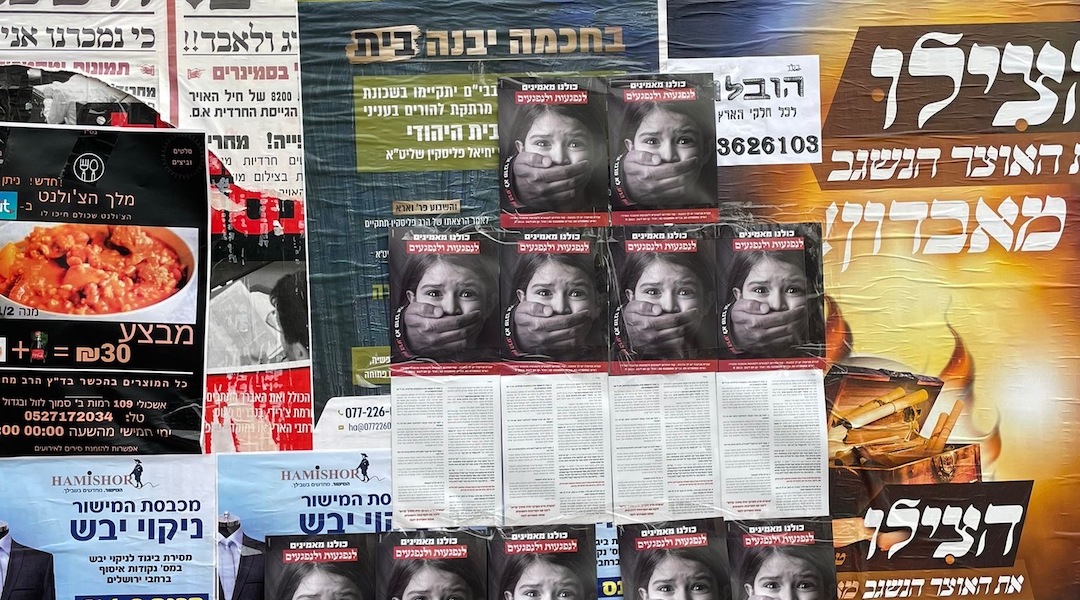 Nearly 350,000 flyers expressing support for victims of sexual abuse were distributed in Orthodox communities across Israel by a group of volunteers Friday. (Courtesy Shoshanna Keats-Jaskoll)
Advertisement

(JTA) — On Friday morning, most of the people bustling through Beit Shemesh, a town in central Israel with a large haredi Orthodox population, were getting ready for Shabbat. Shoshanna Keats-Jaskoll had a different mission.

Keats-Jaskoll was handing out flyers with messages of support for victims of sexual abuse, in a public display of solidarity at the end of a wrenching week in many Orthodox communities.

At the beginning of the week, Chaim Walder, a celebrated haredi Orthodox children’s book author in Israel, died by suicide after being accused by numerous children and young women of sexual abuse. The Ashkenazi chief rabbi of Israel visited Walder’s family. Then, on Thursday, one of Walder’s alleged victims, Shifra Horovitz, also died by suicide, her friends saying she had been distraught by the response to his death.

For Keats-Jaskoll, a cofounder of the Israeli advocacy organization Chochmat Nashim, which fights extremism and sexism in the Orthodox community, and for many other Orthodox women, the litany called for a coordinated, public response. So she, who is Orthodox but not haredi, and a network of haredi activists and volunteers printed 350,000 flyers and passed them out in haredi areas before Shabbat.

Most of the reactions she got were from mothers thanking her for sharing her message, she told the Jewish Telegraphic Agency. But one man told her he didn’t know anyone who had been hurt and questioned why she was giving out the flyers — keeping up the conversation for far longer than she expected.

The flyers that Keats-Jaskoll and others handed out spoke directly to that crisis of faith, and to the religious values of those whose confidence in their leaders might be teetering. They offered information about the rabbinic court that heard testimony against Walder, quoted rabbinic sources about the seriousness of sexual abuse and answered questions about why allegations first reported in secular media should be trusted in religious communities.

Since the allegations against Walder first appeared in November, the case has taken an unusual trajectory in the Orthodox world. After Eichler’s, a Jewish bookstore in Brooklyn, announced that it would stop selling Walder’s books in response to the Haaretz investigation, many other repudiations of Walder followed, in a flood that advocates for survivors of sexual abuse said seemed to represent a watershed moment for the community.

But after Walder’s suicide, it became immediately clear that any shift extended only so far. In a number of haredi schools, teachers reportedly spoke to students about Walder’s suicide as an example of the dangerous effects of “lashon hara,” or speaking negatively about another person, and parents were counseled not to discuss the issue in detail with their children.

At Walder’s funeral, Dov Weinroth, a lawyer and friend of Walder, called out the journalists at Haaretz who first published the allegations against Walder as “murderers.” And in the days after Walder’s death, multiple haredi Orthodox publications published obituaries of Walder that ended with the phrase “may his memory be a blessing” while failing to mention the allegations agains him.

Yet social media has given rise to a different kind of reaction: photos of Walder’s books in the trash and poignant accounts of difficult conversations between parents and children about abuse and what constitutes inappropriate touching. A social media campaign Monday generated a flood of complaints to haredi magazines about their coverage. And the crowdfunding campaign to print a second run of flyers has raised nearly $70,000 in just a few days.

“There’s a dissonance between how people are responding in their homes and the way the institutions are responding,” Keats-Jaskoll said.

There are signs that the dissonance is having an effect on traditional institutions. After being criticized for visiting Walder’s family, Ashkenazi Chief Rabbi David Lau called for victims of sexual abuse to come forward. Weinroth, too, made an about-face, apologizing for criticizing the reporters who broke the story in a Facebook post Thursday that urged readers to “believe the complainants.”

“I picked up the phone and called Aaron Rabinowitz,” Weinroth wrote, referring to one of the Haaretz reporters who broke the story about Walder. “Truthfully this was the first time, and for a simple reason: to apologize. At the end of the day, I had never spoken with him but I got up at the funeral and demeaned him.”

Rabbi Natan Slifkin, author and director of the Biblical Museum of Natural History in Beit Shemesh who writes the blog Rationalist Judaism, compared the reaction to the Walder story to the haredi community’s reaction to the stampede at Mount Meron in April last year where 45 men were killed during an annual religious gathering.

“The fact that Walder, clearly emerging as a horrific predator, was glorified after his death by important charedi rabbis and politicians and newspapers, while those who attempted to scream about the dangers are being branded as evil gossipers who drove him to his death, is just too much for many people in the charedi community,” Slifkin wrote.

While calling out those who blamed the victims for Walder’s death and those who encouraged silence rather than shaming abusers, Slifkin noted the signs of change, including an editorial in Mishpacha magazine’s Hebrew edition, which, in an unusual move, spoke directly about the topic of sexual abuse.

“They [the victims] are not the guilty ones. They are not the abusers,” the magazine write. “To them we say in the name of the entire haredi community: our hearts are with you. We support you and we believe you, unconditionally. And we will do everything in our power as a community to build a safer and purer world for you.”

For Keats-Jaskoll and other activists in the haredi Orthodox community, the fallout from the Walder case is indeed a watershed moment — and one that has to do with a broader phenomenon of people taking matters into their own hands after questioning their religious leaders.

“I see more more and more and more people come to that realization of we have to do this, we can’t wait around,” Keats-Jaskoll said.

“I think COVID helped with that, I think seeing what happened with COVID with leadership denying what was happening with COVID and watching people get sick and die, it kind of took a lot of people and shook them up and say maybe our leadership doesn’t know everything,” she said.

She’s doing everything she can to help activists within haredi communities speed the change — while fearing that it won’t come fast enough for victims of sexual abuse.