Eric Adams has deep ties to Brooklyn’s Orthodox Jews. Will he reach beyond them as mayor? 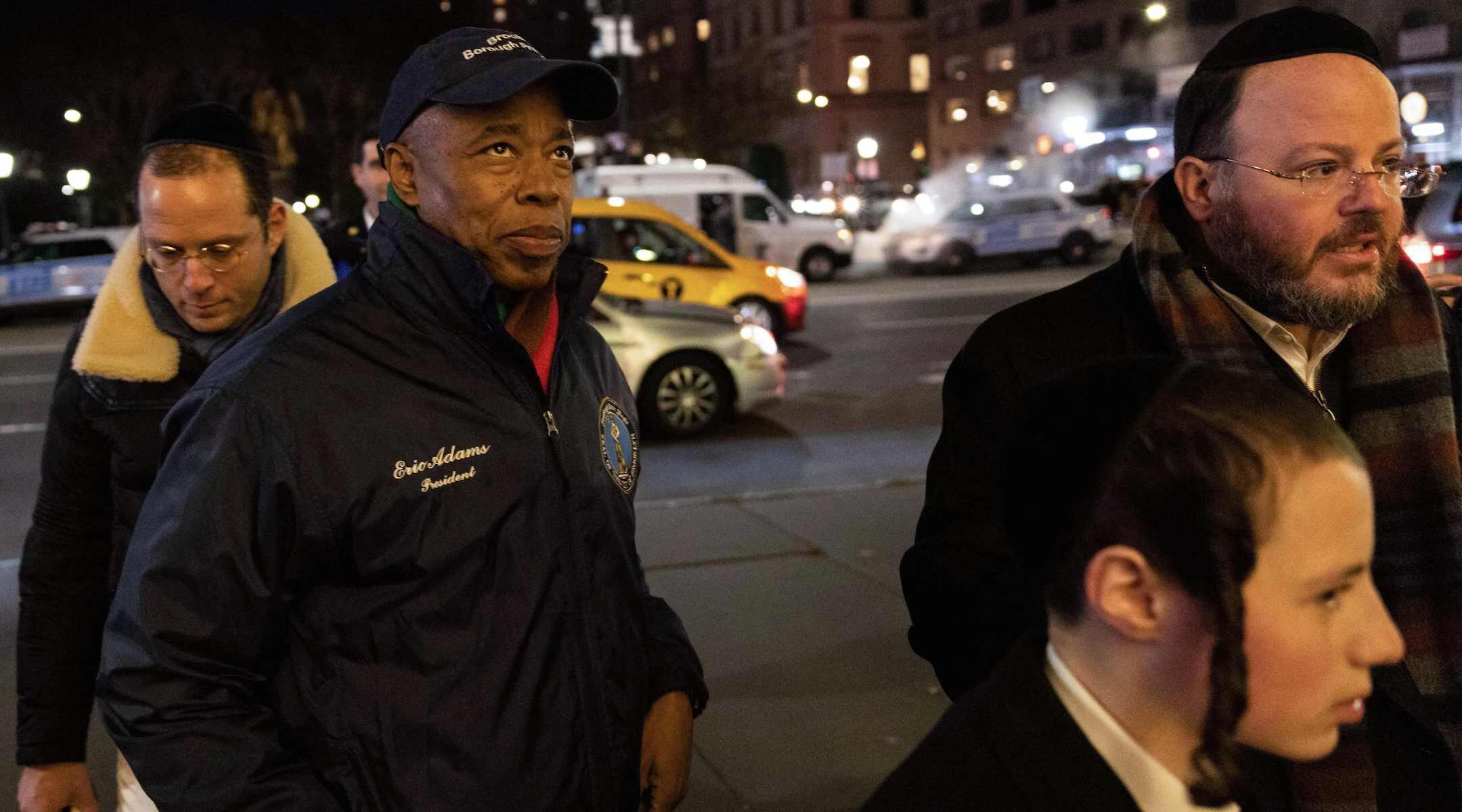 Eric Adams attends a celebration of the first night of Hanukkah at Grand Army Plaza in Brooklyn on November 28, 2021. (Yuki Iwamura/AFP via Getty Images)
Advertisement

Behrman, the chairman of public safety for Community Board 9 in Crown Heights, has known Adams for years — ever since he became the neighborhood’s state senator in 2007. Since that time, Behrman has felt that Adams, a moderate Democrat and former police officer and Brooklyn borough president, has had the Jewish community’s back when it comes to combating crime and antisemitism.

When Adams won the mayoral election in November, he appointed Behrman to his 74-member clergy transition team, which included 17 rabbis.

“Eric Adams knows every Jewish leader in Brooklyn,” Behrman told The New York Jewish Week. “If you’re talking about the Orthodox community, he knows everyone. He knows them for years. He has their cell phone numbers, he has their email addresses.”

Of course, Behrman isn’t Adams’ only Jewish ally. The mayor’s Jewish support largely derives from his long career in Brooklyn, which has several heavily Orthodox neighborhoods, including Borough Park, Williamsburg, Crown Heights and Flatbush. Other Orthodox leaders in Crown Heights and elsewhere were part of the outer-borough coalition he mobilized to win the race last year.

During Adams’ transition, most of the rabbis on his clergy team were Orthodox. Now, Adams has appointed two Orthodox men to senior positions in his administration: Menashe Shapiro as deputy chief of staff and Fred Kreizman as commissioner of the Community Affairs Unit. Kreizman was previously the unit’s Brooklyn director, and Shapiro was an adviser on Adams’ campaign. Both graduated from Yeshiva University, the Orthodox-affiliated school in uptown Manhattan.

Like a third Jewish appointee, director of public service engagement Andrea Shapiro Davis, the men were also staffers for former Mayor Michael Bloomberg. A fourth Jewish appointee is Edward Mermelstein, a Russian-Jewish lawyer who will be commissioner of international affairs.

The administration did not respond to requests for comment about the appointees.

Given the mayor’s long career in Brooklyn, it’s no surprise that he has deep alliances with Jews there as opposed to the other boroughs, said Stu Loeser, a longtime adviser to Bloomberg who supports Adams. Loeser added that deputy chief of staff Shapiro, who lives in Manhattan, can help familiarize Adams with other Jewish communities in the city.

“As Brooklyn borough president, Eric Adams did not have a need to really know what’s going on on the Upper West Side or Washington Heights, or have someone explain to him how neighborhoods are changing and developing in Queens, and those are all things that Menashe can add to,” Loeser said.

Progressive and non-Orthodox Jewish activists in the city worry that Adams’ attentiveness to Orthodox communal concerns could come at the exclusion of the rest of the city’s Jewish community. Of the 17 rabbis on his transition team, only one was a woman — Rabbi Stephanie Kolin, who did not respond to a request for comment.

“I am hoping that he does not make the mistake that Mayor [Bill] de Blasio made, which was to see the Jewish community in a very narrow and skewed way, and to really only recognize the Orthodox leadership of the community,” said Rabbi Rachel Timoner of Congregation Beth Elohim, a Reform synagogue in Park Slope, Brooklyn. “The majority of Jews in New York are liberal Jews and belong to the Reform, Reconstructionist, Conservative movements, or are unaffiliated.”

Timoner is a co-founder of the New York Jewish Agenda, a progressive group active on local politics that has advocated for vaccine mandates, efforts to stop antisemitism, affordable housing measures and action to combat climate change. The group would like to be in closer touch with Adams, said Matt Nosanchuk, the group’s president. He added that he would like to see the mayor appoint more liberal Jews to his administration.

“We hope that the mayor includes the liberal, mainstream Jewish community in his appointments,” Nosanchuk told The Jewish Week. “People are policy, and his appointments should reflect the voices and values of the majority of Jews in the city with the largest Jewish population of any city in America.”

Religious observance does not itself determine political positions, and there are issues of common ground across the New York Jewish community. Everyone the Jewish Week spoke to emphasized the need to combat antisemitism, for example. Multiple people said that in the city, Jews largely have the same concerns as other New Yorkers.

“Most of the issues facing the Jewish community face New York in general, especially when it relates to small business, affordable housing, healthcare and public safety,” Behrman said. “We all want the same thing.”

Beyond the Jewish community, progressives across the city have been ambivalent toward Adams, who used to be a Republican and ran as a moderate emphasizing law and order. Sophie Ellman-Golan, director of strategic communications for Jews for Racial and Economic Justice, a progressive group, told The Jewish Week that she’s most concerned about Adams having appointed Republicans, lobbyists and former Bloomberg staffers.

Adams has also maintained long standing contacts with non-Orthodox Jews in his home borough. Timoner said Adams was in touch with her when he was Brooklyn’s borough president, inviting her to speak at times at Borough Hall, and that she has a “great relationship” with Pastor Gil Monrose, Adams’ faith director.

When asked by The Jewish Week last year to name people who advise him on Jewish affairs, Adams included on his list both Timoner and Rabbi Linda Goodman, the former rabbi of Union Temple, a Prospect Heights Reform congregation that has since merged with Timoner’s synagogue.

Goodman told The Jewish Week that “Eric Adams is one of my favorite people” and that he was “a good friend to our congregation.” But she said she has not been in touch with him since she retired in 2018.

Abe Silberstein, a member of the Brooklyn Democratic Party County Committee, said Adams may have close relationships with Orthodox leaders in the borough because, “In general, Orthodox community institutions and leaders have done a much better job connecting with local politicians.”

But Silberstein said that by virtue of his position, Adams will inevitably become more familiar with non-Orthodox Jewish activists.

“I imagine if he hasn’t already come into contact with more progressive Reform and Conservative Jewish voices, that will happen very soon,” he said. “Especially with the advent of groups like NYJA, and just people being more active on issues Adams is likely to deal with, whether it be police reform or education, they’re going to at some point come in contact with him. Whether or not he takes them seriously is a different question.”