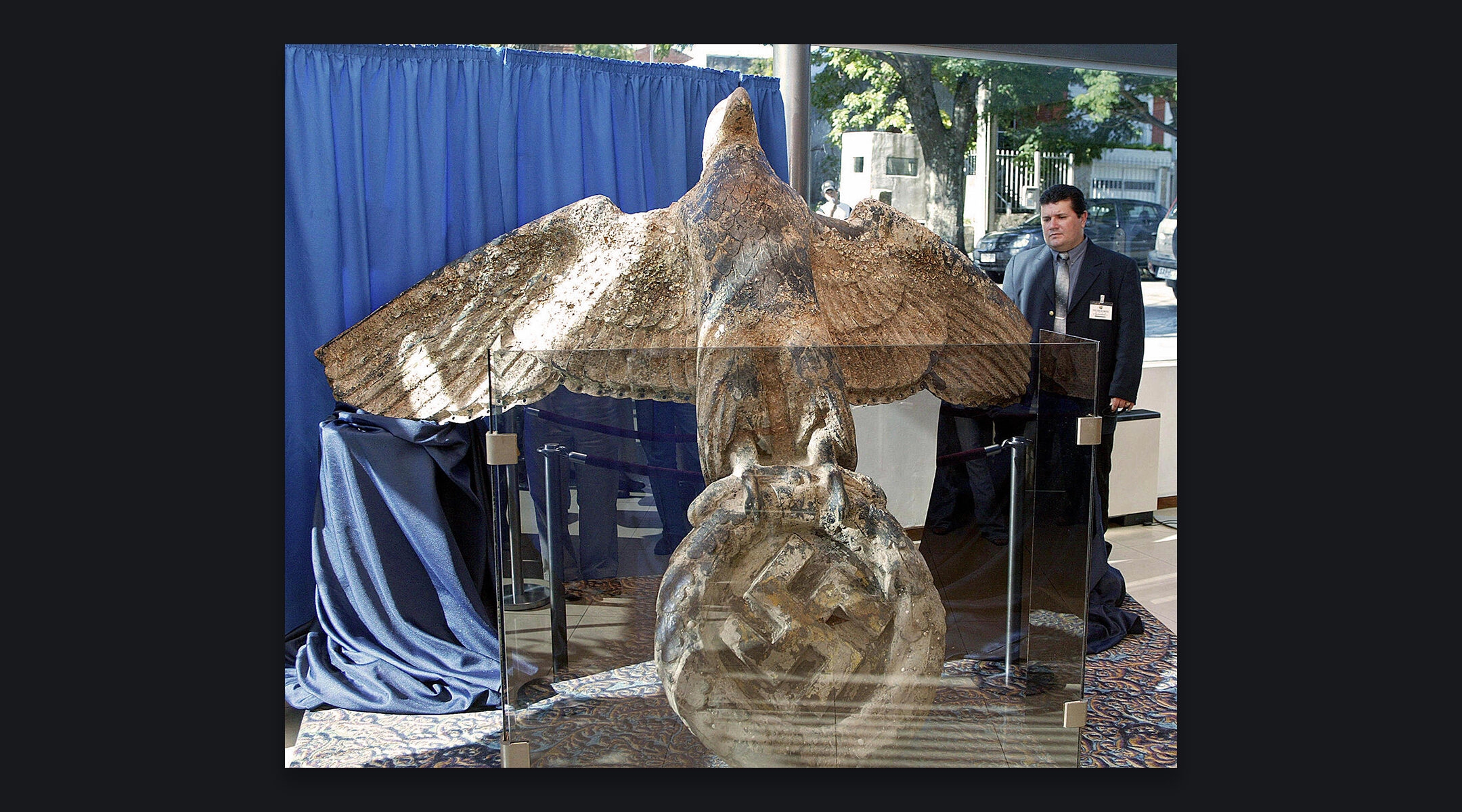 A security guard looks at the bronze eagle recovered from the stern of the German Graf Spee battleship, on display in Montevideo, Urugay, Feb. 13, 2006. (Miguel Rojo/AFP via Getty Images)
Advertisement

PUNTA DEL ESTE, Uruguay (JTA) — A Jewish businessman has offered to buy an 800-pound eagle and swastika crest from a former Nazi ship that is sitting in a Uruguay warehouse and explode it into “a thousand pieces.”

A private expedition recovered the 6-foot-tall Nazi swastika and eagle crest in 2006. It had been affixed to the front of the Admiral Graf Spee Nazi warship, which was scuttled by British ships in a Montevideo harbor in December 1939.

After its recovery, the eagle was briefly shown to the public in Montevideo, sparking controversy. Germany criticized the display of “Nazi paraphernalia” and the eagle was moved to a naval warehouse. It was nearly put up for auction, but the head of the Uruguayan Jewish Committee and others objected, arguing that it could end up in the wrong hands. It was reportedly offered to Israel’s Yad Vashem Holocaust museum, which rejected it.

In 2019, a Uruguayan court ruled that the government must auction the crest, and that the proceeds must go to the investors behind the team that recovered it. Past reports claimed that buyers had floated offers in the tens of millions of dollars.

Argentine Jewish businessman Daniel Sielecki, 64, who now lives in Uruguay, told a local news site that he wants to buy the eagle — and subsequently destroy it — to keep it out of the hands of neo-Nazis.

“Once I have it in my possession, immediately I will blow it into a thousand pieces,” he said. “Every piece that results from the explosion will be pulverized… There will be nothing left.”

Sielecki is one of the heads of the yacht club in Punta del Este, which is a popular summer destination for South American Jews.

German officials have since changed their posture, saying that they would allow the eagle’s display in an educational museum context. The Simon Wiesenthal Center issued a statement in July, urging Uruguay to display the crest in a museum instead of sell it to an open market.

“Both the German authorities and the Wiesenthal Center have taken the position that such artifacts can not[sic] serve a growing extreme right market and white supremacists,” wrote Shimon Samuels, the center’s director of international relations. “We urge the Uruguayan authorities to ensure that the display of these symbols serve as a warning to future generations of what should never be repeated.”