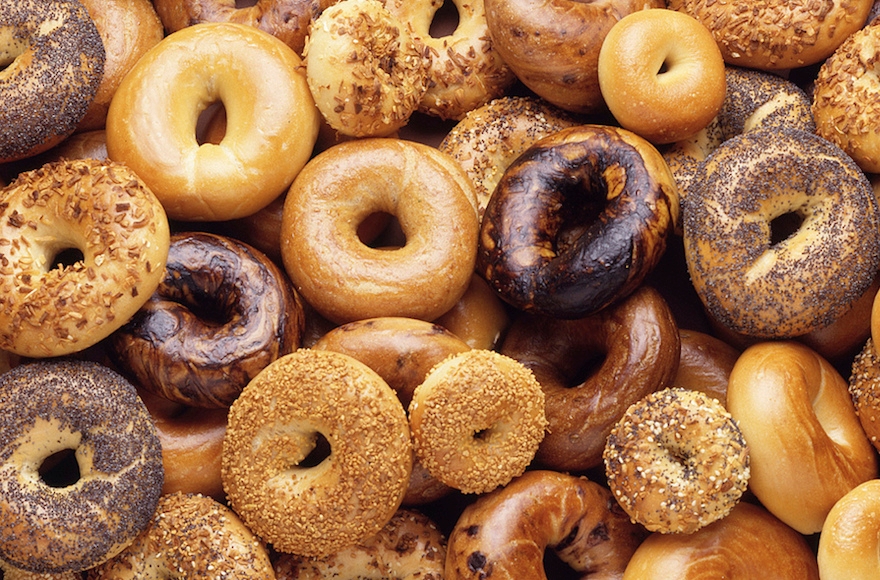 (New York Jewish Week via JTA) — In honor of National Bagel Day this Saturday, GrubHub released data on the most popular bagels in New York City — and the results might surprise you.

The online delivery platform looked at what New Yorkers ordered via its service in 2021. Let’s start with the most popular bagel variety in the five boroughs: The winner  is — drum roll — everything.

That’s a relief — everything is everything! But from there, things get a little suspect: Cinnamon, onion, blueberry and jalapeño take up spots two through five on the list of the most popular flavors. Seriously — what self-respecting New Yorker is ordering a cinnamon or jalapeño bagel? Reveal yourself! Whatever happened to the simple sesame? The classic poppyseed?

Of course, these stats are purely from GrubHub orders — they don’t factor in other delivery services like Seamless or UberEats, as well as phone orders and the old-fashioned method of showing up somewhere in person.

Still, GrubHub’s data offers an interesting peek into the bagel habits of neighbors. The most popular bagel shops in the city, for example, are nearly evenly split between Queens, Manhattan and Brooklyn.

Utopia Bagels out in Whitestone, Queens takes the prize as the most popular bagel store in the city, followed by the Upper East Side location of Tal Bagels, Astoria’s Brooklyn Bagel & Coffee Company, and Forest Hills Bagels in Queens.

Tompkins Square Bagels is one of the most popular bagel shops in New York, according to GrubHub. (Julia Gergely)

GrubHub also tracked the most popular bagel sandwiches. Coming in at number one is the classic (if very not kosher) bacon, egg and cheese bagel sandwich. It’s sans bacon counterpart takes the number three spot, with a lox with scallion spread combo sandwiched in between the two (finally, I feel seen!). Fourth on the list is a B.L.T. bagel sandwich, followed by ham and egg, which, isn’t that a New Jersey thing?

Interestingly, GrubHub did not appear to release any information on the most popular cream cheese orders (no word on whether the cream cheese shortage had anything to do with that). Given the truly wacky variety of flavors on offer at many local bagel shops — Oreo, birthday cake… bacon cream cheese, anyone? — I think it’s probably a good thing they kept that to themselves.