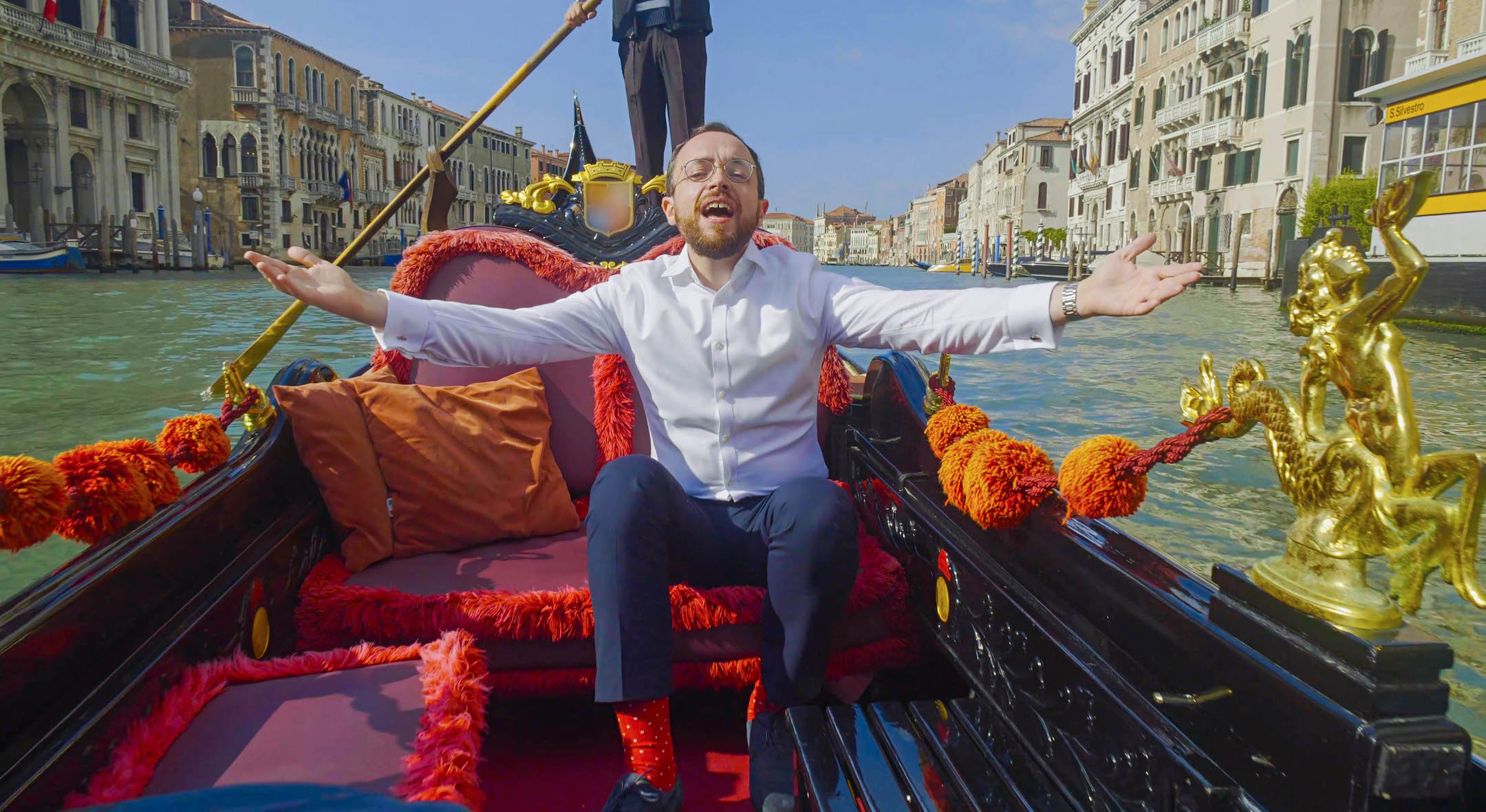 Cantor Yisroel Leshes filmed his first music video for his song "Younger World" while on vacation in Venice, teaming up with local Venetian directors and cinematographers. (Courtesy)
Advertisement

(New York Jewish Week via JTA) — Right before COVID hit in the spring of 2020, Yisroel Leshes was looking to branch out of the world of cantorial music. For most of his professional singing career, he has been working as the assistant cantor at Lincoln Square Synagogue, a Modern Orthodox synagogue on the Upper West Side.

The 35-year-old is a lover of jazz music and jazz bars, so he asked his jazz musician friends — who happen to not be Jewish — what material he should start with.

Their answer surprised him. “Why not take a look at Yiddish theater?” they suggested.

“I always kind of wrote it off. It was something my grandmother listened to — not me,” Leshes, who lives in Brooklyn, told The New York Jewish Week. “But once I started to dig into it, I found that I had misjudged it.”

According to the Milken Archive of Jewish Music, the heyday of Yiddish theater lasted from about 1882 to the middle of the 20th century, back when New York’s Second Avenue was dotted with so many theaters it was known as “Yiddish Broadway.” This unique, Yiddish-language mix of vaudeville and musicals was both a nostalgic preservation of the Old World, as well a reflection on the hopes, anxieties and experiences of new Americans. As the 20th century progressed, Yiddish theater began to die out as Jews assimilated into broader American culture, though it has been seeing a small but popular resurgence in recent years.

“We have over 50,000 albums of material [from Yiddish theater] that almost nobody performs,” Leshes said. And if they are performing it, he added, it is in a nostalgic, traditional way.

So in order to bring Yiddish musical theater into the world of jazz, Leshes had to reinvent the genre. For the past few years, he has been rewriting the old songs from Yiddish theater as modern jazz tunes. “I’m just discovering it all now, and it’s incredible,” he said. “There’s so much amazing material.”

Leshes grew up around Yiddish and speaks it himself, but it is only recently that he has been able to appreciate its modern applications in music and performance.

Last Friday, Leshes released his first music video for his song, “Younger World” (“Yinger Velt” in Yiddish), which he filmed last summer while on vacation in Venice over the course of only a single morning. The original song is actually a reworked, swinging version of the song “Di Zukunft (The Future),” which was written by Yiddish poet Morris Winchevsky in the early 1900s. Leshes worked with jazz arranger Adam Podd to recompose the melody. The result has some of the vibe of “Bei Mir Bistu Shein,” the Andrews Sisters’ 20th-century Yiddish crossover hit, which itself was covered by such jazz greats as Ella Fitzgerald and Benny Goodman.

In the video, Leshes sings his way around the colorful canals — crooning while sitting in a gondola — and walking along the narrow streets. He’s joined by a trumpet player, while his daughter, Shira, dances and laughs with him as they sing about the old world changing into a new era.

“Venice is the most colorful city in the world,” said the Venetian director of the video, Dean Lakić, “It is a superb setting for a song about a brighter future.”

The reception to the song and video, Leshes said, has been great. “People stop me on the street in Brooklyn. I’m so glad to know it’s not just me, that a lot of people are really liking this kind of music.”

Leshes’ appreciation for jazz and Yiddish theater isn’t limited to his own performances. One of his favorite things about jazz, he said, is the experience of being able to see and hear the music in an intimate venue with only a few dozen other people. But because he keeps kosher, Leshes was aware that he was harming jazz clubs’ bottom lines by not purchasing food when he took up a table.

So, Leshes did the next logical thing: In the early months of 2020, he opened The Mansion NYC, a pop-up jazz club in the YJP (Young Jewish Professionals) Mansion, a three-story venue on East 16th St. near Union Square.

The venue was able to host three shows before the pandemic shutdown in 2020; there was kosher food, a bar and about 100 people in attendance at each performance, he said. He showcased Jewish and Israeli Klezmer music, featuring performers Yanke Lemmer, Frank London and Daniel Zamir.

“It was just absolutely magic,” he said. “People loved it. There’s just a very Jewish, heimish atmosphere. Nobody felt awkward or out of place.”

Leshes had planned to reopen this month, before the recent Omicron spike delayed its comeback. He’s waiting until cases are lower before he’ll look into booking acts again.

In the video for “Younger World,” Leshes belts the last lines of the song while sitting on a gondola as it glides along a canal: “Alzo mutik in di reynen, In di reynen, tsu befrayen, Tsu befrayen un banayen Unzer alte velt.”

The video’s subtitles translates this to: “Let’s all have the courage in the ranks to free and rejuvenate our Old World.” It seems he is already doing so.