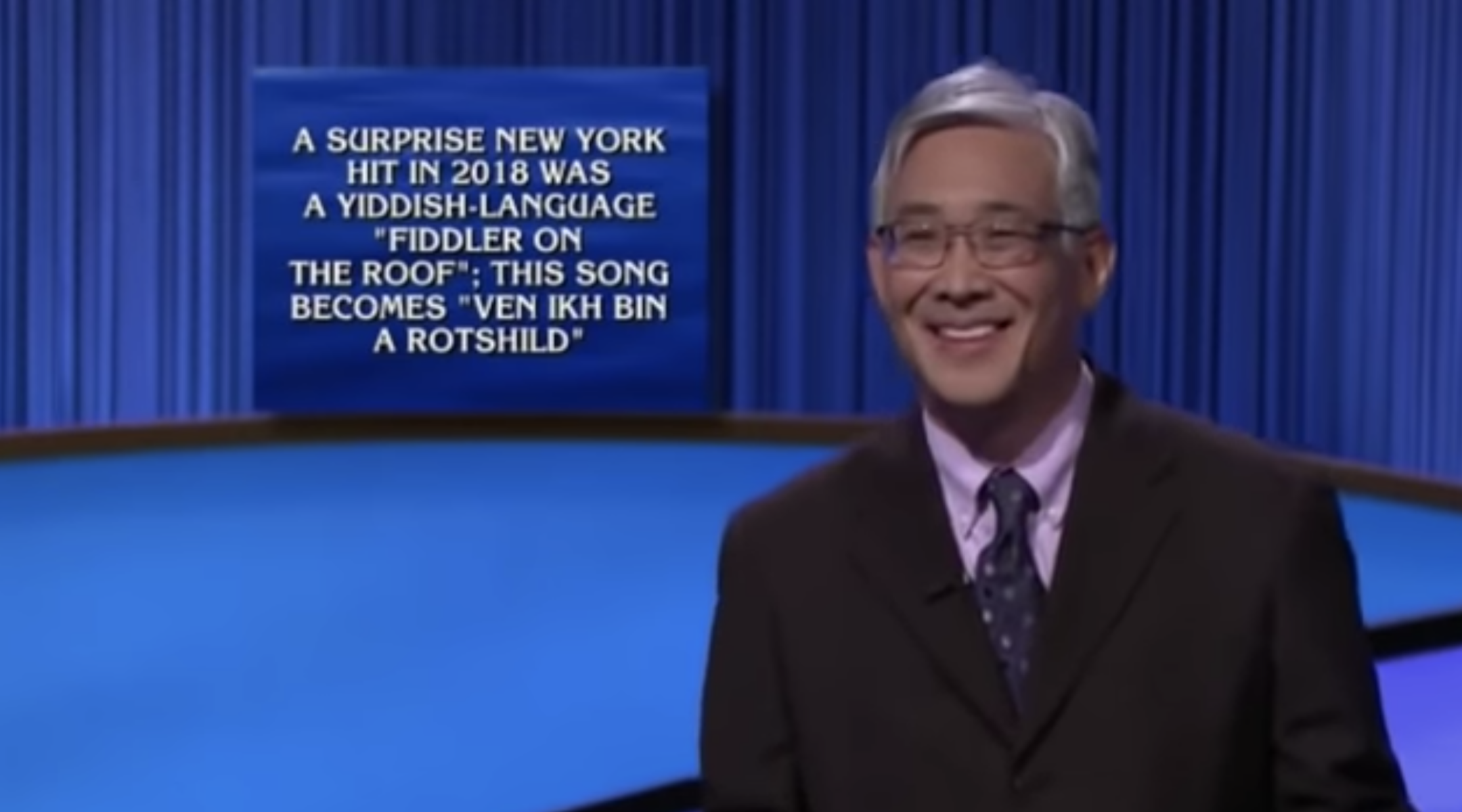 "Jeopardy!" contestant Ed Hashima smiles as he listens to host Mayim Bialik read a question in the Yiddish Theater category in the episode that aired Dec. 9, 2021. (Screenshot from show)
Advertisement

But perhaps its biggest audience yet came on Thursday night, when “Jeopardy!” devoted an entire category to it. The iconic quiz show is seen by an estimated 8.7 million people every night, making it the most-watched syndicated show on the air.

This week, the contestants are all college professors as part of the show’s first-ever professors tournament, and the host is Mayim Bialik, the Jewish actress whose regular-season run was just extended as the show figures out how to replace longtime host Alex Trebek, who died last year.

Julie Williams, an English professor at Rose-Hulman Institute of Technology in Indiana, chose the first question in the Yiddish Theater category after it appeared during Double Jeopardy, the show’s second round.

But it was Ed Hashima, a professor of history at American River College in Sacramento, California, who dominated. He correctly responded to four of the five clues, racking up points as he identified one play as the Yiddish “King Lear,” named the Jewish holiday of Purim as being tied to Yiddish theater’s origins and answered that Marlon Brando’s acting teacher was Stella Adler, who grew up in a family of Yiddish theater royalty.

Hashima also revealed a “Daily Double” in the category, allowing him to select his own wager. A smile broke across his face as Bialik read the clue: “A surprise New York hit in 2018 was a Yiddish-language ‘Fiddler on the Roof’: This song becomes ‘Ven Ikh Bin a Rotshild.”

The response, of course, is “If I Were a Rich Man,” and Hashima added $2,400 to his already substantial lead. One could almost imagine Trebek humming the song’s memorable theme, but Bialik offered no elaboration or commentary about the clues — unlike when cholent was a “Jeopardy!” question earlier this season and she offered a short history lesson.

One clue stumped all of the contestants, who declined to buzz in. “The play ‘Chantzhe in Amerika’ is about a woman wanting to learn this modern play; ‘How I Learned To’ do it is a non-Yiddish play,” Bialik read.

The correct response: “What is ‘Drive,'” referring to the classic work by Paula Vogel, the Jewish playwright whose own passion for Yiddish theater has been a galvanizing force in her recent work.

Speaking recently with the Harvard Divinity Bulletin about her play “Indecent,” which incorporates scenes written by the classic Yiddish playwright Sholem Asch, Vogel offered an insight about why Jeopardy’s non-Jewish contestants might be so knowledgeable about what was until recently a niche ethnic entertainment.

“Yiddish is a language of yearning, a language of anxiety. I believe we’ve worked hard to communicate that love to the audiences,” she said. “We’ve had productions in Omaha, Nebraska, and in Boise, Idaho, where Yiddish is rarely heard. Audiences have said they feel the emotion we are trying to convey.”

On Twitter the day after his victory, Hashima said that he had discussed his Yiddish theater knowledge with Bialik after the episode taped.

“Mayim and I had a conversation after the game about that category and my success with it!” he wrote. “The response? What are a Jewish brother-in-law, many Jewish friends, and a love of all things ‘Fiddler’?!?”