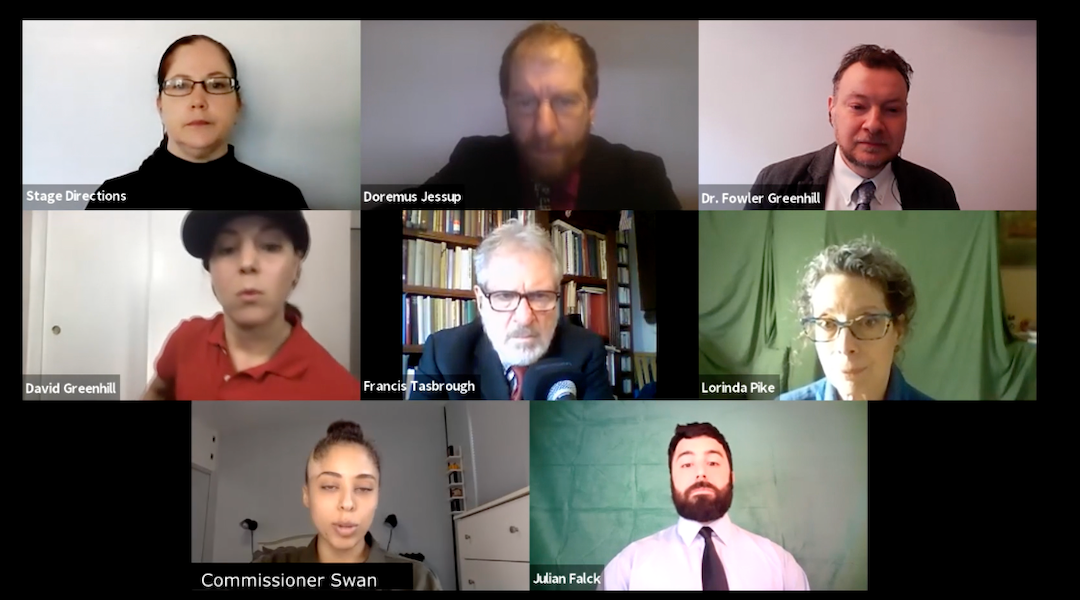 Folksbiene's virtual production of "It Can't Happen Here" features scenes in Yiddish and five other languages. (Screenshot via Folksbiene)
Advertisement

(JTA) — In 1936, Sinclair Lewis’ play “It Can’t Happen Here” was presented simultaneously by 21 theater companies across the country. The controversial play, which tells the story of a populist president who leads the United States into authoritarianism, had special resonance as fascism was spreading in Europe.

This week, it was once again put on by a collective of theater companies, including a Yiddish one, just days before the U.S. election. The reading, performed entirely by actors on Zoom, was released today and is available online through Nov. 1.

“It’s a call to action. We want people to participate in democracy. That’s how we prevent dictatorship from taking hold,” said Motl Didner, associate director of the National Yiddish Theatre Folksbiene, told the Jewish Telegraphic Agency.

Folksbiene, a 105-years-old company housed at the Museum of Jewish Heritage in New York, joined forces with eight other companies to put on the production, which includes scenes performed in six different languages — English, Yiddish, Hebrew, Italian, Spanish and Turkish.

New Heritage Theatre Group/Impact Repertory Theatre, a Black theater company based in Harlem, was also supposed to join but the group dropped out last minute due to “several personal health challenges in the company,” executive producer Voza Rivers said. The company is still marketing the performance to its supporters and Didner said Folksbiene was anticipating it would work together with the theater in the future.

Folksbiene first started thinking about putting on a production of the play last year when staff came across the 1936 Yiddish translation of the script. The original performance was part of a New Deal initiative to fund the arts that staged the play simultaneously in 17 states by 21 theater companies, including the communist-influenced Yiddish theater Artef.

The play was adapted from a novel by the same name published a year earlier by American author Sinclair Lewis. It chronicles the political rise and resistance against fictional populist demagogue Berzelius “Buzz” Windrip, who calls for a return to “traditional” values. After being elected president, Windrip starts setting up a paramilitary force, sends political dissidents to concentration camps and limits the rights of women and minorities.

Bringing together a number of companies, languages and cultures brings with it some challenges too. Since each theater company is doing one or two scenes, the actor playing each part changes eight times. And many of the companies will be performing in foreign languages. To ensure that viewers follow along, each actor’s square will be labeled with the character they are portraying and every scene will be subtitled.

Didner too sees a special resonance with his theater’s Jewish heritage.

“We certainly know what the end result of dictatorship and of anti-Semitism and fascism are. We know that better than anybody else in the world, probably,” he said.

“But there’s also I think an inherent Jewish distaste for dictatorship. It’s inherent in the way that we historically involve more democratic processes even in the Talmud, it’s by committee and by discussion and by interpretation. It’s not one person declaring how we are to interpret the law, but it’s about building consensus. So there’s something I think inherent to the Jewish character that calls for a democratic process.”