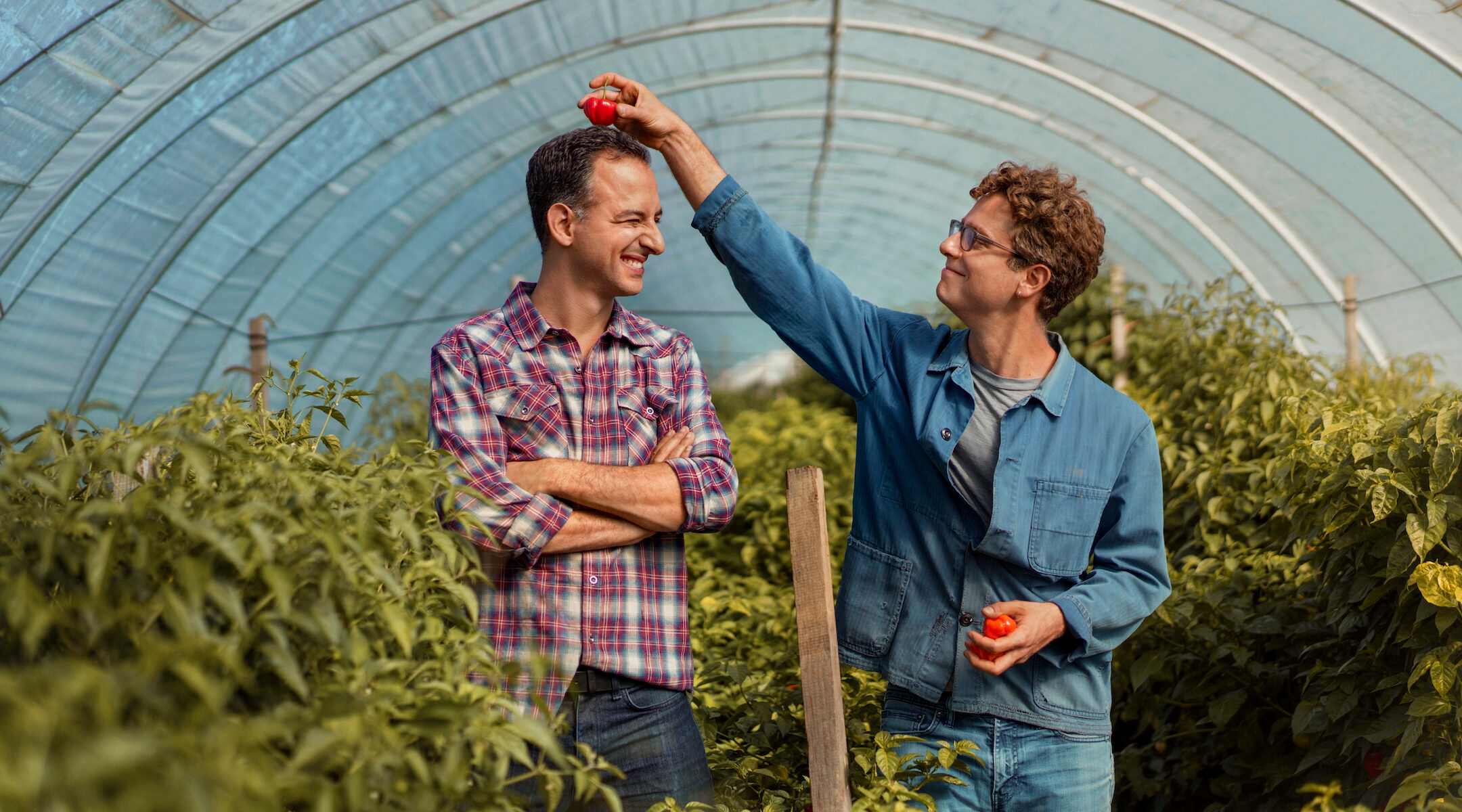 (New York Jewish Week via JTA) — Try to come up with the most Jewish spice out there and you might have some trouble answering. But ask Ori Zohar and Ethan Frisch, the founders of the single-origin spice company Burlap & Barrel, and you’ll quickly get a list of spices with a robust claim to the title.

Zohar, whose family moved to Baltimore from Israel when he was 5 years old, offered up nigella seeds, which are often used in Middle Eastern baking, and cumin, a staple of Middle Eastern savory dishes. But, ultimately, he went with poppy seeds. “Obviously bagels and hamentaschen and all the other wonderful pastries that use either poppy seeds or poppy seed paste,” he said. “I think poppy seed has a deep history there.”

Since starting their Queens-based company in October 2016, Zohar and Frisch have traveled to Tanzania to visit cinnamon and black peppercorn farms, to Guatemala to find cardamom and chili producers, and to India to source turmeric, among many other countries.

Along the way, they said, they found a commodity that they say was ready for the kind of “supply chain revolutions” that happened to the coffee and chocolate industries. The New York Jewish Week spoke to Zohar and Frisch about how they first learned about the spice industry, what makes for a higher quality spice and why you should find out where your spices come from.

How did you first become interested in spices and the way they’re sourced?

Ethan Frisch: I’m the culinary half of our business and Ori is the business half of our business. My background is half in restaurant kitchens — I worked at a high-end Indian restaurant here in New York City called Tabla under a chef named Floyd Cardoz, a kind of iconic Indian American chef, so I learned a lot about spices. And then I left kitchens to go to grad school to work in international development, got a master’s degree, moved to Afghanistan. I lived there for about two and a half years and was working for a big nonprofit, spending a lot of time in this pretty remote mountainous area of the country in the northeast, a province called Badakhshan, which is famous within Afghanistan for this amazing wild cumin that grows in the mountains. I’d never tasted anything like it so I started bringing it home to share with friends in the restaurant industry and they got really excited about it. And as these things sometimes go, they started to ask if they could buy some, or could they get it into the restaurants. And so I called Ori and said, “There isn’t a business here, right?” And he said, “Maybe there is.”

What are the social issues involved with the spice industry? What do people not know about their spices that they should know?

Frisch: What we realized pretty quickly was that there had been these sort of supply chain revolutions in coffee and tea, in cacao, even in veggies, right? People go to the farmers market, they want to know where their food is coming from, and that had not extended into spices at all. But spices are traded in similar ways to other agricultural commodities — farmers are pushed to grow for volume, not for quality. When an individual farmer is doing something different, like growing an heirloom variety or using regenerative techniques, kind of taking a more holistic approach, it all gets lost, because that special thing that they grew is just getting mixed with everybody else’s. So most people are accustomed to cooking with pretty low-quality, stale spices that have been sitting around forever, [that] have no sense of terroir, no origin, no farmer behind them who created something special.

Ori Zohar: I’d say spices are the food in your pantry that people know the least about — about where it comes from, about what it is. What’s been really cool is we’ve been able to kind of demystify that and go back to origin and create a connection directly from the cinnamon that you’re kind of sprinkling over your oatmeal or floating in your coffee and the farmer that got that cinnamon tree when they were a kid from their parents and watched it grow for 20 years as the bark matured and became more fragrant and more flavorful.

Frisch: That was exactly my experience working in high-end restaurants in New York City, where we would list the name of the farm that grew the lamb, but the spices were totally generic, big brands.

Where do you go to find the producers of these spices?

Frisch: That’s the fun part. We’ve been in the business five years and so we built a really strong network. We now source from 20 different countries and close to 300 farmers. We meet them through NGOs — that’s how we met the farmer in Guatemala. We meet them through the local government offices, that’s how we met our partner star anise farmers in Vietnam, and a few others [through the] ministry of foreign affairs or ministers of agriculture, people [who] know who the best farmers are in a particular region. And then, more and more, we’re meeting farmers online, or they’re finding us on social media. We work with a nutmeg farm in Grenada where the niece, who is in her late 20s, is taking over the business from her aunt and uncle, and found us on Instagram and reached out. We went to visit in July, and now I have four shipments from them.

Do you any of your spices come from Israel or the West Bank? Are there any other spices that you’re thinking about bringing in from that area?

Frisch: We just got a shipment of Palestinian za’atar from Ein Sabiya, right outside of Ramallah. And it’s all Palestinian-grown ingredients — the za’atar herb itself, the sumac, the sesame. But there really is not that much grown in Israel or in the West Bank. We’ve looked at a few other things. There’s some interesting things happening around seaweed and Ori’s father has connected us with some seaweed producers.

Zohar: My dad is a marine biologist, so he works with kelp and seaweed and all that. I’m Israeli, we go back every year, my parents spend a fair amount of time there. So it has been really nice to be able to come back and have some business there, too. We’re always trying to find ways to sneak flavor into people’s foods in better and more interesting ways. And that’s the general story around spices and how people should be cooking with them more often. You know, people often build flavor with salt and fat and sugar, which we love. But there’s a much broader palette to paint with. And we think that seaweed should be part of that palette.

Is there any Jewish history of the spice trade that you’ve thought about or that motivates you?

Frisch: We were just in Hungary in October to meet a paprika farmer who we are starting to work with, and we went to visit the Szeged synagogue. Szeged is a famous Hungarian paprika-producing region. Ori’s family went to that synagogue many, many decades ago. We were both really struck by, in this stained glass [in the] synagogue, there were all of these spice plants — there was ginger, there were peppercorns on the vine, there were fresh cloves. I mean, things that most people wouldn’t even recognize; most people don’t know what fresh cloves look like, and there they are etched into the stained glass. So that was pretty incredible to see that.

Zohar: You know, the spices that you smell after Havdalah, it’s cloves. And so there is this big connection between Judaism and spices and also in the foods that we eat.

Why is cinnamon so iconic in Jewish cooking?

Frisch: I think it’s a connection to the Middle East, a trading hub for spices going all the way back. There were stories that cinnamon sticks were from the the nest of a giant eagle, and you had to lure the eagle away with meat so that you could steal the sticks from the nest. And it was Jewish and Arab traders, going all the way back, who were transporting spices around the world, through ultimately to and through the Mediterranean. So we picked up some some interesting flavors.

Zohar: I also think that it’s worth mentioning that the creator of Old Bay Seasoning was a Jewish immigrant who came to Baltimore, got a job at McCormick, and was fired almost immediately. McCormick, years later, acquired the brand, so I think that’s a really fun connection between Jews and trading and spices. There’s always been a deep connection, historically, in this area, and I’m very happy that the crab seasoning that is so famous was started by a Jew. It feels like, you know, we did it.