Fed up with its tenant, a NYC synagogue seeks to replace board of historic Touro Synagogue 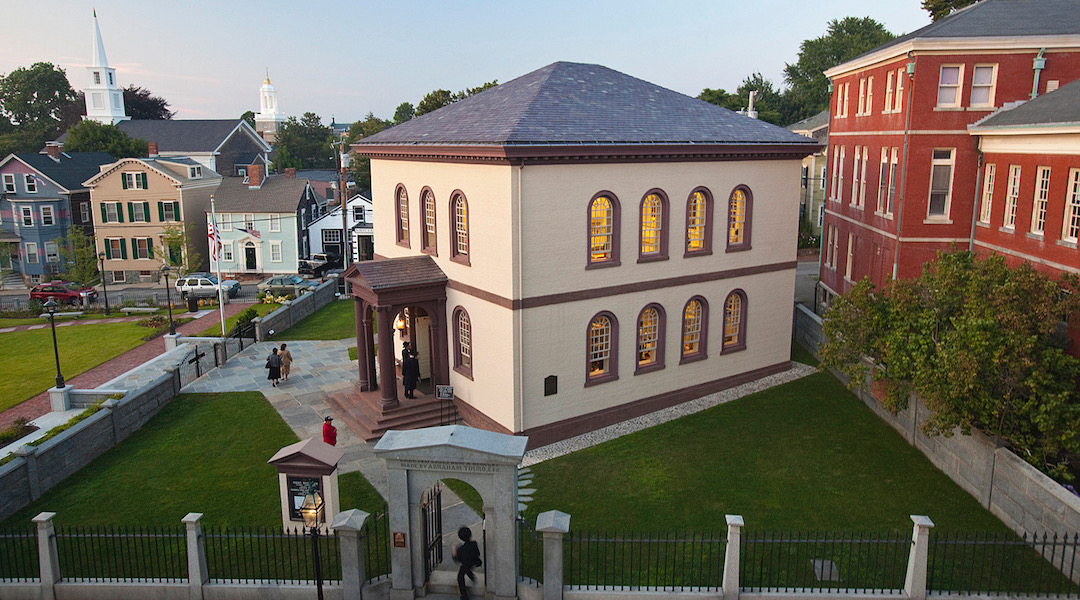 (New York Jewish Week via JTA) – The historic New York City synagogue that controls the equally historic Touro Synagogue in Newport, Rhode Island moved to terminate the lease of the congregation that worships there.

But don’t call it an eviction, leaders of Congregation Shearith Israel in New York say: They describe the filing as an effort to restructure the board of Congregation Jeshuat Israel, which has met at Touro for 120 years, and install a new slate of officers who will “ensure that Touro Synagogue is properly maintained into the future.”

Shearith Israel says the current rabbi and congregants are “encouraged and welcome to remain.”

Tuesday’s filing with the State District Court, Second Division in Rhode Island is the latest twist in a tense and litigious relationship between Shearith Israel, North America’s oldest Jewish congregation, and Jeshuat Israel, which has leased the Touro Synagogue, a national historic site, since the early 20th century.

Founded by Sephardic Jews in the 18th century, Touro is perhaps best known for a visit by then President George Washington and a letter he wrote to the congregation promising Jews religious liberty.

Shearith Israel, also known as The Spanish and Portuguese Synagogue, has had a close relationship with Touro from its beginning, when Touro’s founders included Sephardic grandees who had belonged to Shearith Israel.

The Manhattan synagogue has owned the Touro Synagogue building since 1820s; when the original Sephardic congregation dwindled, Shearith Israel leased the building to Jeshuat Israel, an Ashkenazi congregation that claims 125 member households.

In a highly publicized dispute, the two Orthodox congregations clashed over the past decade when Jeshuat Israel tried to sell a valuable set of Torah decorations from Touro’s inventory. In 2019, the New York synagogue’s ownership of the building and its pricey artifacts was essentially confirmed when the U.S. Supreme Court declined to take up Jeshuat Israel’s claim that it was the rightful steward.

Shearith Israel’s move to reshape Jeshuat Israel’s board seems to have been precipitated by two disputes in the summer of 2021. The New York synagogue’s leaders complained after learning that Jeshuat Israel allowed the erection of a new gravestone at Newport’s historic Jewish cemetery, which Touro operates. The gravestone is reserved for Amb. John Loeb, an investment counselor and philanthropist for whom the synagogue’s visitors center is named. Loeb is still alive.

Shearith Israel leaders said in a press release that the gravestone “would never have been permitted by Shearith Israel without research into some important issues of Jewish law and aesthetics.”

The New York synagogue and Newport congregation also clashed when Jeshuat Israel — known as CJI — claimed they would need to raise between $2 million and $5 million for repairs to the Georgian-style Touro building, according to Louis Solomon, Shearith Israel’s parnas, or president. Shearith Israel said they had been previously told the Touro building was not in need of any significant repairs.

“It is really about transparency. It’s about trust. It’s about decision making. It is not about money,” said Solomon. “They’ve never raised funds for [repairs]. The Touro Synagogue Foundation and Shearith Israel congregants are the ones who have given the big money. CJI doesn’t have to do that.”

In a statement to congregants on Jan. 22, the leadership of the Newport congregation said that the gravestone was installed at the cemetery without the synagogue’s knowledge, and that the congregation apologized to Shearith Israel and “worked closely with Ambassador Loeb’s representatives to have the stone removed until his passing.”

In response to queries from The New York Jewish Week, Teitz sent a two-paragraph statement.

“We are shocked that Shearith Israel seeks to expel Rhode Island’s Congregation Jeshuat Israel from the historic Touro Synagogue, the oldest synagogue in the country and the nation’s cradle of religious liberty. The members of the Jeshuat Israel Congregation have been the faithful stewards of  and peaceable worshippers at Touro Synagogue for more than 140 years,” Teitz wrote.

She added: “At a time of unprecedented attacks on American Jewry, we are devastated that our Congregation has become the target of a shameful power grab by another Jewish congregation that over the years has not provided us or Touro any meaningful  support at all. We condemn this destructive attack on our congregation and displacement of our community, and call upon Shearith Israel to let Jeshuat Israel live and pray in peace.”

Solomon says the 450-member New York synagogue is only asking for what’s best for the future of Touro and what’s in its rights as the owner. The new board, he said, “are going to be people who are willing to talk to us and they’re not going to slam the phone down and not going to hide from us and there’s going to be transparency.”

Under the restructuring, the current services will not change, and the rabbi and current congregation will be allowed to continue services in the building, he said. Solomon said the dispute did not reflect any differences over the Sephardic and Ashkenazi traditions of the two congregations.

As part of the restructuring, Shearith Israel, also known as CSI, said it would claim two seats on a reconstituted board. The other seats, said Solomon, would go to interested philanthropists, current CJI members, local academics and “other passionate stakeholders.”

“I intend to invite several of the current board members,” he told The New York Jewish Week.

The Jeshuat Israel congregation objects to the call for board members from the New York synagogue “without any promise of either a long term lease or that CSI will not make future demands at any point,” according to its letter to congregants. “In other words, granting CSI its demand of two Board seats will not provide any long term stability or comfort with respect to CJI’s future ability to pray at Touro Synagogue.”

Both sides agree that the move to dissolve the current board came after months of attempts at peacemaking; each side blames the other for their breakdown.

The Newport congregation says they agreed to a mediator chosen by Shearith Israel — Frank Williams, a former chief justice of the Rhode Island Supreme Court — who asked for in-person mediation. Jeshuat Israel blamed the New York synagogue for insisting they would only meet via Zoom due to concerns over COVID. Solomon, a litigator, says he has engaged in dozens of legal proceedings over Zoom during the pandemic.

Two other attempts at mediation were unsuccessful.

Ultimately, Jeshuat Israel says their independence has been earned over its years of tenancy at Touro. “We may own the building in trust — but we are a proud congregation with a proud history — and our independence is vital to our future. In other words, no landlord participates in its tenants’ activities on a day-to-day basis like what CSI is asking of CJI,” according to its statement to congregants.

Solomon said the restructuring will allow Shearith Israel to go ahead with plans to expand Touro as a pilgrimage and educational site serving Jews around the country and the world. Shearith Israel’s rabbi, Dr. Meir Y. Soloveichik, he said, has a keen interest in American colonial history. “There’s no reason why Touro should not be an important center of the Jewish historical world in America,” said Solomon.