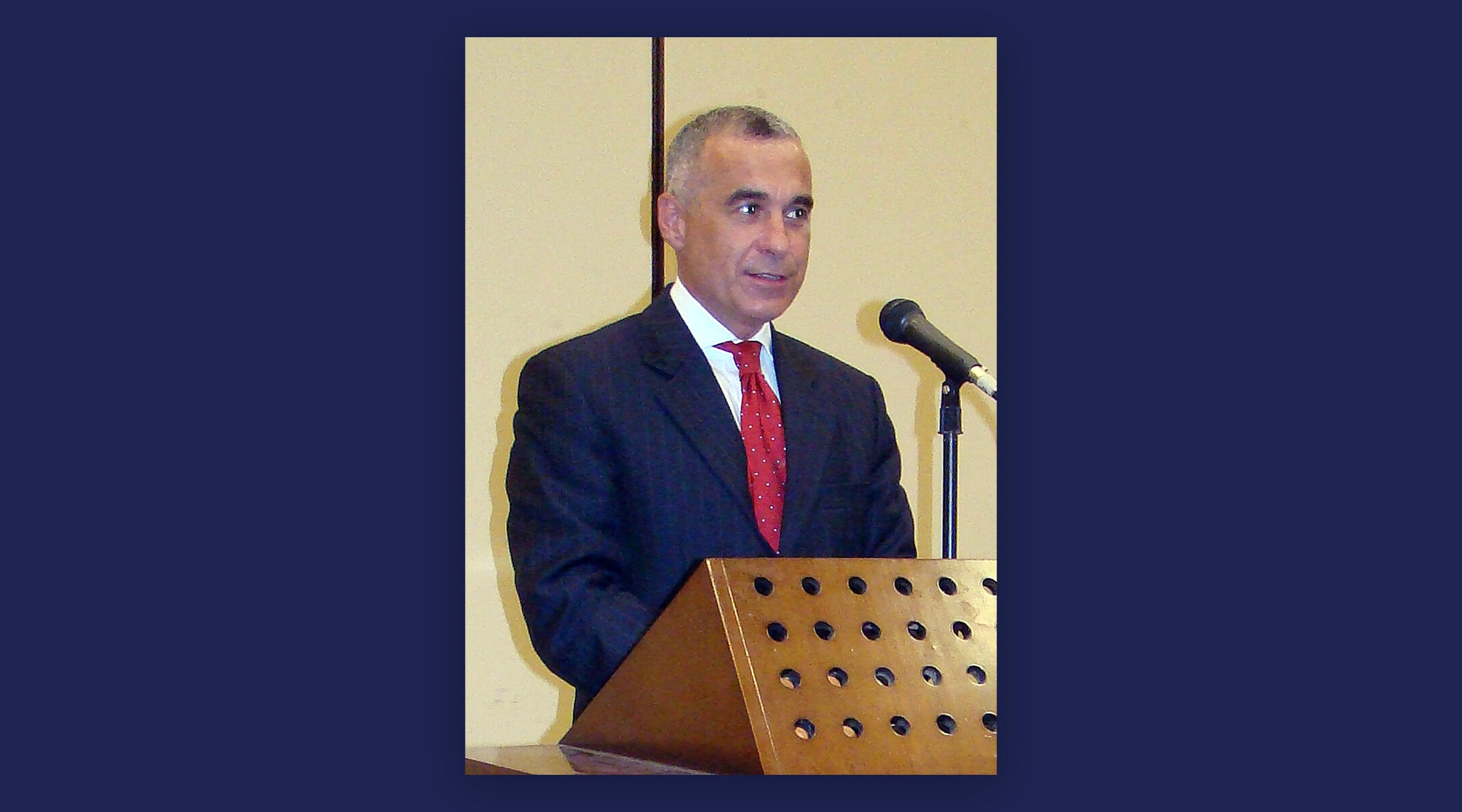 BUCHAREST, Romania (JTA) — A Romanian political hopeful who could become honorary president of the country’s fourth-largest political party praised an antisemitic 1930s fascist leader during a primetime TV interview on Monday night, drawing sharp condemnation from Jewish and other groups.

Speaking on Antena 3 news channel, Calin Georgescu, a sustainability expert formerly affiliated with the United Nations, said Corneliu Zelea Codreanu “fought for the morality of the human being.” An interviewer had asked Georgescu why he put Codreanu on a list of national “heroes” in a 2020 Facebook video which garnered over 700,000 views.

Codreanu led the fiercely antisemitic Legionnaire Movement until his execution in 1938. The group espoused an extreme version of ethnic and religious nationalism that involved political murders and acts of terrorism. Two years after its founder’s death, the movement entered the government of Romania’s pro-Nazi dictator Ion Antonescu. The experiment ended in January 1941, when the Legionnaires rose against Antonescu in a three-day frustrated rebellion, during which more than 120 Jews were killed and several synagogues and Jewish businesses were destroyed. The events are known today as the Bucharest Pogrom.

Georgescu also referred to Antonescu, under whose rule at least 280,000 Jews were killed, as a “martyr.”

The comments have drawn a storm of condemnation from the Jewish community and civil society in Romania, which have been warning for several months of the return of antisemitic discourse to the public sphere.

Speaking to local news website G4Media, Alexandru Florian, director of the Elie Wiesel Institute for the Study of the Holocaust in Romania, Georgescu’s statements as “a mystifcation of history and a clear attempt” of turning “fascists leaders” into heroes.

Georgescu’s 2020 Facebook video has circulated widely in Romania after he was nominated to be honorary president of the far-right AUR party on Jan. 24. In announcing the nomination, AUR’s co-chair George Simion said that the party is also considering supporting Georgescu as its presidential candidate in the 2024 elections.

Simion told the Jewish Telegraphic Agency that Georgescu’s comments “do not represent in any way the position of AUR,” adding that Georgescu “will have to clarify” his remarks. Asked whether he is considering revoking Georgescu’s nomination as AUR’s honorary president, Simion said “It is one of the options.”

The JTA also questioned Simion over the broader AUR party’s views regarding Antonescu and Codreanu.

Simion was presumably referring to the Romanian law passed in 2002 that criminalizes Holocaust denial.

In a recent TV interview, Simion said that his party was planning a meeting with officials from former Israeli Prime Minister Benjamin Netanyahu’s Likud Party for April, and presented that as proof that AUR bears no prejudice against Jews.

According to the Jerusalem Post, Likud’s foreign affairs director and spokesman Eli Hazan has instructed his party’s members to avoid any contact with AUR.

“This party is antisemitic,” Hazan reportedly wrote to the legislators. “It is bad for the State of Israel, bad for Likud, and the Jewish community in Romania is very concerned about this announcement [by Simion].”