‘Never again,’ for the Uyghurs: Jews around the world ramp up China protests as Beijing Olympics start 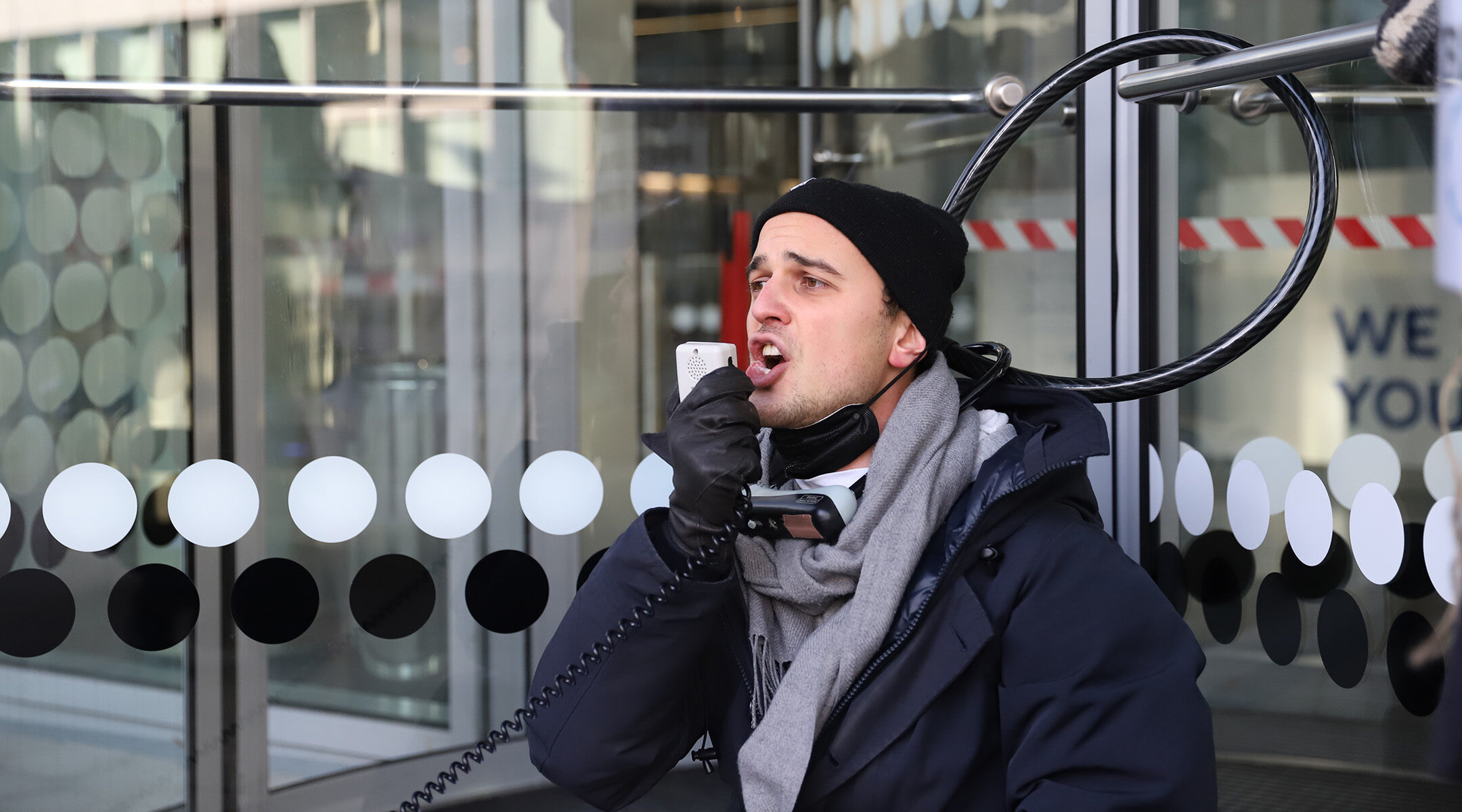 BERLIN (JTA) — On a recent Friday afternoon, with the Beijing Olympic Games only three weeks away, Mischa Ushakov and Padma Wangyal chained themselves to the entrance of the Allianz insurance giant’s headquarters in Germany’s capital.

They had two demands: that Allianz “drop their sponsorship of the games in China and comment on the human rights abuses of the Chinese government,” Ushakov said.

“We gave them a one week deadline,” he added.

Ushakov, 23, is a cofounder with Bini Guttmann of Never Again Right Now, a two-year-old Jewish group dedicated to raising awareness about China’s persecution of its Uyghur Muslim minority. Wangyal is a 73-year-old Tibetan exile; Never Again Right Now had joined forces with the Tibet Initiative Deutschland for the Allianz protest.

Their protest failed to move Allianz. But when the Beijing Winter Olympic Games open on Friday, they and other protesters will be back, this time at the iconic Brandenburg Gate. 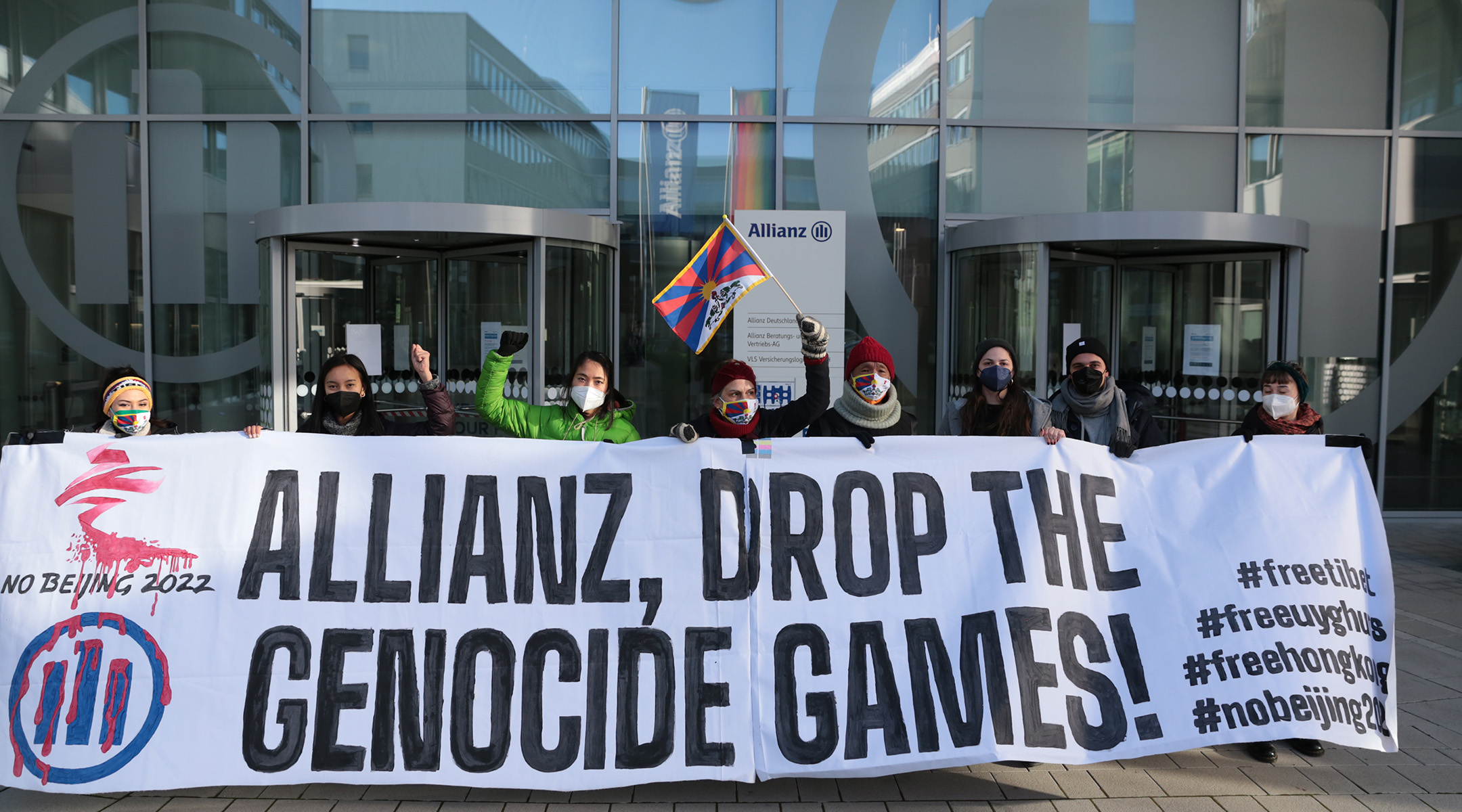 They are also planning a “humanistic” torch relay in 15 German cities to mark the start of the Olympics — which they are calling the “genocide games.”

“As a Jew in Germany you are always seen as a so-called genocide expert,” Ushakov told the Jewish Telegraphic Agency. “When Bini and I started this campaign we hoped that as Jews talking about genocide – and some of us are descendants of Holocaust survivors – we would get more attention. I call it a disintegration of the narrative: People in Germany will always see the victim in me, so if they will, then I will talk about something they don’t want to hear.”

Ushakov’s group is far from alone. In London, Jewish groups will join a demonstration at Piccadilly Circus. In other cities, there will be demonstrations outside Chinese embassies and consulates.

Since 2015, China has cracked down on its Uyghur population — a Turkic Muslim minority with a presence in the country’s western Xinjiang region — placing them in so-called re-education camps, which can be spotted in satellite photos. Reports smuggled out of China and spread in mainstream media tell of police and military brutality, sexual crimes and forced sterilizations. Members of the Uyghur diaspora have been cut off from their families in China for years, even decades, and some reportedly have been pressed to spy for China, under threat of harm being done to their relatives.

The Pentagon reported in 2019 that at least one million people out of a total population of some 10 million Uyghurs had been rounded up and put through the camps since 2015.

The United States, Britain, Canada and Australia are holding a diplomatic boycott of the games. While Israel has remained largely silent, ostensibly due to warm relations with China, prominent Jews elsewhere have raised their voices: British Chief Rabbi Ephraim Mirvis last year joined a British Jewish protest campaign, calling on the public to “taint the [Olympic] brand… in protest against the unspeakable atrocities that are being committed today against the Uyghur Muslims.” European Parliament Member Raphaël Glucksmann of France, who is Jewish, launched a campaign to boycott international retailers linked to Uyghur forced labor.

The U.S. Holocaust Memorial Museum has published information about the persecution on its website and major U.S. Jewish organizations like the American Jewish Committee and the Anti-Defamation League have spoken out on the issue.

“People being persecuted for things like wearing beards or prayer shawls, these are things that the Jewish community knows too well,” said Serena Oberstein, 42, executive director of Jewish World Watch, a California-based organization established to raise awareness about genocide. Last fall they held a protest outside a Chinese consulate on the anniversary of the 1938 Kristallnacht pogrom against Jews in Germany.

“This is not the Holocaust: There is no perfect comparison,” Oberstein said. “But for me personally, the stories we are hearing coming out of the region are too familiar to the stories I heard growing up from my grandfather” – a soldier who helped liberate the Dachau concentration camp in Germany.

Oberstein helped form an interfaith “Berlin-Beijing Coalition,” which draws a parallel between the Olympic games in China today and the ones held in Nazi Germany in 1936.

“The Nazi party used the Berlin games to strengthen its reputation in the world. Two years later came Kristallnacht. [Today,] we know what authoritarian regimes that systemically persecute people do, when they build concentration camps and ghettos and forced labor camps,” she said. 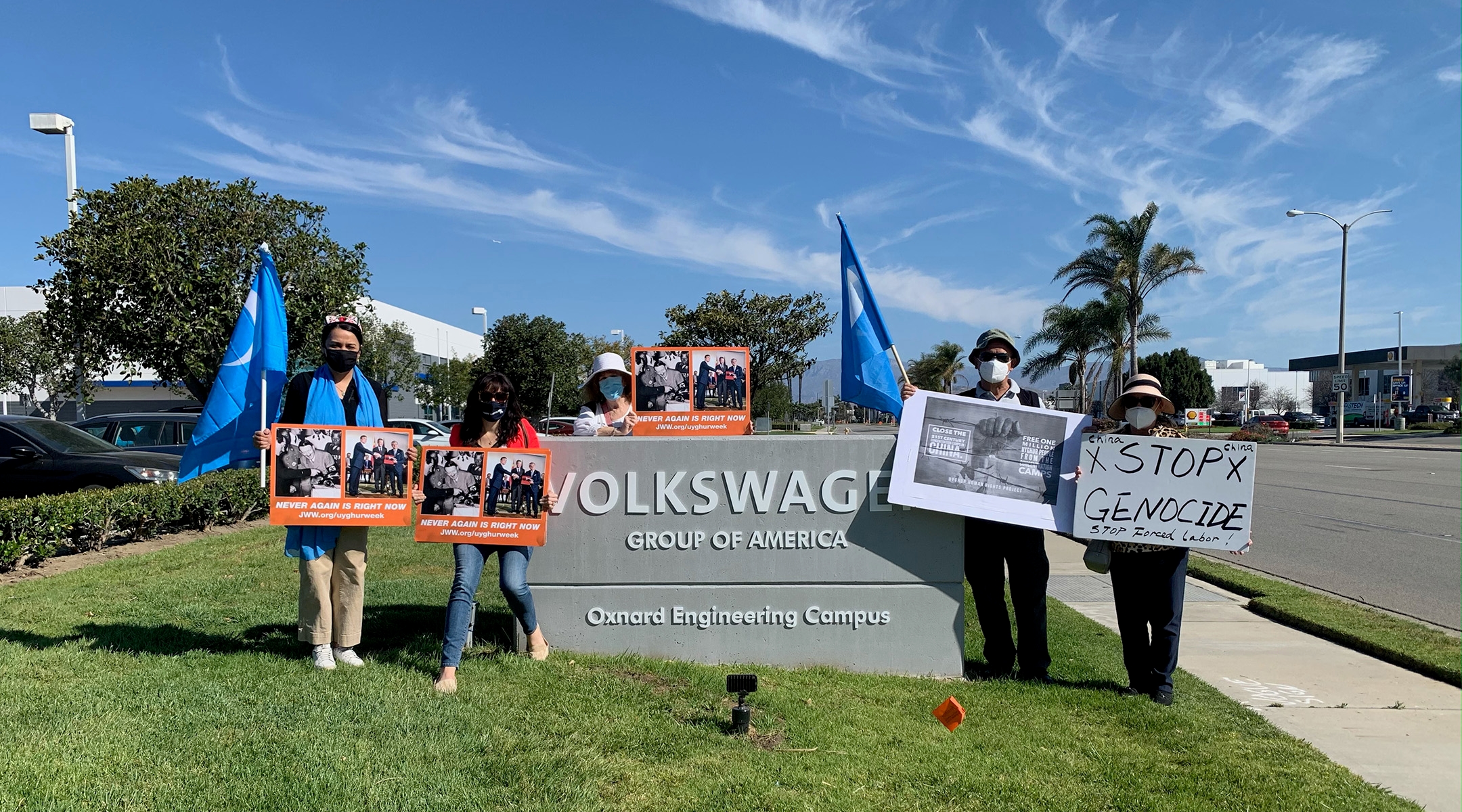 The level of Jewish protest has ramped up as the Games have drawn closer. Last week, the Elie Wiesel Foundation for Humanity took out a full page ad in The New York times, signed by the French Jewish philosopher Bernard-Henri Levy, the former Soviet refusenik Natan Sharansky and Wiesel’s son Elisha, urging athletes and corporate sponsors to “walk away from these games unless Beijing takes steps to reunite Uyghur families. And we urge the world’s citizens to embrace the cause of this persecuted population.”

Of all the groups taking up this issue, none have been more active than Jewish ones, said Washington, D.C.-based attorney Nury Turkel, chair and cofounder of the Uyghur Human Rights Project. Second to the Jews in the United States are the Southern Baptists, he said.

“‘Never again’ is relatable to what the Uyghurs are going through,” said Turkel, 50, who was born during the Cultural Revolution in a Chinese reeducation camp for Uyghurs and came to the United States in 1997. “It looks like [Chinese leader] Xi Jinping is using Hitler’s playbook: targeting the social elites, the intellectuals, religious leaders, going after women and children, using slave labor, and using the fanfare around global events to normalize their behavior. When the Berlin Olympics took place, Hitler had already built [the concentration camp] Dachau.”

“I talk to my Jewish friends and supporters and have been deeply touched listening to their passionate remarks,” added Turkel, who has been invited to brief members of the AJC and other Jewish organizations. “They told me, ‘We cannot tolerate that this happens.’”

The call to action is urgent, says Mia Hasenson-Gross, executive director of the London-based Jewish charity René Cassin, which has been a major force galvanizing Jewish activism in the United Kingdom on the Uyghur issue. The organization is named for the French-Jewish co-author of the Universal Declaration of Human Rights and Nobel Peace Prize recipient René Samuel Cassin (1887-1976).

“Uyghur women are forcibly sterilized; children are forced to denounce their language and culture tradition, they are under surveillance,” Hasenson-Gross said. “If we stop the Chinese government now from its acts of preventing births, from acts of future destruction, then we have a chance at preventing the genocide of the Uyghur people.”

There are also lone Jews standing up, like Andrew, a 50-something Orthodox Jewish businessman in London who did not reveal his full name over privacy concerns. Twice weekly for the last year and half, he has been protesting outside a Volkswagen showroom on a busy street in Southgate, asking the German company to leave the Uyghur area, where it has a factory. He and a friend named Daniel even recently stood quietly with signs outside a Holocaust Remembrance ceremony at Middlesex University, with the approval of Andrew’s mother-in-law, a Holocaust survivor.

“I am the victim of anti-Muslim hatred for holding up a sign that says ‘3 million Muslims in Chinese concentration camps and in slave labor,’ and I get quite a bit of antisemitic abuse,” he said. “I am trying to save women’s and children’s lives, and they shout at me, ‘Free Palestine.’ That is pure antisemitism.

“About three weeks ago, someone drove past and said, ‘Do yourself a favor and get a job.’ Well, I have a job, and I think spending an hour or two twice a week is worthwhile to save those lives if we can,” he added.

For athletes, protest has its own challenges. First of all, Olympic athletes have no say in where Olympic games will be held, says former Olympic skier Noah Hoffmann, who is Jewish. He recently co-founded Global Athlete, which aims to correct what he describes as an imbalance of power between sports administration and athletes.

“The power that the International Olympic Committee wields is immense,” said Hoffmann, 32, who is finishing an undergraduate degree at Brown University in Providence, Rhode Island, after moving on from his sports career. 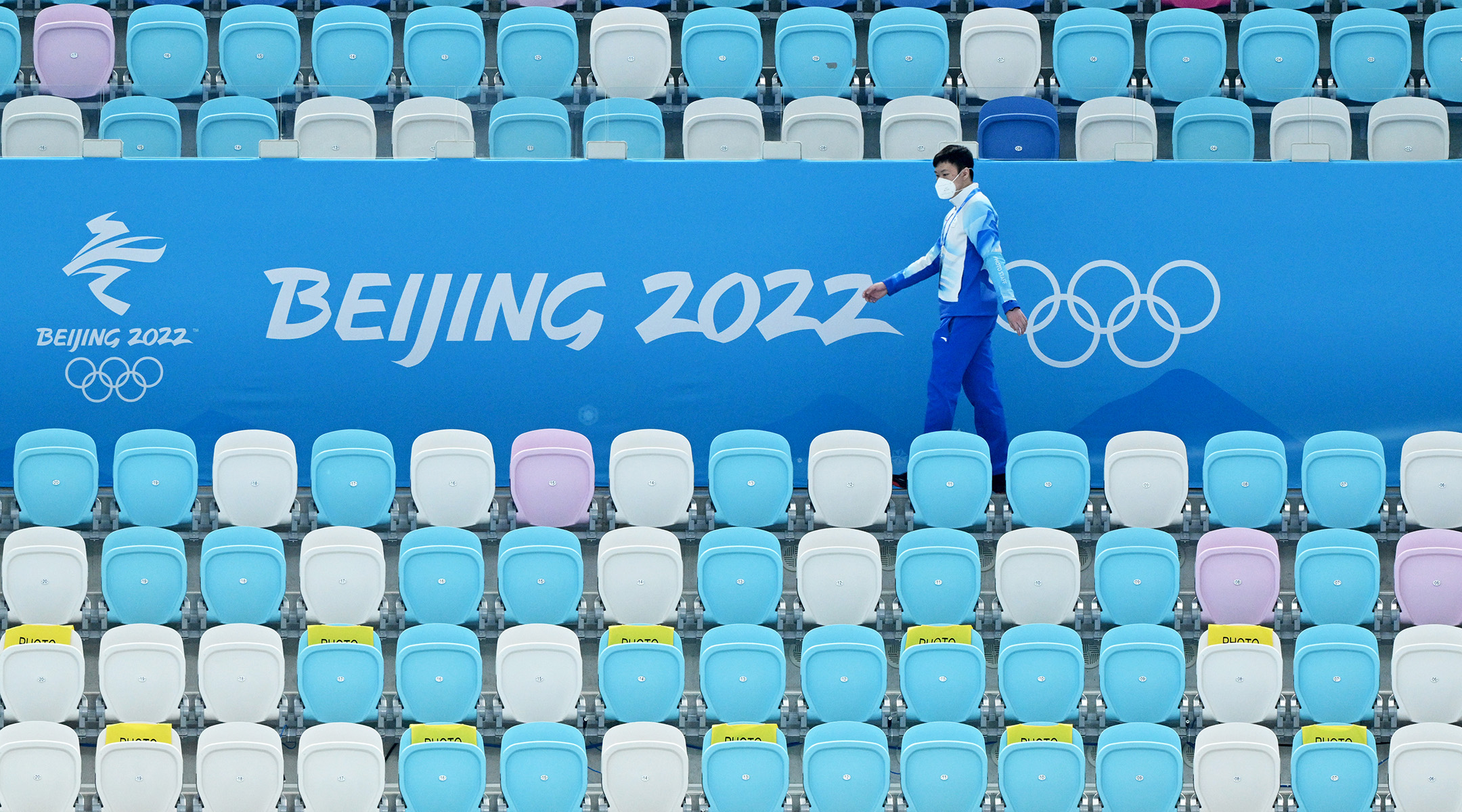 The other challenge is the danger of speaking up in China. “I believe in the power of athletes to be forces of good… so I hate telling them to stay silent in China, but the risks are just too high there,” he said, noting the recent disappearance of Chinese tennis star Peng Shuai after she accused a retired Chinese Communist Party official of sexual assault.

“The Women’s Tennis Association canceled all 2022 tournaments in China, they walked away,” he said.

The IOC did not follow suit. According to a Jan. 5 report in The New York Times, the IOC has been reluctant to comment on human rights abuses in China.

“The use of sport to distract from genocide is not new,” added Hoffmann, whose great-grandmother left Holland before the Holocaust.

The IOC “has never been held to account for its strange affinity with totalitarian regimes around the world,” said Turkel, who urges the public to denounce corporate sponsors and refuse to watch the games.

Back in Berlin, Ushakov said he and Wangyal unchained themselves from the Allianz doors last month after a security official told them their concerns would be discussed at company headquarters in Munich. But “that information is not accurate,” Allianz spokeswoman Anja Rechenberg told JTA in a phone call later that day. “The initiative has been in contact with us for many months, and their demands are known.”

Their demonstration in Berlin “doesn’t change anything,” Rechenberg said. “For us, this is a long-term commitment. Allianz is a strong supporter of sport, and in this framework we have an eight-year commitment to the Olympic Games.”

Allianz is one of many German firms that have uncovered and publicized their Nazi past. But the company hasn’t learned the right lessons, said Berliner Tenzin Yangzom, 30, executive director of the Tibet Initiative Deutschland, who contacted Never Again Right Now for help with its Allianz protest. “It is very important to have the voices of the Jewish campaign.”

“This world was given the promise of ‘Never Again,’ and that means on one hand combating all forms of antisemitism and standing with Jews — of course,” the Never Again Right Now co-founder Guttmann said in a call from Vienna. “But the promise also meant preventing genocide and mass atrocities around the world. The world has failed in that mission again and again.”