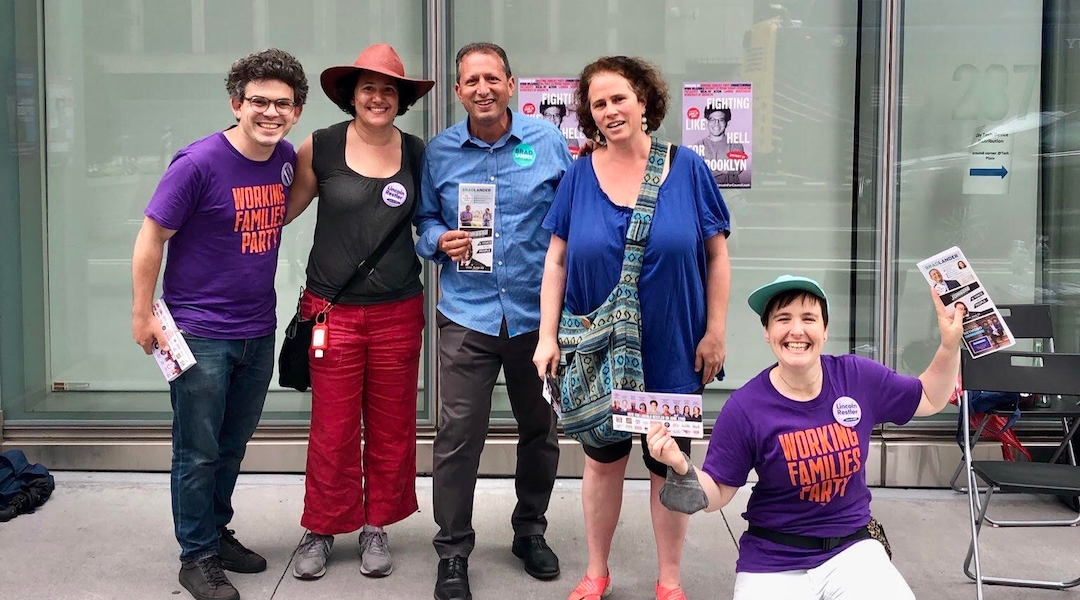 (New York Jewish Week via JTA) — In the same week that he rallied against a natural gas company’s expansion plans, Lincoln Restler repeatedly condemned a series of antisemitic incidents in Brooklyn.

Such positions may be par for the course for a member of the New York City Council, but they also reflect Restler’s unusual ability, as a newly elected member of the council, to build coalitions within both progressive groups and the large Orthodox community in his Brooklyn district.

Restler won the November election with a sweeping 63% of the ranked-choice vote in District 33, which encompasses the haredi Jewish stronghold of Williamsburg along with Greenpoint, Dumbo, Brooklyn Heights and parts of downtown Brooklyn.

Since then, Restler, 37, has been busy. Last week, he helped restore water to over 500 families at Gowanus Houses, a public housing complex, and rallied against upgrades at National Grid’s Greenpoint Energy Center that he and other politicians said would expand fossil fuel infrastructure and contribute to climate change.

On Monday, he and other members of the council’s Jewish Caucus issued a statement condemning what they called a “rise in anti-Jewish attacks in our city.” On Feb. 4, a man wearing Hasidic garb was sucker-punched as he was walking in the Bedford-Stuyvesant neighborhood. Over the weekend, vandals spray-painted antisemitic graffiti on school buses belonging to a local yeshiva. Both incidents happened in or around Williamsburg.

Progressive values and Jewish identification come naturally to Restler. He was previously elected as district leader and worked as a community activist. As a young child he participated in acts of service at the Reform Brooklyn Heights Synagogue with his parents.

“That commitment in the Jewish faith to look out for those in need has informed my values and my commitment to public service,” Restler told The New York Jewish Week. “It is one of the threads that stretches across the Jewish community, left, right and center.”

During his campaign, Restler received the endorsement of Assemblymember Simcha Eichenstein, who represents Borough Park, and several Satmar Hasidic leaders in the Brooklyn Orthodox Jewish Community.

Rabbi Moishe Indig, a leader in the Satmar community, said that Restler is already a fixture in Brooklyn, with years of public service on his record.

“He’s not like other politicians,” Indig said. “He’s always on the streets. If it’s snow, or a blackout or a flood, whatever it is, he is there to help.”

Indig said that it wasn’t Restler’s Judaism that gained him the Satmar endorsement, but his track record throughout all of Brooklyn.

“We have all kinds of different communities and people in Brooklyn,” Indig said. “He knows how to balance all of that.”

In the same campaign, Restler was endorsed by The Jewish Vote, the political wing of Jews for Racial & Economic Justice, a progressive Jewish organization in New York City.

JFREJ Political Director Rachel McCullough said Restler’s ability to listen and engage with the community was an important factor in receiving support from both progressives and the Orthodox community.

“We noticed right away that he had clearly built the right set of relationships with the right set of leaders across the Jewish community,” McCullough said. “He made it clear that he was running to represent the whole district.”

McCullough added that Restler’s election to City Council demonstrates that progressive politics are alive and well in the city. Many progressives were disappointed when the centrist Eric Adams, the Brooklyn Borough president and former New York city cop, was elected mayor in November. (The Jewish Vote endorsed Maya Wiley, a progressive candidate.) 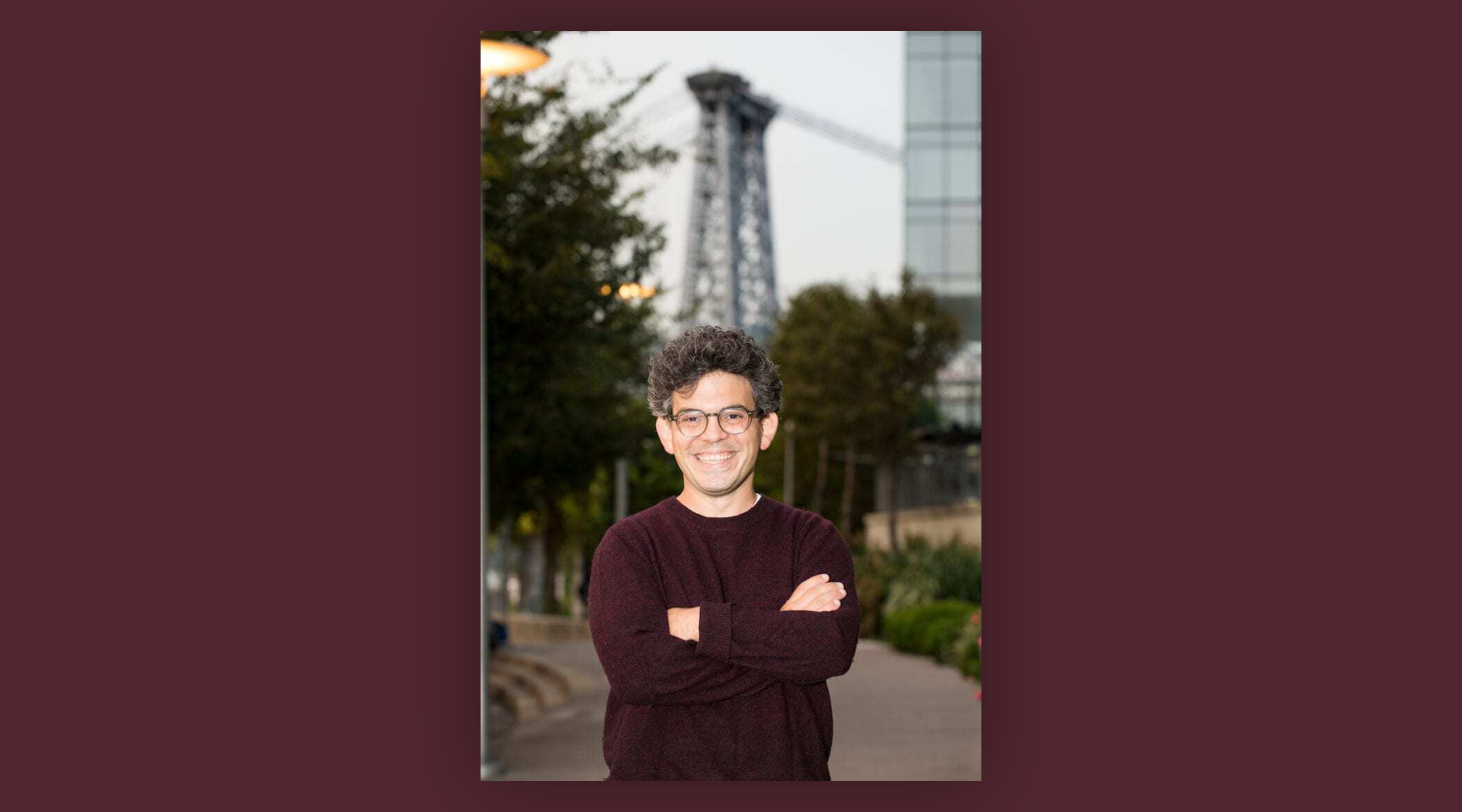 Restler won the November 2021 election for New York City Council with a sweeping 63% of the vote in Brooklyn’s District 33. (Courtesy)

“There’s a really important role for Jewish left politics to be played in New York, the home of the largest Jewish community outside of Israel,” she said. “Lincoln really embodies that, and I think he’s going to make the entire community proud.”

Restler said that one of the most important parts of the job is being a bridge-builder between different groups of people and helping them to find common ground.

“I hope to be a councilmember who has enough credibility in different camps that, even when there’s disagreement, we can give one another the benefit of the doubt and work together toward a compromise,” he said.

While Orthodox and progressive groups have different opinions on many issues — such as policing and Israel — both sides are in agreement about stopping antisemitic and other hate crimes.

“This is in the front of my mind,” Restler said. “I am focused on bringing together all groups in the Jewish community to engage with people of other backgrounds and build tolerance to root out this violence.”

Restler added Orthodox Jews, in their recognizable dress, are disproportionately the targets of antisemitic attacks.

“When I’m walking down the street, I don’t feel at risk of antisemitic violence because people don’t even know that I’m Jewish,” he said. “If you’re wearing a kippah and traditional garb, it sends a very different message.”

Where progressives and the city’s Orthodox Jews may disagree is on tactics in fighting antisemitism. In January, when the Jewish mainstream was calling for increased law enforcement and beefed-up security, JFREJ led a canvassing effort in Williamsburg in response to a series of antisemitic attacks, hoping to defuse tension between diverse local groups.

“We recognized that policing alone is not an effective approach to preventing hate violence,” McCullough said.  “We think that Lincoln is committed to investing in community-based, restorative approaches to hate violence.”

Restler took part in the canvassing and, speaking to a New York Jewish Week reporter at the time, said he sought to balance calls for increased police presence to respond to and prevent attacks with community-based responses like JFREJ’s.

Affordable housing was another issue at the forefront of Restler’s campaign. He said that Jews and gentiles alike are being forced out of the district due to steep increases on rent.

“We need to strike a much better bargain with developers to ensure that when new constructions are going up in our communities, we’re getting the affordable housing we need,” Restler said.

He also noted the lack of high-quality affordable childcare and wants to expand vouchers, not just in the Jewish community, but in the whole district.

“It’s another month’s rent for many working families to afford childcare in our city,” he said. “Expanding affordable childcare options in Williamsburg and districtwide is a pressing priority.”

Indig said it was important that Restler recognized housing and childcare because many families in his community are in need.

“We have large families,” Indig said. “They need to be able to feed their kids. We just need a lot of help with their day-to-day needs.”

McCullough attributed Restler’s success to a cultural competency that can only come from being a Jewish kid from Brooklyn. According to Restler’s bio, he “grew up in a tight-knit community on Pierrepont Street in Brooklyn Heights in the ’80s and ’90s,” and today lives in Greenpoint. After college at Brown University, he worked for as a financial program officer in New York City’s Department of Consumer Affairs.

Restler shared an anecdote about his grandparents, whom he said were founding members of Judaism’s Reconstructionist movement. His family still uses their haggadah during Passover, which dates back to the 1930s.

“In that Haggadah, the experience of Jews escaping [Egypt] is explicitly compared to the challenges of African Americans in the United States,” Restler said.

“That commitment to social justice informs the history of my family over generations, and is the part of my Jewish faith that I’m most proud of,” he added.