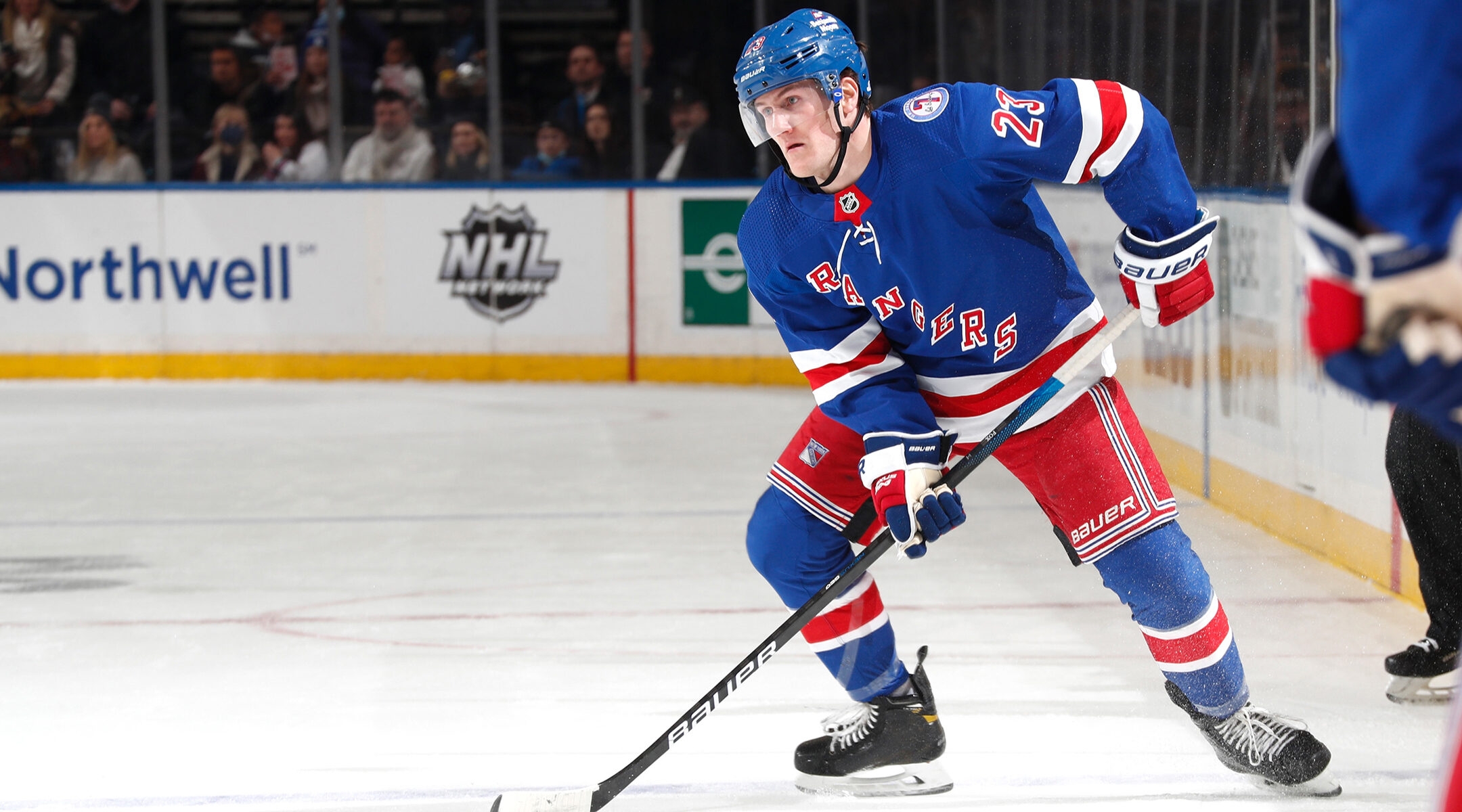 (JTA) — The way Adam Fox describes it, he was brought up like any other not-very-religious Jewish kid on Long Island.

“I’m from a pretty normal family,” he explained to the Jewish Telegraphic Agency. “[I have] two Jewish parents and I went to temple like a normal kid, got bar mitzvahed and, you know, nothing too crazy. I had a pretty normal upbringing.”

But his career since then has been anything but normal for that kind of Jewish kid: Fox, 24, has become a star in the NHL, his play earning him the James Norris Memorial Trophy for the league’s best defenseman last year, and a 7-year, $66.5 million contract — the largest in NHL history for a defenseman leaving his entry-level contract. He was selected for his first All-Star game earlier this year (but didn’t play because of an injury).

He’s also a hometown favorite, playing for the New York Rangers team he grew up rooting for. Even two years after making his NHL debut in October 2019, the magic of playing for the Rangers is not lost on Fox.

“My dad and mom and brother come to pretty much every home game,” he said. “To be able to have them watch me live out a dream of playing for the Rangers… it’s pretty special.” Originally from Jericho, New York, Fox grew up in Long Island’s Jewish community. With his parents, Tammy and Bruce, and brother Andrew, he attended synagogue at the nearby Jericho Jewish Center, a Conservative synagogue, where he was bar mitzvahed. (Yes, it was hockey-themed.)

“There are a lot Jewish residents on Long Island, so it’s cool for me to represent that community,” Fox said. “And, you know, there’s not many Jewish athletes. So to be one of the few and have people who come from where I come from look up to me… I think it’s definitely pretty special.”

He grew up watching and attending Rangers games with his dad and grandfather and started playing hockey for the Long Island Gulls of the Atlantic Youth Hockey League. In high school, his passion for the sport took him to Plymouth, Michigan, home of the USA Hockey National Team Development Program.

Fox played two seasons with the NTDP in Michigan, where he broke the program’s record at the time for most assists in a single season (59 in 2015-2016) and ranked third for career assists (86). Naturally, scouts took notice, and Fox was selected 66th overall in the 2016 NHL draft by the Calgary Flames.

But before playing professionally, Fox decided to attend Harvard University, where he majored in psychology. He also immediately made an impact for the Harvard men’s hockey team, leading all NCAA defensemen in points per game in his first season and was named the Eastern College Athletic Conference/Ivy League Rookie of the Year. While in school he also represented the United States at two International Ice Hockey Federation World Junior Championship Tournaments, winning gold with the team in 2017 and bronze in 2018. In his third season with the Crimson, Fox was a finalist for the Hobey Baker Award for the top NCAA men’s hockey player.

Fox didn’t stick around for his senior season at Harvard, instead choosing to go pro — but he finished his degree through online classes last summer.

After failing to come to contract terms with Fox, Calgary traded his NHL playing rights to the Carolina Hurricanes in June 2018. Just under a year later the Hurricanes ran into the same issue and ultimately traded Fox’s rights to the New York Rangers. Soon after he signed a maximum entry-level salary with his hometown team.

By the end of his rookie season, Fox had 42 points — 8 goals and 34 assists — in 70 games. Whizzing past any “sophomore slump,” Fox improved during the 2020-2021 pandemic-shortened season of 56 games, leading all NHL defensemen with 42 assists and coming in second for his position in points with 47 — securing himself the Norris Trophy.

He’s in the Norris conversation again this year, with a whopping 47 points in 45 games. His Rangers sit at third in their division with a 31-13 record, putting them solidly in play-off contention.

“The past few years have been a bit of a rebuilding period and [a period of] developing younger players. Being able to make that jump this year into a team that wants to contend is getting everyone pretty excited,” he said.

Through it all, he knows he is representing Jews on a stage they do not usually star on. While Jewish athletes have historically done well in other sports like baseball, the National Hockey League hasn’t had a lot of Jewish players over the years — let alone stars.

“If a young Jewish kid sees me play in the NHL, and maybe it prompts him to get into hockey… I think things like that, and seeing different types of people play the sport, are important,” he said. “It’s nice for me to be at this place where people can see me and see Jewish athletes at a high level. So hopefully that breaks some sort of [stereotype] that might be out there.”

It’s not just representation in any sport, either — the stereotypes say that Jews shouldn’t excel in a game that is known for fighting and aggression.

But those tropes don’t hold water for Fox.

“You know, I’d say where I come from I’ve seen a lot of pretty athletic Jewish kids,” he said.