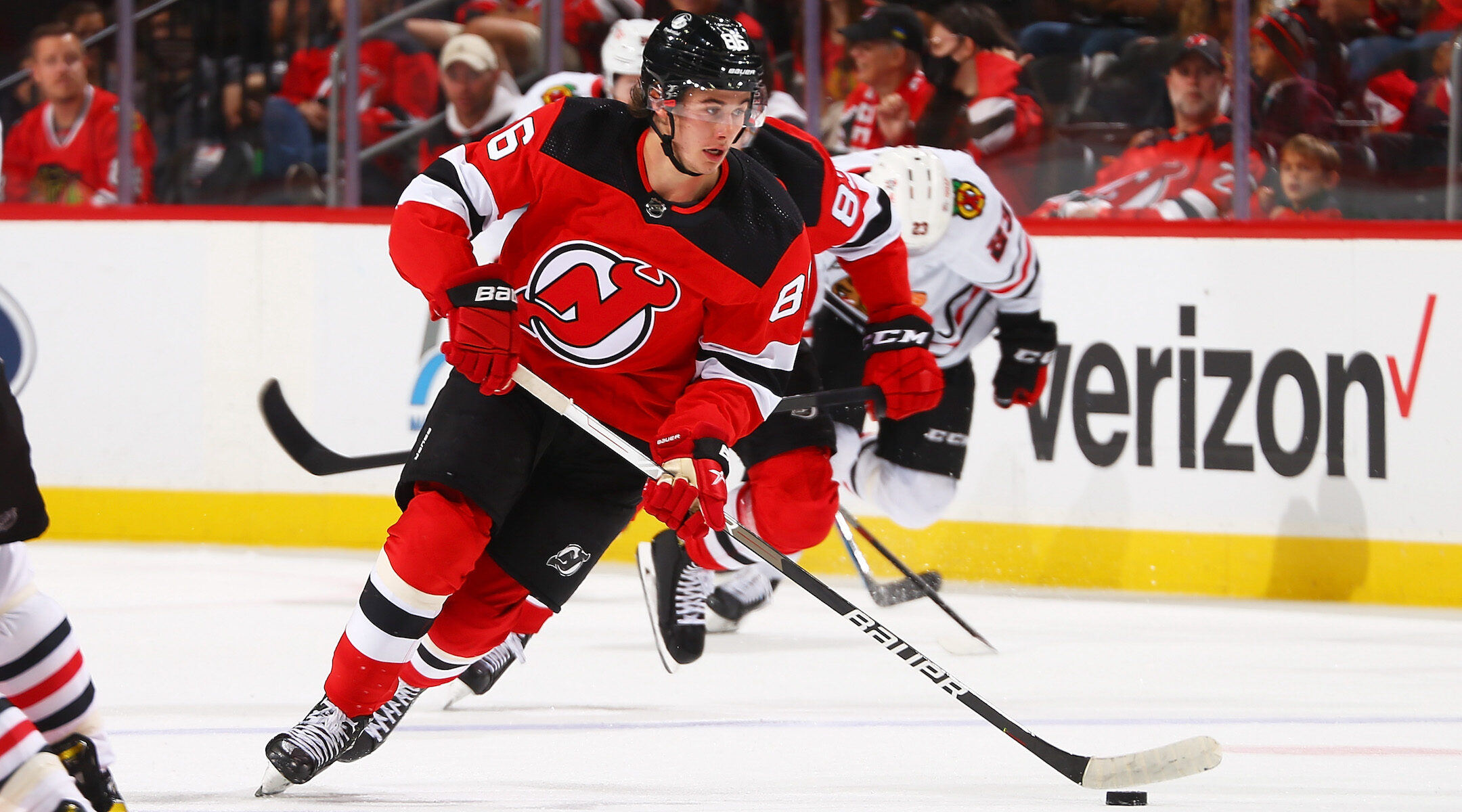 Jack Hughes in action for the New Jersey Devils at the Prudential Center in Newark, N.J., Oct. 15, 2021. (Mike Stobe/NHLI via Getty Images)
Advertisement

(JTA) — The 2021-2022 NHL season is underway, and there are some pretty exciting updates for hockey fans.

There’s the new team the Seattle Kraken (yes, named after the huge sea monster from Scandinavian folklore), and the fact that NHL stars will return to the Olympics in Beijing in 2022 — the first time they will be allowed to compete at the games since 2014, thanks to a new collective bargaining agreement.

But this year the NHL also boasts a historically good crop of Jewish players to root for.

If you love reading about Jews in sports, you won't want to miss our new weekly newsletter.

One week into the season, here’s a review of the Jewish players to look out for and their highlights on the ice so far.

Hyman is one of the league’s best, and most underrated, wingers.

He can “play up and down the lineup, doesn’t take a shift off, can kill penalties and adds some scoring touch,” ESPN wrote during his recent free agency.

In one of the offseason’s biggest storylines, the 29-year-old, who had played 6 years with the Toronto Maple Leafs, signed a 7-year, $38.5 million contract with the Edmonton Oilers.

Eagle-eyed fans will also notice another change for Hyman this year: the number on the back of his jersey. In Toronto, he was #11, now he sports #18. The change was prompted by the fact that #11 is retired in Edmonton, in tribute to former Oilers captain Mark Messier. But as he pointed out in an interview with The Athletic, the number’s Jewish meaning also holds significance for him.

Hyman comes from a Jewish family in Toronto, and attended school at the Community Hebrew Academy of Toronto. In 2013, he represented Canada at the Maccabiah Games in Israel, where he won a gold medal.

Edmonton’s move to sign him already seems to be paying off. He scored in their first game of the season, a go-ahead goal during a power play during the second period. Edmonton went on to win that game 3-2 in a shootout.

When Hyman is away from the rink, he’s also a best-selling and award-winning children’s author. With Penguin Random House he has written the books “Hockey Hero,” “The Bambino and Me” and “The Magician’s Secret.”

Hughes made history in 2019 when he became the first Jewish player picked No. 1 in an NHL draft. The then-teenage prospect was born in Orlando, Florida to a Jewish mother and Catholic father. Though his upbringing was mostly secular, his family celebrated Passover and he had a bar mitzvah.

While his rookie season last year with the New Jersey Devils was average, considering the expectations, Hughes is already looking sharper this season.

In the Devils’ season opener against the Chicago Blackhawks, Hughes, still only 20, first proved himself a difference-maker on the ice in the second period, silkily skating through multiple defenders and scoring right in front of goal.

His most notable goal of the night, however, was a game-winner in overtime. Showing patience beyond his age, Hughes deked out Blackhawks goalie Kevin Lankinen to get the puck at the back of the net.

The win would not have been complete without his smooth celebration, during which he tossed his game-winning stick over the glass and into the crowd.

Unfortunately, Hughes’ fantastic first game was sullied by his second, where he took a hit that caused a dislocated shoulder. His coach is optimistic that he won’t be out of action for long.

Jack Hughes is far from the only talented hockey player in his family.

His older brother Quinn, just 21, became one of the highest paid defenders in the league this month after re-signing with the Vancouver Canucks to a 6-year, $47.1 million contract. (Their younger brother Luke was also drafted last year.)

Quinn had a spectacular rookie season in 2019-2020, making the 2020 NHL All-Star Game and finishing second for the Calder Trophy for Rookie of the Year. While he had an average showing during 2020-2021, his impact in the first few games of this season shows a lot of promise and his new contract symbolizes the confidence that Canucks management has in him.

Though the Canucks’ season is off to a tenuous start with a 1-2 record, Hughes got his first goal of the season in the third period of the season opener, sneaking the puck past Oilers’ goalie Mike Smith from an incredibly difficult angle. (And yes, it was an answer to Zach Hyman’s goal earlier in the game.)

Fox made some Jewish history of his own last year, becoming the first Jewish player to win a major NHL award when he was given the Norris Trophy for best defenseman in the league.

The 23-year-old is most highly skilled in his ability to handle the puck and generate chances for his team, whether that’s fearlessly taking long shots on goal or finding his teammates down the ice.

Fox comes from a Jewish family from Long Island, New York, and has said he is proud to represent the Jewish community in the NHL.

Now he plays in New York for the Rangers and is currently showing that his trophy was no fluke.

Despite the Rangers’ home opener loss to the Dallas Stars on Oct. 14, Fox put on a clinic on both ends of the ice. He put his team on the board in the second period, sniping a goal from distance. And when he wasn’t helping to jumpstart New York’s offense, Fox showed off his clear hockey smarts and skill — he spent a team-high 25 minutes on the ice, and in the next two games played approximately 27 minutes and 28 minutes, respectively.

The defenseman is coming up on the end of his contract, and if his success holds, Fox will most likely be looking at a big extension with the Rangers after this year.

Zucker is a veteran winger who has played most of the past two seasons with the Pittsburgh Penguins, before several with the Minnesota Wild. Born to a Jewish family from Las Vegas, he has a tattoo in Hebrew on his left arm in honor of his heritage; in English it translates to “In pursuit of perfection.”

Though he never had a bar mitzvah, due to the fact that he didn’t want to miss out on playing hockey to study, he still engages in Jewish traditions and holidays like Hanukkah. “I would do virtual menorah lighting with my family back while I was out of town playing juniors or college,” he explained to NHL.com.

In his own words, Zucker had an “awful” season last year. Since being traded to Pittsburgh in 2020, he has struggled to develop offensive chemistry with his new teammates. Not helping matters, in his first full season with the Penguins in 2021 he missed all of March with an injury. It would be inaccurate to say he never really bounced back, because to be quite frank, he never had his footing with the Penguins to begin with.

That said, Zucker is hoping to turn things around for 2021-2022 and so far there are promising signs. By the time Zucker made it 5-1 with a goal at the end of the second period in the Pen’s home opener last week, it seemed inevitable that Pittsburgh would win. But that doesn’t make his goal, a cute shot over his left shoulder as he skated just above the blue paint, any less sweet. And, just the game before, he came through with an assist on a goal by Evan Rodrigues.

Though he is not currently playing in the NHL, we would be remiss not to mention Josh Ho-Sang, who recently had an impressive debut with the Toronto Marlies, a Canadian professional hockey team and the top affiliate of the Toronto Maple Leafs. After all, Toronto Sun writer Steve Simmons predicted in 2014 that Ho-Sang would “be better than all” previous Jewish players in the NHL.

Ho-Sang, a 25-year-old Toronto native, is Jamaican and Chinese on his father’s side and Russian-Jewish and Swedish on his mother’s side.

“I’ve grown up Jewish as my mother (Ericka) is Jewish,” Josh once said in an interview. “I have always celebrated the Jewish holidays like Chanukah and the High Holidays with family and friends.”

Ho-Sang scored twice in his first game on Oct. 16, helping the Marlies beat the Manitoba Moose 2-1. If all goes well this season, Ho-Sang could get the opportunity to be promoted back into the NHL with the Leafs; he had previously signed with the New York Islanders and played with them 2016-2018 and for part of the 2018-2019 season before being demoted to various development and affiliate team from 2019 until this year.

Though they’ve been less productive in the beginning of this season, other Jewish players to look out for in the NHL include: Mark Friedman, a defenseman for the Pittsburgh Penguins; Luke Kunin, a center for the Nashville Predators; Jakob Chychrun, a defenseman and alternate captain for the Arizona Coyotes; and Nate Thompson, a center for the Philadelphia Flyers. Thus far, Kunin has one assist in two games and Friedman has one assist in three games.