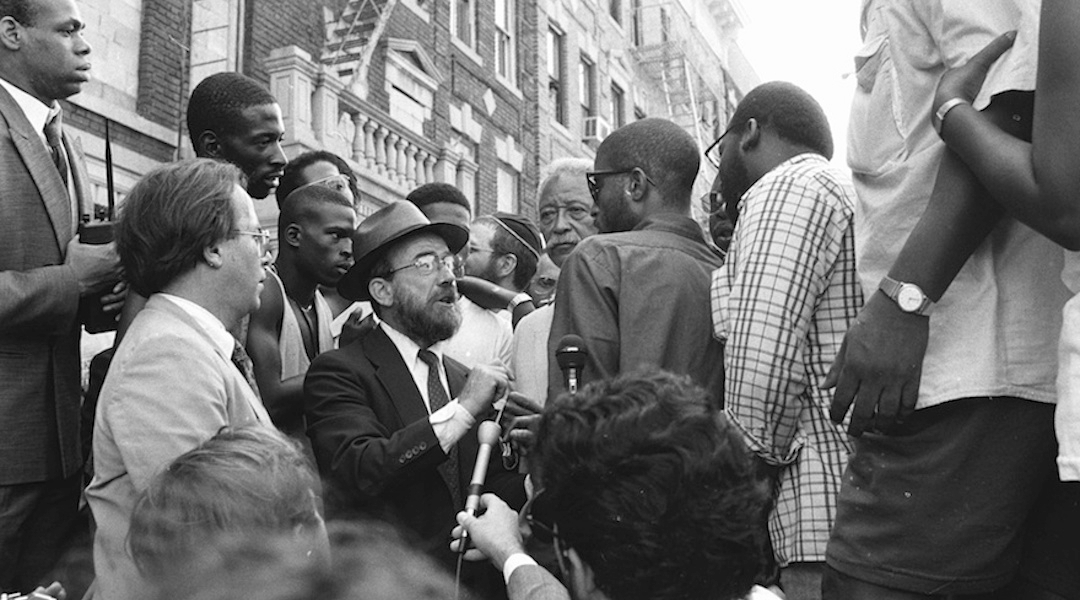 (New York Jewish Week via JTA) — The Crown Heights riots, which roiled the Brooklyn neighborhood over four days in 1991, were some of the most thoroughly documented events in New York City history: Covered in real time by local, national and global media, the violence was recounted by witnesses in numerous civil and criminal trials. The riots were also the subject of countless books, essays, documentaries and a one-person play.

Add to that canon now, six months after the 30th anniversary of the events, an exploration in that most modern form of media: a podcast.

“Love Thy Neighbor,” a five-episode series, was created, written and narrated by journalist Collier Meyerson and debuted this week as part of Audacy’s Pineapple Street Studios. It is a personal account of the riots by a Jew of color, depicting the unrest as “a flashpoint that shaped a dark new era of politics, policing, antisemitism and anti-Black racism in New York City.”

Meyerson was just 6 on Aug. 19, 1991 when a car driven by a Hasidic man accidentally killed 7-year old Gavin Cato, a Black child. A perfect storm of bad decisions, weak leadership and pent-up rage sparked widespread violence. Orthodox Jews were targeted by Black protesters, and a yeshiva student, Yankel Rosenbaum, was stabbed to death.

Meyerson views the events through the lens of her father’s work as a civil rights lawyer, which included defending people swept up in the events.

The podcast came from a desire to properly explore the events for her generation, and those to come. “I was talking to a friend who had only heard of the Crown Heights riot by name and was curious about the history, the context and the political implications of its fallout,” said Meyerson, who has contributed to The Nation, Wired, MSNBC (where she won an Emmy), The New Yorker and other media outlets. 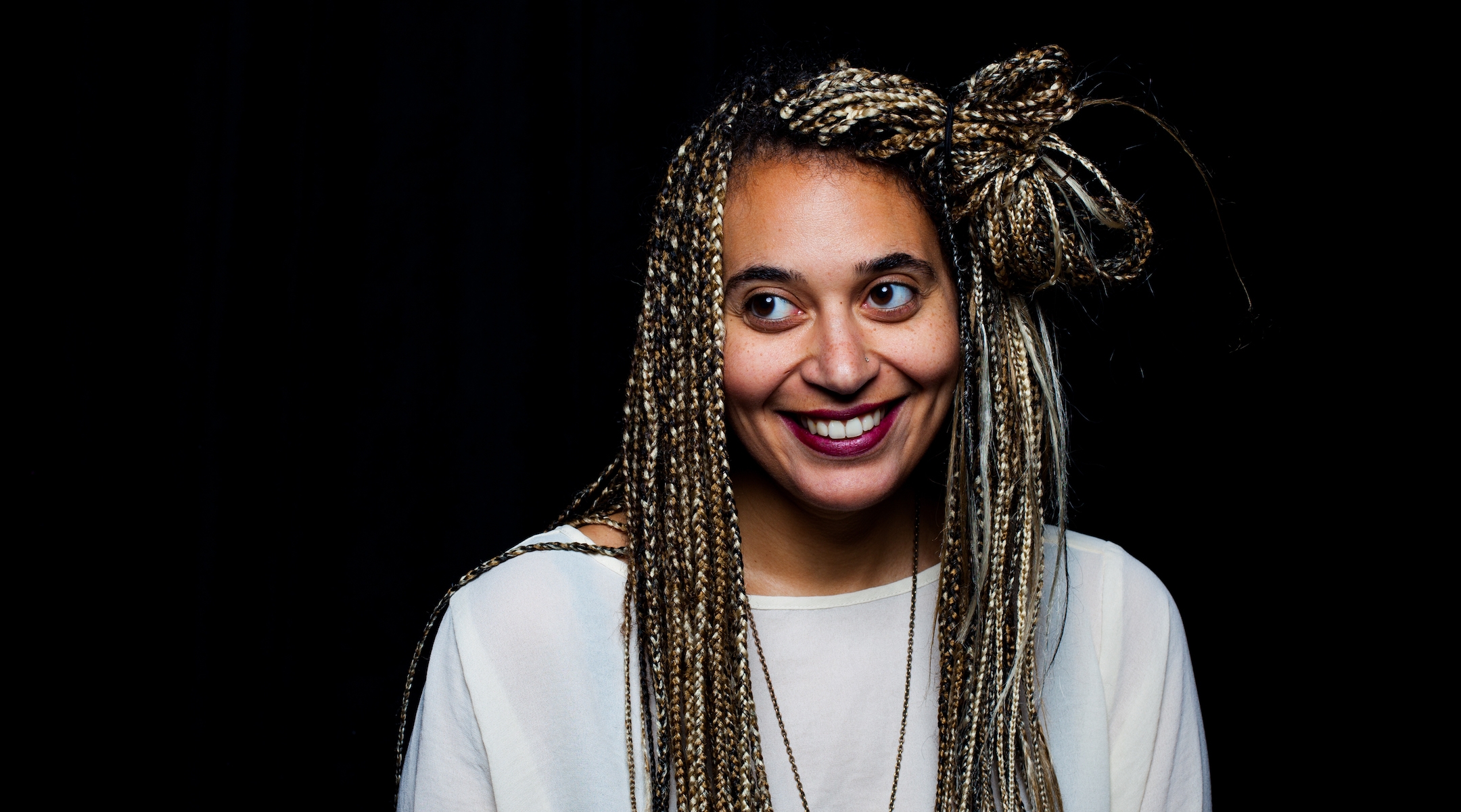 Collier Meyerson, creator of “Love Thy Neighbor,” grew up in Manhattan but spent eight years living in Crown Heights as an adult. (Pineapple Street Studios)

She grew up in Manhattan but spent eight years living in Crown Heights as an adult. Born to a Jewish mother and Black father —and later adopted by a Black mom and Jewish dad — Meyerson, like many Jews of color, sees the events as a painful clash between the two central parts of her identity.

Episode 1 starts with a retirement party in 2020 for the local police precinct’s community affairs officer, with each of the tributes putting a positive spin on how the community has healed its wounds. But on the streets, says Meyerson, “if you pay close attention, you are aware of the animosity just below the surface.”

Flareups between Hasidic community patrols and Black residents in the years since are noted, and Meyerson says there is no denying the persistence of Jewish racism and Black antisemitism, sometimes palpable but often more subtle.

Meyerson also explores the hot-button, widely disputed question of whether the 1991 violence was a two-sided clash, rather than an antisemitic campaign — what some even called a pogrom — against Jews. The podcast cites eyewitness and media reports that Hasidim returned fire, throwing rocks and bottles and occasionally scuffling with the rioters. (Journalist Ari Goldman, who covered the events for The New York Times, later wrote an essay for The New York Jewish Week saying he never saw any violence by Jews against Blacks, and criticized The Times for suggesting both sides were culpable.)

“I have a really hard time telling anyone from Crown Heights that their view or experience of August 1991 is wrong,” Meyerson told The New York Jewish Week in an email interview. “My intention was never to be an arbiter of some universal truth, but to pull back the layers of two vastly different experiences, and hopefully add a context that wasn’t there before.”

Some bristle at such “context.” Chabad-Lubavitch spokesman Motti Seligson is featured in the podcast taking offense to the notion that the events were less a riot than an “uprising” stemming from Black residents’ resentment of what they considered the Chabad community’s oversized political power. That narrative, he says, borders on justification for the violence.

“There are some in the Hasidic community who have told me that to even try and give it context is wrong and I certainly respect that point of view,” Meyerson said. “But I really do believe it was a worthwhile endeavor and hopefully one that would get people from both sides to view what happened before, during and after the riot just a little differently.”

Episode 2 takes a close look at Mayor David Dinkins’ handling of the riot — or perhaps lack thereof, which cost the city’s first Black mayor reelection. Hesitant decisions and missed opportunities are explored, as well as the pervasive allegation that he held the police back in order to allow the rioters to vent their rage. That notion was never proven in court proceedings, nor asserted in the state’s exhaustive review of the events, known as the Girgenti Report. Dinkins took great exception to that notion until his death in 2020. “Love Thy Neighbor” asks if the clashes in Crown Heights in Aug. 1991 were two-sided, or if Black rioters targeted Jews. (Pineapple Street Studios)

“I thought he got a fairly bad rap during the Crown Heights riot and that it was unfortunate because he really was a champion of so many Jewish causes and believed so much in the possibility of Jewish and Black alliance,” Meyerson said. “I do think that he stumbled a bit during the course of those four days with the Lubavitch community and that it caused him to lose support in that community.”

Episodes delve into the early years of Crown Heights as it became home to two waves of immigrants, Jews from Europe and other parts of America, and Black immigrants from the Caribbean. A tale of two neighborhoods emerges, as the City Council district in 1976 was split in two in an apparent effort to give Jews a solid contiguous voting block. The city treated the Lubavitcher Rebbe, Menachem Mendel Schneerson, as a world dignitary, complete with NYPD guards. “They have certain rights that we don’t have,” a Black resident tells Meyerson.

The riots were preceded by the tense 1989 mayoral election between Dinkins — propelled into the Democratic nomination by racial strife surrounding the murder of Black teenager Yusef Hawkins by a white mob — and Republican candidate Rudolph Giuliani, who worked unsuccessfully to paint Dinkins as weak on crime. (His strategy would prevail in their 1993 rematch.)

Meyerson sees those campaigns, as well as the policing strategies of Giuliani and his successors, as infused with racism. It was in that atmosphere that a false rumor spread that police and medics left young Cato to die, while rushing the Hasidic driver and his passengers to the hospital. We hear from the police officer who ordered the Hasidim to leave the scene, for their own safety, a reminder that the road to hell is paved with good intentions.

But “Love Thy Neighbor” is as much an exploration of identity and perception as it is of history. We see the cultural differences between African Americans and their Caribbean American neighbors, who never felt life as a minority in their birthplaces. We also hear from Jews who reject being labeled as white, such as an Iranian-born Chabad member who rejects being “caught up in a binary.”

During her time living in Crown Heights, Meyerson says she was never approached by Chabad, which is well known for outreach to less observant Jews. “I had a joke with a friend, who is Irish Catholic, that she was approached more than I was,” Meyerson says. “Outreach has changed a lot since I was living there, I can say that from personal experience. But at the time, because I was secular and because I wasn’t perceived as Jewish, I really didn’t have a lot of interaction with the Hasidic community in Crown Heights. However, the West Indian community really embraced me, ironically, because they thought that (because of the way I look) I was from one of the islands.”

In her personal reflections, Meyerson cites the sociologist and writer W.E.B. Dubois’ words about “double consciousness,” or the ability of Black people to see themselves as white people see them. As a Black Jew, she has long been mindful of attempts to “strip me of my Judaism” by asking questions about her lineage no white Jew would face.

Perhaps that’s why in Crown Heights she seems to see a metaphor of two parts of a whole that want to unite, but can’t quite find a way to do so.

“Love Thy Neighbor” is available on the Audacy platform (www.audacyinc.com) and wherever podcasts are available.

Adam Dickter was a reporter and editor at The New York Jewish Week from 1992-2014. His coverage of the aftermath of the Crown Heights riots won Simon Rockower Awards from the American Jewish Press Association in 1997 and 1999.