Argentina’s Córdoba province is known for its sense of humor. A new virtual Jewish museum celebrates that. 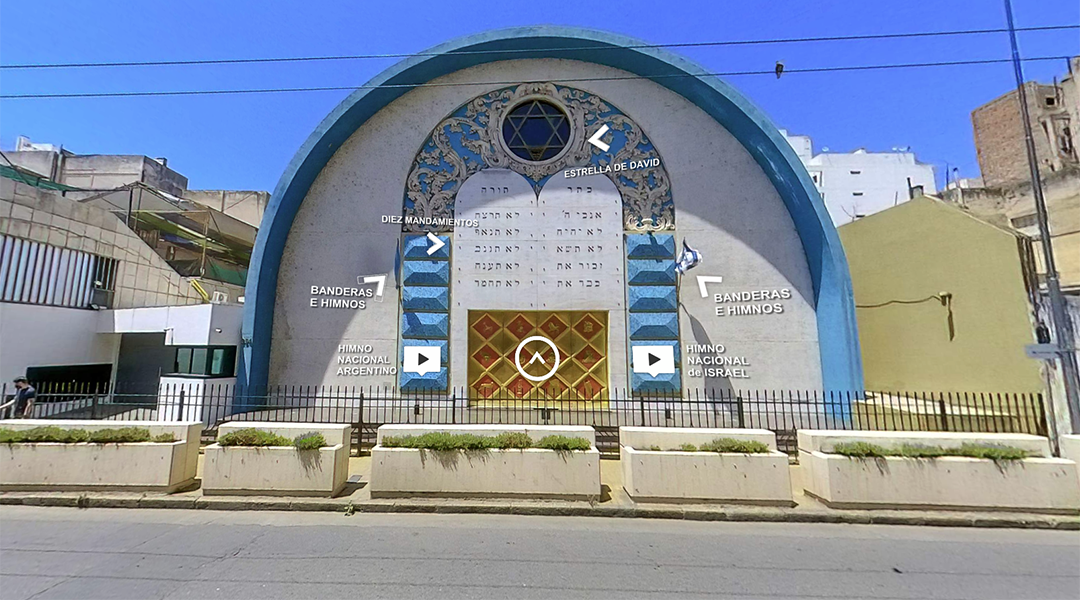 A screenshot of Centro Unión Israelita synagogue via an interactive tour on the museum website. (Screenshot from Museo Judio de Córdoba)
Advertisement

BUENOS AIRES (JTA) — Up until the COVID-19 pandemic, the Jews of Córdoba, Argentina’s second-largest Jewish community, were on track to do what so many other communities around the world have done in recent years: Open a museum devoted to showcasing local Jewish life and history.

But COVID presented an array of logistical and financial challenges that proved too hard to overcome. So the umbrella group behind it made another common pivot — and made the project entirely virtual.

Going virtual “was a new challenge but it was also full of possibilities. For example, the ability to be interactive and also the possibility to include new material, documents, photos, without a physical limitation,” said Marcelo Polakoff, senior rabbi of the Masorti Centro Unión Israelita synagogue, Córdoba’s main temple.

Launched last month by the Centro Unión Israelita — which consists of the synagogue and a separate cultural organization — the virtual “museum” includes a timeline of Córdoba’s Jewish history; a 360-degree panoramic tour of the synagogue; explainers on Jewish rituals and holidays; a global map about the places where Córdoba’s Jewish immigrants came from; testimony from a local Holocaust survivor; and an interactive map of the Jewish sites in Córdoba city (Córdoba is the name of both a province of over a million people and its largest city), which include an outdoor Israel Square and a monument to Anne Frank.

The museum’s director, Florencia Magaril, said that a lot of the content comes from documents and objects previously found in the basement of the synagogue.

“Now the objects and the file, the whole history, is available online,” she said.

The 360-degree synagogue view and an archive page, full of photos and audiovisual recordings from the community over the years, have proven popular, Magaril said — especially because the site is aimed at both Jews and non-Jewish visitors, the latter being fascinated by the synagogue interior. But another fun section has stolen the show: the “Idishometer,” a quiz on Yiddish words and their Spanish translations. 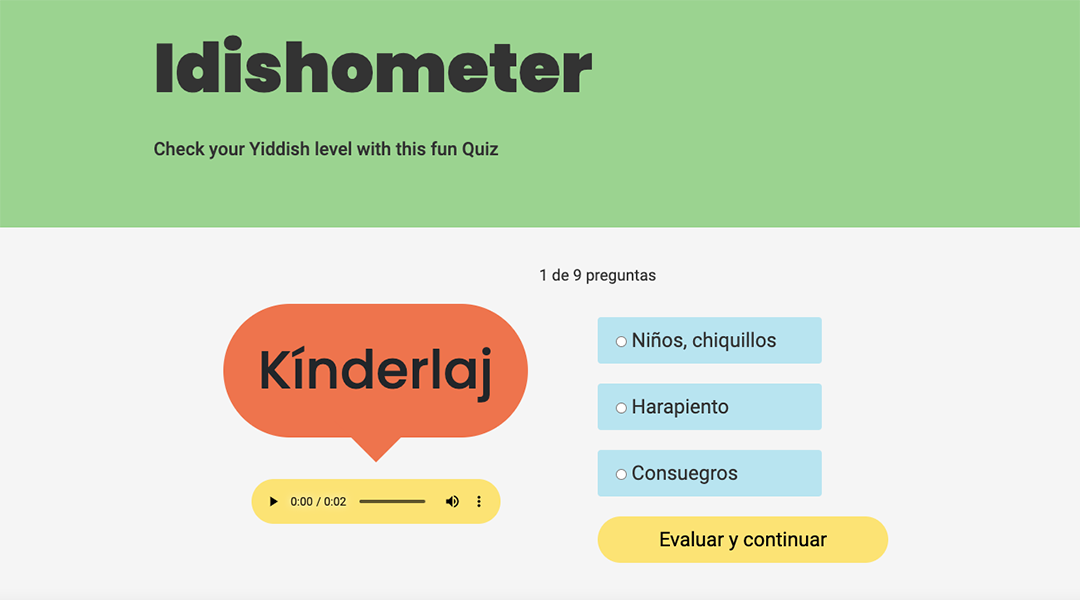 Play is incorporated in the virtual museum via the “Idishometer.” (Screenshot from Museo Judio de Córdoba)

This reporter only answered 67% of the answers correctly, so the system said “you need a lot more knishes and visits to your bubbe, but you are learning pretty well.”

The quiz is representative of something Córdoba residents are known for: a great sense of humor. They are known as a festive and funny people, from their famous style of music (the playful cuarteto genre) to their favorite drink (the fernando, a mix of the Italian Fernet liquor and cola). Even their representative in parliament, Luis Juez, is an ambassador of sorts for their humorous culture.

Córdoba’s Jews are an integral part of the gang — Centro Unión Israelita President Hugo Waitman boasted that the synagogue’s two rabbis are “very funny people.” The virtual museum links to some of the congregation’s goofy videos from over the years.

“We don’t have a specific station about humor, but yes, the characteristic of being funny people is present in the ‘idishometer’ and also in the whole playful concept of the museum,” Magaril said.

The museum concept originated in 2015, as the community, now a diverse mix of around 8,000 people, celebrated an approximate centennial. The area’s first immigrants arrived between 1900 and 1915, said Waitman, who doubles as a historian of Córdoba Jewry.

The congregation began researching their own history, tracking how some Jews who arrived at the port of Buenos Aires traveled over 400 miles northwest to the area full of natural resources, green land, bodies of water and mountains. They printed a document outlining the history, but agreed that there was potential for more, and room to pay tribute to their ancestors.

“After the century celebration the members agreed that we needed to have a museum, specially to pay respect to the immigrants that came without speaking the language,” Waitman said.

German Simon Ostwald is believed to be the first Córdoban Jew, arriving in 1870. Twenty years later, eight complete Jewish families arrived: four from Russia, one from Austria, two from Spain and one from Italy. It is estimated that, at the beginning of the 20th century there were a total of 35 people.

The Centro Unión Israelita communal group was founded in 1906, and two years later came a Hebrew school. The first synagogue was inaugurated in 1916, and the first Jewish cemetery in 1923.

The online museum’s timeline also recalls that the first ever woman in the province’s entire history — Jewish or non-Jewish — to earn a university degree was a Jew. Margarita Zatzkin, who immigrated from Odessa at age 7, graduated with a pharmacy degree in 1905, earning a medical degree three years later (the first woman from Córdoba to do that as well).

Albert Einstein is also part of the museum. Its timeline includes photos of his visit to the community as part of a trip to Argentina in 1925.

The timeline does not skip over dark events either, such as an explosives attack on the synagogue on Oct. 18, 1945. 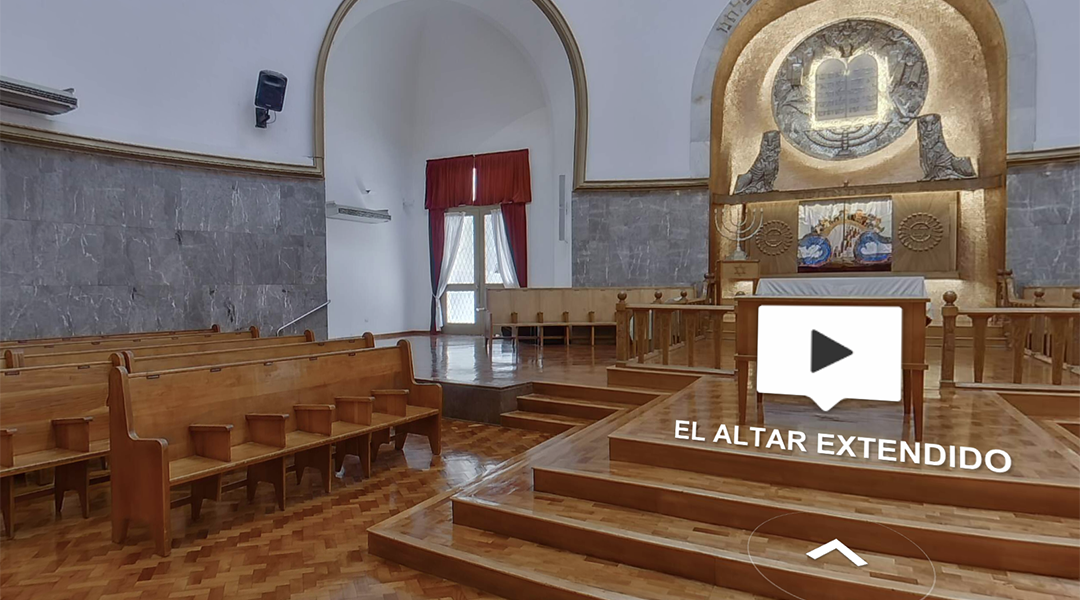 A view of the 360-degree panoramic tour of the interior of the Centro Unión Israelita synagogue. (Screenshot from Museo Judio de Córdoba)

Polakoff noted that Córdoba, at least in relation to other Jewish communities around the world, has not ever seen high rates of antisemitism.

“I always go walking with my kippah and never have any bad experiences,” said Polakoff, who moved from Buenos Aires to Córdoba 20 years ago. “Maybe one of the reasons is the work that we have done with Christians and Muslims, here promoting coexistence and good relations, in a very visible way.”

In an example of that work, 30 leaders of different religious traditions from Latin America and the Caribbean signed in 2017 what was called the “Córdoba Declaration,” identifying the region as an area of ​​interreligious coexistence. It was an initiative of COMIPAZ, the first formal interfaith committee in Argentina.

The focus of the museum is similarly on brighter things. Things like the “Idishometer” make the most impact on non-Jews looking to learn about Jewish culture, the museum’s leaders say.

“We think we give our community everything within our reach to comfort them, and we seek that our community be good, and this includes happiness, humor and joy,” Waitman said.