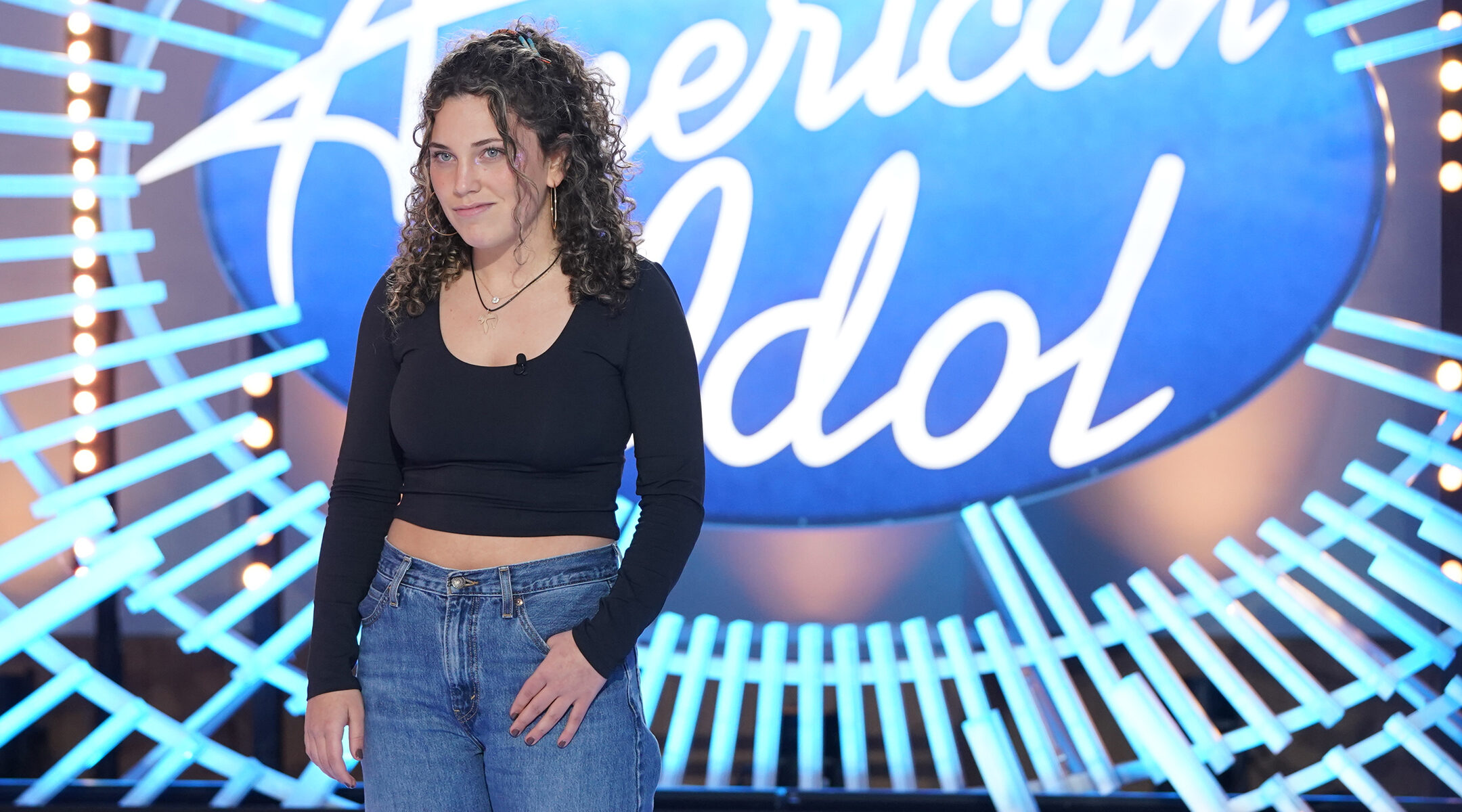 (JTA) — Could the next Jennifer Hudson or Kelly Clarkson be a senior at a Modern Orthodox high school in Los Angeles?

If Danielle Finn has her way, that’s exactly what will happen starting Sunday night when she competes on the new season of “American Idol,” the popular TV singing competition that has launched the careers of pop stars including Hudson, Clarkson and Carrie Underwood.

Finn cites Adele and Amy Winehouse, another Jewish singer with a soulful voice, as inspirations, along with Stevie Wonder and the contemporary R&B artists Giveon and H.E.R. The 12th grader at Los Angeles’ Shalhevet High School wound up in the “American Idol” audition pipeline after her rendition of the Gnarls Barkley song “Crazy” went viral on TikTok and her mother’s best friend sent the video to an acquaintance who works at the show.

“I told all my friends that I was going to go and they were freaking out,” Finn told the Jewish Telegraphic Agency. “My teachers were so excited for me too.”

Finn, who wore a chai necklace to her audition, isn’t allowed to say how she fares in the competition. But she talked to the Jewish Telegraphic Agency about her pride in representing observant Jews on the show, what she sang at her bat mitzvah party and how much it meant to her that her school let her sing in front of a crowd that included men — something that not all Orthodox schools would allow because of Jewish law.

Finn: I did my Zoom audition first. You sing for a bunch of producers from the show. There’s a lot of people on the Zoom — it’s really intimidating. And then if they like you there’s another Zoom and you sing the same song one more time. And then they decided that I was going to actually audition in person in front of the judges. So that was super exciting. That was over the summer. And then I told all my friends that I was going to go and they were freaking out. My teachers were so excited for me too. And then in October, I actually went to the audition. It was such a cool experience, sitting with all these musical people outside the audition. I’m still friends with a couple of the people I auditioned with.

Can you tell me about your singing background? You must have had a pretty cool bat mitzvah.

I did perform at my bat mitzvah party! I didn’t want to be that person. I didn’t! But my go-to song is “Feeling Good” by Michael Buble. So everyone was saying I had to sing this song at the end of the night. I was embarrassed but I said fine, I’ll do it. And then I was in the best mood. It’s the best day ever, right?

My mom said I’ve been singing since I was a child. There are videos of me singing Hebrew songs after preschool. I’ve had singing lessons since I was 7 or 8. That’s when I found out I have a really low voice. A lot of girls don’t have that, so now I really appreciate the low parts of my voice. I’ve been working on reaching higher notes recently too.

How has your talent for singing interacted with your Jewish observance?

I’m Modern Orthodox. I love my school because it’s a place where you can learn to be your own Jew and person. For example, they let me sing the national anthem at a basketball game. It was definitely a question, because there were a lot of other religious schools there that don’t accept it [a woman singing alone in front of men]. But they made an announcement and anyone who wanted to leave the room could. They said that this was something that we do in our school and we don’t want to hide from that. So they let me sing. I think it’s super fun to be able to do that.

So for your observance, singing alone as a woman in front of men is not an issue for you and your Jewish practice?

Right. It’s my passion and I can’t – and don’t – want to ignore that. Being in a Modern Orthodox school my whole life, I’ve learned a lot about it. From what I’ve learned and from how I’ve been raised, I’ve decided [singing] is a big enough value of mine that it’s something I should do.

What was it like keeping kosher and observing Shabbat during the American Idol process?

They made it super comfortable. They give you two or three meals a day, and I gave them my meal preferences before. There was an interview I was supposed to give on a Friday and I asked if I could do it before sundown, and they said that we could do it earlier in the day or if it conflicted too much with my schedule they already had enough footage and it was no problem. I’ve been in other situations where I’m one of the only Jewish people and honestly it can be pretty intimidating and nerve-wracking to ask to switch up the system. But they said it was no problem, so that was really cool.

Do you feel like you’re representing observant Jews on primetime? How does it feel?

I honestly feel like I am. I bring it up in my interviews and it’s a big enough part of my life. Even if I don’t talk about it 24-7, just by wearing my chai necklace and being a kind person to everyone around me and the staff around me, I feel like I’m making a great representation of the Jewish community.

Your Instagram has a “Santa Baby” rendition on it. Can we look forward to a “Hava Nagila” or an “Adon Olam”?

A lot of my friends have been making jokes to me saying I should do a Jewish or Hebrew song. So if there is a Hebrew song that I feel connected to and I feel like I can sing well… If a song speaks to me, I’ll put it out there, no question!

What are your watching plans for the premiere on Sunday? And what comes next for you?

A lot of my friends will come watch and my family will be there. We’ll get some burgers and fries and we’ll sit down and watch it. I’m so nervous — but it’s going to be great!

I write my own music, too, and I’m going to have a song coming out in about three weeks. It’s called “Brace Yourself.” I write a lot of my music. I’m just waiting to get it all out there, eventually.