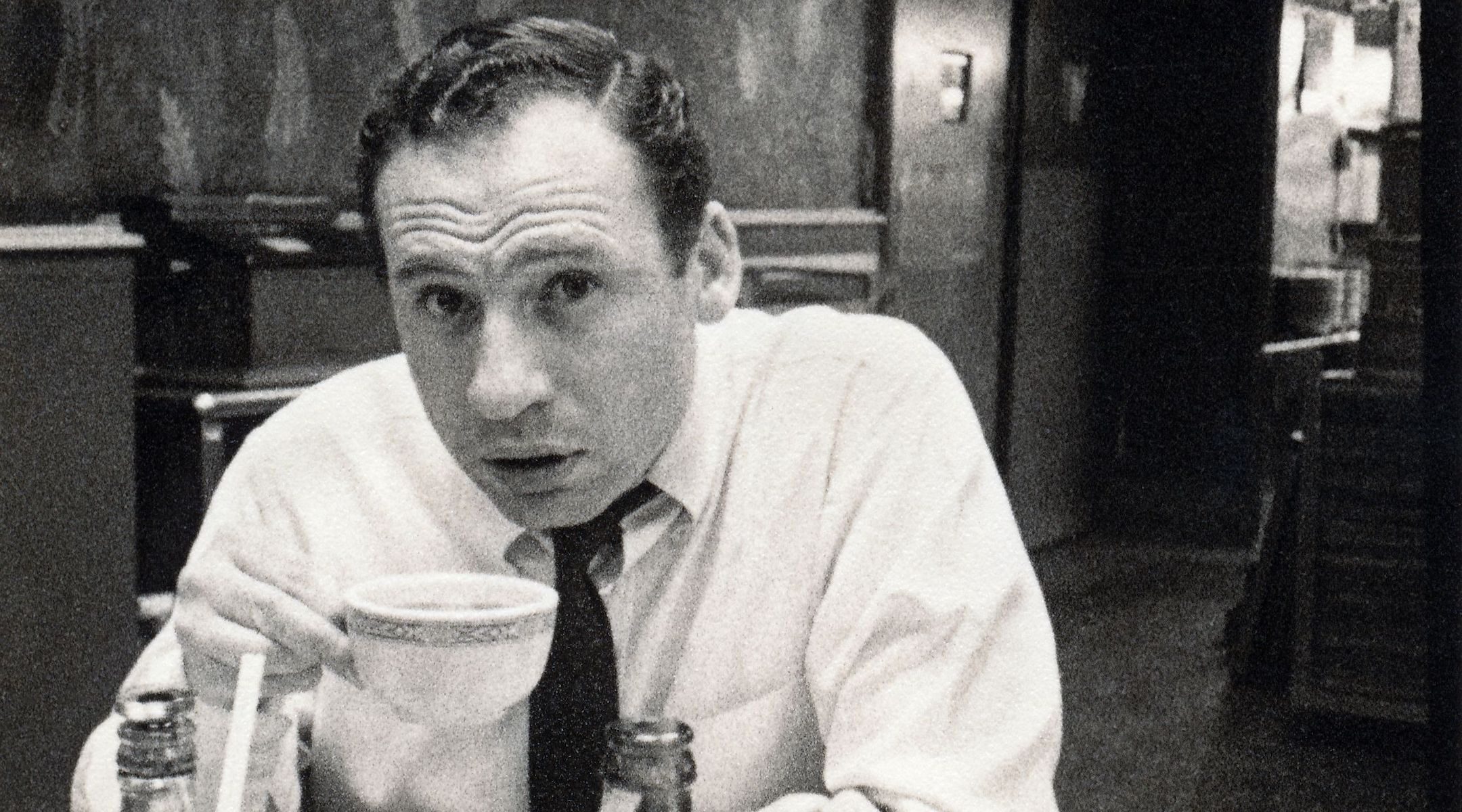 Mel Brooks drinking coffee at the Automat in New York in the 1950s while a writer for "Your Show of Shows." (Carl Reiner/courtesy of Film Forum)
Advertisement

(New York Jewish Week via JTA) – If you never experienced a meal at an Automat — an innovative “automated restaurant” that was once a fixture of mid-century New York City — then allow iconic Jewish comedian Mel Brooks to explain:

There was nothing like the coffee at the Automat
Its aroma and its flavor were supreme
From a silver dolphin spout
The coffee poured right out
Not to mention, at the end, a little spurt of cream.

“At the Automat,” Brooks’ original song celebrating the joys of this unique type of restaurant — particularly its five-cent coffee — plays over the end credits of “The Automat,” a new film that the funnyman describes as a “meshugenah documentary” about the eateries.

The playful, nostalgic film by director Lisa Hurwitz charts the history and culture of Horn & Hardart, the company behind the ur-fast food restaurants in Manhattan and Philadelphia that promised, under a somewhat dated slogan, “Less Work For Mother.” The food was served through small, coin-operated glass doors.

The chain’s low prices and unique service model helped it thrive during the Great Depression and into the 1960s, attracting scores of downtown lunch-goers. Hurwitz, a former talent booker for Seattle’s Jewish community center, calls in a cavalry of New York Jews to reminisce about the joys of waiter-less dining.

Brooks and his late friend and comedy partner Carl Reiner both sheepishly admit that their go-to order was the ham-and-cheese sandwich. Ruth Bader Ginsburg says she believes that the eatery attracted a unique and democratic cross-section of America because it did not require anyone to speak English in order to eat. Jewish actor Elliott Gould also waxes nostalgic.

Archival footage recalls how the famously cheap Jewish entertainer Jack Benny once hosted a gala ball at the Automat, handing every celebrity a roll of nickels as they walked into the establishment in their formal wear.

Hurwitz self-financed and shot the film over a decade, which accounts for the many interviewees who appear posthumously – not just Reiner and Ginsburg, but former Secretary of State (and Yiddish-speaking son of the Bronx) Colin Powell and, significantly, John W. Romas, the former vice president of engineering for Horn & Hardart. Romas describes how he helped design and build the coin-operated contraptions that brought forth the bargain delicacies.

Also appearing is the Jewish chairman and former CEO of Starbucks, Howard Schultz, who notes that his chain took a lot of inspiration from the restaurants. “I always had the Automat in my mind’s eye,” he explains. “How do you create that level of theater, excitement, surprise and delight?” (Schultz, whose employees are engaged in a growing unionization effort, is absent during the segment of the film that discusses a failed union drive by Horn & Hardart employees.)

But the highlight of the film is unquestionably Brooks and his song, celebrating a time when you could get great coffee poured out of a spigot for a nickel. Ironically, according to Hurwitz’s film, that coffee would prove to be Horn & Hardart’s downfall, as the company lost money on every cup yet refused to raise its prices for years. Faced with competition from savvier cheap-coffee purveyors like Chock Full o’ Nuts, a mass exodus of customers to the suburbs and a growing perception that its establishments were becoming gathering spots for homeless people and drug addicts, the Automat withered throughout the ’70s and ’80s until closing its last remaining store in 1991.

Today, signs of the restaurant’s influence are cropping up once again in modern establishments, from self-pour taprooms to a new automated dumpling shop in the city. Perhaps the Automat, and its silver dolphin spout, could make a comeback.

“The Automat” is currently playing in New York at the Film Forum and in Los Angeles, with more nationwide theatrical showings to follow.