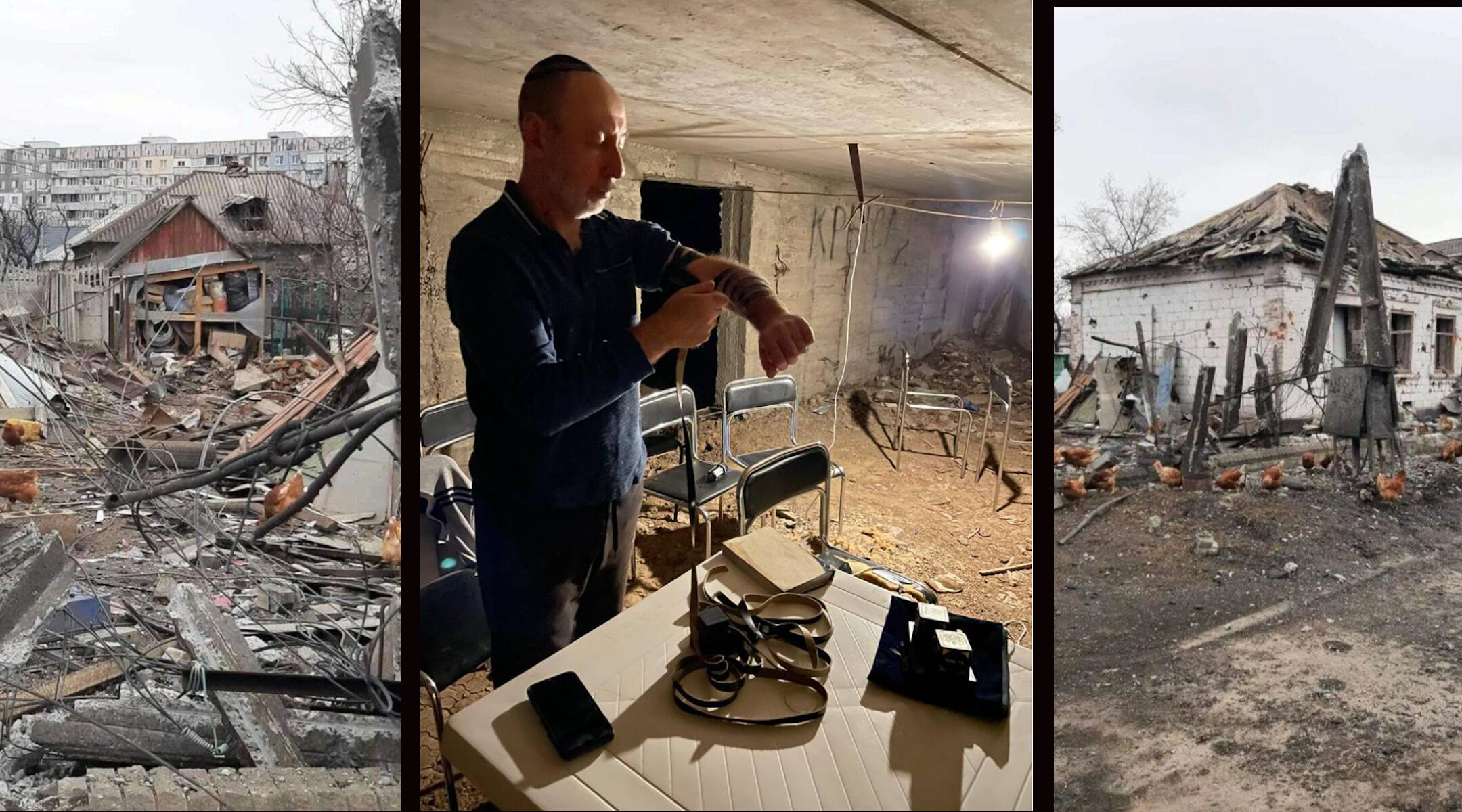 A Jewish man puts on tefillin, prayer phylacteries, before praying in a bomb shelter in Mariupol, Ukraine, during the first week of Russia's war on Ukraine. The city has been heavily damaged and officials warn of a potential catastrophe there if humanitarian aid is not permitted. (Photos provided to JTA)
Advertisement

(JTA) — Shelter, vital supplies, and escape from besieged cities: these are the keys to survival many Ukrainian Jews are seeking as the Russian invasion enters its second week.

Ukrainian and Russian negotiators on Thursday acknowledged a need for humanitarian corridors for civilians, reflecting growing fears about an imminent crisis in multiple major cities under attack.

Today, Ukrainian officials said the Russians were not upholding their end of the deal. If those corridors are not established and maintained, Ukrainians across the country could soon run out of food, medicine and other supplies.

“Nobody’s bringing food or medicine to where we live,” said Anna Zherber, whose family fled Kharkiv for their country house about 50 kilometers away when the war began. They have been venturing to nearby villages to buy supplies when absolutely needed.

But if goods become scarce in the small towns they are dependent on or leaving the dacha becomes dangerous, as Russia’s continued siege suggests could soon happen, the family — an extended group of eight — would soon be in trouble. How much food and medication do they have with them now?

The Zherbers’ situation is better than most. Ensconced at their country house, they had not faced the constant shelling that those who stayed behind in the city were experiencing. Kharkiv has faced one of the most punishing assaults, and a communal response has begun to fracture in recent days, according to Dmitry “Yishai” Shapovalov, 36, a veteran of the Israeli Defense Forces who lives there with his mother and two children.

Last week, Shapovalov said, he stopped by the historic Kharkiv Choral Synagogue to pick up challah, chicken and wine for kiddush for Shabbat.

Anywhere from 20 to 100 residents have been living in the event hall below the ground floor of the historic Kharkiv Choral Synagogue since the war began, according to accounts from the city’s chief Chabad emissaries Rabbi Moshe and Miriam Moskovitz and other locals.

Kharkiv was Ukraine’s second-largest city at the outset of the war, with a population of 1.4 million. Among them were as many as 40,000 Jews, one of the largest communities in the country. Much of the city’s Jewish infrastructure is located in the city’s center, and the buildings housing Chabad’s Ohr Avner Jewish Day School and Hillel International’s local chapter were among those struck in recent days.

Now, with what Shapovalov said appeared to be about 60% of the city’s population gone, Jews in the city were using a Telegram channel to crowdsource space in cars attempting to head west to Dnipro, another major Jewish center, and points beyond.

The Moskovitzes evacuated from Kharkiv on Wednesday with their family and other local Chabad emissaries, themselves heading to Dnipro, but people continue to shelter in the synagogue’s hall and collect free meals from its kitchen. 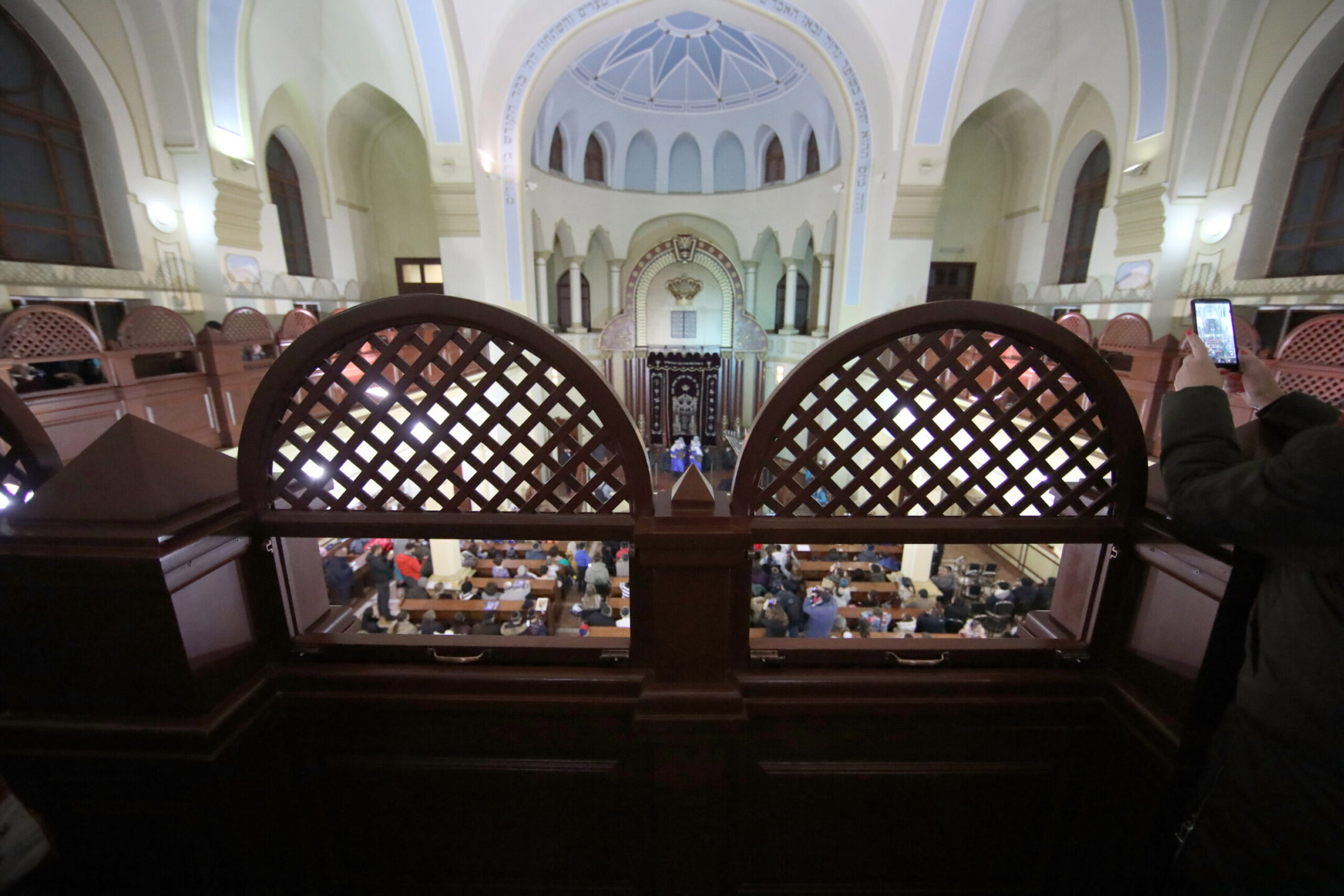 The Kharkiv Choral Synagogue hosted a Hanukkah celebration in 2018. Now it is home to Ukrainians seeking refuge from Russian bombs. (Vyacheslav Madiyevskyy/Future Publishing via Getty Images)

There is no official community evacuation effort to turn to right now, Shapovalov said. It is up to individuals to work together.

Leonid Plotnitzky, 50 knows that volunteers are trying to shuttle people out of the country’s hot spots, but he is staying in Kharkiv because he wants to remain near the son he shares with his ex-wife.

“In case he needs my help,” said Plotnitzky, a physical education professor and a former powerlifting coach who said he is ready to join in the defense of Ukraine at any moment.

Conditions are worse yet in the southeastern city of Mariupol on the coast of the Azov Sea, where officials warn of a coming catastrophe if conditions do not soon change. There, Yulia Tirgum, her husband, and their two children are trapped in their apartment with no electricity and no heat. Only a thin stream of water flows weakly from their faucets, and there is no guarantee how long even that will continue.

Still, home remains the best of what are only bad options right now.

“It’s almost impossible to leave the house, because you don’t know where the bullet might find you,” Tirgum, 40, texted Thursday via the messaging app Viber, one of the only ways she was able to reliably communicate, and then only intermittently. “Do not listen to anyone [saying] that the civilian population does not suffer, this is not true. Now our cell phone connection and the Internet are disconnected so we can not talk about it.”

She described continual waves of missiles and rockets from air, land and sea. At the start of the war, they hit the outskirts of the city, but now they pummeled its center as well. Earlier this week, a missile struck in the yard outside her complex of nine-story apartment buildings. She and her family were in an interior hallway of their building at the moment of impact.

“That saved us, but it was very scary,” she wrote. “The house was shaking as if we were riding a train.”

The explosion shattered the windows of three buildings in the complex and the nearby school as well. “Everyone who was on the street at that moment was injured or perished,” she wrote, including a 16-year-old student from the local high school.

The experience has been very different from when conflict between pro-Russian separatists and pro-Ukrainian nationalists broke out in eastern Ukraine in 2014. Then, she recalled, the power stayed on, there was access to food and gas for vehicles, and shelling was limited to the city’s eastern outskirts. Critically, it was also possible to leave: Her husband stayed on in the city and continued going to work, but she and their children retreated to the countryside before the situation eventually improved.

“Now there is nowhere to run away, we are surrounded,” she wrote. “They do not let us out of the city and it is very dangerous, they are shooting everywhere.”

It appears that it may be growing too late for many of those who remain in Kharkiv to evacuate, too. Anna Zherber’s grandmother insisted on remaining there, as did cousin and his wife. The Zherbers hear that there are explosions “every minute, every 10 minutes, every half hour — it’s too much,” she said. “Houses are burning. This is terrible.”

The Zherbers have relatives in Israel, Germany and the United States, but they don’t plan to flee further than their family cottage outside the city.

“We decided not to evacuate because this is our country,” said Anna. Calling Ukrainian antisemitism “Putin’s fantasy” and speaking through tears, she said she wanted people outside Ukraine to know that the Russian president is a liar and a fascist. “Ukraine is an independent country and we want to live in peace.”