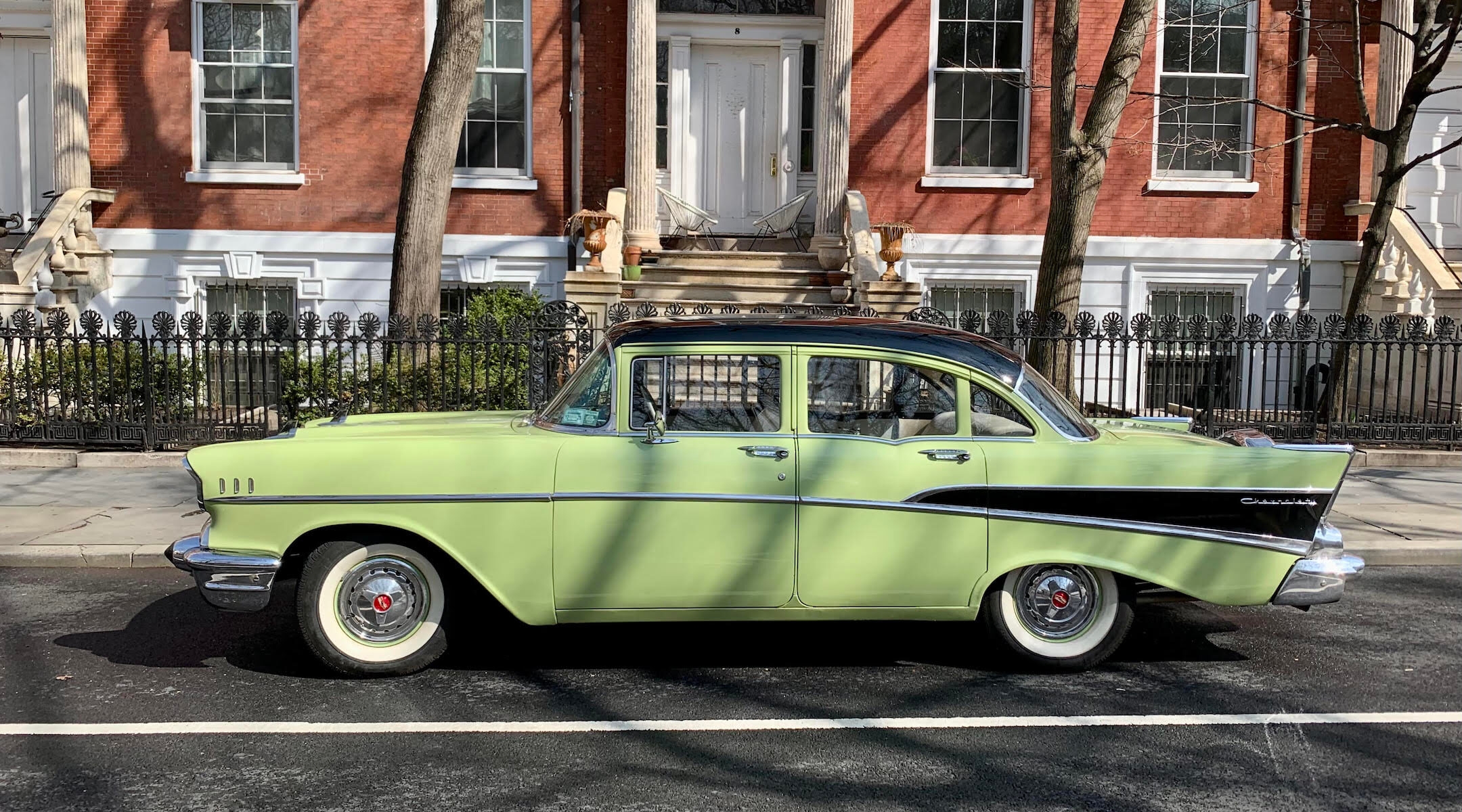 (New York Jewish Week) — “The Marvelous Mrs. Maisel” aired its fourth season finale on Friday, but if you’re not quite ready to say goodbye to Midge and the rest of the very Jewish gang, the show’s real-life locations across Manhattan are just a vintage car ride away.

The Marvelous Mrs. Maisel Sites Tour from On Location Tours — which takes fans of the Amazon hit series to seven locations from the show — began in late 2019 as a bus tour. After a hiatus during the height of the pandemic, the tour makes a return to the streets — this time, in a 1957 Chevrolet Bel Air. The car itself actually made an appearance in the show’s second season as Midge’s father Abe Weissman’s car, which the family drives to the Catskills.

For $150 per person, you get up to three seats in the private car, according to On Location’s promotional copy. “Cruise through Manhattan, see the sights, and get a first-hand look at where some of your favorite characters came to life!” the company promises.

In the name of journalism, I nabbed a seat on a “sneak peek” of the tour. 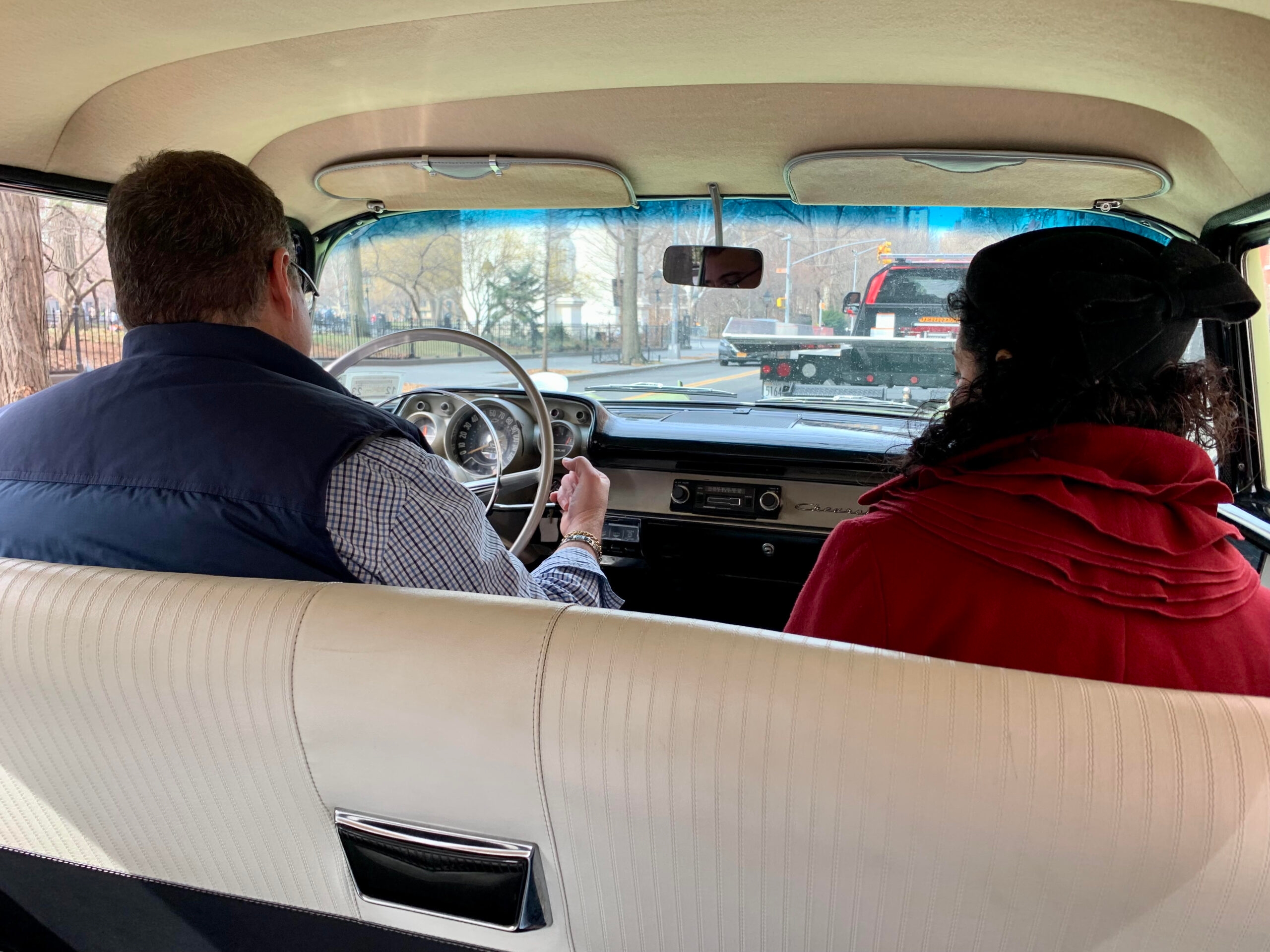 Travel back in time from the comfort of a 1957 Chevrolet Bel Air. (Jackie Hajdenberg)

One of the stops is the location of the original Gaslight Cafe on MacDougal Street in Greenwich Village, where Midge begins her venture into standup comedy. Though the cafe only operated from 1958 to 1971 — today, it’s a stylish cocktail bar called The Up & Up — the neighborhood is jam-packed with comedy clubs, such as the Comedy Cellar and the Village Underground, where young comics today get their starts and veterans sell out the room. 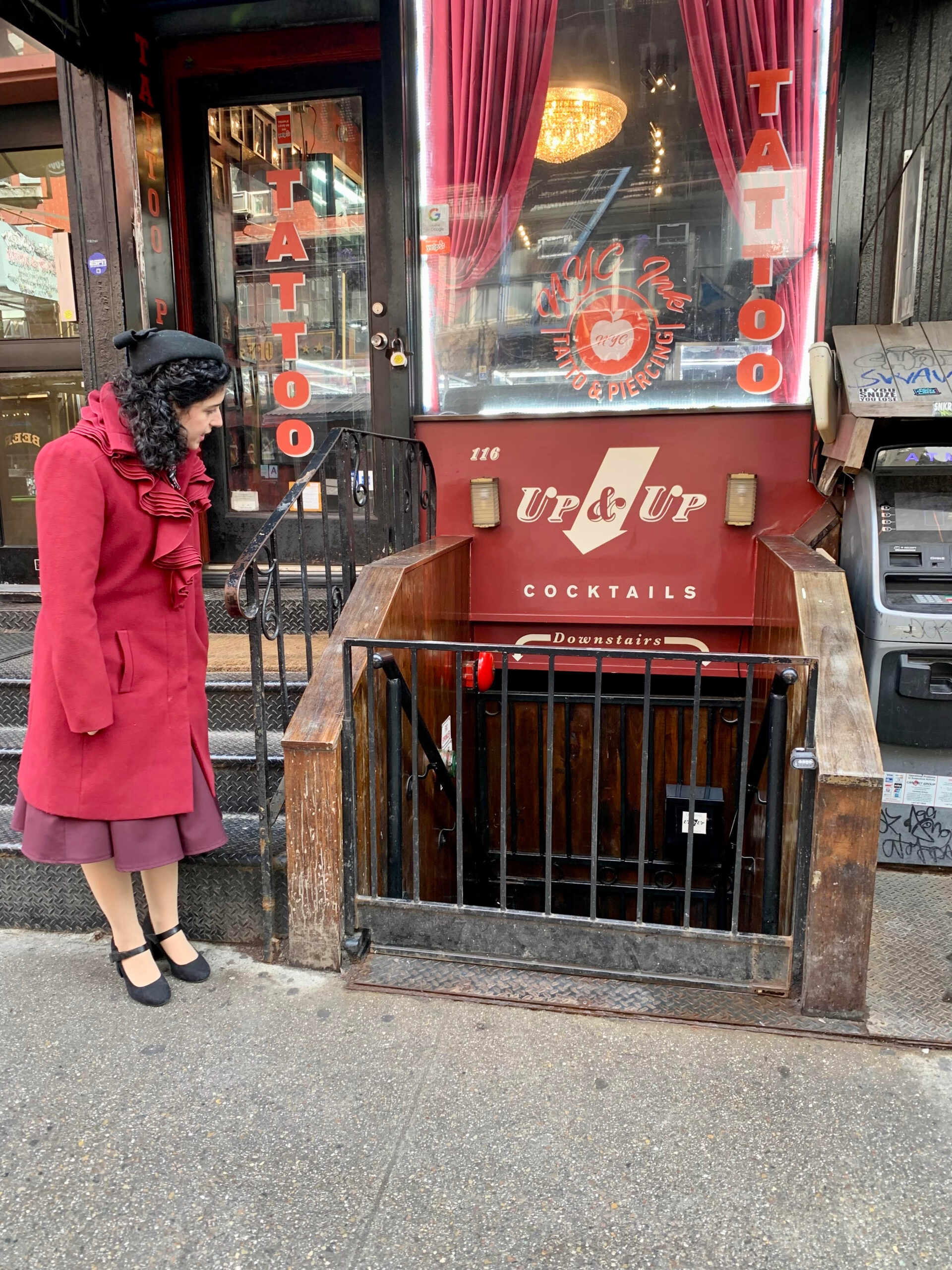 Tour guide Stephanie Windland points out the original location of the Gaslight Cafe, where Midge gets her start in comedy. (Jackie Hajdenberg)

Other locations on the tour include Caffe Reggio (119 MacDougal St.), where Italian immigrant Domenico Parisi brought the first cappuccino to America — and where Abe Weissman (Tony Shalhoub) meets his lawyer when he gets in trouble with Bell Labs. There’s also the Music Inn (169 W. 4th St.), where patrons can browse vintage records and a variety of string instruments, and where Joel (Michael Zegen) hears Midge’s standup on a record for the first time; and Lutzi’s Butcher Shop (Albanese Meat and Poultry at 238 Elizabeth St.) where in, in the premiere episode, Midge is shopping for Yom Kippur break fast and exclaims, “We got the rabbi!” 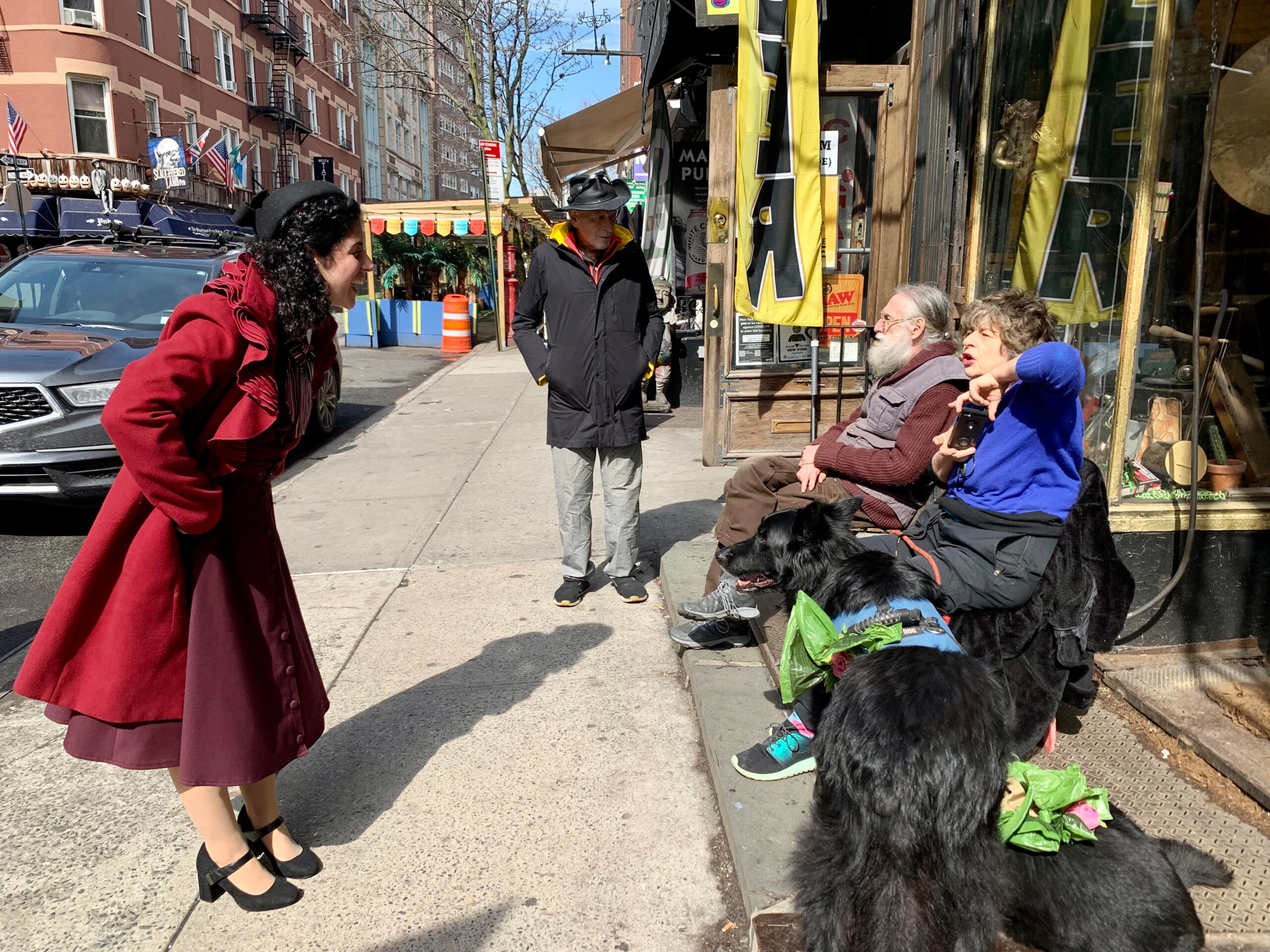 Jeff Slatnick, owner of the Music Inn (with beard), can frequently be found sitting outside his record and musical instruments store. He is a fan of “The Marvelous Mrs. Maisel,” which filmed a scene at the store. (Courtesy of Jackie Hajdenberg)

Other stops include the fictitious City Spoon diner (filmed at La Bonbonniere at 28 Eighth Ave.), where Midge and Joel grab a bite to eat after their wedding, and the famous arch at Washington Square Park, which serves as the backdrop for many TV shows and films. In the first season of “Maisel,” Midge walks into an anti-development protest at the arch, led by Jane Jacobs (Alison Smith) — a real-life activist who spent much of the 1950s and 1960s working to protect Greenwich Village from city planners Robert Moses’ ambitious development plans. In that episode, Midge grabs the mic at the protest, saying, “I stumbled upon this rally and I was like, ‘So many women in one place… two-for-one pantyhose?’”

The tour doesn’t include two of the show’s Jewish locations, including the East Midwood Jewish Center in Brooklyn, which makes a few appearances throughout the series as the interior of the family’s synagogue.

The show has also featured the iconic Stage Deli on 7th Avenue and 54th Street, where Midge and Susie (Alex Borstein) have their business meetings over pastrami sandwiches and pickles. Alas, the deli, which was founded in 1937 by Russian Jewish immigrant Max Asnas, closed in 2012.

According to our guide (and actor, naturally) Stephanie Windland — who was decked out in a 1950s-style coat, dress, hat and gloves — the tour isn’t just about the destinations; half the fun is the journey, too. She tells me her favorite part of the tour is the looks passengers get from pedestrians. “It makes people feel like celebrities,” she said of the attention-grabbing car.

Windland praised the show’s location scout dfor finding places that don’t need much work to look as they would have in the late 1950s. Caffe Reggio, for example, still has its original espresso machine, and the show used the cafe’s real dishes for the scenes that were filmed there.

“It feels like you’re back in time,” she said.

The cafe is also famous for its possession of Italian treasures. Inside, there’s an original Caravaggio painting and a bench from the Medici family palazzo in Florence that customers can actually sit on. 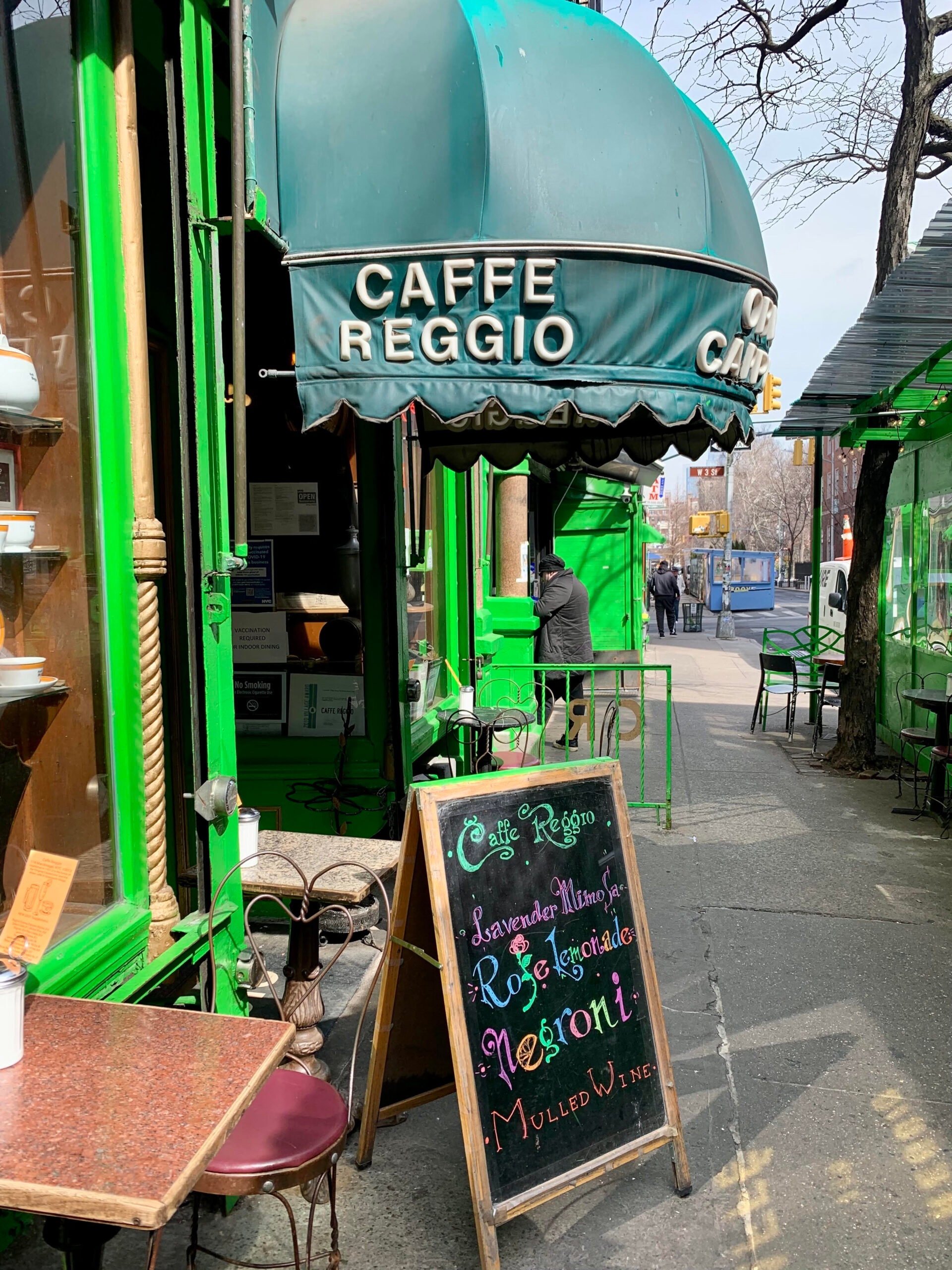 As Windland and I talked, I realized that her costume looked familiar. As it turns out, it’s the same one that Midge wears when she works at B. Altman — a real-life, now-defunct department store, founded by a Jewish man, that was once headquartered on Fifth Avenue and 34th Street.

Windland’s crimson dress and coat, which she and the other guides ordered from an Etsy store, are different colors than what Midge and the other employees wear.

“I can’t pull off silver like she does,” Windland said.

Windland also wears sensible “catering heels,” as she calls them, to stay comfortable on her feet as she leads up to three tours in a row.

But her gloves and hat? They’re from Amazon.