Can drones make NYC safer? An Israeli company and its Brooklyn partner pitch the idea to Mayor Adams 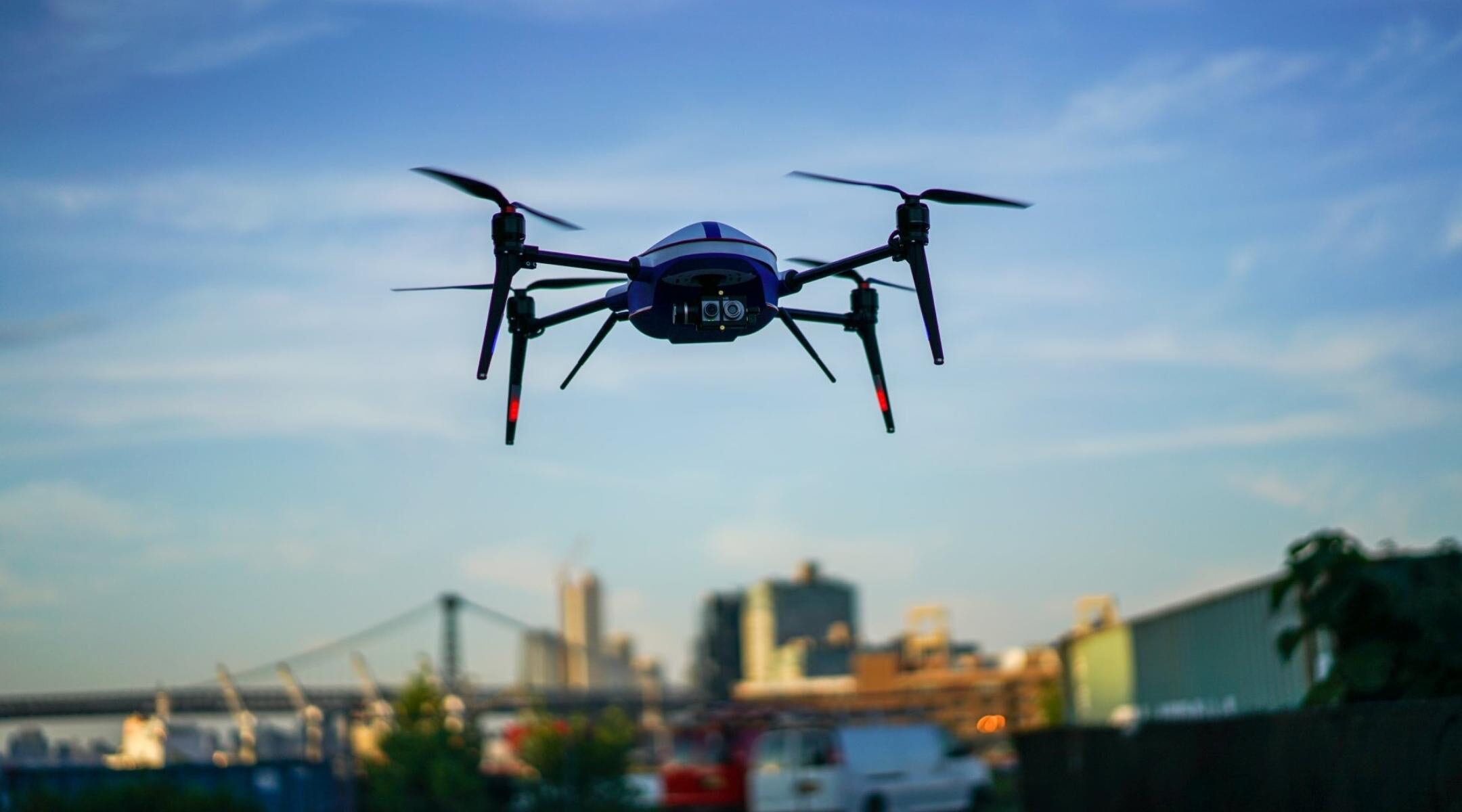 Israel’s Blue White Robotics and EasyAerial from Brooklyn were two of the companies featured in a recent “NY + Israel = Safer, Smarter Cities” event announcing the launch of the NYC-Israel Chamber of Commerce. Both companies said that Adams showed interest in their services at a reception for the event last Thursday at the Williamsburg Hotel.

BWR CEO Ben Alfi said that the best part of the event was the ability to have “direct discussion” with the mayor. “We talked about emerging needs to create and implement our capabilities in helping New York become a safe and secure city,” he told the New York Jewish Week. Easy Aerial CEO Ido Gur said that after the reception, they spoke with the mayor about placing drones on the rooftops in the city, “specifically in higher crime areas.”

“He came up to us after our presentation with this idea,” Gur said. “We discussed the applicability, which we hope to start implementing soon enough.”

The companies say their autonomous drones are already being used by the U.S. Customs and Border Protection at the Mexican border, as well as by and Israeli Defense Force along the border at the Gaza Strip in Israel. They said they had six contracts with the U.S. Air Force for their drones.

The drones, they said, were recently used by the IDF and Israeli police to search for people trapped inside of Tel Aviv buildings hit by rockets in May.

Alfi said they are calling the plans for New York the Soteria Project, from a Greek word meaning “deliverance from a crisis.” Their goal is to put “an eye in the sky in zero time” to enhance security across New York.

A spokesperson for City Hall declined to comment for this article. 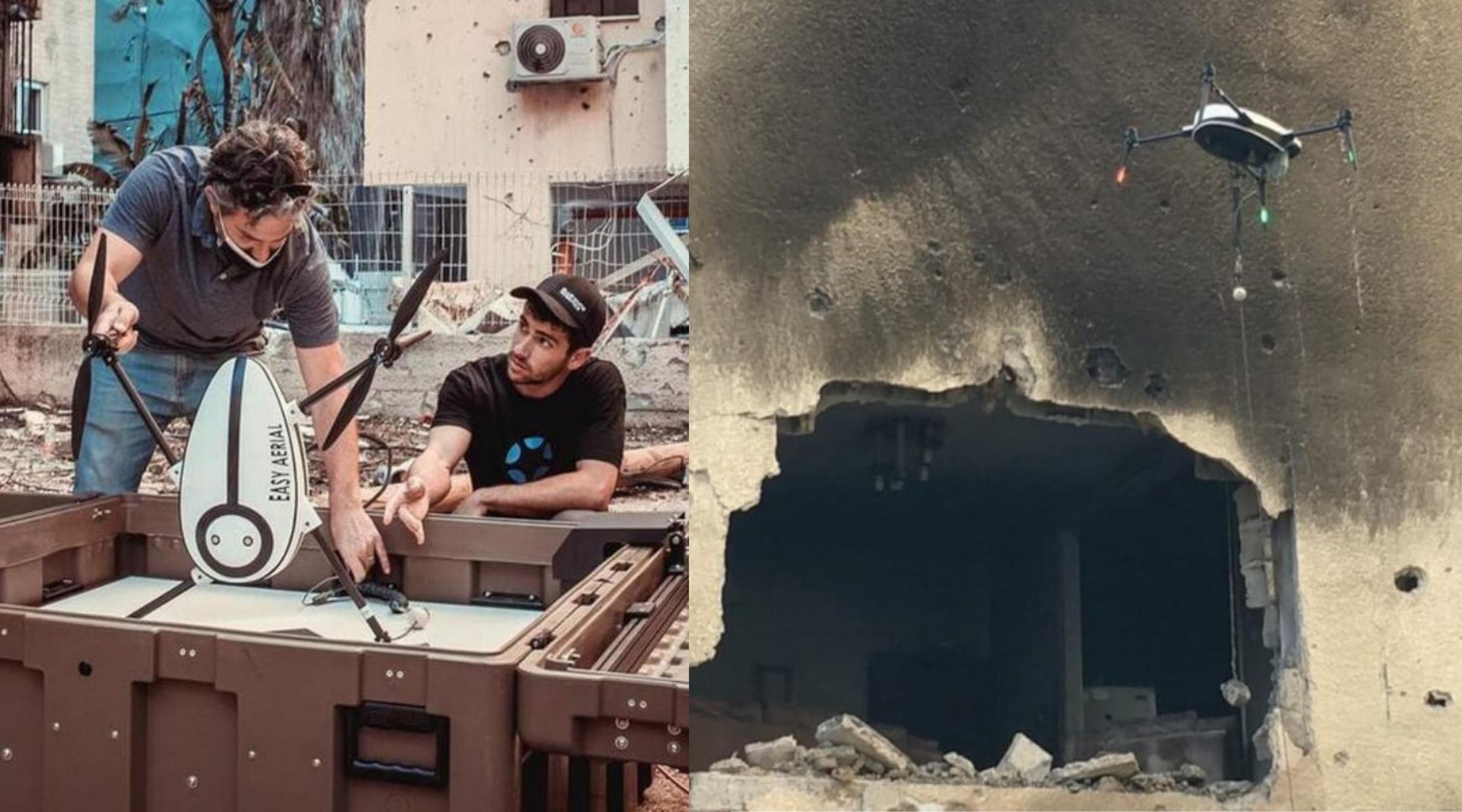 Easy Aerial and Blue White Robotics Drones were used to assist in Tel Aviv after rocket fire hit buildings in the city. (Facebook)

With crime rates spiking — including a 400% increase in antisemitic hate crimes in February over the same month in 2021 — Alfi said these drones can help fix these issues and improve public safety in New York. “This is the exact solution that is needed for the city,” Alfi said. “I’m sure that many cities will follow it after that.”

Privacy and progressive groups, however, warn that drones increase the likelihood of police overreach and civil liberties infractions.

Albert Fox Cahn, founder and executive director of the Surveillance Technology Oversight Project, said the NYPD has a history of “systematically targeting New Yorkers who are exercising their First Amendment rights, and that drones will be a powerful tool if put in the wrong hands.”

He added that the NYPD is already using manual drones to track large protests and other large gatherings, including the annual Pride Parade as well as recent Black Lives Matter protests. “At a moment when agency budgets are being slashed across the city, we don’t need to waste more money on high-tech toys for the NYPD,” said Cahn, practitioner-in-residence at N.Y.U Law School’s Information Law Institute. 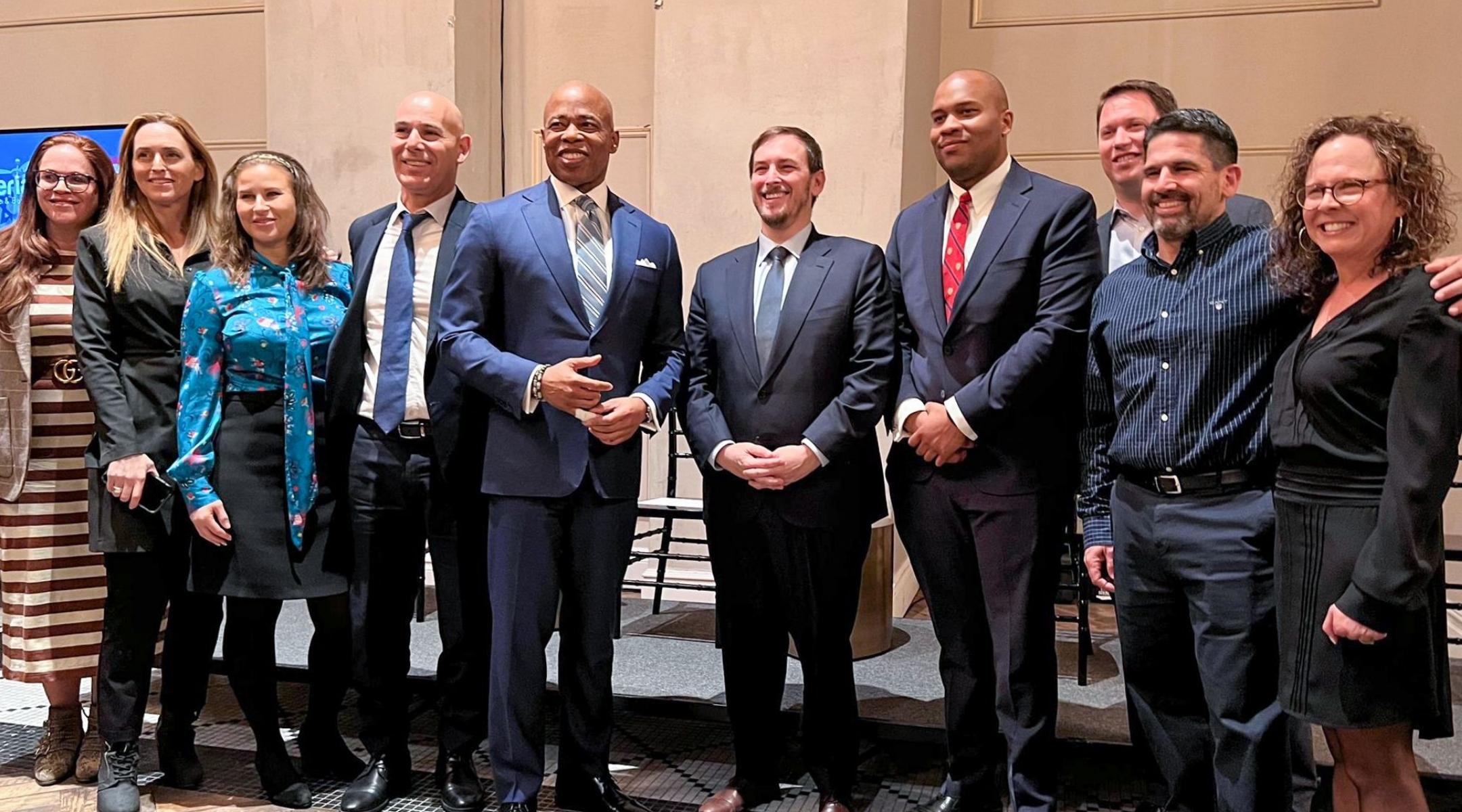 Gur said Easy Aerial held demonstrations for the FDNY at their offices in Brooklyn this week, and they have talked with the NYPD about doing a demonstration for them in the coming weeks. The NYPD declined to comment on this.

“The NYPD have been using manually flown drones for the last few years,” Gur said. “This is different. There is no need for someone to come and fly the drone.” He said the drones will take off by themselves, fly the entire mission, come back on their own and recharge themselves in a portable box that can be placed anywhere.

“It’s like a Roomba, that vacuum that cleans your house when you are not there,” Gur said. “It’s the same idea with our drones. They will do the entire mission without anyone being on site.”

He said the idea came from when he and Alfi were in the Israeli Air Force together and had to do guard duty. “I always thought that this is not really the best way to do perimeter security,” Gur said. “Our system can identify people, cars, objects, so that the guard only needs to look at the video if something happens.” 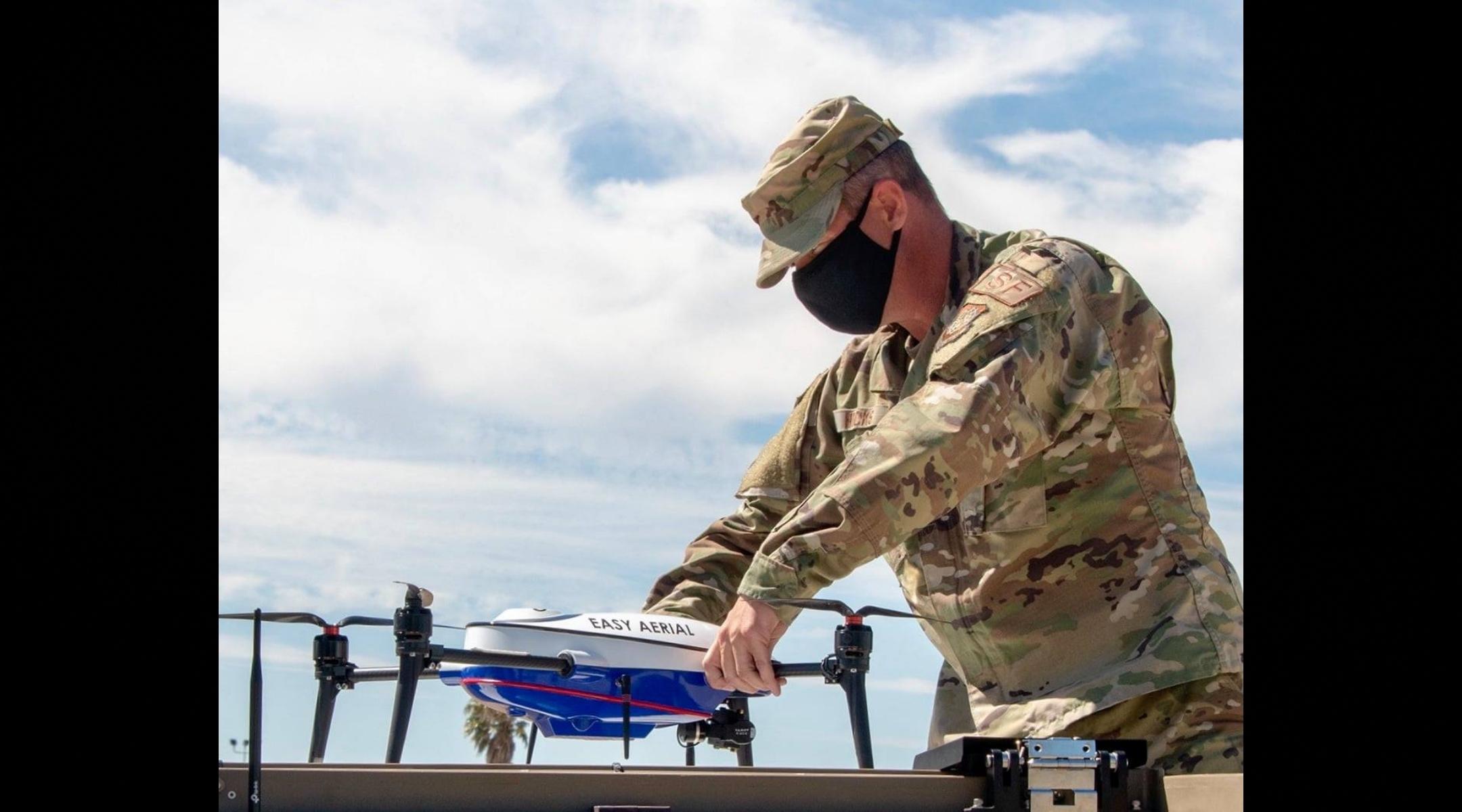 Easy Aerial and Blue White Robotics drones are already being used in the US Air Force. (Facebook)

Alfi said that there are many cameras in the city already, and both companies work to keep in mind the relationship between privacy and security. “The information is always secure,” he said. “Slowly and surely, we’ll see more drones, and we’ll get used to it like it’s an iPhone, while making sure privacy is met along the way. It’s already here.”

The NYC-Israel Chamber of Commerce is a partnership between the City of New York and the Israeli Ministry of Commerce with hopes of promoting business ties between companies here and in Israel.

Easy Aerial and Blue White Robotics each received funding by The BIRD Foundation, ​​a bilateral program between US and Israeli governments that provides up to $1 million in matching funding for joint research and development projects between American and Israeli companies.

Andrea Yonah, the east coast director of business development for The BIRD Foundation, said the mayor seemed “very enthusiastic” about partnerships between New York and Israeli companies. “He certainly seems to understand that Israel is a source of innovation and technology,” Yonah said. “As mayor, he may want to leverage that on behalf of the people of New York.”

Adams spoke to Mako News at the event and detailed the importance of both Israel and New York working together. “When we have the opportunity to build a relationship between Israel and New York, we’re going to be able to use the synergy to create products that will help mankind,” he said.

Adams spoke about using drones for business inspections at a press conference in 2019, and has repeatedly called for the use of more technology in the NYPD, including facial recognition.

The event at in Williamsburg was meant to show off the strength of Israeli companies and technologies, which include more than 100 Israeli start-ups in New York. Easy Aerial, an American company, was founded in 2016 and began working with Blue White Robotics in 2018, which was founded in 2017 in Israel.

Gur said this is a “win-win” for the city because Israel brings out the best in both places. “We bring technology from Israel, and we create jobs here in New York,” he said. “New Yorkers can benefit from that technology, either from safety, or medicine, or agriculture and many other avenues.”