How a conversion split — and then strengthened — Kenya’s Jewish community 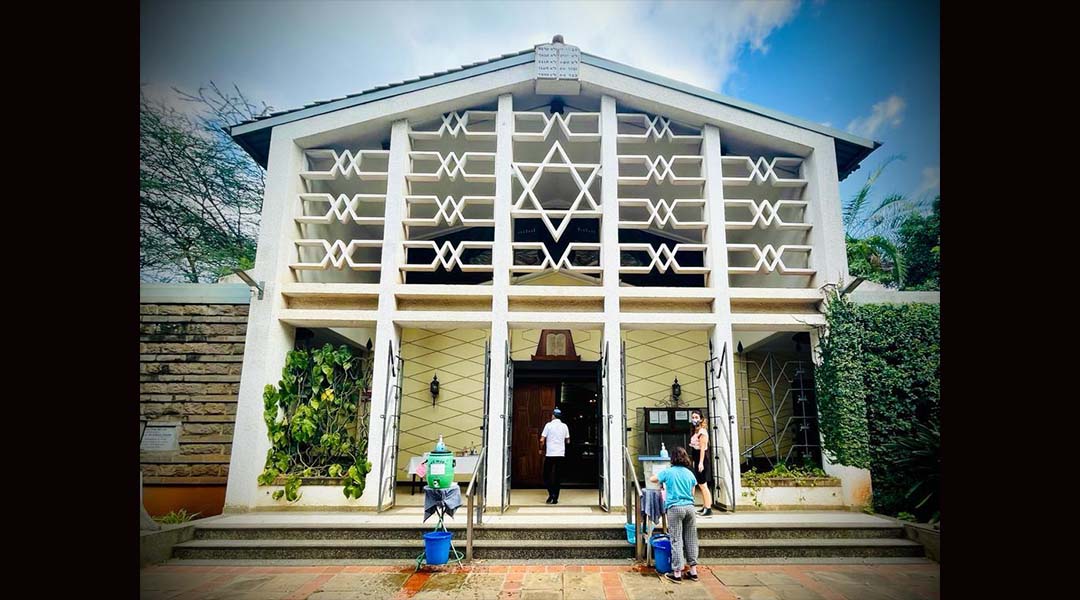 A view of the Nairobi synagogue, the only Jewish house of worship in Kenya. (Cara Tabachnick)
Advertisement

NAIROBI, Kenya (JTA) — In 1990, Florence Wangiju showed up at the door of the Israeli embassy in Nairobi. Arms folded across her chest, Wangiju, who was called Wanjuki, resolutely told the staff she wanted to go to a synagogue, to see how Jews worshipped.

“She just knocked on that door. She didn’t know anyone,” recalled her daughter Winnie Wangu. “My mother was a woman who wouldn’t take no for an answer.”

A single mother, for years she brought home storybooks and newspapers to her four young children who devoured information. Through her work as a secretary with different international organizations, she met different people who encouraged her to buy books for her children. Some of the books were about Judaism, and some of the people who brought the books were Jewish, said Wangu, now 53. Her children’s curiosity in the religion grew, and Wangiju decided she needed to see in person what her family dreamed about.

Embassy officials directed Wangiju to the Nairobi Synagogue, East Africa’s first and only current Jewish place of worship. Once she stepped into it, her soul never left, her daughter said.

“Our souls were at peace, we were finally home,” Wangu said, her eyes tearing at the memory. “But we didn’t know it would divide the community.” 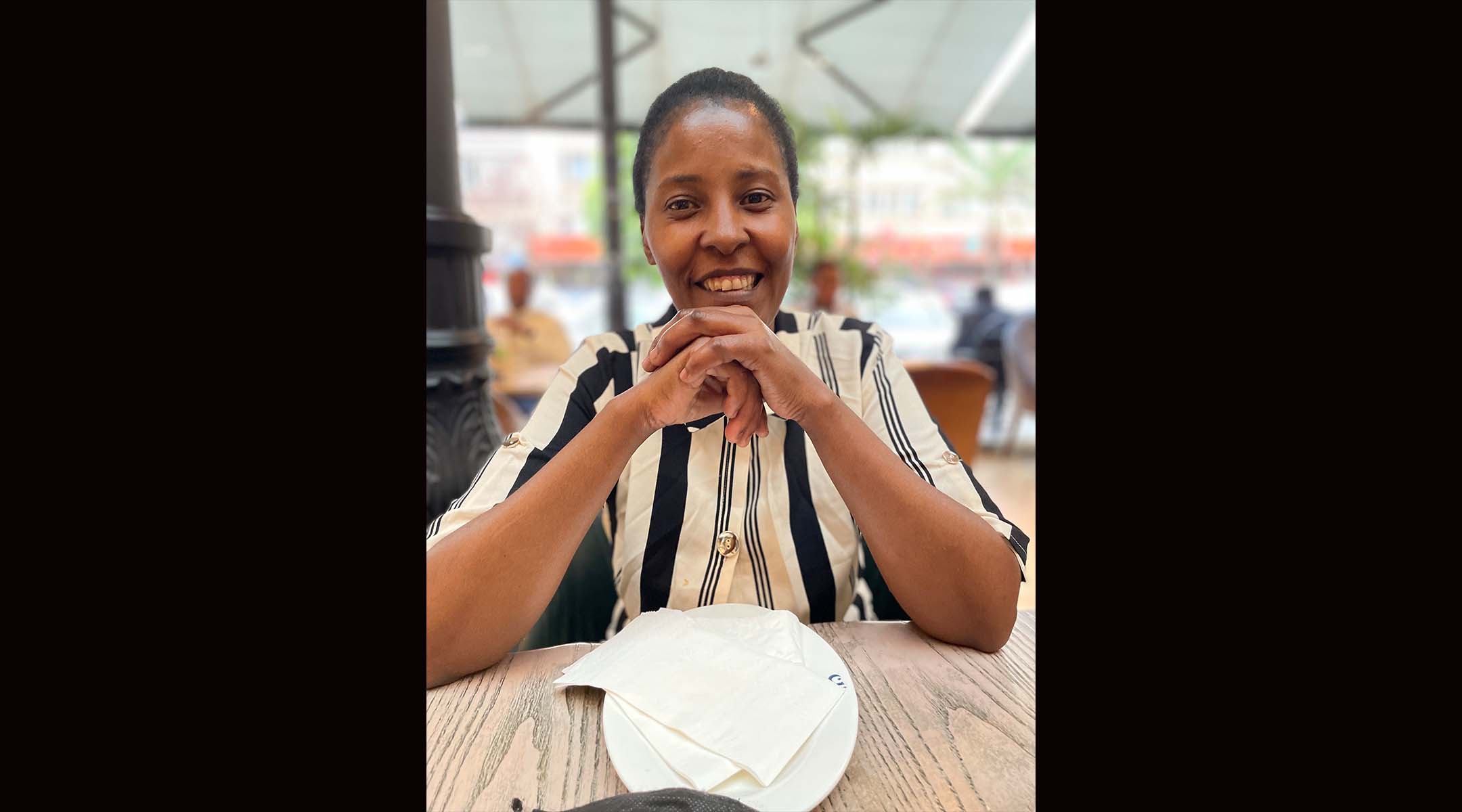 Winnie Wangu, a member of the Nairobi Synagogue, converted to Judaism in 2016. (Cara Tabachnick)

As the only synagogue in Kenya, the congregation was plagued by the numbers problem affecting many Jewish communities in sub-Saharan African countries (excluding Ethiopia, Uganda and South Africa). In Kenya there are about 300 Jews, and about half of them have ties with the synagogue. Members of the small community consisting of about 80 families often didn’t have enough men to form a minyan — a quorum of 10 required for prayer under Jewish law — in their synagogue, which opened its doors in 1912 to serve the smattering of European Jews who passed through Kenya for business and professional matters. They didn’t have a permanent rabbi either, until last year.

But the community, which contained several white Europeans and other non-native Kenyans, struggled with the decision to open their doors to Wangiju’s conversion request.

The congregation didn’t have the knowledge to perform the rituals and were concerned about the religious and ethical implications. The synagogue’s original constitution stated that any conversions must be Orthodox to be accepted. In missionary-heavy Kenya, which boasts numerous churches in every neighborhood, Jews are also cautious about proselytizing.

“It was just not possible for us to do it here,” said David Silverstein, an American cardiologist — and doctor to former Kenyan President Daniel arap Moi — who has lived in Kenya since 1974 and often acted as the head of the Jewish community.

So Wangiju, her family and the small group of others who followed her footsteps and also hoped to convert, decided to head to neighboring Uganda, home to the Abayudaya Jewish community led by Rabbi Gershom Sizomu.

The Abayudaya community, which saw its own size increase in recent decades with the help of conversions overseen by American Conservative rabbis, has run into the kinds of obstacles the Nairobi community was afraid of: in late 2017, an Abayudaya member was detained at Ben-Gurion airport and sent home, despite obtaining permission to study at a Conservative yeshiva. Israel has faced repeated criticism for its handling of immigrants from Africa and its treatment of non-Orthodox converts.

Over 20 years after stepping into the Israeli embassy, Wangiju converted in 2012. Wangu, her twin brother Rickson, 53, and sister, Malka, 55, converted on June 3, 2016, and returned to Kenya, where they met a divided community. 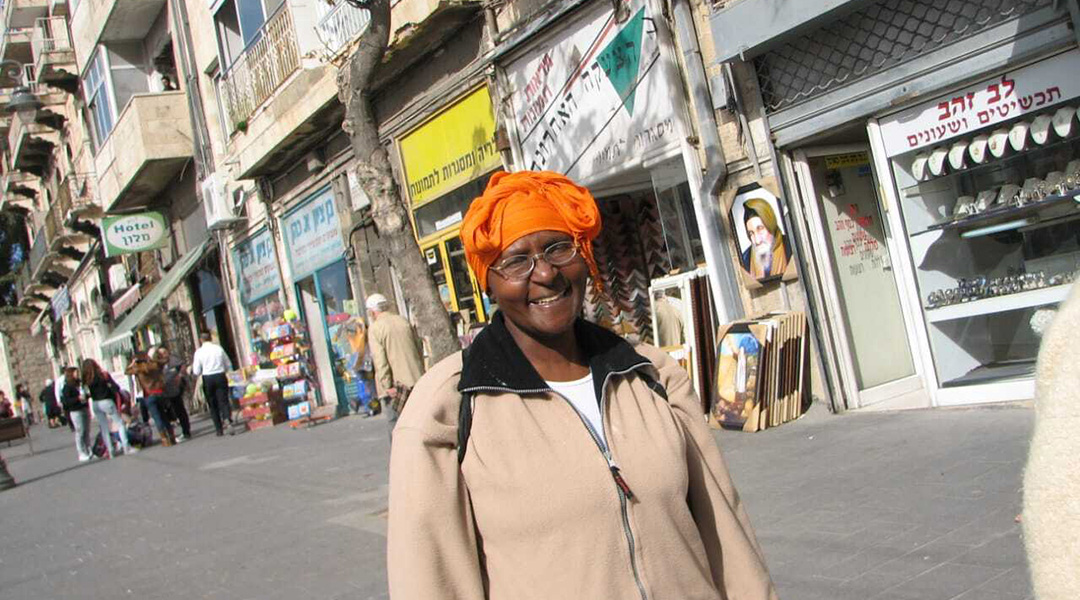 Florence Wangiju poses for a photo on the street during a trip to Israel. (Courtesy of Winnie Wangu)

But eventually community members concluded that accepting the converts was one of the only ways to keep the synagogue vibrant and open.

“Realistically the community was going to be dead soon. We couldn’t even have a minyan,” said Silverstein. “If we wanted to have a continuing Jewish community in Kenya we had to accept the fact that every Jew is not going to have a white Ashkenazi background.”

Many members of the congregation didn’t agree at first, and many began to leave the community, dismayed by the acceptance of Wangiju and her children. At first, congregants didn’t want to accept the conversion because it was done in Uganda not Israel. Silverstein said arguments over whether the new converts should be called to the bimah, or synagogue platform, to lead prayer became hostile.

“There was a small group of holdouts that didn’t want the Kenyans to be accepted to pray,” said Silverstein. They would talk behind his back, he said, and not confront him in person because of his standing in the community.

Race was an unspoken factor — Silverstein had two half-Kenyan sons who had converted to Judaism in the United States and were easily accepted into the community.

“I questioned why they would accept my children easily but not the new Kenyan converts,” said Silverstein.

The congregation refused to call Winnie’s brother, Rickson, to be part of a minyan.

“We would come to pray, but they would pass over my brother to join the minyan although he was sitting right there,” said Wangu.

Some members wanted an Israeli authority to certify the conversions. The synagogue’s governing council stated that they had their own rules and regulations and did not need permission from Israel to accept the conversions. Eventually Silverstein decided to write to a rabbinical group in Israel, who decreed that the conversions should be accepted.

“After that, for the most part in the end, they eventually backed down,” Silverstein said. Regular attendees began to accept the converts. The conversions continued, and Wangiju’s extended family, including three of her children, and two grandchildren converted to Judaism, along with three other Kenyan families, making up a significant portion of the congregation.

In total there are now about 20 converted Kenyans — more than a third of the congregants — that attend the synagogue regularly.

As the years passed, tensions eventually began to thaw, and eventually the congregation called Rickson to the bimah. In 2018, the synagogue hosted its first bar mitzvah for a mixed Kenyan and European family, and everyone was invited.

“For the first time in almost 20 years, children were at the shul, and Black and white families prayed together,” Wangu said.

By then the group had become large enough to bring in a rabbi, Netanel Kaszovitz, 28, and his young family from Israel, last March, through synagogue membership fees, donations, money earned from kosher certification services and fundraiser events. Kaszovitz, an Orthodox Jew from Gush Etzion, and his wife, Avital, studied in the Straus-Amiel program, which trains rabbis to strengthen Jewish identity and participation in the diaspora (and no affiliation with the Chabad-Lubavitch movement, which sends emissaries around the world with a similar mission). 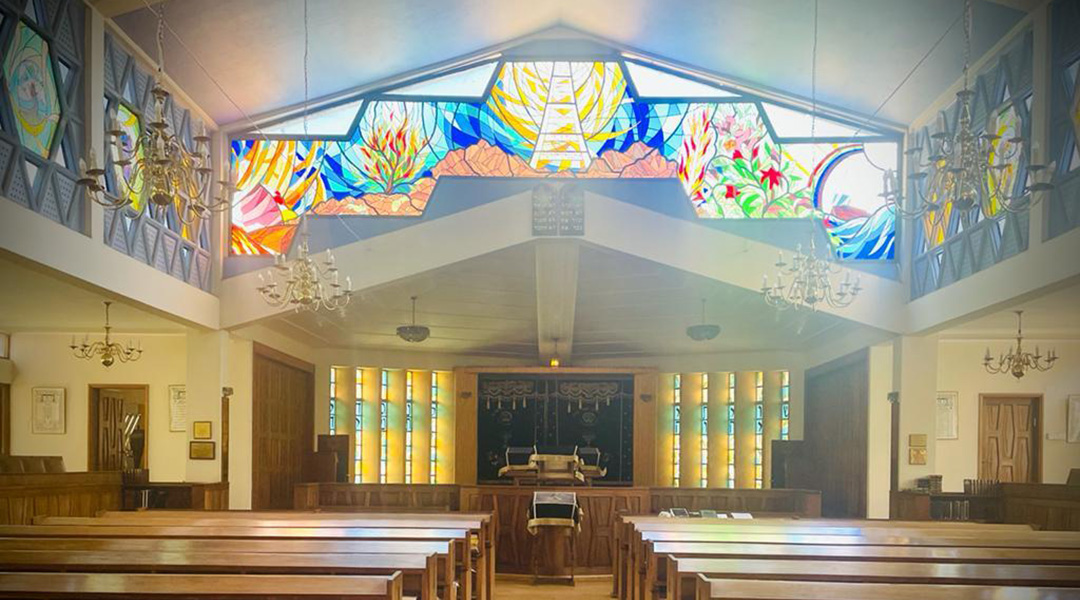 A view inside the Nairobi synagogue. (Cara Tabachnick)

“Our emissaries are specially trained to empower the building of personal and educational relationships to inspire passion and lasting love for Israel and Judaism, while also combating assimilation and alienation,” said Rabbi Kenneth Brander, president of the umbrella organization Ohr Torah Stone, which runs the training program, in a written statement to the Jewish Telegraphic Agency.

The Kaszovitzes were open to the challenges of working in Africa, as they had previously hosted Shabbats in Thailand and the Philippines, and they appreciated the uniqueness of being Jewish in Kenya. In a country where 85% of the population were practicing Christians and 11% are Muslims most had never met a person of the Jewish faith.

“Who ends up in Africa?” Kaszovitz said, “What brings people here? And how do we keep the Jewish faith alive?”

Within the year since his arrival, the new rabbi instituted new religious study classes for congregants, the first-ever courses in the synagogue’s history. He said wanted to bring the community closer together but ensure congregants were adhering to Jewish laws.

Wangu said the community now has a deeper understanding of how to practice their Judaism.

“He treats us as Jews, he’s healed the community and brought us together,” Wangu said, referencing the former racial and conversion divides. “Many people come with promises, but this is the first rabbi that’s kept them. And because of that, we have the courage to be better Jews.”

Attendance at the synagogue has grown. On Shabbat they easily form a minyan, and congregants are able to read portions of the Torah and prayers they had not previously known.

Wangiju never got to see the changes that she was the catalyst for all those years ago when she knocked on the door of the Israeli embassy, as she died in 2017 at 68. But she would have been proud, her children said, that no matter how many years it took to gain acceptance, they eventually did.

Wangiju was buried in the Jewish cemetery in Nairobi and Jews from across Africa and the world attended the funeral, said Wangu. Congregation members helped them sit shiva.

“We weren’t born Jews,” Wangu said. “But we know we will die as Jews.”