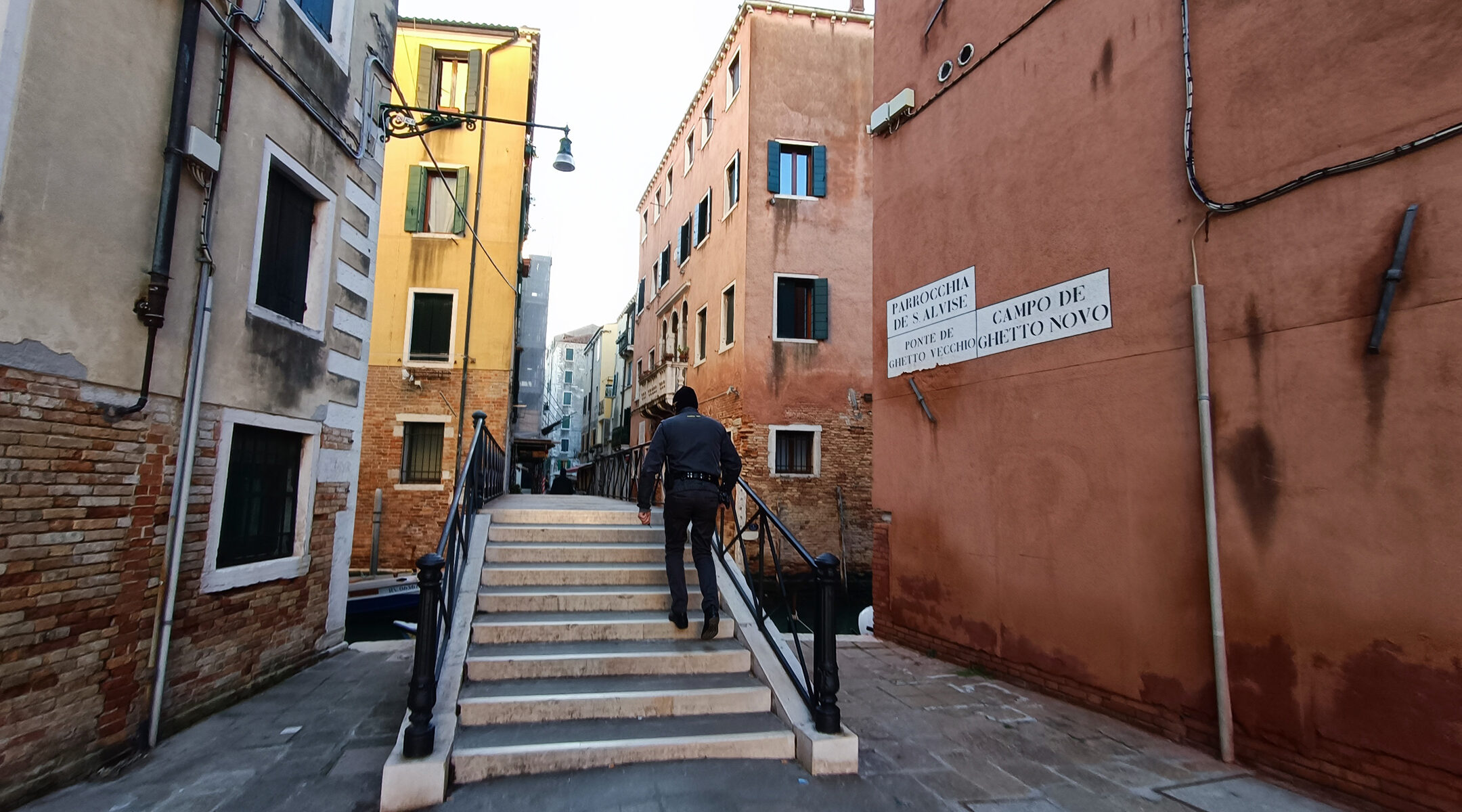 A guard climbs stairs by the entrance to the Campo di Ghetto Nuovo, or former Jewish Ghetto, in Venice. (Orge Castellano)
Advertisement

VENICE (JTA) — Through a narrow, fraying sottoportico, or Venetian alleyway, and across a wooden footbridge, there is a wide square enclosed by rows of multicolored buildings.

Stepping into Venice’s Jewish Ghetto feels a bit like traveling back in time. On March 29, 1516, the Venetian Senate gated the city’s Jews here near a cannon factory, in one of the earliest examples of forced religious segregation.

In contrast to their Muslim, Greek Orthodox, and Christian neighbors, Venetian Jews were allowed to freely practice their religion as long as they remained inside the Ghetto, paid their taxes and rents (higher than other citizens), and stuck to a few occupations: moneylenders, doctors, traders and rag sellers.

They endured, and over time the Ghetto, crammed into the space of an acre, became the vibrant Jewish cultural capital of Europe. Early printing presses produced religious and secular works in Hebrew, Ladino, and Yiddish within the Ghetto; the 1609 Venice Haggadah is one of the most famous examples of the book that guides the Passover seder.

Centuries later, much of the architecture is in a precarious state, and the local Jewish community is much smaller than it was. It’s taking action — small steps at first — to reverse those trends in the wake of the failure of other high-profile campaigns.

“The community’s population probably peaked around 1630 with about 5,000 Jews of German, Italian, French, and Sephardic descent. Before the Shoah, between 1500 and 1800, they lived here. Nowadays, we are approximately 450 Jews,” said Paolo Navarro, vice president of the Jewish Community of Venice organization. 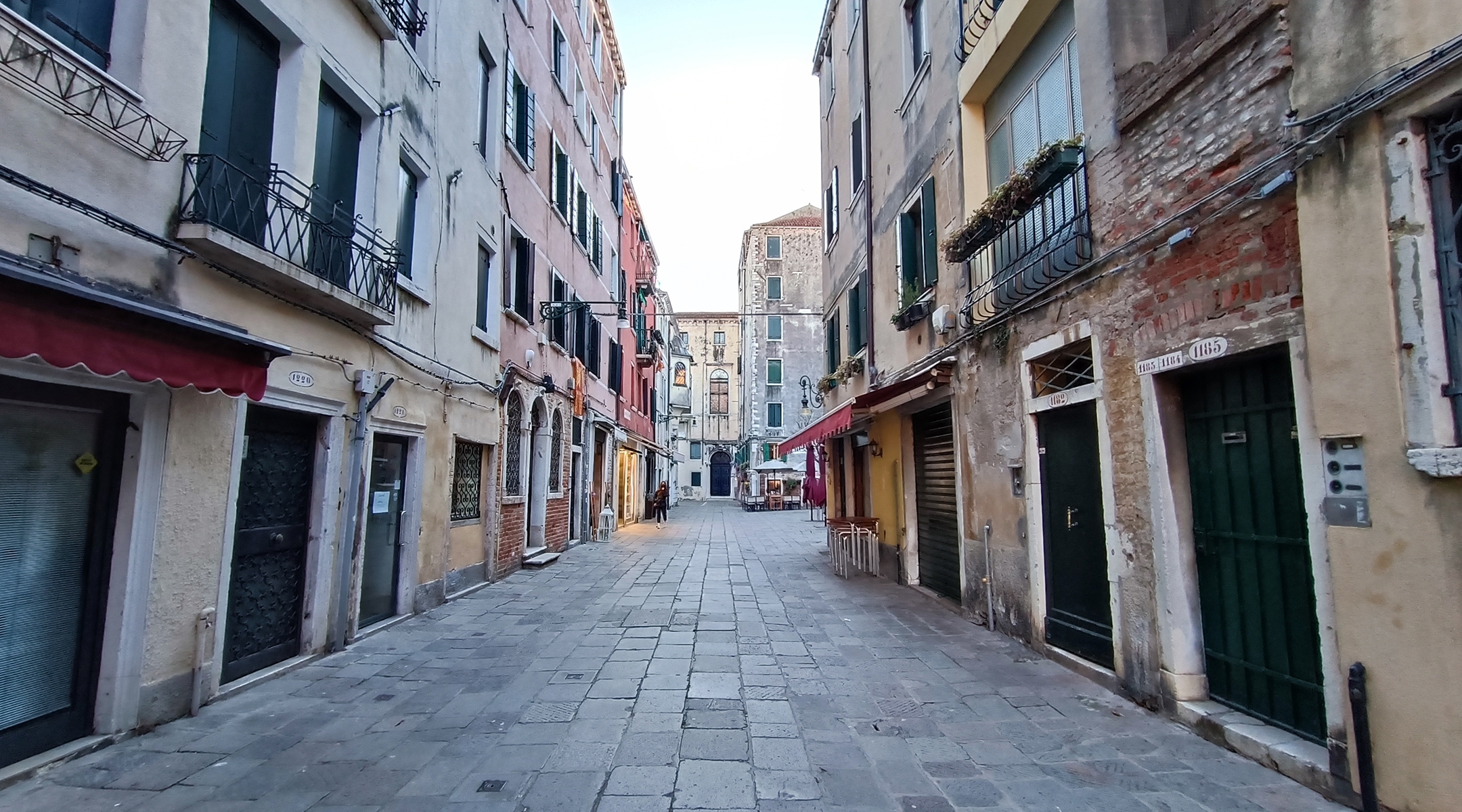 Only about 30 of those 450 still live in the Ghetto square, making up about a dozen households. In recent decades, tourism has been a double-edged sword: it sustains an economy but has caused a citywide exodus of local Jews and non-Jews who find daily tasks, like shopping and errands, difficult in a city that receives tens of millions of tourists each year.

“It’s a social issue that affects everyone, not just the Jewish community,” Navarro said.

The buildings, which were wedged too closely together from the start, needed a long-overdue renovation to stay standing, especially as the city’s water levels continue to rise due to climate change. In 2014, looking forward to the 500th anniversary of the Ghetto’s creation in 2016, a group of philanthropists called the Venetian Heritage Council, led by the famed Jewish fashion designer Diane von Fürstenberg, announced a $12 million project to restore the ghetto. But the project fell through when the group couldn’t raise enough funds to begin the restoration.

That’s when the Jewish Community of Venice, a group that now owns much of the Ghetto’s real estate, decided to take the challenge into their own hands. First they renovated the Ghetto’s kosher bed and breakfast, the Giardino Dei Melograni, Garden of Pomegranates. This year they’re renovating the kosher restaurant next door, the Gimmel Garden, which has been closed for years, and the small-but-historic Jewish Museum, which catalogs Venetian Jewish history. Both buildings are scheduled to reopen this summer.

They hope the renovations will lure some new families into living in the confines of the Ghetto; the Community group owns enough housing to offer some to the families of new workers at the museum and other institutions undergoing renovation. From there, the Community dreams of a broader revitalization of religious Jewish life throughout Venice. In 2019, they hired a new chief rabbi, Daniel Touitou, from France, who in the 1990s was the deputy rabbi of Turin.

It’s an uphill battle — in addition to the waves of tourists, most Venetian Jews are disengaged from communal life these days, said Touitou, who is Orthodox.

“People, unfortunately, are not interested in living Jewishly,” he said. “The past is significant, but it cannot withstand the risk of assimilation in the absence of practice. Many Venetian Jews are losing interest in their identity.”

Thanks to the COVID pandemic, the Ghetto has been significantly quieter since 2020, its narrow streets not as congested. But its Jewish artistic and cultural heritage still permeates the walls of the decaying apartment buildings.

A tour of the Venetian Ghetto begins at the ornate Bridge of the Spires, made of brick and white stone, in the city’s northwest corner. Then, along the Cannaregio canal, past tourists sipping coffee at cafes, an unassuming dark tunnel leads to the Jewish district.

Immediately upon entering, the first thing visitors notice are the aromas emanating from Gam Gam, a kosher restaurant managed by the Hasidic Chabad-Lubavitch movement. The eatery features a menu of traditional Venetian, Israeli and Ashkenazi Jewish flavors, serving everything from sarde in saor — pickled sardines with onions, raisins, pine nuts — to deep-fried artichokes with lamb to holiday staples such as gefilte fish and latkes with applesauce. 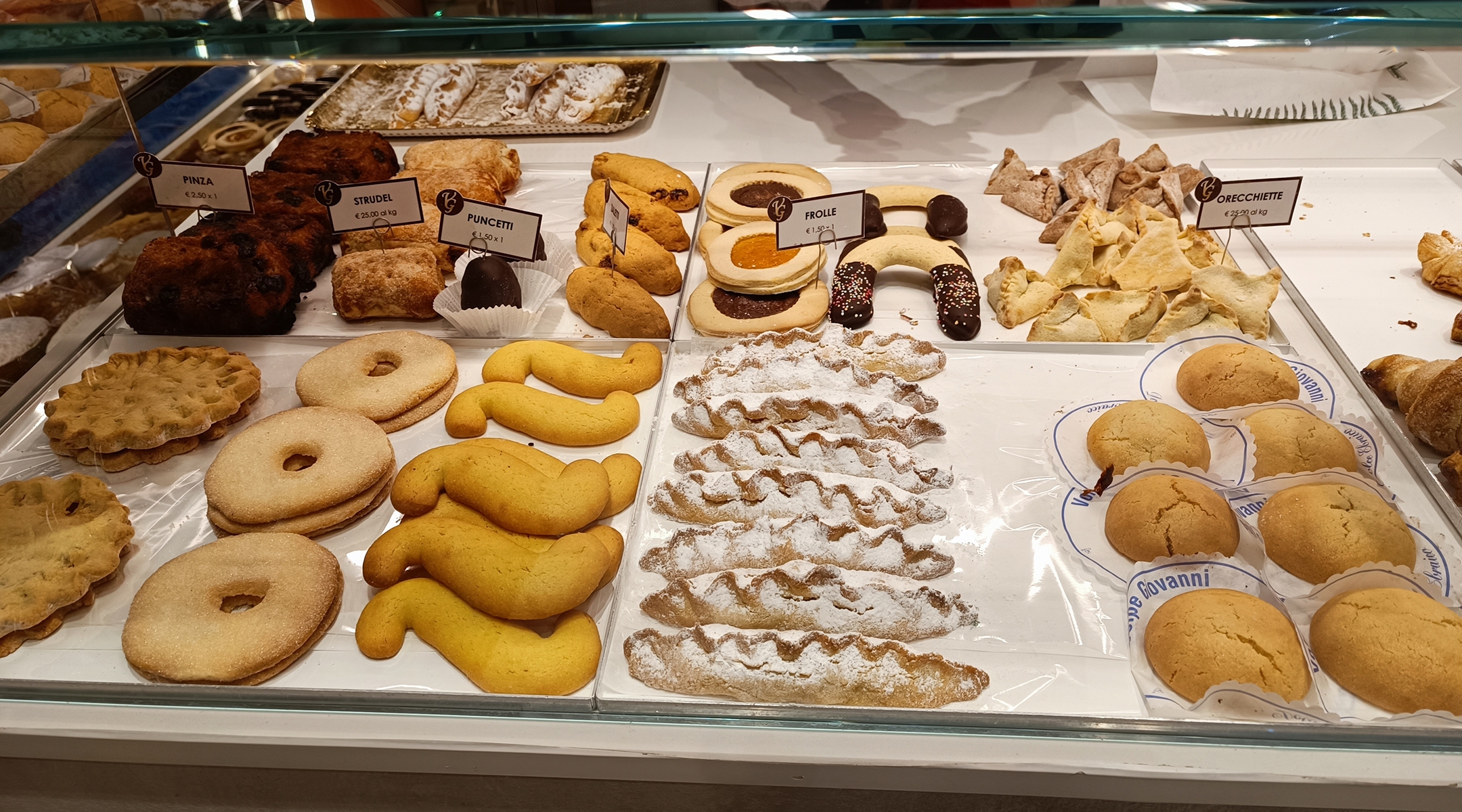 A little further along the tiny alley, a sign in front of a square store announces its main specialty: Dolci Ebraici, or Jewish sweets. Giovanni Volpe’s store is the quarter’s most sought-after Jewish bakery. It’s not uncommon seeing someone outside nibbling on an impade pastry, reminiscent of other Sephardic ones stuffed with almond cream filling, or a piece of unleavened, citrusy bise — a small cookie in an “S” shape, a traditional Passover delicacy.

At the end of the lane, the Ghetto opens up into the square once inhabited by Levantine Jews, Sephardim predominantly from the Ottoman Empire. Hidden within ordinary-looking buildings in the square sit La Scola Spagnola (Spanish Synagogue) and La Scola Levantina (Levantine Synagogue), the last synagogues built in the quarter, in 1541 and 1580, respectively.

Coming from various regions of Europe, each Jewish group sought to retain its own traditions and community spirit inside the Ghetto. By 1571, there were five synagogues, each dedicated to a distinct ethnic group. 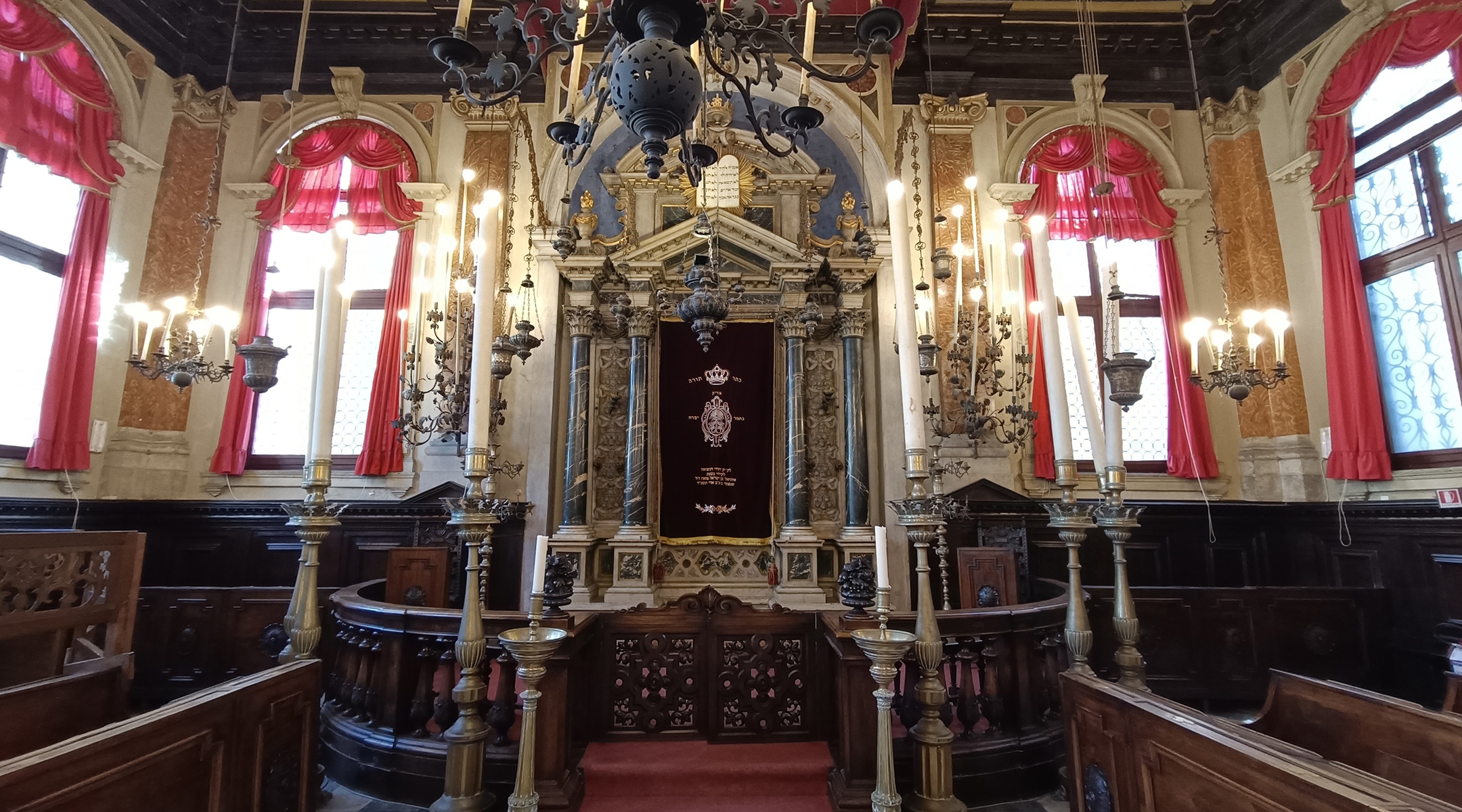 The Torah ark sits illuminated by chandeliers in the Scuola Grande Spagnola, or Spanish Synagogue, in Venice. (Orge Castellano)

The Spanish Synagogue is the only temple that has been continuously used since its founding. Said to be designed by the famous Venetian Baroque architect Baldassare Longhena, the temple resembles the style of many contemporary Venetian monuments and palazzos. Carved wooden doors inscribed with Psalm verses welcome congregants. The bimah, or prayer podium, features marble columns, and the floor is made up of white and gray marble tiles, arranged in a concentric square pattern.

The Schola Levantina, rebuilt in 1680, is an elegant building also attributed to Longhena. Dark wooden panels clad the square-plan prayer room, and the 18th-century bimah stands in a raised polygonal apse, covered by a domed skylight.

Of the remaining three temples in the Ghetto, La Scola Grande Tedesca (German Synagogue), erected by Ashkenazi Jews in 1528, is the oldest. The bimah and Torah ark sit opposite of one another, and the long walls house 16th-century benches that are adorned with lion claws and flower designs. A skylight ceiling floats above the Venetian terrazzo floor, adorned with mosaics of multicolored marble. The building it is in also houses the aforementioned Jewish Museum. 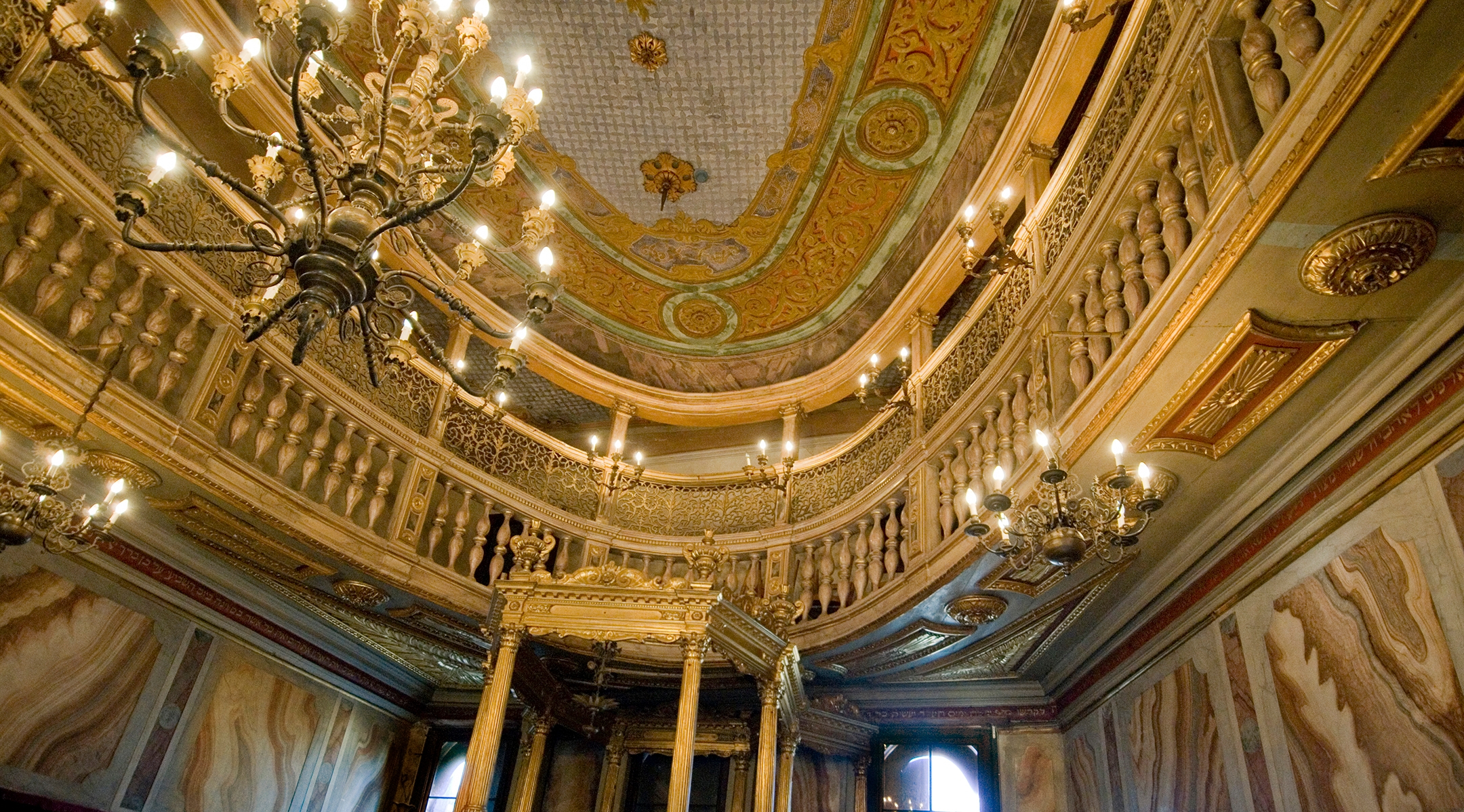 The German Synagogue of Venice’s Jewish quarter was erected in 1528. (Aldo Pavan/Getty Images)

The contemporary community migrates between the synagogues: they use the Levantine Synagogue in the winter months because it is heated, and the Spanish Synagogue in the summer since it stays cooler.

A thriving culture of Jewish artisans and craftspeople is still present along the Ghetto’s entangled streets. A few blocks away from the synagogues, the couple Michal Meron and Alon Baker run The Studio in Venice, a gallery and store showcasing a diverse collection of colorful art, from original paintings depicting Jewish holidays to prints celebrating the cats of Venice. 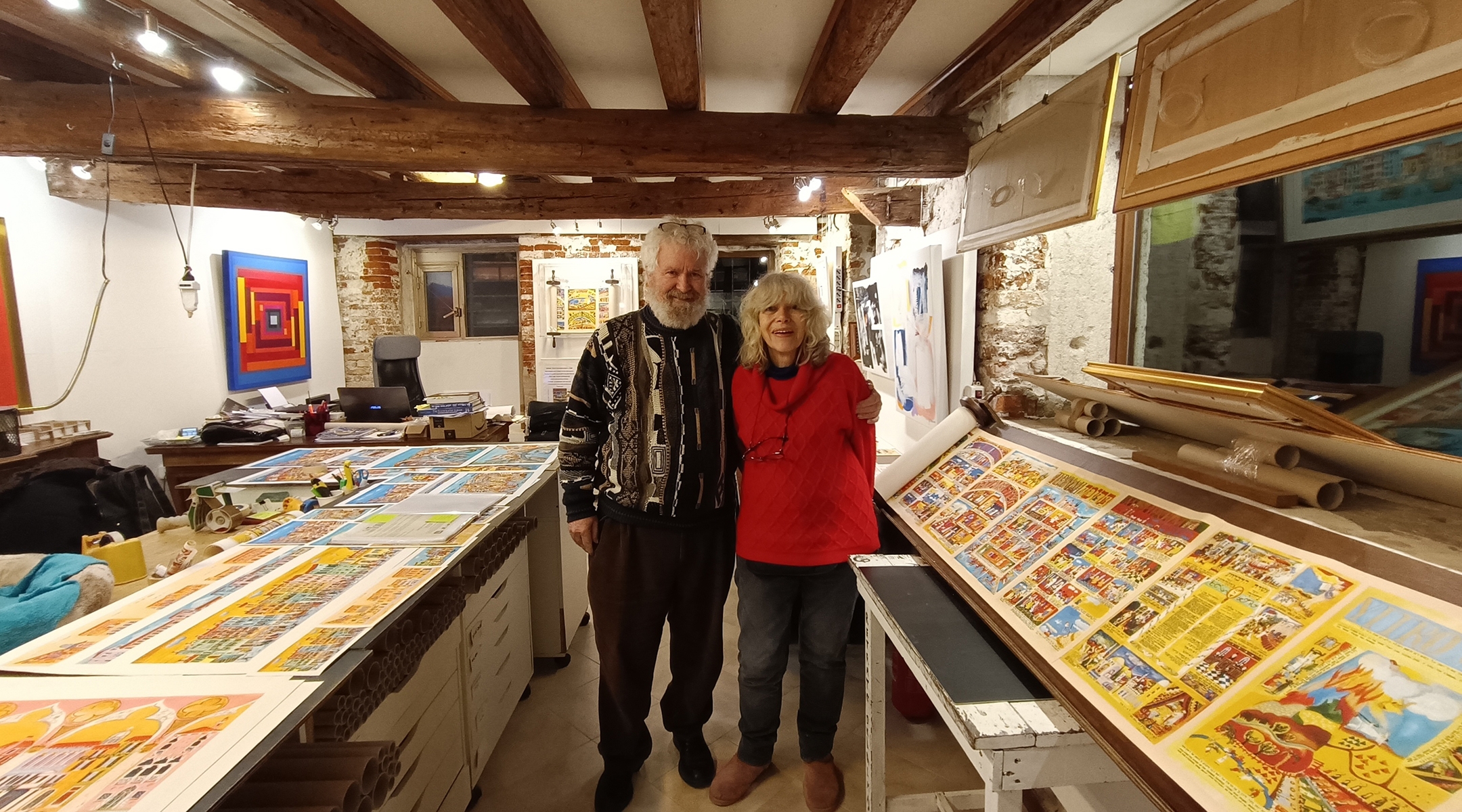 Their most popular creation is the Illustrated Torah Scrolls, which takes inspiration from all 54 weekly Torah portions and the Ten Commandments, painted on a single canvas scroll with wooden rollers. It took Michal, who is from Austria, four years to complete and is available in various print duplicate sizes.

“Congregations and yeshivas that purchased one primarily used it as a teaching tool for children,” said Baker, a native Italian from Trieste.

The couple, who previously lived in Haifa, also sell prints that utilize micrography, a Jewish calligraphic technique that uses minuscule Hebrew letters to construct documents, like a ketubah marriage contract, or artworks and designs. The Curiels arrived in Venice 500 years ago from Curiel del Duero, Spain, and have been making glass Judaica in the city’s famed Murano style ever since. Doriana, Davide’s sister, is the mastermind behind the meticulous creations.

By blowing glass in various colorful patterns and forms, the duo creates menorahs, shofars, mezuzahs, dreidels, kiddush cups and more using centennial glass techniques; their shop is only one of two that still make Judaica out of glass in Venice.

“My sister will be retiring in a few years. I’m 62 years old and have no children. When you work with glass, you create something remarkable and special. Once we’re stopped, the heritage and legacy behind our craft will be completely lost,” Davide said.