Did Emmanuel Macron use Yiddish in his presidential debate with Marine Le Pen? Some French Jews think so. 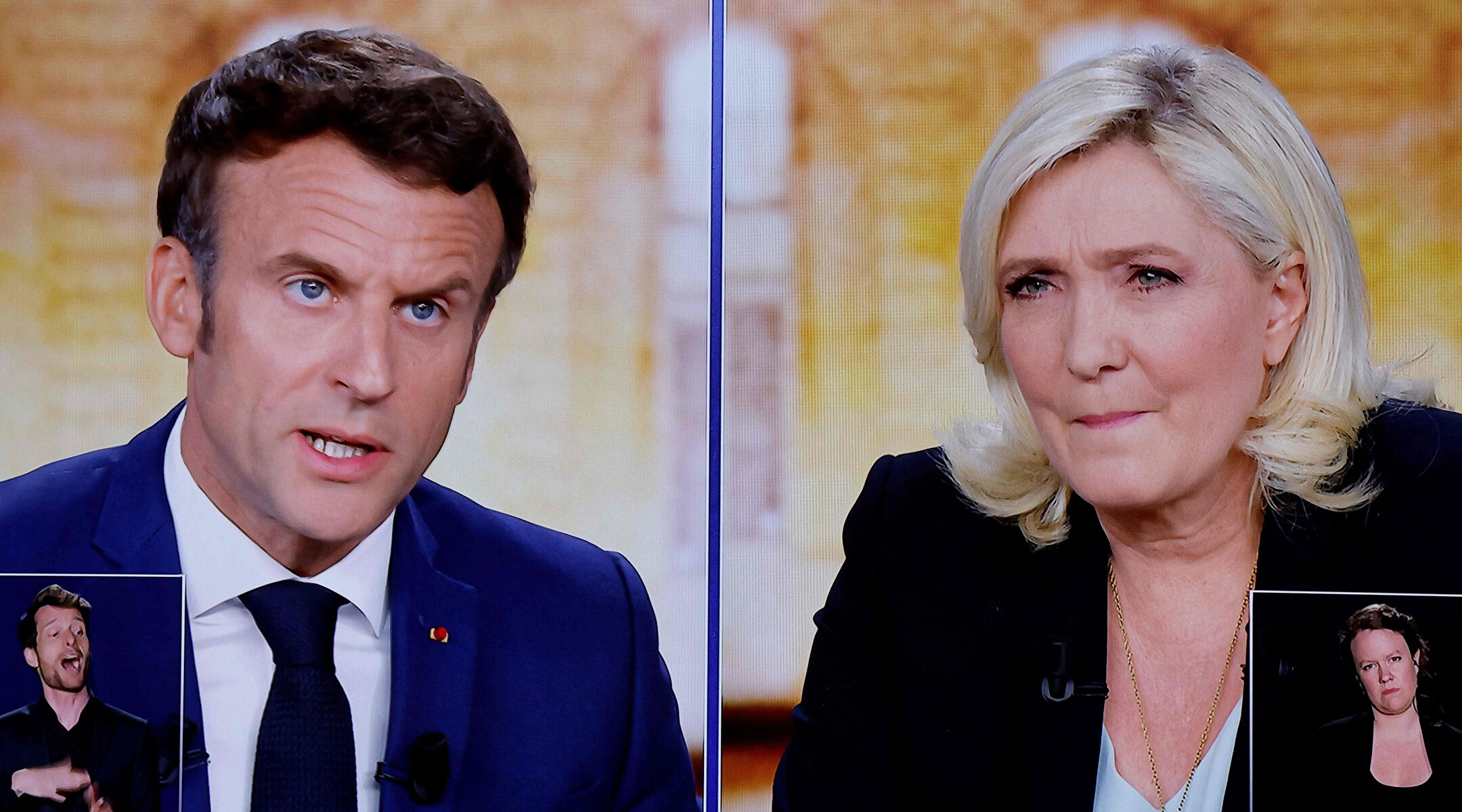 There was a short reference to kippahs by the incumbent, Emmanuel Macron, who promised not to limit the wearing of religious symbols in public spaces and warned that plans to do so by his rival, far-right leader Marine Le Pen, would start a “civil war.”

But Wednesday’s Presidential Grand Debate of 2022 was centered on the economy, with very little attention given to immigration, Islam and other societal themes that had eclipsed all others in previous campaigns. Unlike in previous years, the debate was also devoid of any references to antisemitism, neo-Nazism and the Israeli-Palestinian conflict.

However, in one memorable moment Macron uttered what sounded like a Yiddish-language interjection to berate Le Pen, the daughter of a Holocaust denier, for her alleged poor grasp of the economy.

Replying to her assertion that the national debt has risen by 600 billion euros under his watch, Macron raised one eyebrow and said what sounded like: “But that was social securities and local municipalities, Mrs. Le Pen. Oy, oy, oy. Really, stop mixing everything up, this is impossible!”

Jews in France and beyond immediately reacted.

It was “my favorite phrase from the entire debate,” tweeted Anne Rozenberg, the head of community management at the David Susskind Jewish Community Center of Brussels, Belgium. “No one told me that Macron is Ashkenazi!”

Noémie Issan-Benchimol, a Jewish studies scholar, wondered on Twitter whether someone had “inserted an oy oy oy from one of the songs of MBD,” a reference to the famed Hasidic singer Mordechai Ben David.

Their surprise is easily understood, according to Charles Yisroel Goldszlagier, a Yiddish teacher living in Paris.

While the Yiddishism “oy vey” is popular in English, neither it nor “oy oy oy” are heard frequently in French, Goldszlagier told the Jewish Telegraphic Agency.

The word “oye” appears to be more common, at least in eastern France, according to the Lexique Messin, a dictionary of the local dialect. This could be due to influence by Ashkenazi Jews from nearby Germany or an evolution of an old salutation in ancient French.

But in practice, the interjection “oye oye oye” is “not used in French at all,” Goldszlagier told JTA, and much less at a presidential debate.

A possible explanation, Goldszlagier said, is that Macron actually said “aïe, aïe, aïe,” which is a common interjection in French, expressing frustration. And that phrase is “as French as ‘oh la la,’” the Paris-based Rabbi Delphine Horvilleur told JTA.

But Macron, a measured and meticulous orator, does seem to have said “oy” instead of “aïe,” as multiple native speakers of French have noted.

If he indeed did, that could be because of his heavily-Jewish milieu.

Macron’s secretary-general, Alexis Kohler, speaks Hebrew. His industry and finance advisor – who likely worked with the president on preparing for the economic part of the debate – is named Alexis Zajdenweber and has Ashkenazi roots.

Macron is the undisputed favorite of French Jews in the upcoming elections. Many of them fear a Le Pen victory would lead to bans on the production of kosher and halal meat and the banning of wearing the kippah and head covers, among other effects of Le Pen’s declared policy of limiting the presence of Islam in French society.