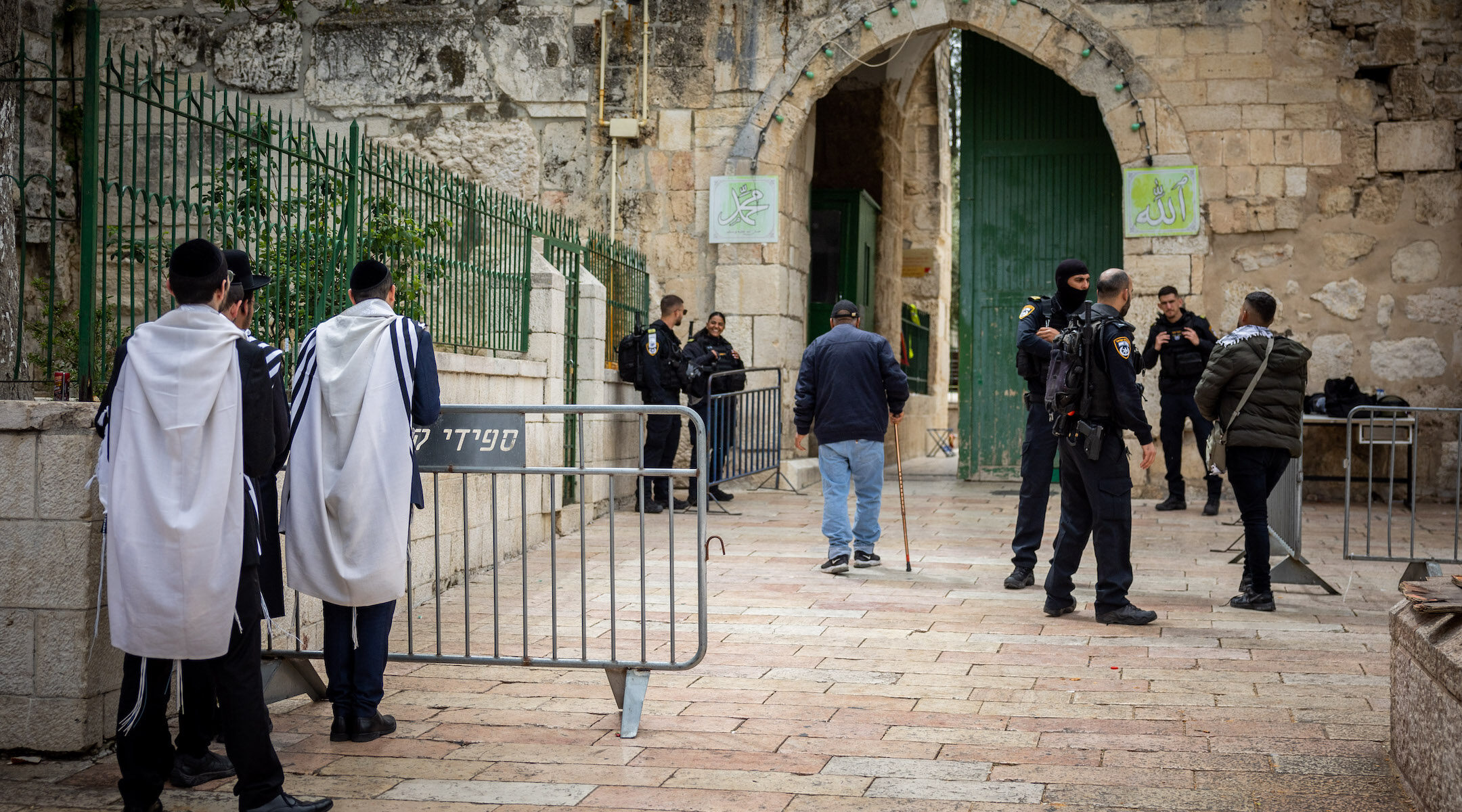 Jewish men pray near the entrance to the Al Aqsa Mosque at the Temple Mount complex in Jerusalem, April 19, 2022. (Yonatan Sindel/Flash90)
Advertisement

(JTA) — The Temple Mount is closed to Jewish visitors “until further notice,” the organization that coordinates visits by Jews said Saturday, after a fresh round of clashes between Israeli police and Muslim worshippers at the Jerusalem holy site’s Al-Aqsa Mosque.

The move was expected to last through Ramadan, but the Temple Mount Administration’s language suggests the ban could last longer, according to the Jerusalem Post. The Administration — separate from the Waqf, the Muslim authority that controls the site — is a joint steering committee of Jewish Temple Mount activists and Israeli police.

Holy to both Jews and Muslims, the Temple Mount is open to Muslim worshippers — and technically closed to Jewish worshippers — under a complex security agreement reached in 1967, when Israel captured the site. In recent years, Israeli authorities have allowed some Jews to pray at the site — the historic site of Judaism’s destroyed Holy Temple — sparking international condemnation over what many call a rupture in the area’s “status quo.”

Thousands of Jews have been allowed into the Temple Mount this year in what could be a record high, various reports claim.

After Israel’s Diaspora affairs minister said there has been “a certain escalation, a certain deterioration of the status quo,” Israel’s Foreign Minister Yair Lapid said Sunday “Israel is committed to the status quo on the Temple Mount.”

“Muslims pray on the Temple Mount, non-Muslims only visit. There is no change, there will be no change,” Lapid said, according to a report in The Times of Israel.

Over 50 Palestinians were injured in clashes with police at the site on Friday, in a pattern that has played out throughout the Ramadan holiday this year and last year. Israeli police said they intervened after the worshippers began to throw rocks and fireworks.

This year has the seen the rare convergence of Passover, Easter and Ramadan. Tensions have grown in the Old City, where on Saturday police restricted attendance at the Holy Fire ceremony at the nearby Church of the Holy Sepulchre marking the day before Christian Orthodox Easter. Israeli authorities claimed the move was made to counter overcrowding concerns.

“Israel, the occupying power, must respect the historical and legal status quo in Jerusalem and its sacred [sites], and stop all restrictive measures,” Jordan’s foreign ministry said in a statement.

A rocket launched from Lebanon landed in an open area in Northern Israel on Monday, in what some are calling a reaction to the Temple Mount incidents. Israel responded by firing back at “open spaces in south Lebanon, near the launch area, and also at an infrastructure target,” Reuters reported.