A women’s magazine appointed a ‘rabbi in residence.’ It chose a man. 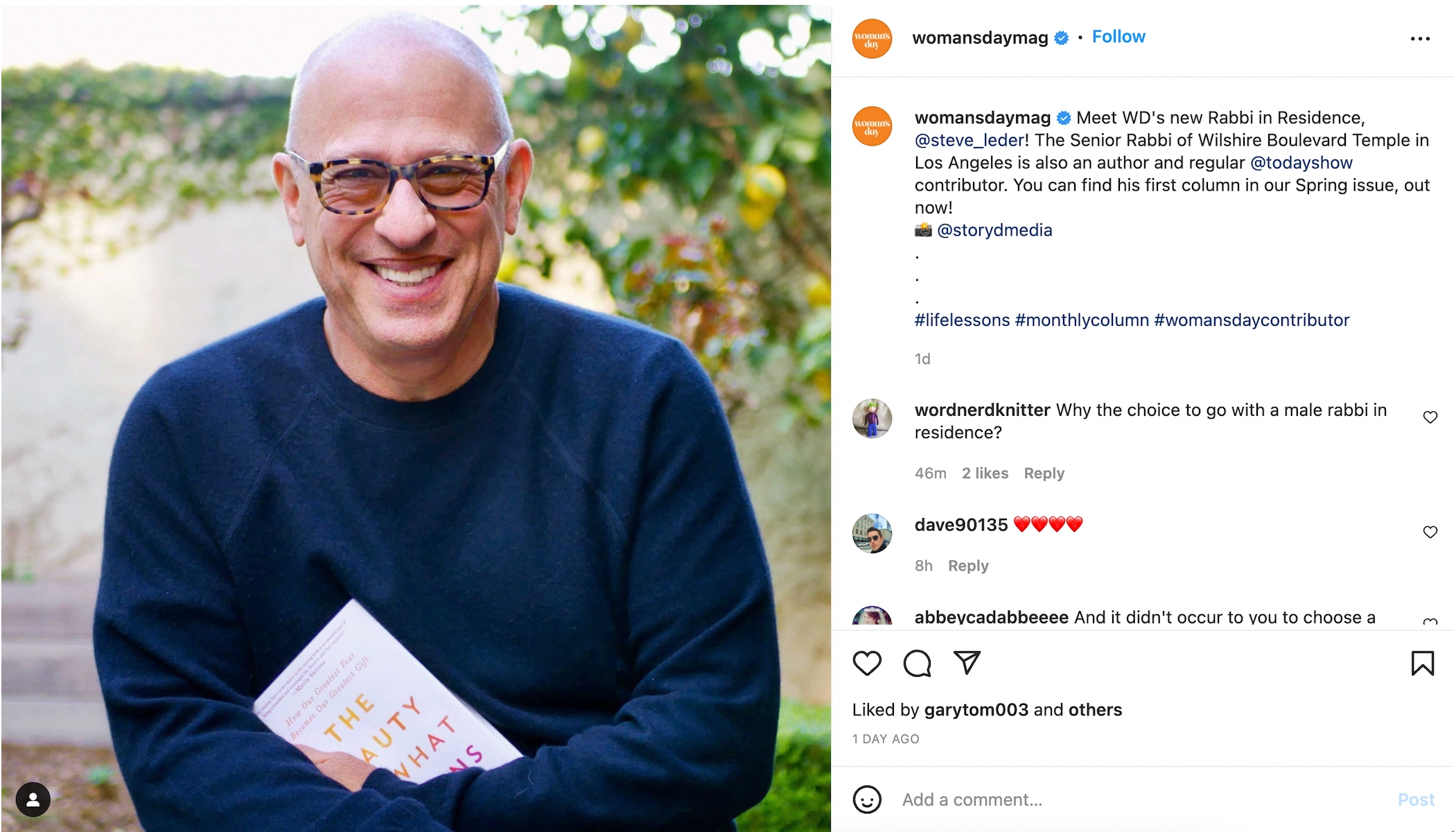 (JTA) — For health content, the women who edit Woman’s Day turn to a panel of 25 experts — all but one of them women.

When it comes to fitness, food, nutrition and homemaking, the 91-year-old magazine for American women relies on women as well, according to its website.

Now, the magazine has appointed its first-ever rabbi in residence, for its prominent faith coverage — but it has not turned to the growing numbers of women in the American rabbinate.

Instead, the magazine announced Sunday that Steven Leder, senior rabbi of Wilshire Boulevard Temple in Los Angeles, would hold the position. His columns about Jewish holidays and ideas will appear monthly.

The announcement, made on Instagram, immediately drew criticism from Jewish women who questioned why the magazine would elevate the voice of a male rabbi when there is no shortage of women rabbis who might want to speak to Woman’s Day readers.

“It feels to me that the role of women’s media, whether it’s traditional or progressive, should be — maybe it’s my dream — I would like it to be that it would uplift women’s voices,” said Rabbi Sari Laufer, who like Leder works at a Los Angeles synagogue, told the Jewish Telegraphic Agency. Laufer was one of the first people to call attention to Woman’s Day’s announcement Sunday.

Leder told JTA that the position came about after Woman’s Day content director Meaghan B. Murphy read “The Beauty of What Remains,” his book about grief and loss inspired by one of his popular sermons. Murphy invited him onto her podcast last September.

“I really have to credit Meaghan for her open-mindedness and open-heartedness to present this to a readership that is mostly non-Jewish and represents mostly women and is not a place where you would expect to see a rabbi in residence with a monthly column,” Leder said.

Murphy declined to comment to JTA, and the magazine did not respond to a request for comment by press time. Woman’s Day, which began as a supermarket marketing circular in 1931, has described itself as seeking to appeal to women who consider themselves the “chief health officers” for their family. Unlike other women’s magazines that have sought to broaden their coverage or audiences in recent years, Woman’s Day has maintained a more traditional profile, offering recipes, homemaking tips and relationship advice.

Its faith section contains lists of Bible verses for various occasions, explainers about Jewish and Muslim holidays and recommendations of “movies, books and media for Christians.”

Leder rebuffed criticism of his appointment and said he believed there was value in having a male rabbi speak to Woman’s Day’s audience.

He added, “I would hope that we can all see each other as people first. I think that’s the goal of every religious leader, is that we first recognize the humanity and equality in every human being. So I would hope that every reader is able to do that.”

Laufer said she thought readers could benefit from Leder’s contributions. But she also described how a push over the last several years in Jewish professional circles to elevate the voices of women and end the practice of “manels,” or panel discussions that include only men, had elicited commitments from many men to cede opportunities that should or even could go to women.

“Yes, any rabbi can speak about forgiveness or speak about liberation or speak about universal themes and Rabbi Leder does that profoundly and beautifully. He’s a remarkable writer and teacher,” Laufer said.

But, she added, “There are male allies who have really signed on to help us make some of these changes and so some of the job is holding them to that.”

Leder told JTA that he thought it was problematic for anyone to judge his appointment at Woman’s Day on the basis of his gender.

“I would hope that women rabbis who are questioning the appropriateness of my appointment would read my columns and consider my words rather than my gender; granting me the same equality and respect they themselves seek and deserve as rabbis,” he said.

“These are legitimate questions that you should be prepared to respond to instead of saying the response from women sound sexist to you,” wrote Rabbi Sandra Lawson in the comments of the announcement from Woman’s Day. Lawson is the director of racial diversity, equity and inclusion at Reconstructing Judaism.

Lawson told JTA said she found both Leder’s defense of his appointment and his response to criticism lacking.

“In a world where all things were equitable, it would be totally fine for a man to speak for a women’s magazine. That’s the argument he was making — but that’s not the world we live in,” she said.

“We need to be doing the job of lifting up more marginalized voices and there are tons of women that could have been approached,” Lawson added. “I also think that our male colleagues have an obligation … to ask more thoughtful questions about why they are being selected and then doing the correct thing of recommending a female colleague.”

Leder is not a stranger to the spotlight. In addition to his synagogue work, Leder is also involved in interfaith outreach and makes frequent media appearances on “CBS Mornings” and “The Today Show,” where he is a contributor.

He told JTA that his contributions to Woman’s Day would be unpaid. He also said that in some ways, he represents a marginalized voice within Judaism.

“I suspect that the majority of rabbis in the Reform movement are women,” he said. “So one could actually make the case that I’m representing the minority of Reform rabbis.”

In fact, while the majority of newly ordained Reform rabbis in recent years have been women, the vast majority of living rabbis affiliated with the movement are men, and the movement’s own analyses have found wide, and in some cases growing, pay gaps between women and men in synagogue pulpits.

The movement is celebrating the 50th anniversary of its first woman rabbi this year, making Woman’s Day’s decision all the more painful, Laufer said.

“For a lot of us, we’re celebrating 50 years of women in the Reform rabbinate in June and it still feels like, wow, we’re still fighting some of those early-day battles,” she said.