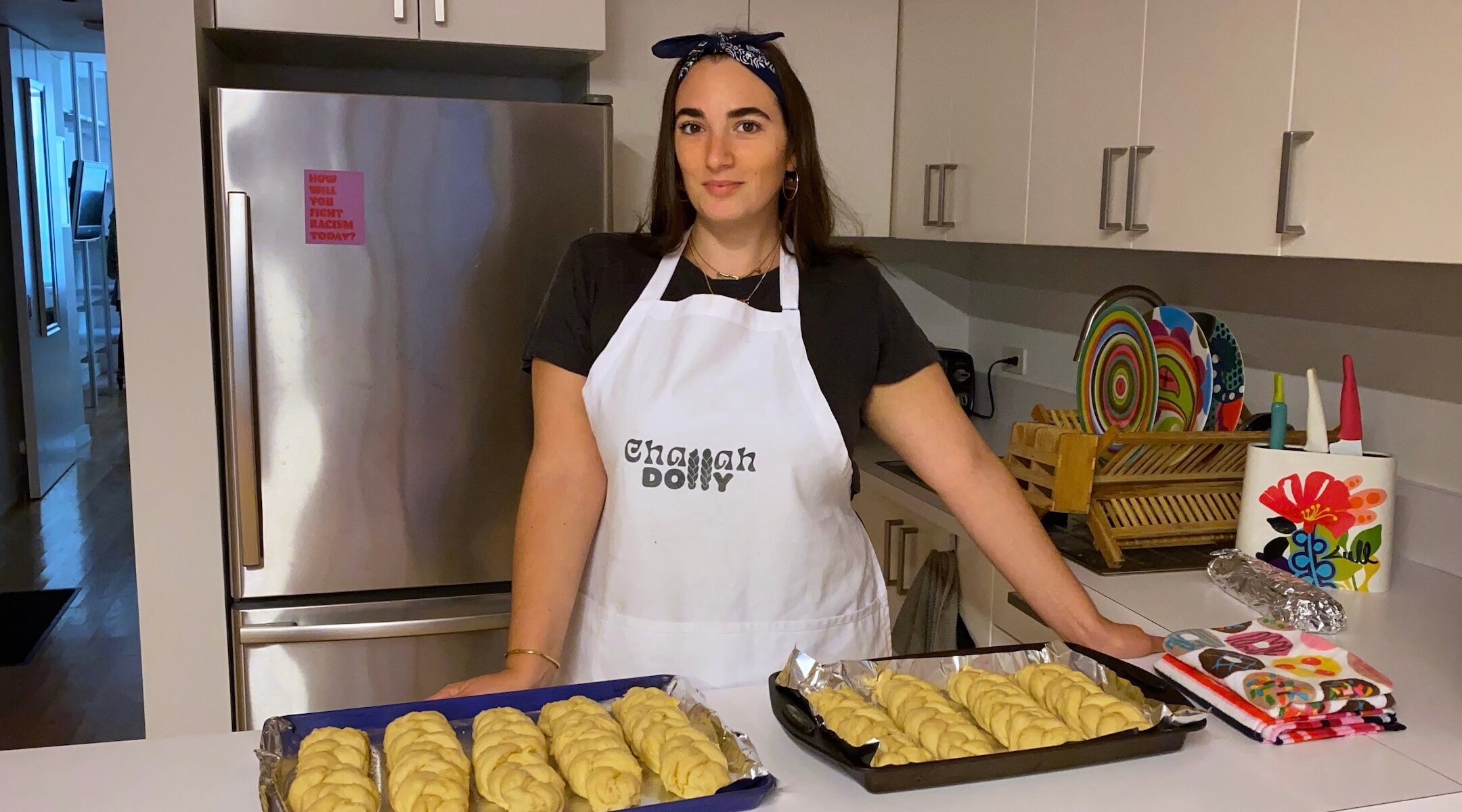 Dolly Meckler started baking challah to keep herself busy through the pandemic, eventually turning her one-time hobby into a full-fledged challah-making business. (Courtesy of Meckler)
Advertisement

(New York Jewish Week) — Dolly Meckler did not grow up making challah — the sweet, pillowy bread that is the centerpiece for many Jewish holidays, including Shabbat.

Actually, Meckler wasn’t even much of a baker before COVID-19 lockdowns forced her, and pretty much everyone in the world, to become prisoners of the home. Like many millennials at the time, Meckler, 30, started baking her loaves to keep herself busy through the long hours and weeks of isolation. She documented her process on Instagram and was surprised when people started asking to purchase her loaves.

Now, after a move back home to New York City in the summer of 2020 and into her third commercial kitchen space, her one-time hobby — Challah Dolly — is a full-fledged challah-making business. Meckler offers three different varieties — original, honey cinnamon sugar and everything seed — which are currently available at five markets across New York and Connecticut, as well as for sale directly from her website.

One of Meckler’s main goals is to make Jewish food more accessible — even “trendy,” she said.

“I am trying to make it accessible to people that might feel intimidated, and that might not know what challah bread is,” Meckler told the New York Jewish Week. “I think that I’m an entry point for people who have never had challah before.”

Of course, over the course of the pandemic, there has been no shortage of food — and Jewish food — entrepreneurs. Meckler joins the likes of Kayla Kaye, Blake Hunter of Hella Bagels and Mandy Silverman, who are creating baked goods and showing them off on social media. But Meckler has broken ahead of the pack, with profiles in Forbes, The New Yorker and Time Out New York, among others. She’s also received shout-outs from the likes of Lena Dunham, handbag designer Susan Alexandra and popular food Instagram @foodbabyny.

In the very beginning, Meckler followed a recipe from the New York Times. She then decided to experiment with a recipe that was passed onto her from a family friend, which is what she uses now. Not much of a “kitchen girl” before this all began, she said, Meckler’s background is in entertainment: She had moved to Los Angeles about six months before the pandemic to do some freelance social and digital marketing after working similar roles at HBO and YouTube. 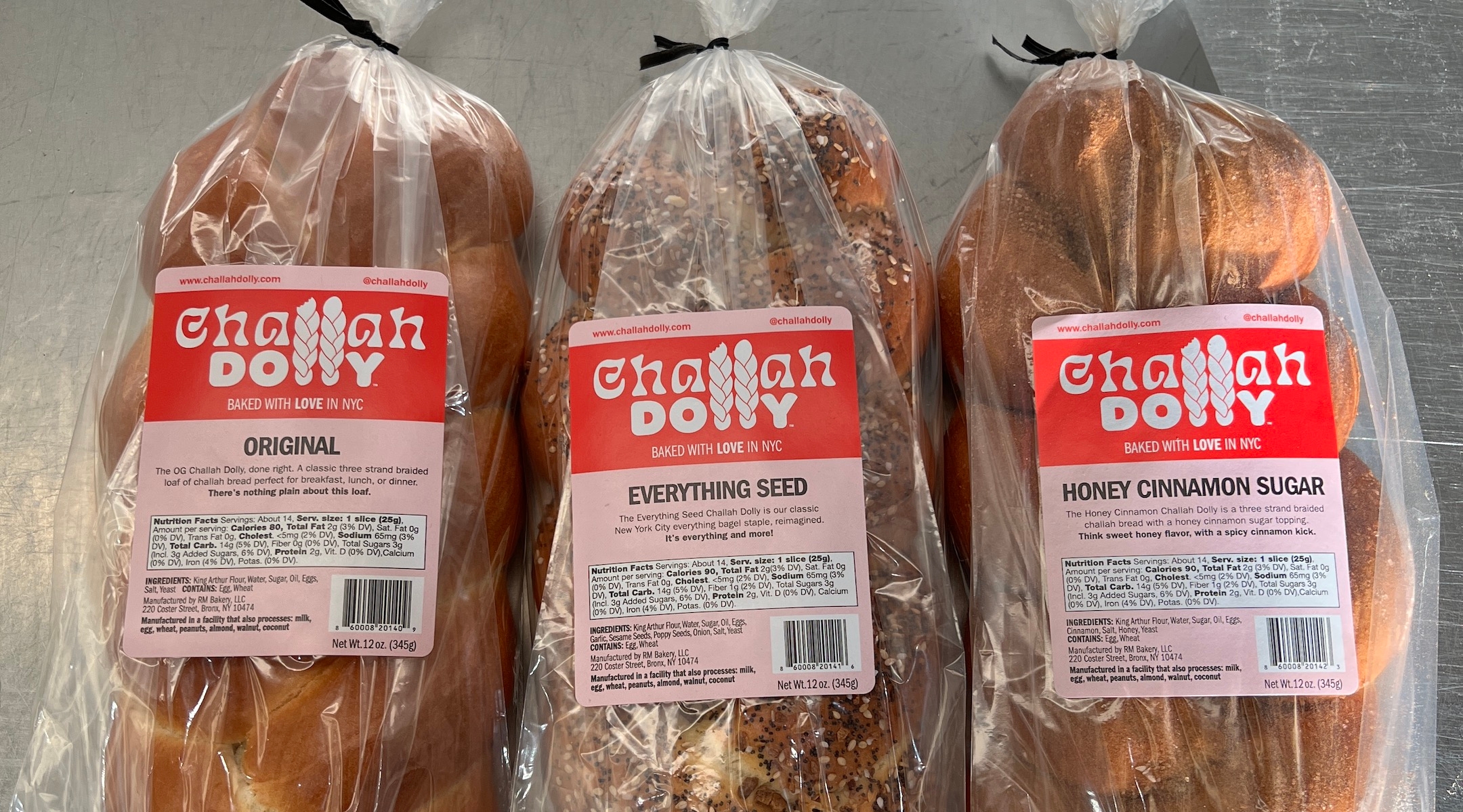 That social media skill gave Meckler a leg up when it came to launching Challah Dolly. She was able to combine her innate understanding of what works on Instagram to show off the challah and the brand. Meckler said she also loves to dress up in “high fashion” outfits and photograph herself alongside the challah, making it fun and playful for consumers.

“I look at my business through this lens of storytelling,” she said. “That’s just naturally where my brain goes. Whereas, you know, Tate’s Cookies — she was a baker. I’m not a food artist, I’m not recipe testing. I’m not doing that sort of thing. I’m thinking: How do I spread the story? I love the people component, so how do I build community? How do I connect with other people? What does this mean to other people?”

Meckler started off by taking orders on her Instagram page, waking up at 5:30 each Friday morning and baking as many as 32 loaves for pickups that evening. She opened up her online shop in February 2021. But getting the product into brick-and-mortar stores was tough in the beginning — that is, she said, until she brought them a few slices. “What sealed the deal for a lot of these places was they told me, ‘You know, we put it out for our employees, it’s gone, everyone ate it so fast,’” Meckler said.

These days, Challah Dolly has grown into a (mostly) full-time gig. Now that she’s transitioned to working with a wholesale bakery, Meckler primarily handles the business aspects of Challah Dolly: putting more loaves into stores and working on the email marketing and social media.

She also interviews other young creators for a digital web series and podcast called “Hello Dolly!” As part of that project, Meckler also created a series called, “You Have Such a Pretty Face,” which profiles women about their experiences with fatphobia and beyond. Meckler is passionate about “destigmatizing” bread, and encourages people to not be scared of it and its carb contents.

In addition to being delicious, the eggy, braided version of challah is a key piece in Ashkenazi Jewish culinary tradition. The bread is the centerpiece of many Jewish celebrations, especially Shabbat: Two loaves are traditionally served on Friday and festival nights to symbolize the two portions of manna distributed to the Israelites after the exodus from Egypt so that they could rest and have enough bread to last through Shabbat. 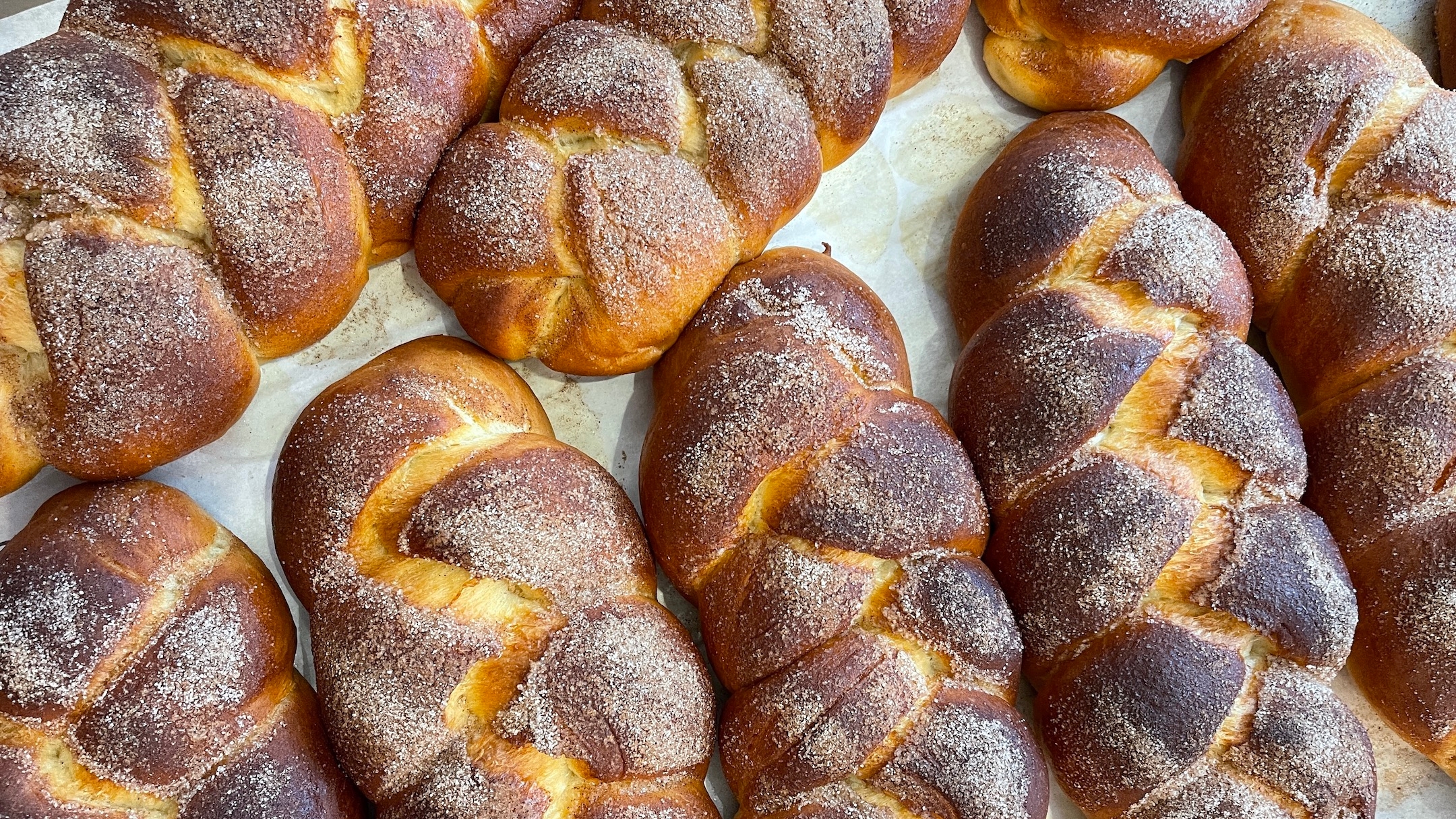 Before working with a wholesale bakery, Meckler would wake up at 5:30 each Friday morning and bake as many as 32 loaves for pickups in the evening. (Courtesy of Meckler)

The key ingredients in a typical challah dough are yeast, flour, egg, sugar and salt. There is, however, room for a wide variety of interpretation.

“Usually when you’re buying challah, it’s from a very traditional place where people are buying it for a purpose, for a meal or a holiday,” said food writer and baker Gaby Scelzo. “Because they’re so simple and traditional and meant to go with other things, I don’t think they’re supposed to be the main event. They don’t stand out as much as what Dolly is doing, where the main event is the challah.”

“It’s the perfect combination,” Scelzo said of Meckler’s loaves. “The braids are beautiful, you cut into it, it has like a little bit of a crisp shell. The inside is so stretchy and fluffy, but also a little sweet.”

Throughout her challah-baking journey, Meckler said that Challah Dolly has helped her become more in tune with her Jewish identity. She and her family moved from New York to Connecticut when she was 10 years old, and she and her brother were among the few Jewish kids at their high school. She made more Jewish friends while attending Indiana University. Since moving back to New York, she said, baking challah has only made Meckler feel even more proud of her Jewish heritage and the city she comes from.

“There’s such an opportunity to try and make Judaism feel modern and cool,” Meckler said. “And like, not that it’s just reserved for Friday Shabbat dinner. I want people to be eating challah with their sandwiches or with any meal, like it’s just really good bread, all religion aside.” (Challah Dolly does not have a kosher certification.)

For now, Meckler is hoping to braid her challah into the fabric of New York’s foodie scene. She said she would love to do collaborations with the likes of Russ & Daughters or Ess-a-Bagel. For now, though, she’s happy that her challah is resonating with a wide cross-section of New Yorkers.

“I’ve had a lot of people say to me, ‘Wow, this is the first time I’ve ever had challah bread,’” Meckler said. “I love that, because it’s like, ‘wow, I am so honored to be the first experience that you have with this really special bread.’”