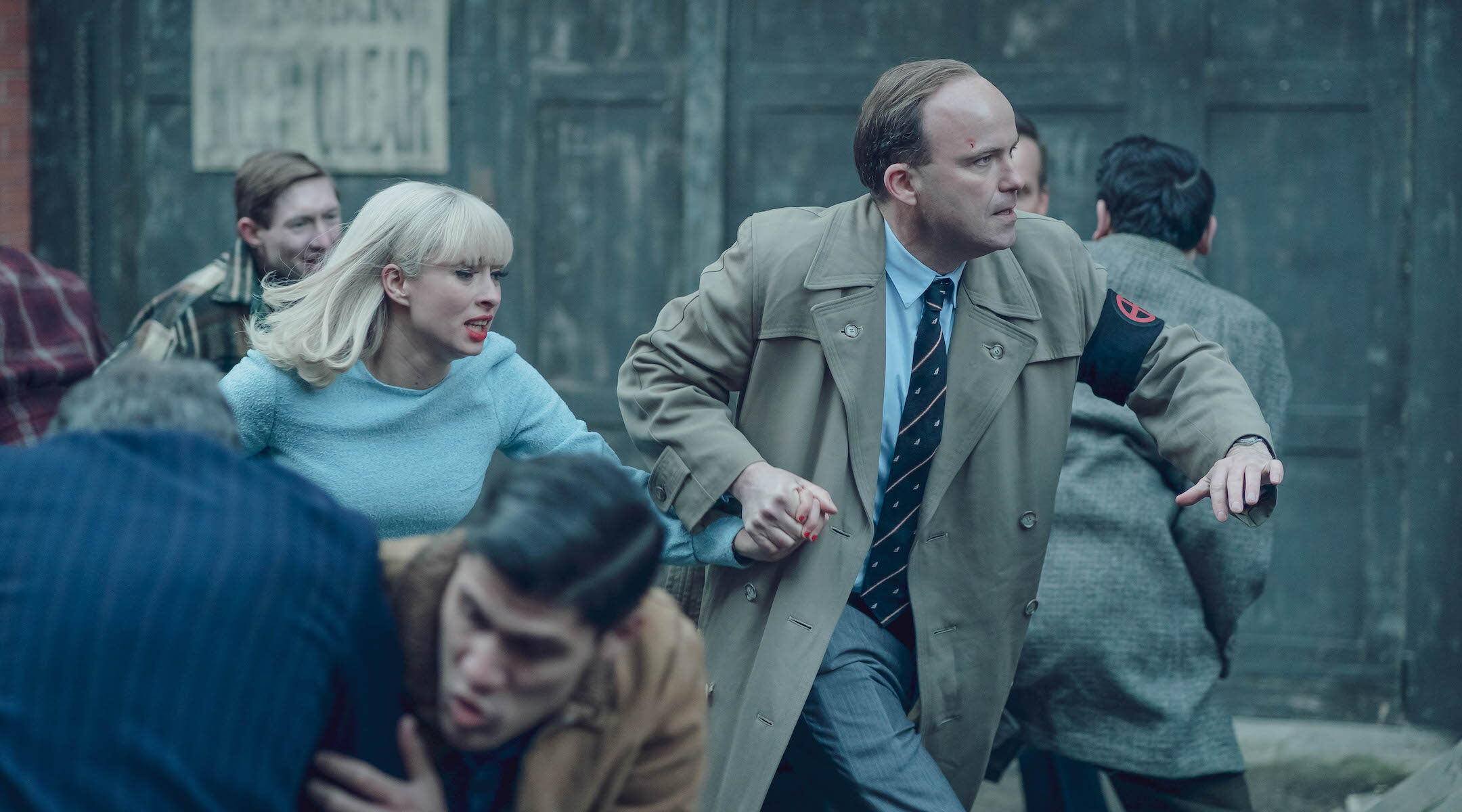 (JTA) – It sounds like it could be the story of Purim: A Jewish woman uses her sex appeal to enter the upper reaches of a group whose members are hell-bent on destroying the Jews.

But instead of Esther with King Ahasuerus, imagine her becoming romantically involved with Haman himself — and instead of the Persian Empire, it’s the British Empire, circa 1962.

“Ridley Road,” a gripping and provocative four-part miniseries debuting on PBS’s “Masterpiece” on Sunday after airing on the BBC last year, is a fictional story set in the very real world of British neo-Nazis. Led by Colin Jordan, the National Socialist Party enjoyed a postwar resurgence among antisemites and fascist sympathizers in London.

After the local Jewish community felt stymied by their efforts to reach out to law enforcement, a group of committed Jews formed the underground antifascist 62 Group, which sent undercover members to infiltrate the neo-Nazis and shriek about “Zionist scum” while sniffing out their plans to attack local synagogues and funerals.

The series imagines how one such undercover operation might have gone, by inventing the character Vivien Epstein (Agnes O’Casey), a Jewish hairdresser who joins the 62 Group, dying her hair blond to pose as an Aryan and attract the infatuations of Jordan (Rory Kinnear), who marches his militia through London holding signs like “Free Britain from Jewish Control” and “Keep Britain White, Stop Jewish Immigration.”

Initially just trying to ensure the safety of her lover, who is also posing undercover within the National Socialists, Vivien quickly realizes that her feminine intuition gives her greater access into Jordan’s schemes, and she becomes a top courier of information to the local rabbi and 62 Group leaders, all while trying not to blow her cover.

Based on the 2014 novel by Jo Bloom, “Ridley Road” is named after the real London street uneasily shared at the time by Jews and fascists alike, along with many other cultures equally derided by the National Socialists. It was adapted for TV by writer-director-actress ​​Sarah Solemani, a British Persian Jew and the daughter of an Orthodox marcher in the Anti-Nazi League (a post-62 Group organization formed in 1977 that helped organize an anti-racist rock concert) who was himself the victim of antisemitism in 1960s London. 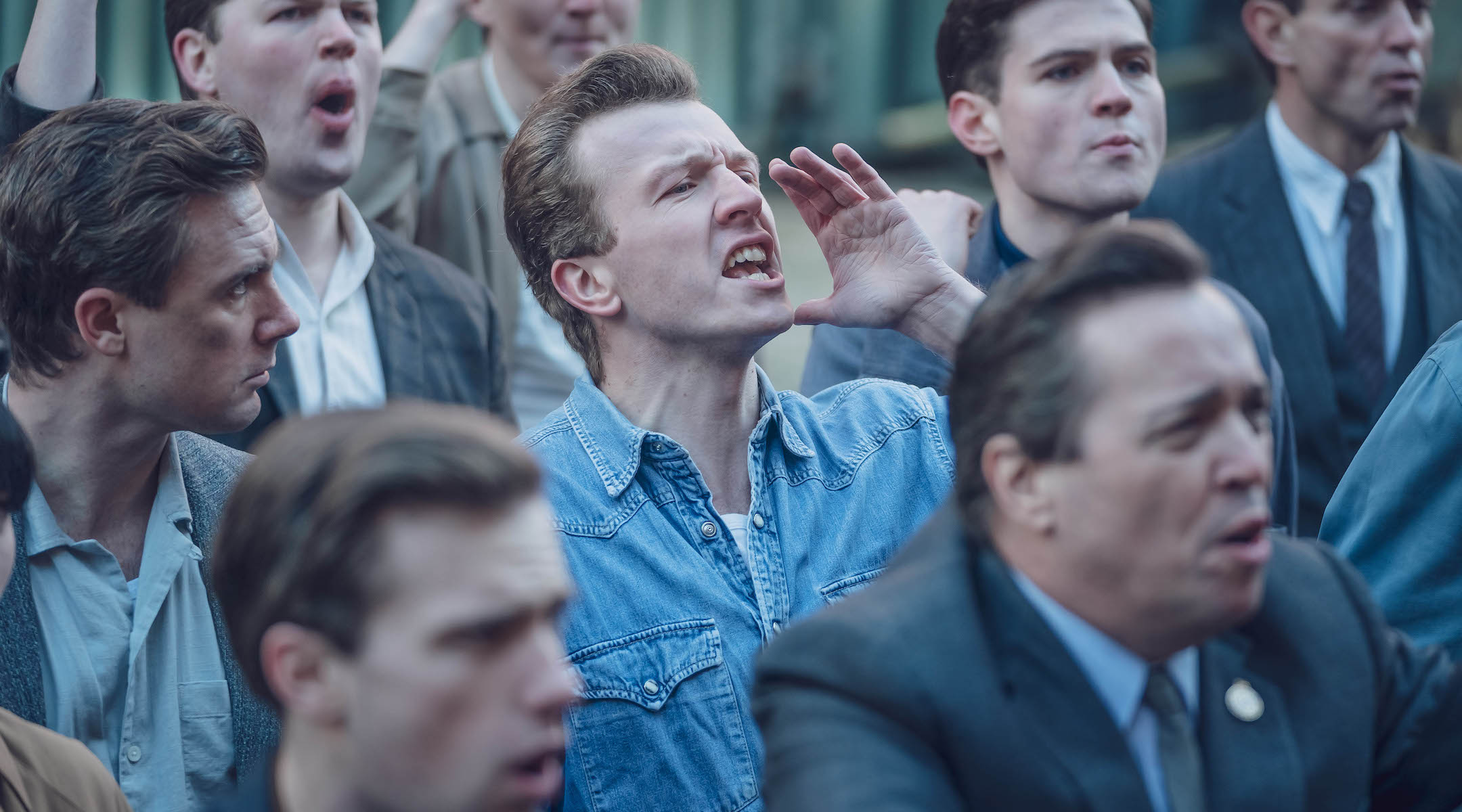 Jack (Tom Varey) is a Jew posing undercover as a neo-Nazi in 1960s London in “Ridley Road.” (Courtesy of RED Production Company and Masterpiece)

While the throughline of the story is fictional, its casing is all based on real people and events. The show’s instigating incident is a 1962 Nazi rally the National Socialists held in London’s Tralfagar Square. A pivotal Nazi attack on a yeshiva that leaves a Jewish boy dead is also based on a real event, and there are appearances by George Lincoln Rockwell, who was the real leader of the American Nazi Party, as well as by Françoise Dior — the French fascist and member of the haute-couture family who was Jordan’s real-life wife and true believer in the movement.

Though the espionage in the series is gripping, what’s most striking about “Ridley Road” is how it depicts even the casual antisemitism among the non-Nazis of the era. Even before she goes undercover, Vivien is hiding her Star of David necklace from rowdy youths on the train in one scene, and none of the Jews trust the local police to root out the bad guys. In a climactic chase scene, Vivian begs ordinary Londoners to help her flee from the Nazis — and in a chilling reminder of what the norm was during the war, they all refuse.

We also see the general ease with which economically displaced white people could blame Jews and immigrants for their misfortunes — a lesson that has, sadly, proven timeless. For example, Jordan blames the demise of locally owned grocery stores on the rise of “Jewish-owned” national chains like Tesco, and also rants about his belief that Jews are behind the rise of communism.

Yet despite the darkness at play, it’s also exciting to see a Jewish community take such an active role in not just condemning but actually fighting (sometimes physically) those who would wish to destroy it.

“It doesn’t matter whether you are a non-racist or non-fascist,” Vivien’s uncle, the head of the 62 Group, tells her at one point when she is considering bailing on her undercover work. “The only thing that matters is that you’re anti… An anti-fascist fights.”

“Ridley Road” premieres May 1 on PBS.