Jewish soldiers are buried under crosses around the world. A rabbi’s nonprofit is changing that. 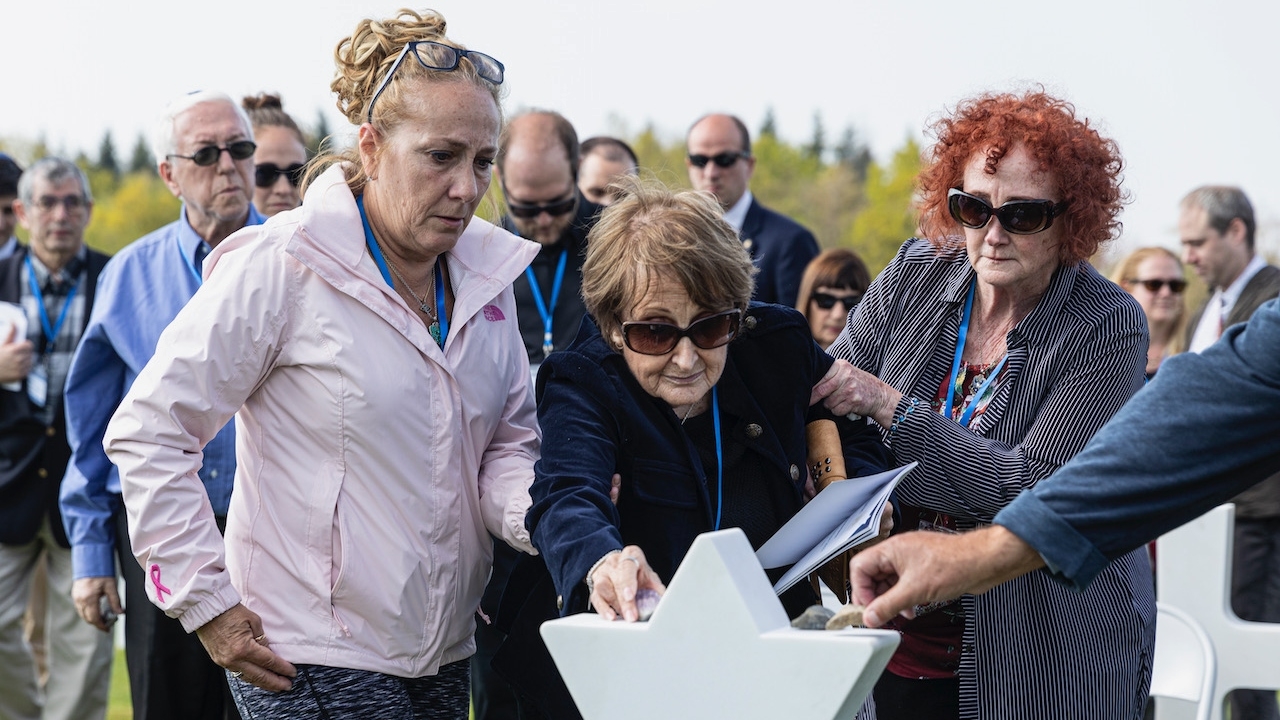 Assisted by her daughters, Mariellen Miller pays respects to her half brother, 2nd Lt. Kenneth Robinson, who was for decades mistakenly buried under a cross in Ardennes, Belgium, April 27, 2022. (Operation Benjamin)
Advertisement

(JTA) — Rabbi Jacob J. Schacter was visiting the cemetery for U.S. soldiers in Normandy when something struck the professor of Jewish history at Yeshiva University as odd: There seemed to be too few non-Christian graves.

That insight in 2014 resulted in a nonprofit project that tracks down the graves of Jewish U.S. servicemen mistakenly buried under crosses, to give them Star of David headstones.

Operation Benjamin has so far replaced the headstones of 19 U.S. Jewish servicemen, including seven who underwent the ceremony last week in cemeteries in France, Belgium and Luxembourg, the Military Times reported.

The group’s first successful identification was Private First Class Benjamin Garadetsky, born Boruch Reigorodeczki in Ukraine, who was killed in 1944 in a Luftwaffe bombing after landing in France during the D-Day offensive. Garadetsky’s marker in Normandy was changed in 2018, and his name lent itself to the nonprofit, which does not take money from the families of the dead soldiers. It solicits donations through its website.

The group coordinates with the American Battle Monuments Commission, the government agency responsible for overseas graves. The placement of crosses was often the result of administrative error in war times, or of soldiers obscuring their Jewish identities during a war in which Nazis summarily executed Jews.

Operation Benjamin is working on another 22 names. The organization has a single full-time researcher, and it will often contact photographers in countries where there are American gravesites to further their research.

In a 2020 essay for The New York Jewish Week, Schacter explained that mistakes were often made in the chaos of battle, and that Jewish soldiers would often remove from their dog the capital letter “H” that identified them as “Hebrew,” in case they fell into enemy hands.

“These Jews died so we could remain alive — and free. Remembering them for who they were is the least we can do,” he wrote. “Being involved in this chesed shel emet, a ‘true kindness,’ is a matter of hakarat hatov — recognizing the good they did for us, and being appreciative of their sacrifices.”

Scachter’s co-founder is Shalom Lamm, son of the late Rabbi Norman Lamm, the longtime president of Yeshiva University. The younger Lamm, a real estate developer, made headlines in the middle of the last decade when he battled an upstate New York village over his plans to build housing there for Hasidic Jews. The village paid out $2.9 million in 2016 to settle Lamm’s claim that its resistance to the project amounted to discrimination against Hasidic Jews, but a year later, Lamm was sentenced to 10 months in prison for voter fraud in a bid to stack the local authority with officials who would be favorable to the development.

Lamm described to the Jewish Telegraphic Agency a typical ceremony, in this case, of Second Lieutenant Kenneth Robinson, buried at Ardennes in Belgium. Attending the ceremony last week were members of Robinson’s family, including his half-sister Mariellen Miller.

“When the headstone is replaced, Rabbi Schacter repeats a line for each soldier which has become iconic,” Lamm said. “‘Second Lieutenant Robinson, on behalf of the citizens of America, we thank you for your service, and Kenny, on behalf of the Jewish people, we welcome you home.’ It just sums it all up perfectly. We are there as a grateful nation, and we are there as a proud people.”