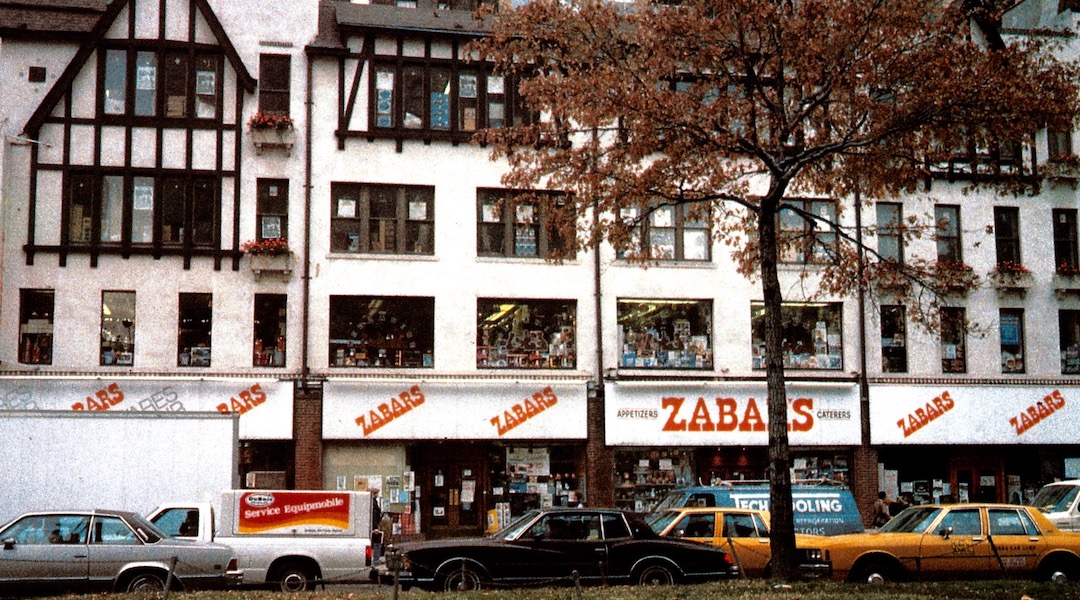 Zabar’s in 1985, after Saul, Stanley and Murray acquired and expanded the store into five contiguous buildings (Copyright © Zabar’s and Company, Inc. All Rights Reserved.)
Advertisement

(New York Jewish Week) — In the autumn of 1934, my grandfather [Louis Zabar] had a fateful conversation with a man named Charlie Raffa. A gregarious fellow with a thick Italian accent, Charlie owned the Ideal Fixture Company, which sold supermarket equipment to fellow immigrant entrepreneurs. Affectionately dubbed “Charlie Ideal” by his customers, he was known for providing them with affordable payment terms. (Four decades later, he would become even better known as Matilda Cuomo’s father and Gov. Mario Cuomo’s father-in-law.) Charlie told Louis about an available retail space on the Upper West Side of Manhattan.

The space Charlie recommended was in the Crystal Pure Food Market, at 2249 Broadway, between West Eightieth and Eighty-First Streets. (The venue actually encompassed two buildings, 2249 and 2247 Broadway.) It was a good location for a retail store. Even though America was in the depths of the Great Depression, the Upper West Side was still a relatively prosperous residential neighborhood. It was also largely Jewish, as many of its residents had migrated there from the teeming Lower East Side when they became more successful. On weekends, men in bespoke suits and women in furs paraded up and down Broadway with their well-dressed children, exchanging greetings. Newly arrived German Jews, fleeing Hitler’s Third Reich, could be found having coffee or tea at Steinberg’s Dairy Restaurant or the Éclair pastry shop.

This stretch of upper Broadway was already a hub of food retailers and restaurants such as the Great Atlantic & Pacific Tea Company (a grocery store that eventually grew into the iconic A&P supermarket chain), the Little Tip Toe Inn, and the Sherman Cafeteria. Across the street stood the Dubowy Bakery and Dairy Restaurant, the Broadway Cafeteria, and the G&M Pastry Shop.

Louis and Lilly rented a counter in the Crystal Pure Food Market and moved their operation to the new space in the fall of 1934. The entire store encompassed 2,500 square feet on the street level of a five-story Italianate structure (the northernmost section of the five buildings that make up Zabar’s today). Sawdust covered the wooden floors and the air was rich with the aromas of smoked salmon, delicatessen meats and tangy pickled vegetables. Because of Louis’s skin allergy to fresh fruits and vegetables, they had switched to selling more lucrative and nonallergenic appetizing and delicatessen.

Three other shopkeepers occupied space in the Crystal Market and, just like Louis, they were all ambitious tradesmen from immigrant families. On the market’s north side, Jackie Sloan sold fruits and vegetables. Jackie was a relative of Max Sloan, who owned several produce shops on upper Broadway called the Orange Grove and eventually founded the Sloan’s Supermarket chain. Abraham J. Dubin, a member of the Daitch Crystal Dairies family, owned and managed the Crystal Market and also sold milk, butter, cheese, and eggs in the front of the store. Toward the back of the space, butcher Sigmund Rosengarten sold fresh meat and fish. Rosengarten later founded the Shopwell Supermarket chain in Westchester County. (In 1955, the two businesses, by then both significant supermarket chains in the greater New York region, merged to become Daitch Shopwell. In the 1980s, the chain morphed once more, into The Food Emporium.)

When my grandparents opened their store on the Upper West Side, they decided to call it Zabar’s, and that has been its name ever since. For the first two years, Louis listed his business in the telephone directory as a delicatessen, but then he changed it to “appetizer.” It stayed that way for the next three years. 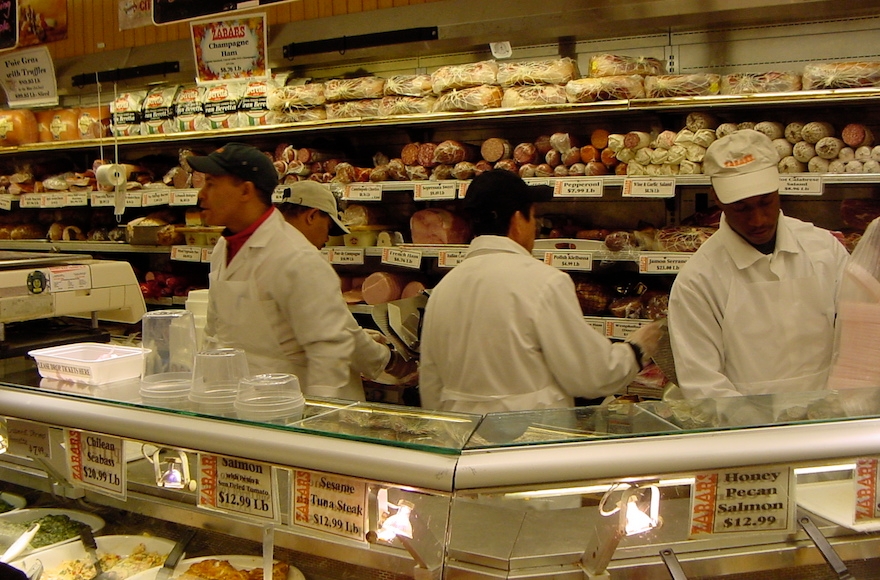 The initial, late-nineteenth- and early-twentieth-century distinction between a delicatessen (which sold cured and prepared meat, such as pastrami, corned beef, tongue, salami, hot dogs, roast beef, brisket and chopped liver) and an appetizing store (which sold smoked, cured, and pickled fish, including salmon, lox, herring, and whitefish, as well as cheese, butter, and bagels) was created for religious reasons. Kosher-keeping customers would not purchase meat and dairy products from the same store because knives that sliced pastrami could not also be used to cut Swiss cheese, and the platters that held deli meat could not later be used for herring in cream sauce.

But these distinctions were less meaningful to my grandparents, who kept kosher only at home, and from the get-go Zabar’s advertised itself as a “kosher-style” store. This was an unofficial, flexible term that generally meant that meat and dairy products were sold in the same store, were not prepared separately, and were not produced under rabbinical supervision. But — at least in the early years  — you weren’t going to find in Zabar’s such resoundingly nonkosher items as ham, bacon and lobster. Zabar’s customers — the upper-middle-class Jews who had moved into those elegant apartment buildings on Central Park West, West End Avenue, and Riverside Drive, and who did not keep kosher themselves — were fine with all this. Just as my great-grandparents Schlomo and Malke were less traditionally observant than their parents in their choices of attire and education for their children, so Louis and Lilly adapted their business to modern American Jewish practices.

After many years of selling fruits and vegetables, my grandfather had become a perfectionist about the quality of his goods. For this new venture, Louis would sample deli meats and fish from various purveyors before he would commit to doing business with those suppliers. To taste fish, Louis would tour dozens of local smokehouses, large and small, mostly in Brooklyn and Queens. He was notorious among the wholesalers for rejecting more than he accepted. His retail mantra was simple: the highest quality at the lowest price.

Cured and smoked fish were popular in observant Jewish homes because they are pareve, neither meat nor dairy, and can be eaten with either, according to Jewish law. Salmon, prepared in a variety of ways, became a Zabar’s mainstay. Lox, derived from the Yiddish version of the German word for salmon, lachs, was soaked in a cold salt brine for three to six months and then briefly washed to remove excess salt. Lox was not smoked or cooked; the salt brine preserved the fish. American Jews of Eastern European ancestry ate primarily lox until the mid-twentieth century, when many people decided that lox was too salty and switched to Nova Scotia–style smoked salmon, or “novie,” instead. (Customers often still referred to novie as lox.)

Nova Scotia salmon, originally only from Canada, was placed in tubs of brine containing salt and brown sugar and soaked in a cold room for about a week. Then the salmon was removed from the brine and smoked for eighteen to twenty-four hours at a temperature ranging from 70 to 76 degrees Fahrenheit, in a process called cold smoking.

Smoked Scotch salmon is wild salmon from Scotland, dry-cured with salt and cold-smoked in the British tradition. It has a subtler, less salty flavor and less oily texture than novie. Because of its milder flavor, smoked Scotch salmon is eaten with butter or crème fraîche on rye or sourdough bread rather than with cream cheese and bagels (a combination that originated in the 1930s). Until then, cured and smoked fish was traditionally consumed with butter on dark pumpernickel or rye bread.

Another type of smoked salmon sold at Zabar’s is baked or “kippered” salmon, which is hot-smoked starting at 100 degrees Fahrenheit and then increased to 200 degrees over six to eight hours, producing a moist cooked fish.

To be near their new enterprise, Louis, Lilly, Saul and Stanley moved from Brooklyn to an apartment in a five-story walk-up at 175 West 81st Street, on the northeast corner of Amsterdam Avenue, just a block east of their store. Although it wasn’t a fancy building, for my grandmother, who had yearned to be in Manhattan, it was a dream fulfilled. A little more than a year later, they moved down the street, to 204 West 81st Street, a slightly nicer building that actually had an elevator. Slowly but surely, my grandparents were inching their way toward better lives.

President Franklin Roosevelt’s New Deal programs had effectively stimulated the nation’s recovery from the Great Depression. Zabar’s, along with other retailers, was doing well. In the fall of 1938, with their business flourishing, the Zabars moved one last time, to a fifth-floor apartment at 219 West Eighty-First Street, a grand, twelve-story, white-brick-and-limestone building just half a block away from the store. Their new apartment —which would nowadays be described as a classic six — featured a living room, a dining room, two full bedrooms, a bathroom, a kitchen, and an adjacent “maid’s room” with bathroom, which was occupied by their newly acquired maid, Matilda. In addition to an elevator, the new apartment boasted another unmistakable indicator that the Zabars were now part of New York’s upper middle class: a doorman.

Adapted from “Zabar’s: A Family History, with Recipes” by Lori Zabar. Copyright © 2022 by Lori Zabar. Excerpted by permission of Schocken, a division of Penguin Random House LLC. All rights reserved. No part of this excerpt may be reproduced or reprinted without permission in writing from the publisher.