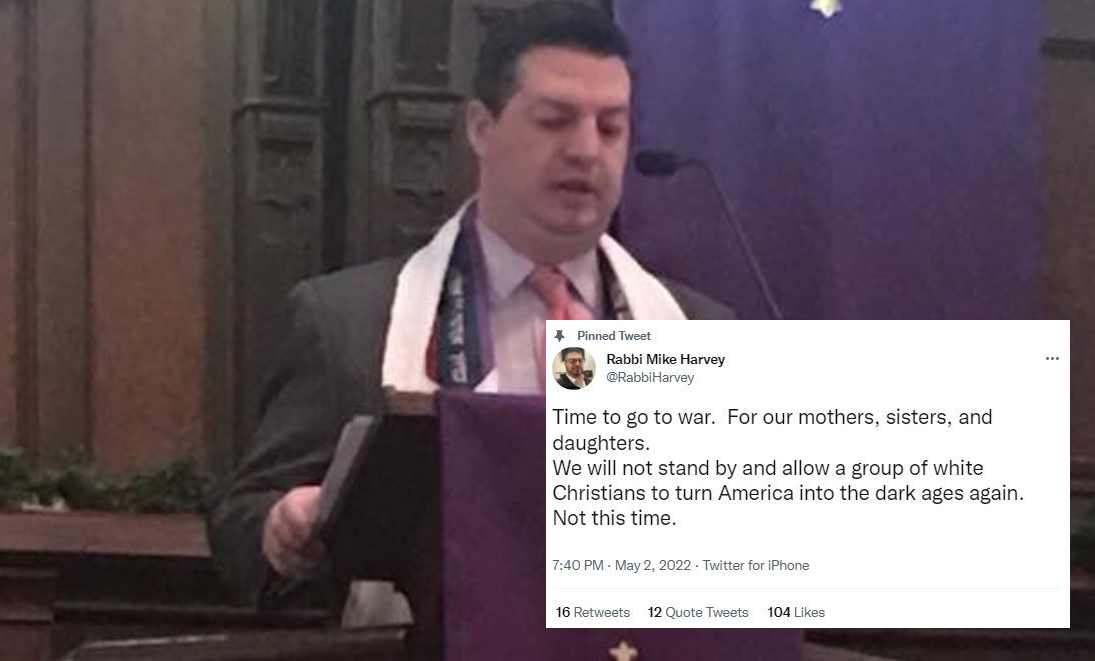 Rabbi Michael Harvey (courtesy), and the offending tweet he said he wrote out of anger.
Advertisement

(JTA) – Over more than a decade, Rabbi Michael Harvey built a reputation for himself as a Jewish spiritual leader who talks freely and openly to Christians.

In addition to his day job as a chaplain at Indiana University Health, the Hebrew Union College graduate produces a YouTube series called “Teach Me Judaism,” delivers talks on Judaism across the Midwest, and co-hosts a podcast and event series with a local Episcopal priest called “A Priest and a Rabbi Walk Into a Bar.” In a previous congregational role on the U.S. Virgin Islands, he founded the Interfaith Council of the Caribbean. He even has a book coming out: “Let’s Talk: A Rabbi Speaks to Christians.”

All of which made a series of posts from Harvey’s Twitter account last week, in the immediate aftermath of the leaked draft of a Supreme Court ruling that would overturn Roe v. Wade, so surprising.

“Time to go to war,” one begins. “For our mothers, sisters and daughters. We will not stand idly by and allow a group of white Christians to turn America into the Dark Ages again. Not this time.”

Another sent that same night, which Harvey said he didn’t write, was even more explicit.

“F–k Christians and their neverending imperialistic, nationalistic, fascistic patriarchy that puts peoples lives at risks [sic] and doesn’t give a s–-t what anyone or science says,” it reads, with the profanities unedited. “Shame on all who hold the cross. 2,000 years of your genocide continues tonight.”

What happened next was a case study in 2022 Twitter, which is filled with political activism, trolls and the constant chance that one wrong move could have major consequences.

Some of Harvey’s liberal supporters, both Jewish and Christian, expressed support for his messages. But the posts also prompted anger, including from antisemitic corners of the Internet who circulated them as evidence that Harvey fit into their hateful conspiracy theories about Jews conspiring to attack Christians.

Over the next few days Harvey apologized for “my rage filled tweets,” saying they were “inappropriate,” while also telling his followers that he had been hacked. He then retweeted a series of violent threats made against him.

Eventually he deactivated his Twitter account — no small matter for someone with 6,000 followers who once crafted a viral thread and follow-up Jewish Telegraphic Agency editorial about the experience of being a chaplain during COVID-19 — and left his job with IU Health.

“Well, this was a mess,” Harvey told JTA.

The whole saga might seem alien to people who don’t spend much time on Twitter, where enemies are routinely made and careers ruined over a single inflammatory post. But hacking of prominent Twitter accounts is a relatively common scourge. Occasionally hackers will pose as their target in order to fool their followers, as in a 2020 case in which many of the world’s biggest Twitter accounts, including Joe Biden, Barack Obama, Elon Musk, Kanye West and Bill Gates, were hacked to try to fool their followers into sending Bitcoin to the breacher.

Lower-profile figures have had their Twitter accounts breached and impersonated, as well, including British author Radhika Sanghani and The Atlantic editor Jacob Stern.

By Harvey’s account, that is exactly what happened last week. He said he sent one poorly worded tweet at around the same time he became a target of online Christian extremist groups, who had been upset with him over what he said was an “accumulation” of past Twitter threads pointing to historic examples of Christian antisemitism. That combination, he said, created a perfect storm.

Harvey takes responsibility for one of the tweets: the one that begins, “Time to go to war.” He had sent it the evening of May 2, the night the draft Supreme Court opinion leaked.

It was a moment, he said, of “righteous anger” over a legal opinion that he said was heavily influenced by a “small group of white Christians, these Evangelical Christians.” The tweet, he believed, made more sense in the context of his usual rhetoric, which has included Twitter threads on Christian support of the Holocaust and other difficult historical topics.

“That was appreciated by my followers, because they understood me as a person,” Harvey said. “When I said, ‘Let’s go to war,’ I mean[t] organizing, marching, legislating, advocating — all the legal channels in which we can fight for social justice.”

After sending that tweet, Harvey said, he went to bed — and woke up the next morning to a message from work asking him to explain a different tweet, the profane one. This one, he maintains, he did not send himself.

Instead, he said, a group of white nationalists and so-called “traditional Catholics,” who promote antisemitic ideologies labeling Jews as eternal enemies of Christianity, had been organizing on sites popular with online trolls, including 4Chan, in an effort to destroy his reputation. (Radical traditionalist Catholics may constitute the largest antisemitic movement in the United States, according to the Southern Poverty Law Center, which monitors hate groups; their theology is rejected by the Catholic Church.)

They had seized on his first tweet as an opportunity to hack his account later that same night and post a more inflammatory one, deliberately written in order to be as close to his usual style as possible while adding profanities: the hackers had done their “research in terms of how I tweet,” Harvey said.

Because Harvey deleted his account, it’s difficult to verify his timeline. 4Chan does not maintain an archive of its posts, and threads rarely stay active on the site for longer than a few days. In addition, various screenshots of the offending tweets have circulated on social media, with differing timestamps, some of which appear to show that his more profane tweet was sent prior to the one he takes credit for.

The inconsistencies indicate that some of the images have been doctored, and many of the screenshots are being circulated by white nationalists and traditional Catholics who are using the images to petition Harvey’s institutions, including his publisher, to disassociate from him.

Many of Harvey’s supporters have also rallied to his defense, criticizing Twitter for failing to take stronger action against so-called troll campaigns and people who share antisemitic material. Their critiques mirror long-held criticism of the platform that has only grown higher-stakes since the company announced last month that Elon Musk, the serial billionaire and world’s richest man, would become its owner. 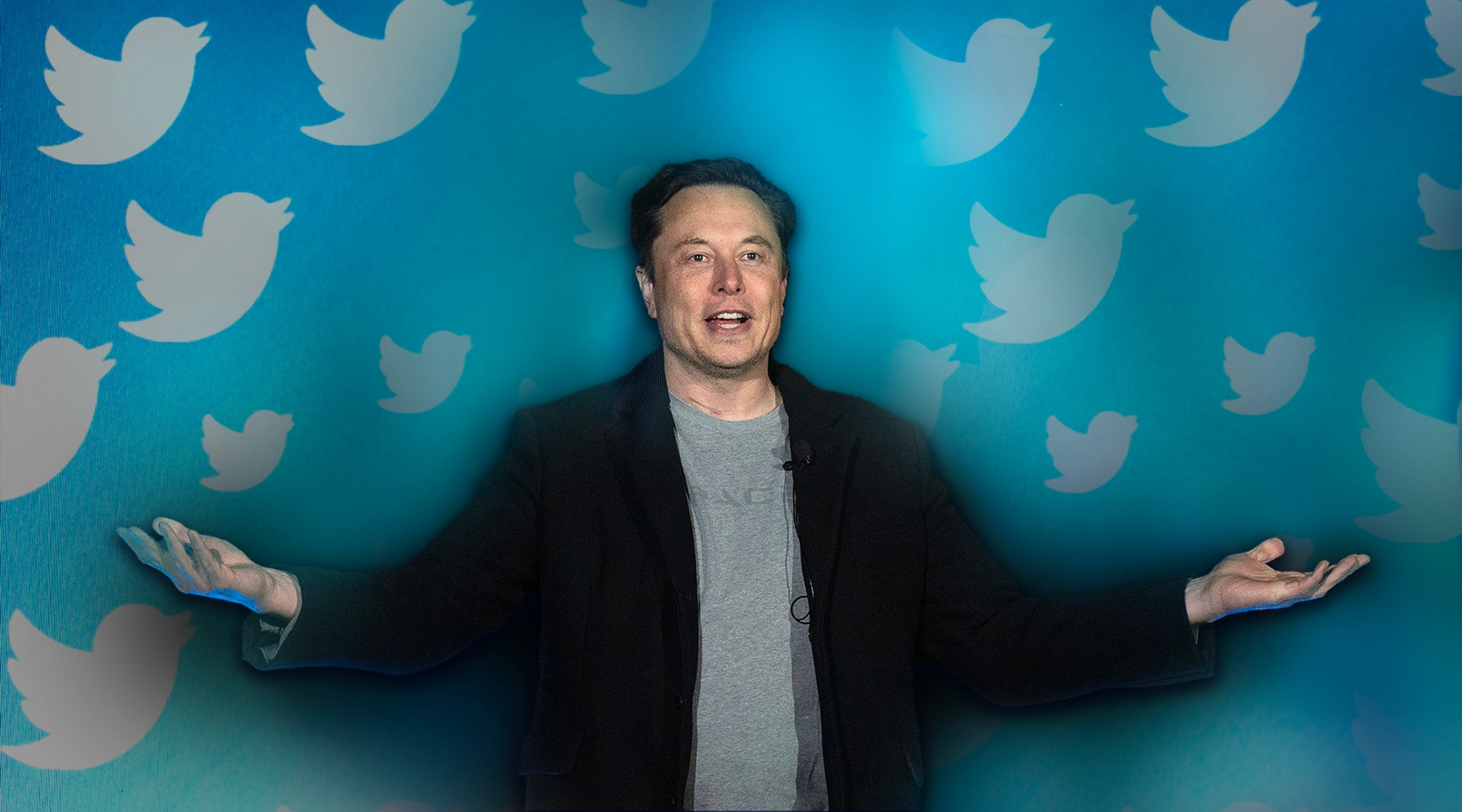 Elon Musk has been mum on the details of how he will try to reshape Twitter. (SOPA Images/Design by Grace Yagel)

Twitter insiders told Wired magazine that they feared an influx of bots and hate speech under Musk’s ownership. On Friday, Musk said he was putting his acquisition on hold pending an investigation of bots on the site — even as bots are seen as having been integral to the rise of Tesla, his electric vehicle company.

Harvey said all the negative attention was troubling for his employer, and he volunteered to resign his chaplaincy to spare IU Health from having to get caught up in the controversy.

An IU Health spokesperson confirmed to JTA that Harvey was no longer employed there but would not comment on the circumstances of his departure.

Harvey apologized for the wording of his “war” tweet, but not for the sentiments it expressed about conservative Christians being the chief organizers behind the possible end of Roe. He noted that “progressive Christians” continue to support him and understand his message’s true intent.

As someone who spends much of his day dispelling Christian myths about Judaism that can play into antisemitic stereotypes, the rabbi does regret that the tweet he authored played into one.

“Unbeknownst to me, there is an apparently an antisemitic trope about Jews starting a race war,” he said. That trope is frequently employed by people affiliated with the Goyim Defense League, an increasingly visible and active white supremacist movement that stages public protests and distributes antisemitic literature in Jewish areas. 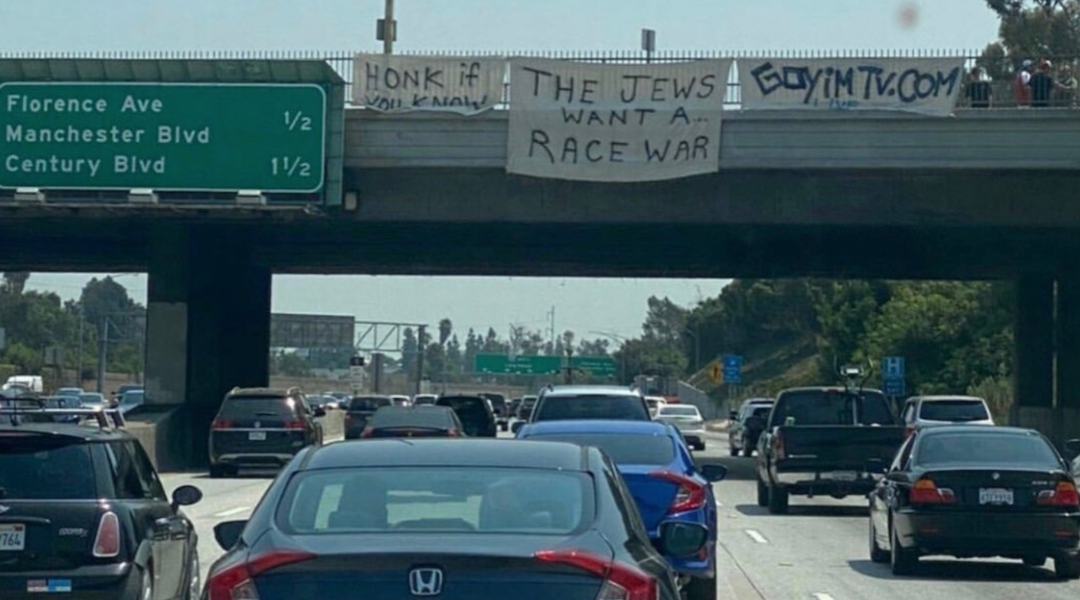 A banner displayed in California in 2020 was later determined to have been hung by members of the Goyim Defense League, a white supremacist group. (Siamak Kordestani/Twitter)

“If I had seen that tweet in a different context, and Mike and I were getting together, I would’ve said, ‘Mike, I wish you wouldn’t have said it that way,’” Bradley Pace, the local Episcopalian pastor who co-hosts the “Rabbi and Priest” events with Harvey, told JTA.

Pace said he hadn’t read the tweets himself but knew that Harvey had recently been targeted by white supremacists online and accepted his explanation that one was posted as the result of a hack.

But, he added, Harvey’s work building interfaith relationships should outweigh any objectionable tweets he sent: “He has a record of work here in the community that I would put up against anything he might have said on Twitter.”

Harvey has often taken the lead on interfaith issues that arise in their Indiana communities, Pace said. He recalled how, when the two men were congregational leaders together in West Lafayette, Harvey had organized a response to a spate of vandalism at a local Unitarian Universalist church.

Pace even wrote a blurb for Harvey’s upcoming book, saying that reading it has made him a better Christian. The book’s publisher, Fortress Press, is standing by Harvey and sticking with its July release date.

Harvey says he plans to return to Twitter in a few weeks, partially to help promote his book; he also says he has spoken to the FBI and the Anti-Defamation League about being targeted online. There’s a silver lining for him: As a result of the controversy, pre-orders of his book have skyrocketed. “Let’s Talk: A Rabbi Speaks to Christians” is currently Amazon’s #1 bestseller in the Christian Ecumenism category.

“As it turns out,” Harvey said, “there’s no such thing as bad press.”