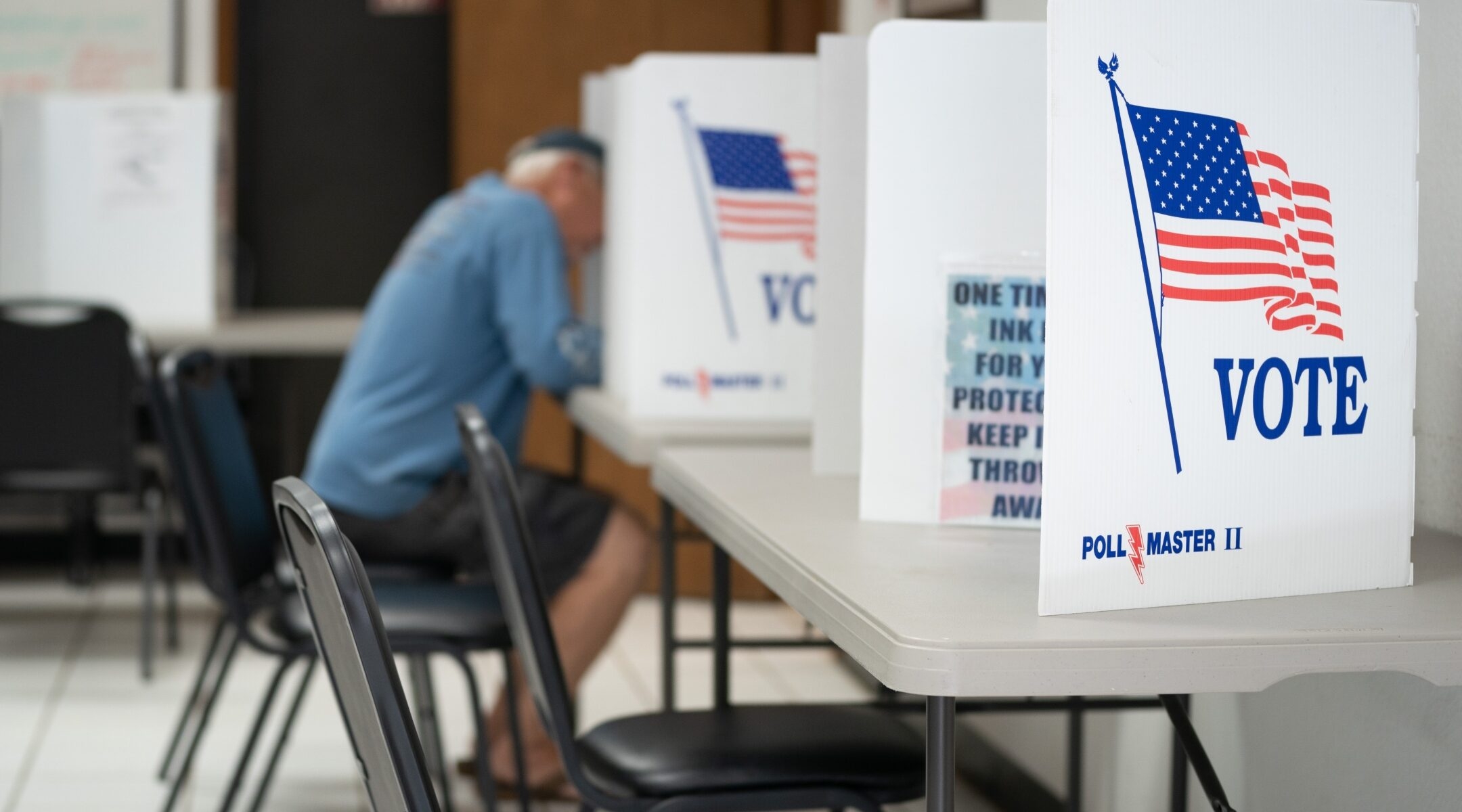 A man fills out a ballot at a voting booth in Mt. Gilead, North Carolina, May 17, 2022. (Sean Rayford/Getty Images)
Advertisement

In North Carolina, Don Davis won handily in the 1st District, in the state’s northeast, besting Erica Smith. In the 4th District in the state’s center, a state senator, Valerie Foushee, defeated Nida Allam, a Durham County commissioner who was the first Muslim woman elected to office in the state, 47% to 37%, with 84% of the vote counted.

Both races were to replace longtime Democrats who are retiring and were two of three closely watched in the pro-Israel community because of massive injections of cash by United Democracy Project, a so-called “super PAC” launched last year by AIPAC. The PAC targeted the races because Smith and Allam would have added to the contingent of congressional lawmakers who seek stricter oversight and limitations on defense aid for Israel.

The third race, in Pennsylvania’s newly drawn 12th District, was too close to call, with the United Democracy-backed candidate, Pittsburgh lawyer Steve Irwin, less than a percentage point behind State Rep. Summer Lee with 98% of the vote counted.

It’s not clear how much AIPAC’s support drove the outcomes, as both Davis and Foushee had support from the the local Democratic establishment and the cryptocurrency sector, which is seeking to deter congressional oversight, also poured money into the races.

But it’s clear that the pro-Israel funding, which also flowed to a lesser degree from a PAC associated with the group Democratic Majority for Israel, did register in the races. In the Pittsburgh-area district Lee was seen as the clear front-runner until she was hit by a barrage of negative ads paid for by United Democracy. And in North Carolina’s 4th District, the pro-Israel donations caused the state’s progressive caucus to rescind its endorsement of Foushee.

AIPAC said the wins and another backed by a conventional PAC it launched this year, AIPAC PAC, are proof that Democratic voters still lean pro-Israel, even as criticism of Israel and its policies has sharpened among Democrats in Washington, D.C.

The wins “over anti-Israel candidates send a strong message that the pro-Israel community will stand with those candidates who support the U.S.-Israel relationship. It also shows that the Democratic electorate stands with pro-Israel leaders,” AIPAC said.

The victories may help to offset some of the negative publicity the lobby has endured since announcing in December it was breaking with decades of staying above the fray and establishing political action committees.

Democrats are furious that AIPAC PAC has backed dozens of Republicans who refused to certify Joe Biden’s presidential election on Jan. 6, 2021, the day of a deadly insurrection aimed at keeping Congress from certifying the election. A number of Republicans have expressed frustration, meanwhile, that AIPAC PAC is backing Democrats who support the Iran nuclear deal, which AIPAC vehemently opposes.

Super PACs are political action committees that may accept unlimited funds, but must not directly coordinate with a campaign; they often attack an endorsed candidate’s opponents. United Democracy poured more than $2 million into each of the races, fueling negative ads against progressive rivals who were backed by groups that are frequently critical of Israel.

The vast majority of funding for United for Democracy has so far come from AIPAC itself.

Vermont Sen. Bernie Sanders, the Jewish de facto leader of progressives, filled his Twitter feed in recent days with calls to vote for Lee in Pittsburgh and Allam in North Carolina. He called on the Democratic Party to disallow Super PAC spending in primaries and complained that the mainstream media is ignoring “how billionaires, through AIPAC, are spending millions to defeat progressive candidates.” He also faulted the group’s targeting of “three women of color,” apparently referring to Smith, Allam and Lee. (Foushee is a Black woman and Davis is a Black man.)

AIPAC prides itself on grassroots fundraising, and emphasized that in tweet replies to Sanders.

“AIPAC, and our 1.6 million grassroots members, proudly exercise our civic and democratic rights to participate in the political process,” AIPAC said. “By helping elect pro-Israel leaders — including pro-Israel progressive women of color — we advance America’s interests and values.”

The political action committee affiliated with J Street, the progressive Israel lobby, was backing Lee and Smith. David Price, the North Carolina representative whom Foushee and Allam were running to replace, along with former “American Idol” finalist Clay Aiken, was affiliated with J Street and led a congressional tour of Israel for the group earlier this year.