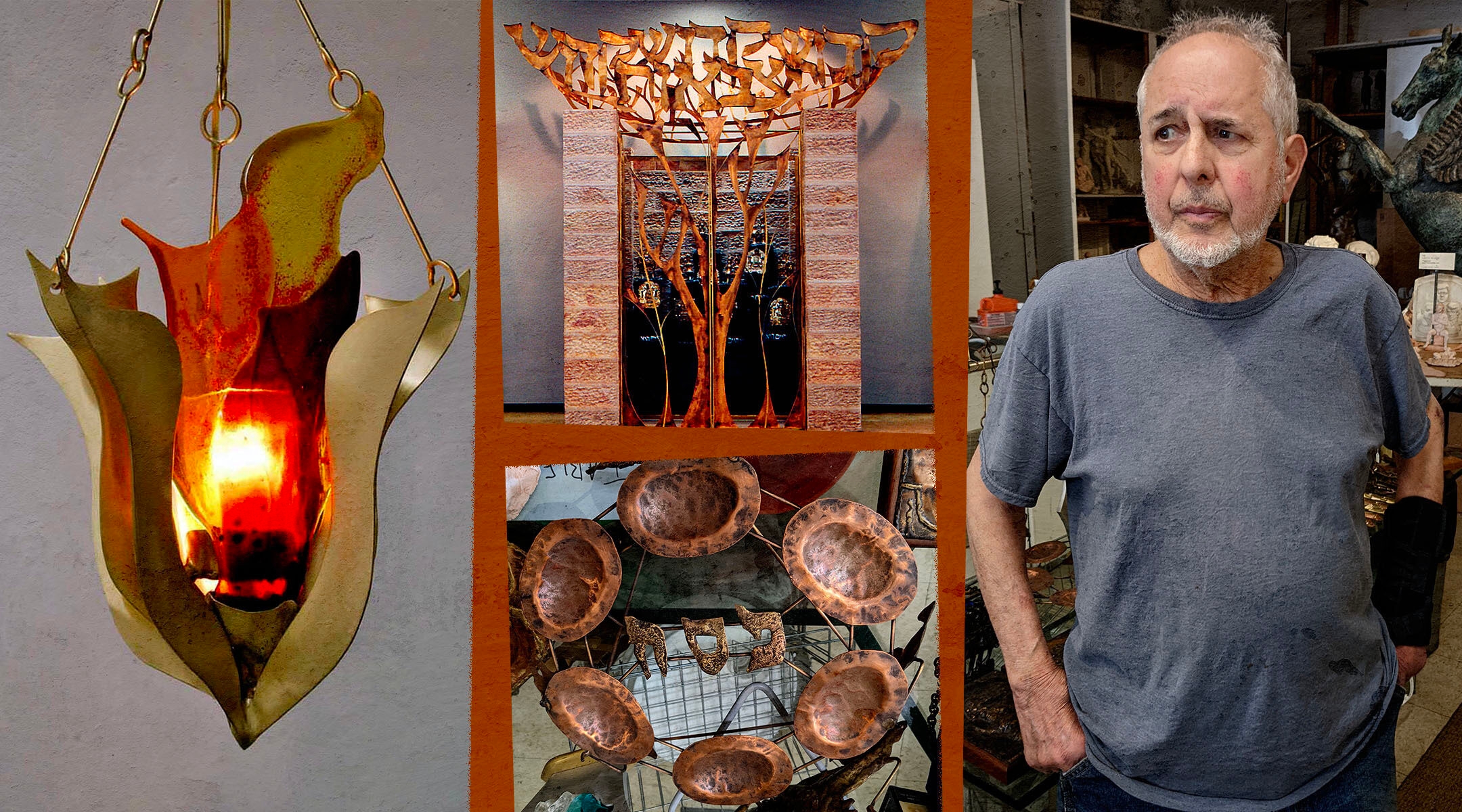 Artist and welder David Klass is shown with examples of his Judaica, including, clockwise from far left, an eternal light, a synagogue ark and a seder plate. (Author photo and seder plate: Jon Kalish, other images courtesy David Klass)
Advertisement

(New York Jewish Week) — The sculptor David Klass recently surveyed his 4,200-square-foot Chelsea loft, which has nearly 12-foot ceilings and is filled with blow torches and other welding tools, busts, reliefs and lots of finished sculptures, including a life-size metal horse with wings. He has filled up practically every inch of his live-work space, and now the artist was pondering an unpleasant question: How does it feel to be moving?

“Terrible,” the soft-spoken 81-year-old replied before quickly adding that there was one upside to vacating the premises. He was getting out of a building that had become “infested with lawyers and stock market people.”

It is here in Chelsea that Klass has been making Jewish liturgical art for 46 years. His Torah arks, eternal lights, menorahs, trees of life and custom signage grace synagogues across the United States. He has also done numerous projects with Levin/Brown & Associates, an architecture firm based in Owings Mills, Maryland, that has designed 160 synagogues. In 2003, the large ark he created for Temple Oheb Shalom in Baltimore won an award for religious arts and liturgical furnishings from the Interfaith Forum on Religion, Art & Architecture, a group attached to the American Institute of Architects.

“David is the consummate metal artist,” said Mark Levin, co-founder of the firm. “David can do anything you ask. He’s made a significant contribution to Judaic art and to the Jewish world. He has left an indelible mark on the Jewish diaspora.”

But now he is bidding farewell to a city he can no longer afford. Klass plans to relocate to upstate New York or New Jersey, hopefully someplace within 90 minutes of Manhattan, and carry on his work there. It’s a bittersweet exodus.

“I’m acknowledging the fact that I’m getting older and my physical abilities are not what they used to be,” Klass told the New York Jewish Week. “I need to do smaller projects. I’m not doing 12-foot ark doors [any more] and no trees of life.”

Klass has called Chelsea home since 1976. When he first arrived in the neighborhood, now a mecca for shoppers and high-end gallery hoppers, Chelsea was “the Wild West,” he said. Billy’s Topless Bar occupied the corner of 24th Street and Sixth Avenue and a portable bordello that was run out of a van made stops on his block. One of the neighbors in his building was armed with “various weaponry,” he recalled. 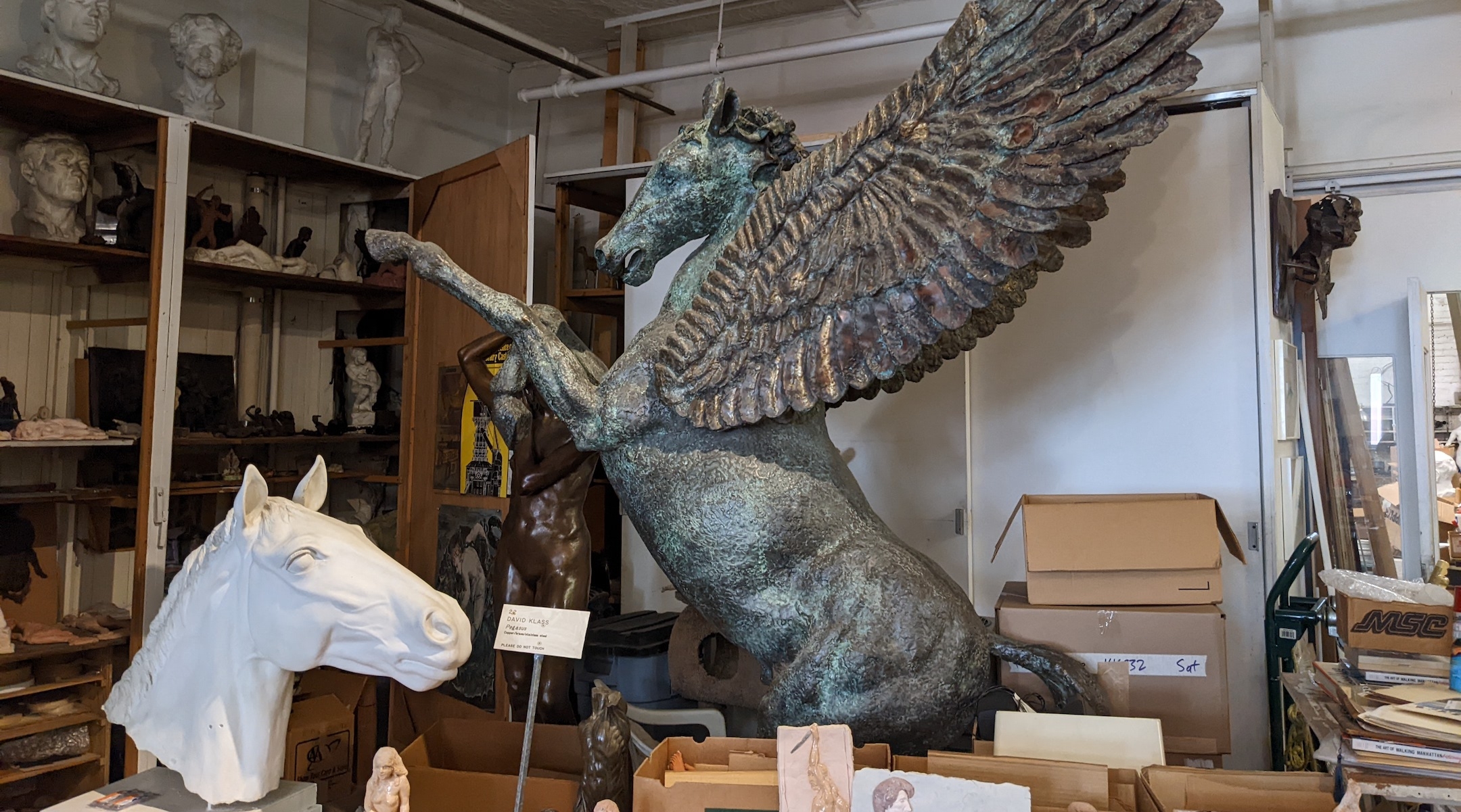 Two of the works in David Klass’ Chelsea loft were inspired in part by the building’s previous life as a stable for horses. (Jon Kalish)

In the 1980s, the parking lots on Sixth Avenue sprouted flea markets every weekend. By the 2000s, they were all  converted into high-rise luxury apartments. Klass said he’s not going to miss the neighborhood.

His building was built as a stable for draft horses in the 19th century, and its legacy lives on in the life-size horses he created in 1990 for the Metropolitan Museum of Art’s Arms and Armor division. The sculptor shelled out $100 an hour to have a live horse from a midtown stable model for the sculpture in his studio. The horse was inside his ground-floor loft for a total of 30 hours.

The Met cast two copies of the finished work, which are currently used to display Japanese and Chinese armor trappings.

But the pandemic has been painful for his art business. “For two years, I wasn’t getting any inquiries for work,” he lamented. “Nobody was contacting me.”

He now senses that people are going back to synagogue, because inquiries for new commissions have started to roll in. 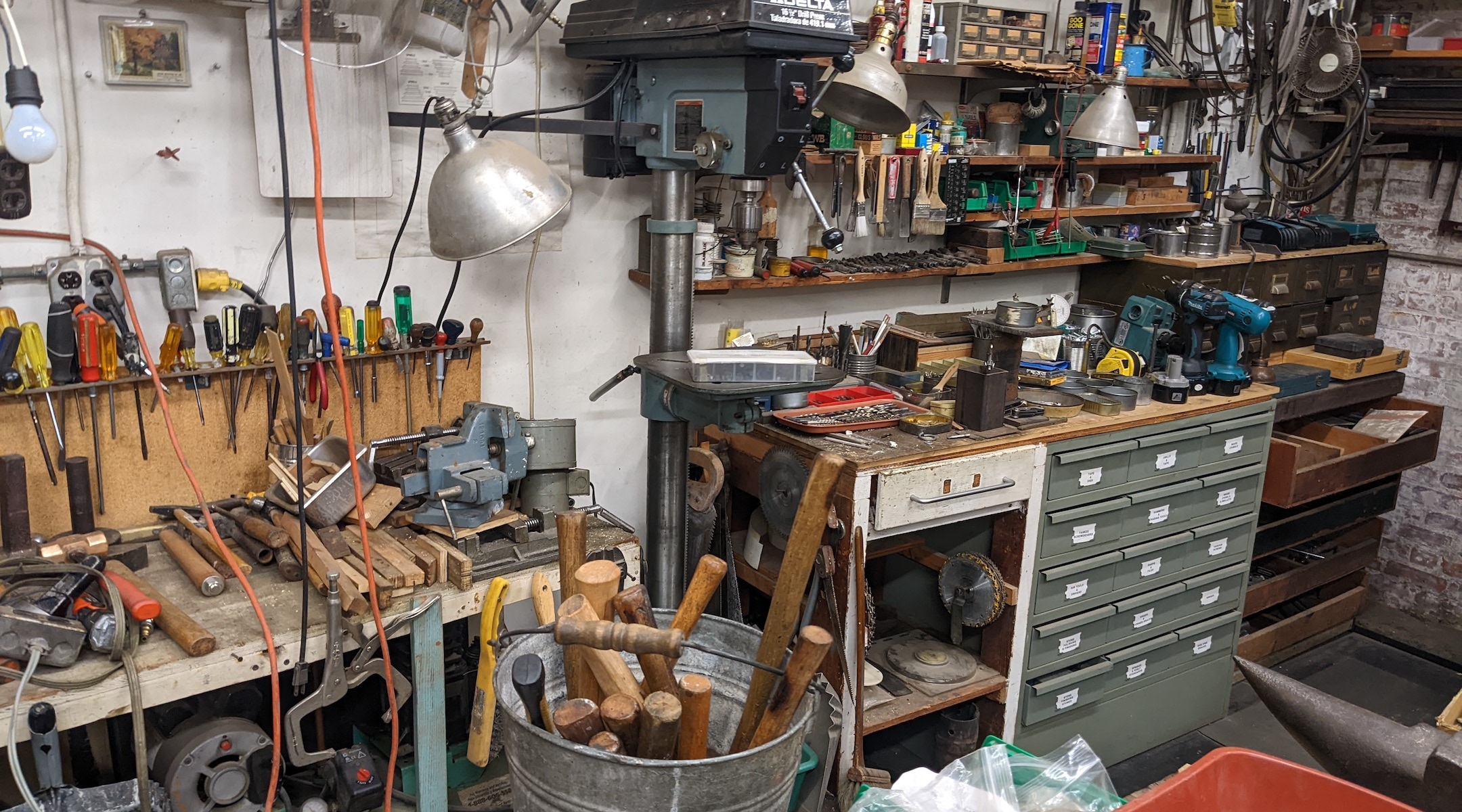 “But I have to tell people we’re relocating and we haven’t set up [my new studio] yet and they say, ‘Well, we can’t wait,’” Klass said.

Klass and his wife Naomi do not have an enviable task. They need to move a complete welding shop and numerous sculptures out of the cavernous loft by mid-July. The job includes transporting an unfinished sculpture in the form of a six-foot-tall, 3,500-lb. block of marble currently residing in their backyard. They hope to lighten the load with a moving sale. Passersby to their West 24th Street loft have been coming in to check out sculpture tools, art supplies and furniture.

In addition to art commissions, Klass does small welding jobs. His career as a fabricator began at an early age: As a kid growing up in East Paterson, New Jersey, he built treehouses. Later, he took a welding class in college in order to rebuild his Austin-Healey sports car. Today Klass is considered a master welder.

After graduating from Pratt Institute, he worked as an assistant to a sculptor named Harold Sklar, who asked him to finish an eternal light for Ben Ari Arts, a Lower East Side Judaica store that closed in 2014. It took an eternity, it seemed, for Sklar to finish the lamp, a symbol meant to hang above the ark in a synagogue. The owner complained about the late delivery, and asked Klass if he’d like to start making Jewish religious objects for the store. Klass agreed, launching his career in Judaica.

One of his favorite art works is a Holocaust memorial he created for the Jewish Community Center of Rochester, New York. The 10-foot tall sculpture made of copper and brass is accompanied by the Hebrew word “zachor” (remember) on the building wall behind it. The memorial consists of a six-branch menorah whose base is surrounded by barbed wire. On Yom Hashoah, or Holocaust Remembrance Day, the menorah’s four-inch cups are filled with oil and big flames flicker during a memorial ceremony.

Klass is also fond of an eternal flame he made for Santa Clara Synagogue in Cuba. The glass and brass piece has been admired by other synagogues, and some have requested replicas.

“I must have made a dozen or more of them in different sizes, with different colored glass,” he said. 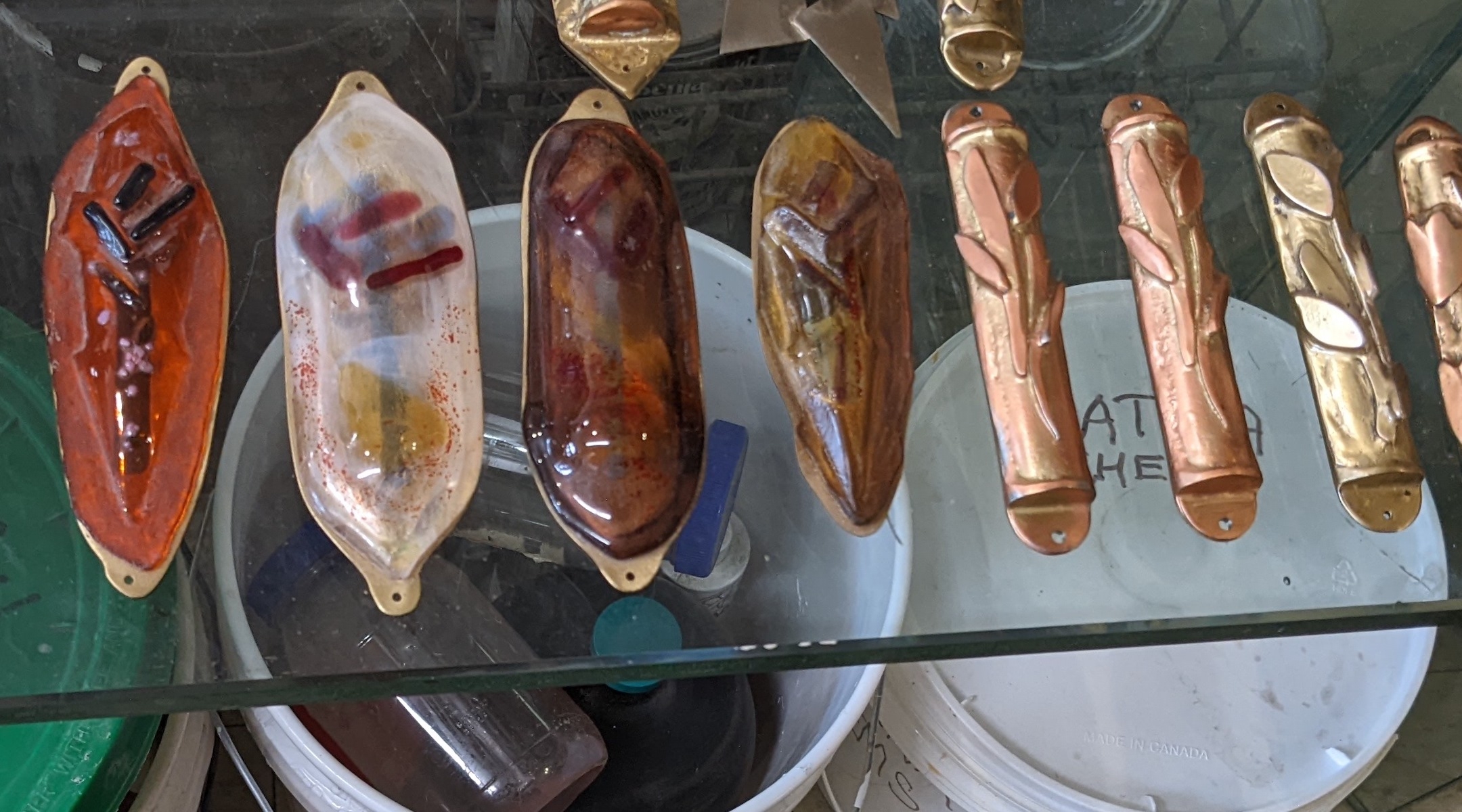 David Klass’ mezuzahs show his facility both with glass and metalwork. (Jon Kalish)

Klass is part of a prominent Jewish family. His uncles Sholom, Anshel and Leibel Klass were all ordained Orthodox rabbis who founded the Jewish Press, the conservative tabloid that serves New York City’s Orthodox community. Sholom Klass, who died in 2000, wrote a three-volume work on Jewish law titled “Responsa of Modern Judaism.” But David Klass’ father, Sol, was an ardent Zionist who left observant Judaism.

Klass’ grandfather did not take kindly to those who left “the derech” — the Orthodox path — and guilt-tripped his grandson when he did. Although Klass’ wedding with Naomi took place at an Orthodox synagogue in Chelsea, he describes his wife as less observant than he is — she has no desire to observe Hanukkah. So, yes: The artist who makes high-end, one-of-a-kind menorahs that sell for more than $1,000 doesn’t light candles on the Festival of Lights.

“Do I have any feelings of guilt about coming from a rather prominent Jewish family that has lots of rabbis and is quite active in their faith?” he asked. “Yeah, somewhat. But I feel that [my liturgical art] fulfills that mission.”

Klass was adamant, however, that his work isn’t a spiritual calling.

“I don’t have that connection,” he insisted.

He paused for a moment and conceded that, sometimes, he talks to God.