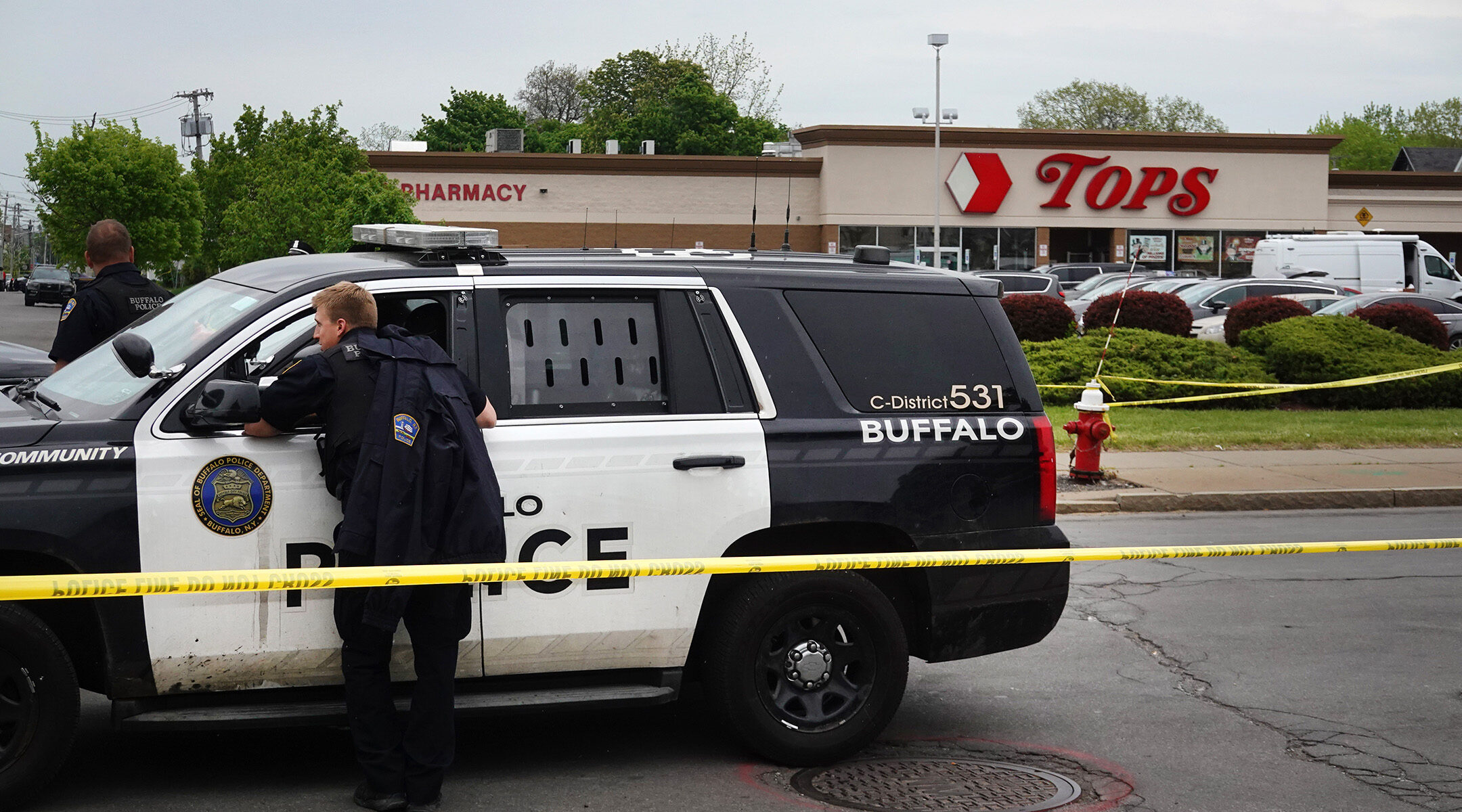 Police and FBI agents continue their investigation of the shooting at Tops Market on May 16, 2022 in Buffalo, New York. A gunman opened fire at the store killing ten people and wounding another three. The attack was believed to be motivated by racial hatred. (Photo by Scott Olson/Getty Images)
Advertisement

(New York Jewish Week) — The Anti-Defamation League and the Community Security Initiative are calling for concrete action in the face of rising extremism and antisemitic hate crimes in New York.

In a report released Wednesday, the two groups urged state officials and Gov. Kathy Hochul to double funding to the New York Hate Crimes Grant Program from $25 million to $50 million. This will fund training and equipment to secure an additional 1,000 facilities across the state.

“Now we have an opportunity to urge our lawmakers and community leaders to take action to stop hateful, violent acts from reoccurring in our state,” Scott Richman, the ADL’s New York/New Jersey regional director, said in a press release.

The report, titled “Hate in the Empire State: Extremism & Antisemitism in New York,” and written by Rebecca Federman, CSI’s threat intelligence analyst, culls statistics on increasing extremism within the state from January 2020 to December 2021.

The report shows that reported hate crimes in New York City rose 196 percent from 2020 to 2021, with Jews as the most targeted group, accounting for 40 percent of the hate crimes. This included 51 assaults motivated by anti-Jewish bias, the highest number ever recorded by ADL in New York.

🚨 NEW REPORT 🚨
The #Buffalo shooting by a white supremacist was the latest example of hate in the Empire State. Our experts identified a myriad of extremist movements active in New York and found that NY leads the nation in antisemitic incidents. ➡️ https://t.co/jbspAYIY49 pic.twitter.com/c9AumZVA4b

New York state also leads the nation in antisemitic incidents with a 24 percent increase in 2021.

Richman said the report not only sheds light on antisemitism, but uncovers the prevalence of conspiracy theories such as one that inspired the racist shooting in Buffalo last month, in which 10 Black people were murdered.

“As someone who has been on the ground in Buffalo in the days since the attack, it pains me deeply to see how our Black neighbors have suffered from this extremism,” Richman said.

The state had the fourth highest number of people arrested for participating in the Capitol insurrection on Jan. 6, 2021, with 58 New York residents arrested and charged in its wake.

The report’s other recommendations include dedicated extremism monitoring desks at all of New York State’s relevant offices, a new interagency “Commission on Antisemitism” and an annual threat report detailing domestic violent extremism.