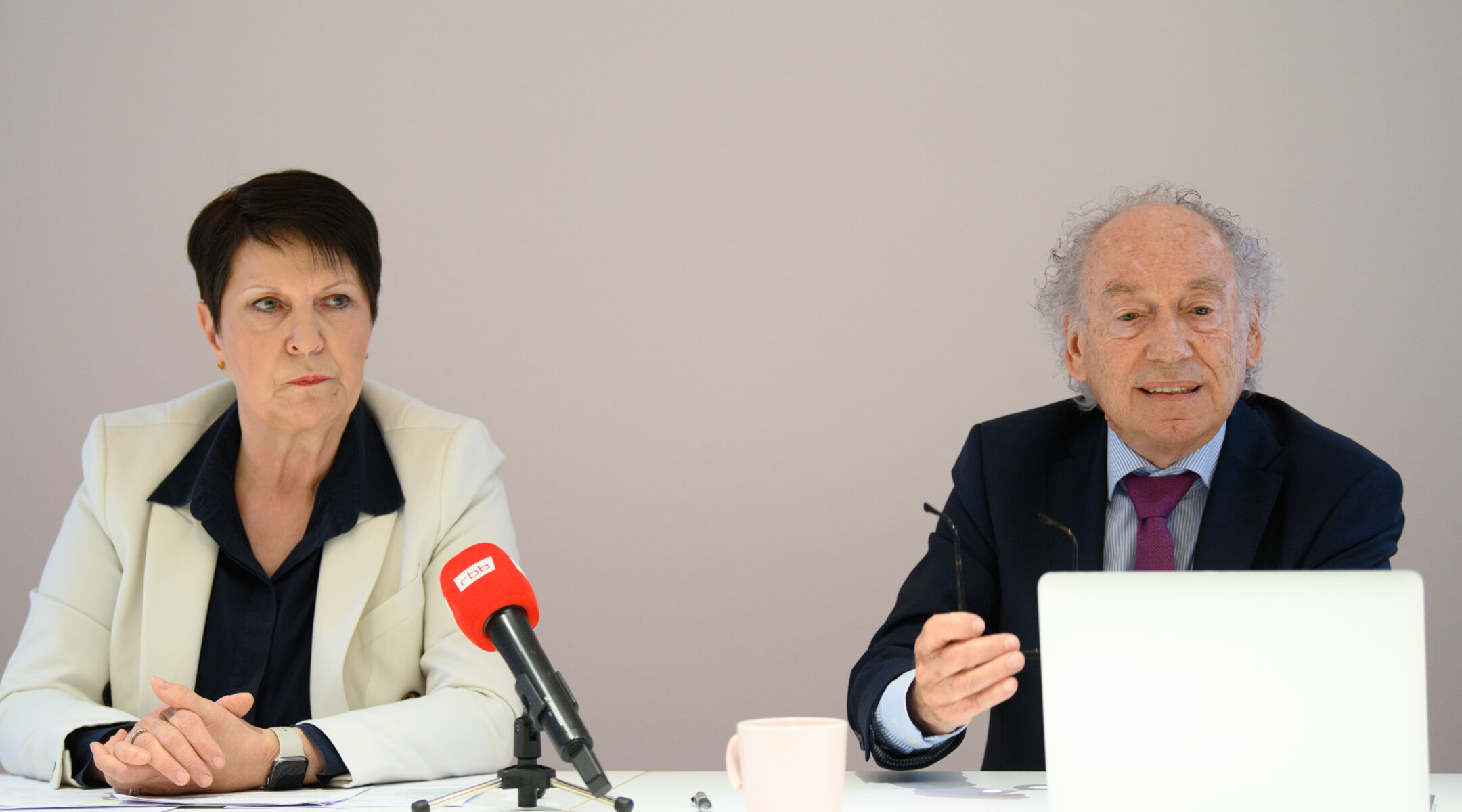 Attorney Gabriele Thöne, interim director of the Abraham Geiger College and former state secretary, and attorney Micha Guttmann, photographed during a press conference about allegations of sexual harassment against the director of the college, in Potsdam, Germany, June 1, 2022. (Soeren Stache/picture alliance via Getty Images)
Advertisement

(JTA) — The interim head of Germany’s Abraham Geiger College rabbinical seminary said she is committed to a thorough investigation of the institution, which is currently wrapped in a cloud of controversy, and potentially to seeing it restructured.

But Gabriele Thöne, a former government official who is steering the 23-year-old school while multiple investigations are underway, would not say whether she sees a place in the seminary’s future for its founder and rector, Rabbi Walter Homolka.

Homolka has been on leave since early May, when allegations of sexual harassment and abuse of power against him and another employee broke into public view.

At a press conference Wednesday organized by the seminary’s legal counsel, Thöne said it was important to determine whether any abuses of power were related to individuals or were a systemic problem. She said her door was open to students and others who wish to lodge complaints. So far, she was aware of four specific cases, according to news reports.

Two official inquiries are underway: The University of Potsdam, which houses the seminary, expects its investigation to conclude in August, while a newly announced probe by the Central Council of Jews in Germany — a funder of the rabbinical school — will likely conclude in early 2023.

Several people told the Jewish Telegraphic Agency they had already spoken with one of the two investigative panels or were scheduled to do so in the coming weeks.

The head of the Central Council said he remains concerned about the school’s operations in the wake of the allegations.

“It is questionable whether the reorganization that has now been initiated at the Abraham Geiger College is suitable and expedient,” President Josef Schuster told the German Press Agency. “The previous rector is merely letting his offices rest and the people in responsible positions are the same as before. Under these circumstances, a reorganization hardly seems possible.” Rabbi Walter Homolka. at left, with other leaders of Germany Jewry including Josef Schuster, president of the Central Council of Jews in Germany, at far right, at an event in October 2019. (Wolfgang Kumm/picture alliance via Getty Images)

Graduates of the seminary, which has ordained 41 rabbis working across Europe and beyond, issued a statement saying they were ready “to participate in the ongoing investigations” and offering to assist current students and members of Jewish communities “as interlocutors and pastoral counselors.”

Signed by 22 rabbis, the statement said that this might be the time to “change processes, structures, modes of communication and staffing.” The alumni said they wanted to support their alma mater, which had “created opportunities for women, for people with different sexual orientations and for converts” to study for the rabbinate and be ordained.

Meanwhile, a mystery is swirling around an open letter purporting to be from current students was distributed to media, including JTA, earlier this week. The letter called for Jewish leaders in Germany and abroad “to step up in this vital moment and save the future of Jewish leadership in the Liberal communities in Germany,” but some students whose names appeared on the letter said they did not sign the document.

Homolka, who has kept a low profile since the scandal broke, told the newspaper Die Zeit — in an article published Wednesday — that “just because someone has responsibility and power does not mean they also abuse” their role. “Decisions were not made unilaterally at the college,” he said.

“Consensus is the ultimate objective,” Homolka continued. “Also in my role as chair of the Union of Progressive Jews in Germany, I have worked for years with four members of the board and a secretary general – majorities are important, as is inclusion of everyone.”

That body issued its own statement Wednesday defending Homolka and the seminary, “strongly condemning” a second report in Die Welt, the German newspaper that first broke the story, comparing the school to a “Potemkin village,” a façade behind which there is no substance.

The seminary is “indispensable for the preservation and future of liberal Judaism in Germany, Europe and the successor states of the Soviet Union,” the statement said.