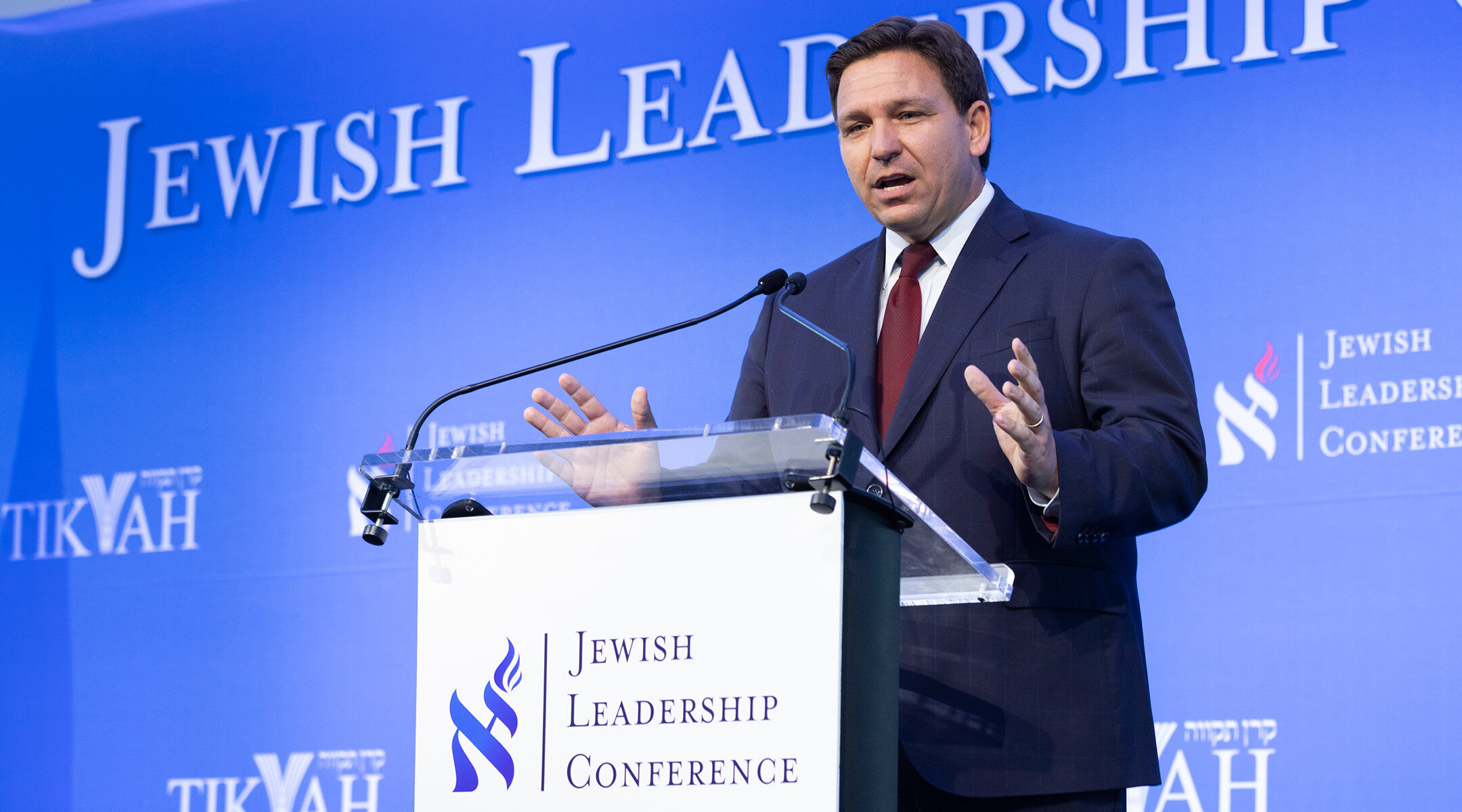 (New York Jewish Week) — Florida Gov. Ron DeSantis spoke about the success of the Jewish community in the Sunshine State and the need to fight “wokeness” in an address to a conservative Jewish group in New York City on Sunday.

“They can’t cancel me,” the Republican governor began his speech, delivered before an audience of approximately 700 at the Tikvah Fund’s Jewish Leadership Conference, held at Chelsea Piers. “I’m gonna speak my mind. When the left is having a spasm, that just tells you that in Florida we are winning.”

DeSantis, the final speaker at the daylong conference, was referencing last month’s controversy, when the Tikvah Fund said the Museum of Jewish Heritage in Lower Manhattan canceled its contract to hold the conference there. Tikvah said the museum told them that a talk by DeSantis, who had recently signed legislation that prohibited classroom discussion of gender identity and sexual orientation for some age groups in Florida schools, did not “align with the museum’s values”; the museum disputed Tikvah’s version of the events but not the cancellation.

DeSantis referred to the gender identity bill in his remarks Sunday. “Every parent in the state of Florida has a right to send their kid to elementary school without having concepts like woke gender ideology jammed into their curriculum,” DeSantis said.

He also said that children should be able to go to school without teachers “transitioning their kids’ gender to a different gender, giving them a different name, having them wear different clothes without the parents’ knowledge and consent.”

In an op-ed about the cancelled event, Tikvah said it had invited DeSantis because of policies in Florida that had encouraged the growth of the state’s Jewish community, including low taxes and public funding for parochial schooling.

Elliot Abrams, the former deputy national security advisor and chairman of the Tikvah Fund, told the New York Jewish Week that the Jewish community of Florida “is a great story.”

“Not only is the population of Florida growing, but the Jewish community is thriving,” Abrams said. “[Desantis] has a lot to be proud of when it comes to that.”

Outside the venue, several dozen demonstrators from progressive groups, including members of Jews for Economic & Racial Justice, protested his appearance. Chelsea Piers also faced backlash from politicians and activists who denounced the venue for allowing DeSantis to speak there.

Rich Ferraro, a spokesman for LGBTQ advocacy group GLAAD, told the New York Times that the organization would “refrain from future events” at the venue. The Ali Forney Center, which works with homeless LGBTQ youth in New York, also canceled a program at the venue next month.

In a statement released on Friday, the venue said that it “could not disagree more strongly with many of Ron DeSantis’ actions in office.”

“Pier Sixty will direct every dollar it receives from Tikvah to groups that protect LGBTQ+ communities and foster and amplify productive debates about LGBTQ+ issues,” the statement said.

Protesters noted that DeSantis was speaking in New York during Pride Month and on the six-year anniversary of the shooting at Pulse, a gay club in Orlando, in which 49 people were murdered.

Joseph Kleinplatz, a protester who referred to the Florida governor as “DeSatan,” told the New York Jewish Week that it’s “wrong” to have him in the city. “The Jewish religion is not about hate,” he said.

‘We are not going to teach our kids to hate our country,’ he said. pic.twitter.com/a8wLVIvVBs

“Not just discourse, but policies that actually harm young people in particular,” Archilla said. “We are here to denounce the willingness to legitimize policymaking and discuss how that is harmful to transgender communities and LGBTQ people.”

In a speech interrupted by frequent applause, DeSantis addressed the protestors and the museum flap, saying that he had heard that there was “a little opposition to me coming here.”

“I’m not going to let some protests deter me from coming to speak in front of a lot of future voters in Florida,” he said.

DeSantis boasted about the education bill he signed in March, which his administration calls the “Parental Rights in Education” bill and which critics call the “Don’t Say Gay” bill. His administration has also sought to ban transition-related care for transgender minors and Medicaid coverage for medical procedures related to gender reassignment.

In his speech, DeSantis called wokeness “a cancer” that will ultimately destroy the U.S. and vowed that Florida would never be “overrun” by an ideology that he has described elsewhere as “teaching kids to hate our country” and forcing employees to “endure” training in Critical Race Theory.

“You can have differences in political judgments, but if they have an ideology that expects me to believe that a man can get pregnant, that doesn’t work for me,” he said.

DeSantis spoke highly of the Florida Jewish community, and singled out legislation he signed in 2019 to “make sure that institutions like our state universities are treating antisemitism the same way they treat racism.”

He also talked about enacting Holocaust education requirements, authorizing the Orthodox-run ambulance corps Hatzalah to provide emergency services and leading a trade mission to Israel. “Apparently that’s the type of record that gets you banned from speaking at a Holocaust museum,” DeSantis quipped.

Desantis talks about a man getting pregnant and says ‘that doesn’t work for me.’ pic.twitter.com/3sbXkBdldy

“We will not step aside because a few radical protesters aided by the media prefer disruption to conversation, accusations over ideas, threats over debates,” Cohen said.

The Tikvah conference included among its speakers the writer Bari Weiss, former Israeli Ambassador to the United Sates Ron Dermer and former Secretary of State Mike Pompeo. Panel discussions addressed topics such as “How To Fight Back Against Wokeness” and “What Every Young Jew Needs to Know about Western Civilization.”

DeSantis is often spoken about as a contender for the Republican presidential nomination in 2024. Daniel Wanders, an attendee of the conference who flew in from Chicago, told the New York Jewish Week that DeSantis is a “very smart and charismatic guy.”

“I think that he’ll be very tough to beat in 2024 and he clearly has those ambitions,” Wanders said. “He’s fighting an ideology that I think most people here in this room are very concerned about.”