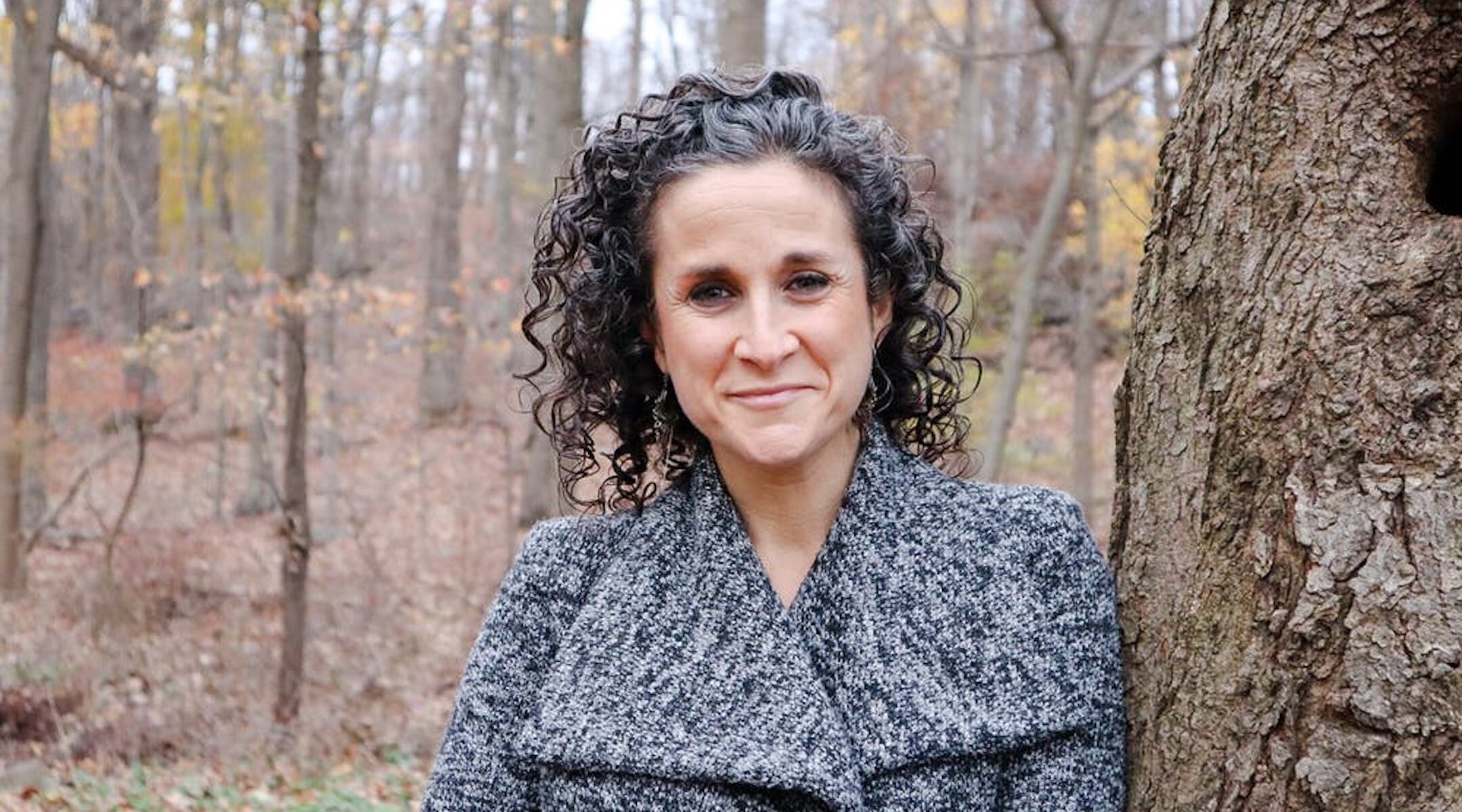 The daughter of a cantor and raised in Los Angeles and Baltimore, Dardashti has been working as the associate chaplain at Brown University and Rabbi at Brown Rhode Island School of Design Hillel since 2013. Feeling at home in Providence, Rhode Island, she had found her dream job working with a diverse, challenging, pluralistic group of energetic young people.

But her husband, Nathan Sher, was commuting back and forth to New York City four days a week — a three-and-a-half-hour drive from Providence. What’s more, the local Jewish day school ended after fifth grade, and the couple wanted a Jewish education for their three children, ages 12, 10 and 6.

Meanwhile, in the Cobble Hill neighborhood of Brooklyn, the rabbinic search committee at the historic Kane Street Synagogue was preparing to enter its second year of searching for a rabbi. In 2021, Rabbi Samuel Weintraub retired after 25 years at the synagogue. The committee had already had other finalists fall through and was getting desperate to find someone who would breathe life back into the congregation and revitalize the community after slogging through the slow pandemic years.

“Like many organizations, we have silos of different groups and we wanted someone who could bring those together and make everyone feel like they’re part of one community,” said Andrea Glick, who was the co-chair of the rabbinic search committee.

Dardashti and her husband had by this time decided to spend a year in Jerusalem. But when a friend reached out, asking if she would consider looking at the questionnaire the rabbinic search committee had prepared.

“We were pretty sure we were going to Jerusalem. But I said, ‘Sure, I’ll explore it,’” Dardashti explained. “It was shocking. I checked out their questionnaire and I spoke to their search committee chairs and I was like, ‘This feels amazing.’”

Dardashti met with the search committee in late January, and by early March, an announcement went out to the community announcing her appointment as senior rabbi. She begins her tenure on August 1.

“It was quite a feeling of bashert-ness,” she added, using a Yiddish word meaning “fated.” “As much as we were excited to go to Jerusalem, my husband and I felt like this was an opportunity that felt so right — to us and to them — that we couldn’t let it pass us by.”

Dardashti, 41, will rely on her experience at Brown RISD Hillel —  where she started the Narrow Bridge Project, a program that allows Jewish students from all political leanings to discuss the past, present and future of Judaism and Zionism — to build a strong community base at Kane Street. Calling herself a “radical pluralist,” she stressed the importance of living and working in a place that embraces more than one kind of Judaism. Dardashti walks the walk when it comes to pluralism: Ordained as a Conservative rabbi at the Jewish Theological Seminary, she belonged to both a Modern Orthodox synagogue and a Conservative one in Providence, and often attended a Renewal minyan as well.

A number of factors at Kane Street drew Dardashti in, including the potential of current staff — a new executive director and liturgical director both started in 2019, joining Rabbi Valerie Lieber, who has been directing the Hebrew school at Kane Street for more than a decade. “I’m thrilled to be joining such a talented cadre of Brooklyn rabbinical and cantorial colleagues,” Dardashti said.

“They really seemed to have been through an introspective process, where they understood that they need to hold on to a lot of what has made Kane Street Kane Street forever and continue to hold tight to certain traditions and to the strong spirit of lay leadership that they’ve had, but also figure out how to leverage all of that to move forward,” she added. Kane Street Synagogue in Cobble Hill is known as “The Mother Synagogue” of Brooklyn — the oldest Jewish congregation serving the Brooklyn neighborhood in which it was founded, with roots dating back to 1856. (Ramin Talaie)

As for Kane Street, the feeling among the rabbinic committee is relief — and genuine excitement.

“Finding Rabbi Dardashti was kind of a spiritual moment in and of itself,” said Danny Tamman, who served as a member of rabbinic search committee and has been a member of the synagogue for 10 years, along with his wife and three daughters. “With regards to her spirituality, her effusiveness, and her outgoing nature, she makes an impact. It’s precisely what the synagogue needs right now.”

The committee was also looking for a leader who was passionate about teaching and leading prayer. “We felt like our services needed some new energy and new thinking,” Glick added. “Our DNA is people who really want to learn about Judaism who really want to deepen their knowledge, and we wanted to reinvigorate that.”

In the last few decades, changing demographics of Brownstone Brooklyn and Kane Street have meant the congregation is aiming to embrace “Jews-by-choice (converts), interfaith families, Jews who are returning to their roots, and Jews re-discovering their faith and culture” as well as LGBTQ members, per their website.

According to Glick, Kane Street serves a spectrum of ages and religious affiliations. However, “the one group we don’t have is people in their 20s,” she said. It was important to Kane Street to have a leader that could speak to every group.

“When I talk about silos, I mean that sometimes the young parents are all together and sometimes the older people are together and then there’s the people who go to shul every Shabbat,” Glick explained. “People often gravitate toward other people like them. But we wanted someone who can give us all a sense of being part of one community.”

Kane Street has roots dating back to 1856, when it became known as “The Mother Synagogue of Brooklyn” — the oldest Jewish congregation serving the Brooklyn neighborhood in which it was founded. The congregation moved to its current building in 1905. In the 1960s and ’70s, as core members moved to the suburbs, Kane Street shifted its practices to serve the changing demographics of the neighborhood, such as embracing more women in leadership roles. Nominally Orthodox in practice, the congregation began to align itself with the more liberal Conservative movement. Rabbi Debra Cantor became the congregation’s first woman rabbi in 1988.

Tamman, who grew up attending a Sephardic synagogue in the United Kingdom, said that Kane Street is facing a similar turning point today. Membership is changing, Brooklyn’s Jewish community is becoming more diverse, and Kane Street wanted to find a rabbi that could meet the shifting needs of the greater Brooklyn community.

“Almost every shul in the country has the same challenge: to figure out how to be the beating heart of the community,” said Joey Weisenberg, who served as the synagogue’s musical director from 2007 to 2014 and who returns every year to lead High Holiday services. “One of the ways Kane Street has survived for so long is by deliberating carefully and changing slowly, but still responding in real time to the concerns of the community and creating a sense of pulsing energy.”

Weisenberg, who called Dardashti’s appointment as senior rabbi a “great shidduch” (match), said he felt a generational shift happening as members who revitalized the community in the 1970s pass the baton to younger members.

Dardashti has worked as a congregational pulpit rabbi before, although never as a senior rabbi. After her ordination in 2010, she was a Marshall T. Meyer Fellow at B’nai Jeshurun, the powerhouse synagogue on the Upper West Side. “There’s nothing that I could imagine that would be so wonderful to get to do starting out as a rabbi. It was such invaluable training,” she recalled of the experience. She then worked as the director of community engagement at Temple Beth El in Stamford, Connecticut, before beginning her dual appointment at Brown University and Brown RISD Hillel.

Growing up, Dardashti had no plans to become a rabbi, although she was deeply steeped in her family’s eclectic Jewish identity. Raised by singers — her father from Iran and her mother from Queens — the Dardashti family performed as a singing group at Jewish festivals and institutions throughout her childhood. (Her sister, Galeet Dardashti, leads the all-woman Mizrahi/Sephardi ensemble Divahn, and her father is Hazzan Emeritus at Beth El Synagogue Center in New Rochelle, NY.)

After graduating from Binghamton University, Dardashti moved to Uruguay, where she freelanced for the Jewish Telegraphic Agency (the New York Jewish Week’s sister site) and volunteered at a local Hillel. While deferring from her planned path of going to law school, she lived in Israel as part of the Dorot Fellowship and the Nesiya Institute, training programs for budding Diaspora Jewish leaders.

At Kane Street Synagogue, she looks forward to building community with those who sometimes find themselves on the fringes of congregational communities.

Of course, the move to the tree-lined streets of Brownstone Brooklyn was also a huge draw for Dardashti and her family. “There’s just so much going on Jewishly, artistically, intellectually and spiritually,” she said. “I love not being the only exciting thing going on Jewishly, and I love the idea of being able to collaborate and build and dream in a playground of so much bounty and such fabulous clergy colleagues.”

“[Brooklyn] is vibrant, alive, and oozing with potential. There are so many interesting and interested Jews,” she added.

Reaching out to as-of-yet unaffiliated Brooklyn Jews is one of Kane Street’s goals. “There are a lot of people in Brooklyn who are not connected to Judaism in any formal way. We think a lot of those people would really like Kane Street, so we wanted someone who could reach those people as well,” Glick explained.

For Tamman, it was Dardashti’s ability to make Judaism accessible to anyone that made her the right fit for Kane Street going forward. “Whether you’re Jewish or haven’t been very involved, if you have roots in the neighborhood or are thinking about having kids here, we wanted to have a place for you here at the synagogue,” he said.

Dardashti plans to create that place. “This job at Kane Street feels like a fantastic fit. It feels like the perfect moment, location and role for me at this stage of my career and my family’s stage of life,” she said.