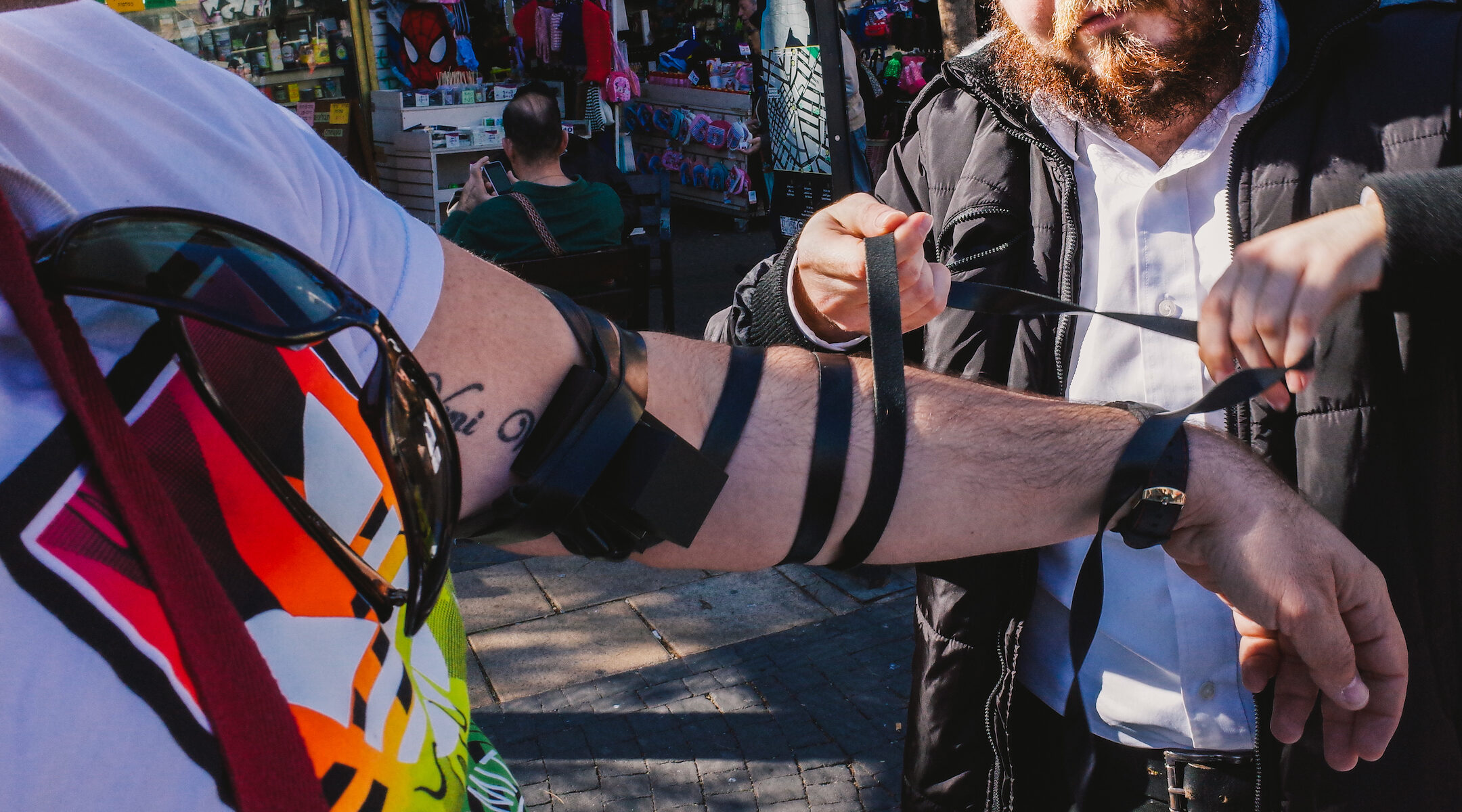 (JTA) — There is an old joke about the Jewish atheist who is excited to meet the Great Heretic of Prague. He arrives at the great man’s house on a Friday night, and is immediately told to shush while the Heretic lights Shabbat candles. Then they sit down for the Shabbat meal, during which the Heretic says the motzi over the bread and the kiddush over the wine.

The atheist visitor can’t take it anymore. “You’re the Great Heretic of Prague and you follow the Shabbat commandments!?”

The joke is about the gap between Jewish belief and Jewish practice, and the old chestnut that belief in God is less important to a religious Jew than performing the mitzvot, the commandments. In truth, the most observant Jews tend to be the most God-fearing, but the joke celebrates a worldview that I only recently learned actually has a name: fictionalism.

Fictionalism, according to the philosophy professor Scott Hershovitz, means pretending to follow a set of beliefs in order to reap the benefits of a set of actions. In a recent New York Times essay, he asks why he continues to fast on Yom Kippur and observe Passover when he doesn’t believe in God. The short answer, he writes, is this: “It’s just what we Jews do, I might have said; it keeps me connected to a community that I value.”

The longer answer is a defense of, well, pretending: “When it feels like the world is falling apart, I seek refuge in religious rituals — but not because I believe my prayers will be answered,” he writes. “The prayers we say in synagogue remind me that evil has always been with us but that people persevere, survive and even thrive. I take my kids [to synagogue] so that they feel connected to that tradition, so that they know the world has been falling apart from the start — and that there’s beauty in trying to put it back together.”

Religious fictionalists hold that the contentious claims of religion, such as “God exists” or “Jesus rose from the dead” are all, strictly speaking, false. They nonetheless think that religious discourse, as part of the practice in which such discourse is embedded, has a pragmatic value that justifies its use. To put it simply: God is a useful fiction.

Moral character is cultivated and sustained, at least in part, through emotional engagement with fictional scenarios.

The fictionalists I know are maximalists when it comes to Jewish behaviors and minimalists when it comes to God talk. As a synagogue friend once put it, “I don’t believe in God, but I wouldn’t want to disabuse my fellow worshippers of the notion.” And it seems he’s not alone: According to the 2020 Pew study, 47% of Jewish adults say religion is very or somewhat important to them, while only 26% believe in the “God of the Bible.”

My hunch — backed up by zero data — is that Jewish fictionalism is strongest where deep Jewish engagement meets liberalism. By that, I mean in the more observant Conservative (and Conservative-adjacent) congregations and the more liberal Orthodox congregations. A few years back, in a Commentary essay, the attorney Jay Lefkowitz described himself as a “Social Orthodox Jew”— that is, a Jew who practices Orthodoxy but isn’t “really sure how God fit into my life…. I certainly wasn’t sure if Jewish law was divine or simply the result of two millennia of rabbinical interpretations.”

“And so for me, and I imagine for many others like me, the key to Jewish living is not our religious beliefs but our commitment to a set of practices and values that foster community and continuity,” he writes.

For some, this might sound like Humanistic Judaism, a movement with a small but devoted following. But Humanist Jews eschew deism in favor of “human reason and human power.” The key to fictionalism, however, is that God stays very much in the picture, as the “useful fiction” Goff describes or as a sort of organizing principle that sets the boundaries of the community. Hershovitz happily calls it “pretending,” which “breathes life into stories, letting them shape the world we live in.”

Humanism, in that sense, is the more “honest” approach; fictionalism is principled self-deception. Fictionalism is also a rebuke to the “New Atheists” of a few years back, who found religion to be meaningless ritual centered on a non-existent deity. By contrast, Alain de Botton, in his book “Religion for Atheists,” described the kinds of things atheists could actually learn from religions. Religion offers “morality, guidance, and consolation.” Religions build a sense of community, create enduring relationships, offer means to escape the constant appeals of media and consumerism, and create rituals and institutions to address our emotional needs.

“The error of modern atheism has been to overlook how many sides of the faiths remain relevant even after their central tenets have been dismissed,” he writes.

I’ll admit that fictionalism hardly has the appeal of secularism. Getting someone to take on a series of demanding and often inexplicable behaviors in the name of “community and continuity” is a hard sell. But I know of at least one fast-growing and successful Jewish stream that offers fictionalism as a lure: the Chabad-Lubavitch Hasidic outreach movement.

I doubt I could get a Chabad rabbi to agree with me, but the Chabad outreach model (as opposed to the practice of its core followers) is centered on Jewish action, not belief. That’s the impulse behind all those mitzvah tanks and advertisements imploring women to light Shabbat candles. The kids on the street offering tefillin ask if you are Jewish; they don’t ask if you believe in God. In an ethos that is part mysticism and part pragmatism, Chabad holds that doing precedes believing.

“Aside [from] the intrinsic standalone value that each mitzvah has, mitzvah observance can also be contagious,” is how one Chabad rabbi once explained the “one off” approach. “Agreeing to opt in, even just once, can have far-reaching effects. There have been untold thousands of Jews who have made permanent changes in their lives for the better, just because they agreed to try it once.”

He might even agree with Hershovitz, who says that “pretending makes the world a better place.”