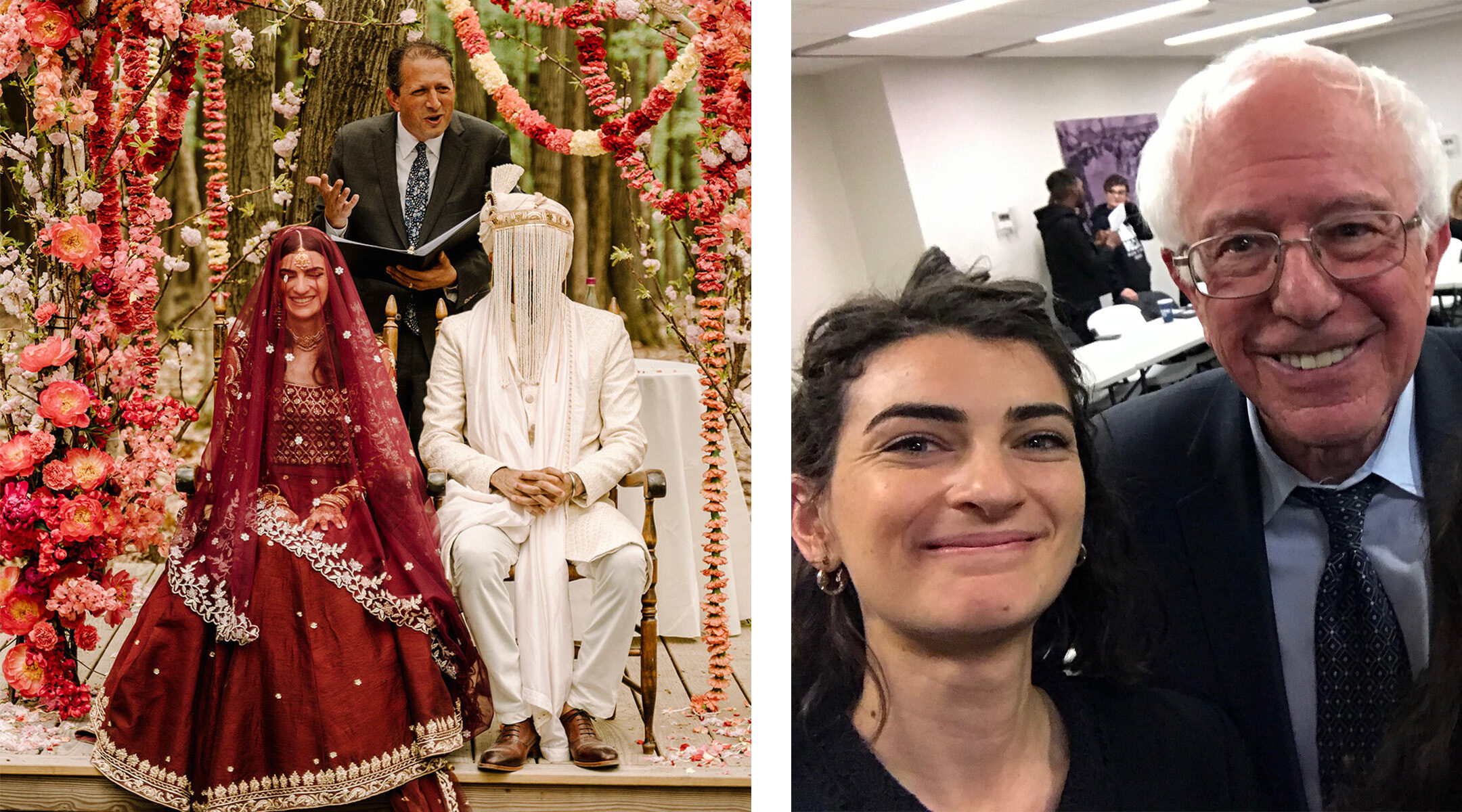 For Mayer, her new job squarely aligns with the values she’s embraced her entire life, which she described as a “commitment to social justice, which was alongside a commitment to Judaism.”

And yet one destination along that path has made the 30-year-old controversial in some Jewish circles: In 2014, she co-founded the Jewish activist group IfNotNow, which calls for the U.S. government to end its support of what it calls Israel’s “system of apartheid” in the West Bank and Gaza.

The group’s intense criticism of the Israeli occupation has drawn a devoted cohort of young Jewish leftists — while also rankling a Jewish mainstream that regards pro-Israel activism as a core Jewish value.

Whether Mayer brings that background to the City Council will be closely watched by the Jewish establishment in New York, home to the largest Jewish community in the country. Some right-wing critics have already bristled at her appointment: Former Assembly member Dov Hikind told the New York Post her hiring was “an embarrassment” because of her left-wing activism on Israel.

But Brooklyn Council member and Progressive Caucus co-chair Lincoln Restler, who is Jewish, said in a statement to the New York Jewish Week that Mayer is “the right person” for the job.

“Emily is a talented and dedicated organizer who has a history of building grassroots movements and coalitions that are rooted in care and justice,” Restler said.

He added: “Emily’s job is focused on transforming municipal government, not international affairs.”

Another Jewish fan is City Comptroller Brad Lander, who created the Progressive Caucus in 2010 and officiated at Mayer’s recent wedding to Democratic strategist Waleed Shahid. He said that she will be a “huge asset to the work of the Progressive Caucus to be a force for policy changes to help working families in New York.” 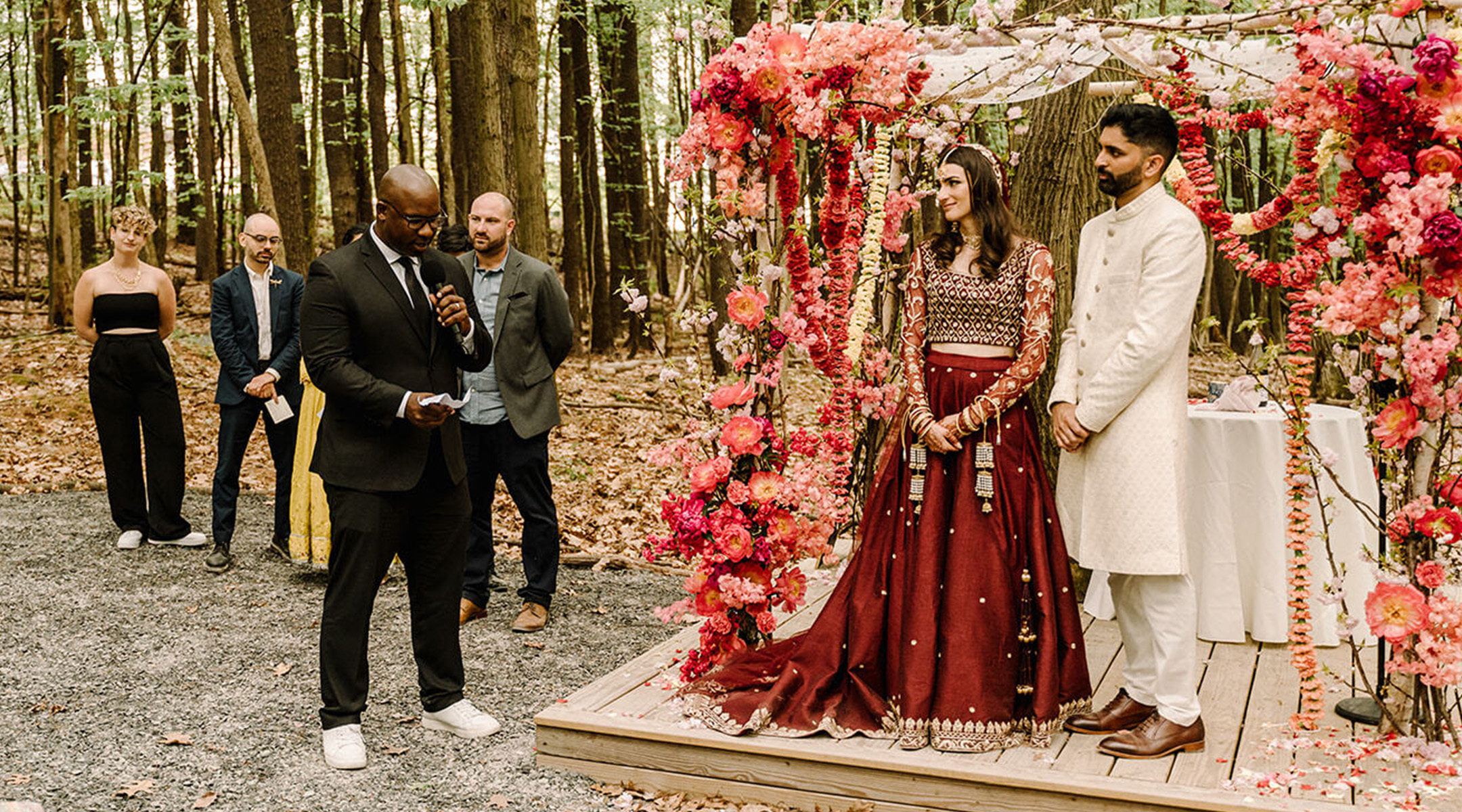 Bronx Rep. Jamaal Bowman took part in the wedding of Emily Mayer and Waleed Shahid on May 14 in Coxsackie, N.Y. (Credit: Justine Castle)

As for her background in fighting for Palestinian rights in Israel, that is “not directly related to the work of the Progressive Caucus,” said Lander, adding that her “work towards ending the occupation, and equality and safety for Israelis and Palestinians alike, is fully within the range of Jewish and progressive perspectives on Israel/Palestine.”

For her part, Mayer declined to get into specifics of her job, which she began only three weeks ago. Among the caucus’ top concerns, she said, are housing, the climate crisis, homelessness and gun violence.

Still, she acknowledged, “2022 is different than 2016. Palestinian rights have made a lot of cultural headway in the last six years. And progressives are clear that progressive values mean standing up for the rights of both Palestinians and Israelis. That is actually part of what being a progressive means in 2022.”

The Progressive Caucus is so excited to announce we have hired @emilyfmayer to be the next caucus director! As a skilled and talented organizer, we can't wait to get to work building an equitable and fairer City for all New Yorkers. pic.twitter.com/33ihDmhQrL

In a phone interview last week, Mayer said her progressive values were formed at Camp Gilboa in Los Angeles, a summer camp under the umbrella of Habonim, the left-wing Zionist movement. “That’s really the beginning of my journey,” said Mayer, whose maternal grandparents fled Nazi Germany in the 1930s. “My camp counselors were always quite progressive for the most part. I grew up learning about the occupation. That was never really hidden from me.”

In 2014, at the age of 22, Mayer became the camp’s director. That same summer, Israel launched Operation Protective Edge, a military incursion into Gaza launched by Israel following the murder of three Israeli teenagers by Hamas-affiliated terrorists. More than 2,100 Palestinians were killed that summer in the Gaza Strip, as well as 66 Israeli soldiers and seven civilians.

These events thrust her into a position to discuss the war and its effects with the campers and staff, many of whom had family in Israel.

“I was planning this activity day with a Muslim summer camp nearby,” Mayer recalled. “They said that because of the war, a lot of their kids don’t feel safe necessarily coming to a summer camp where we were flying Israeli flags.”

Mayer added that she felt torn about how the war in Israel was affecting her in California and realized that what was happening in Israel “was a huge injustice that was endangering both the lives of Palestinians and Israeli Jews.”

After that summer, Mayer said she didn’t want to “be involved in Jewish institutional life anymore.”

“There were thousands of American Jews supporting the war and standing in these huge rallies,” she said. “I came out of that experience feeling frustrated and disillusioned.”

Instead, she took a job as a community organizer in Philadelphia for a student group called Student Power PA, which focused on engaging underserved communities and vulnerable working families in the community.

This was when the seeds of IfNotNow took root, as Mayer and other Jewish friends from Habonim felt that they needed “a political home to register their despair about not only what was happening in Israel and Palestine, but what we were seeing with our family members and community members and how they were supporting violence.”

Mayer said she was invited to a strategy session in New York  by a group of people who called themselves, “almost haphazardly,” IfNotNow — a reference to a famous quote by the rabbinic sage Hillel: “If I am not for myself, who is for me? But if I am for my own self only, what am I? And if not now, when?”

“I met people there who were the first young Jewish people I had met who were committed to making the Jewish community stand by the values we were all taught as young people, but also really had a plan to do it,” Mayer said. “It honestly changed the rest of my life.”

She added that Jewish values are about changing the world and standing up for the oppressed, values she said are contradicted by what has been taking place in the Israeli-Palestinian conflict.

“It was deeply felt that if we could build an organization that could visualize the discontent and a different vision for the Jewish community, we could bring along our family members and community members and older generations of American Jews with us,” Mayer said.

Mayer also said that IfNotNow encapsulated an entire generation of Jews who traveled to Israel and felt that what was happening there was contradicting their Jewish values. “We started to build a new political identity of young Jews, who deeply believe that the safety of Jews was intertwined with the safety of Palestinians,” she said.

For the first few years, IfNotNow’s activities consisted of protests and rallies. Members recited prayers in front of offices of organizations like the Anti-Defamation League, the Conference of Presidents of Major American Jewish Organizations and others. In 2016, Mayer herself was arrested for holding a “liberation seder” in the ADL’s office lobby. 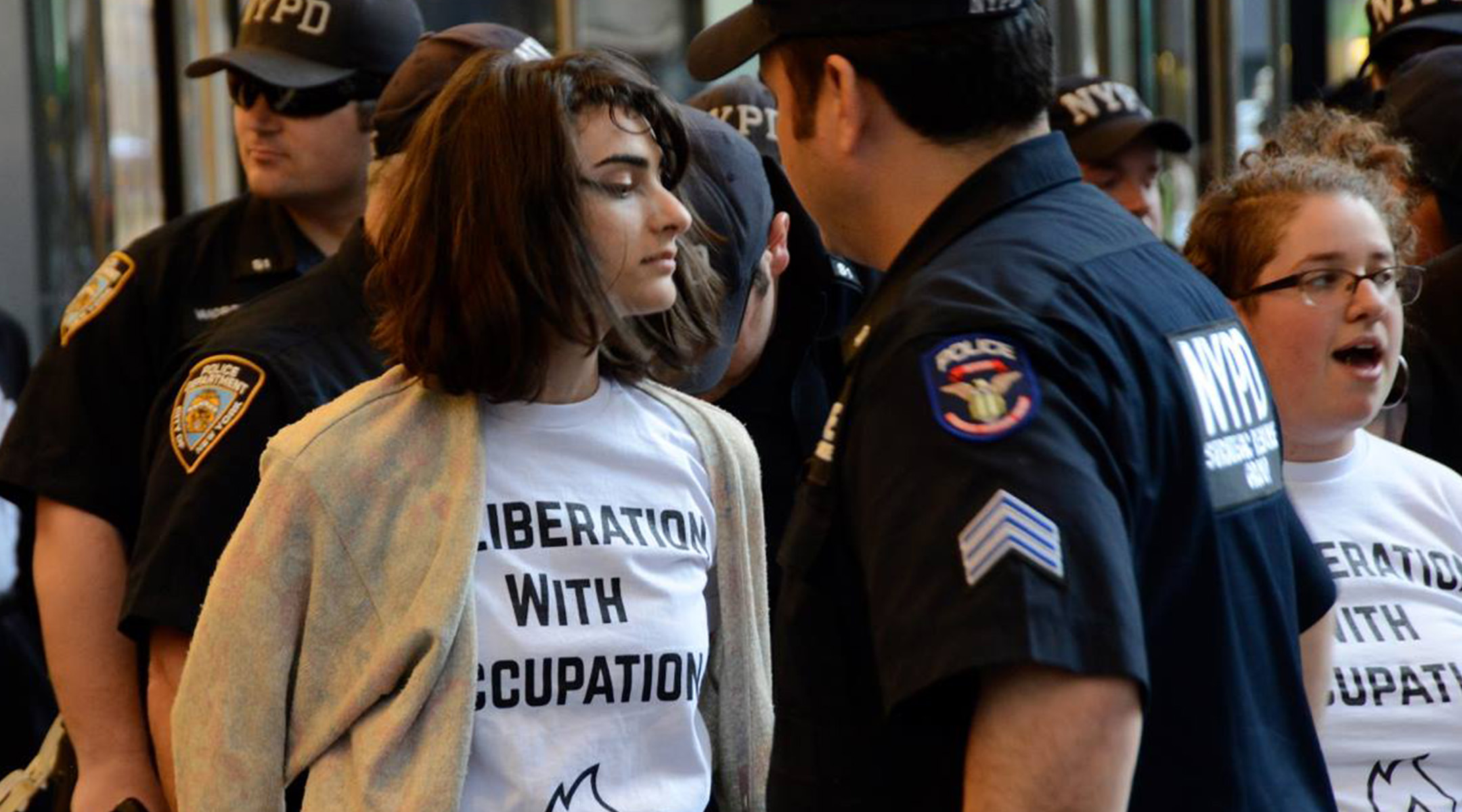 Emily Mayer at an IfNotNow Liberation Seder in 2016. (Facebook/Gili Getz)

In 2018, however, Mayer felt that IfNotNow needed to move in a more political direction, in order to match pro-Israel groups, who had long poured campaign donations and political capital into electing pro-Israel lawmakers and defeating Israel’s critics, on their own turf.

“We saw ways that the Jewish establishment was going to fight The Squad to make sure that they didn’t extend their progressive values to Israel and Palestine,” Mayer said, referring to six of the House of Representatives most progressive lawmakers. “The winds of Congress remain on the side of a blank check to Israel.”

“I came to the realization that not only can we speak truth to power, but we can actually put people who are committed to the movement of progressive values in office,” Mayer said. “This was a very important movement for the progressive movement and for IfNotNow.”

The ADL has criticized IfNotNow for preferring “unrealistic ultimatums” over “meaningful discussion,” and, in criticizing the ADL for “complicity” in human rights abuses, ignoring ADL’s advocacy for a two-state solution. Mainstream Jewish groups are also put off by the group’s neutral stance on Zionism and “statehood” — a stance that, if not anti-Zionist, is far from the robust support of an independent Jewish state held by nearly all large Jewish groups. For some groups, IfNotNow’s noncommittal stance on a sovereign Jewish state enables antisemitism.

Shahid, Mayer’s husband, also recently came under fire for a tweet commenting on how a pro-Israel PAC had boosted a candidate. “Wait until you hear what happened next in next week’s ‘Goy Outsider,’” the since-deleted tweet said, riffing off the name of the politics-oriented newsletter Jewish Insider.

ADL CEO Jonathan Greenblatt then responded to the tweet, “Daily reminder that the extreme right & radical left overlap like a Venn diagram around antisemitism,” Greenblatt said.

Daily reminder that the extreme right & radical left overlap like a Venn diagram around #antisemitism. It’s irresponsible & inappropriate for a progressive leader, or anyone, to tweet this. It's flippant & insulting to the mainstream Jewish community, which @J_Insider serves. pic.twitter.com/8JhD6g9uoe

A letter signed by 47 progressive Jews, including Lander, said that the ADL “wrongfully equated the progressive movement with violent white supremacists and equated Waleed’s lighthearted joke with the actions of violent far-right extremists in Buffalo and Pittsburgh.”

Shahid declined to comment for this article, but Mayer said it was “revealing” how the ADL responded to her husband’s tweet. “It’s no secret that the Jewish establishment is funding or supporting primary challengers to progressive candidates,” Mayer said. “They’re very scared about what kind of change a person like [New York’s Rep. Alexandria Ocasio-Cortez] could bring to the Democratic Party on the issue of Israel and Palestine.”

An ADL spokesperson said in a statement to the New York Jewish Week that the organization “fights antisemitism from wherever the source.”

“Sometimes that angers people because it means ADL needs to call out their friends,” the spokesperson said. “We stand by our decades-long record fighting antisemitism and battling for equal justice for all.”

Mayer emphasized that she is not ignoring antisemitism, saying that it is still “deeply embedded in our society.”

“It’s a scarier time to be a Jew in America than ever before in my lifetime,” Mayer said.  “It’s incumbent on Jews to lead the fight against antisemitism, but that requires us to be precise and judicious about what antisemitism is.”

In her new role, Mayer will work with 34 Council members who are part of the Progressive Caucus. While the New York Post article cites an unnamed caucus member calling Mayer’s hiring “a mistake,” she said that the leadership of the caucus “has been extremely supportive.”

“I’ve had really warm interactions thus far with a wide variety of staffers from the office,” Mayer said.

While Mayor Eric Adams and Gov. Kathy Hochul tend to be moderates, Mayer said the large number of progressive members in the Council show that the city is going through “a transformation.”

“There’s a lot of work to do,” Mayer said. “There is a responsibility for progressives to strategize together to figure out what we can win.  I feel very humbled and honored to get to work on these issues.”